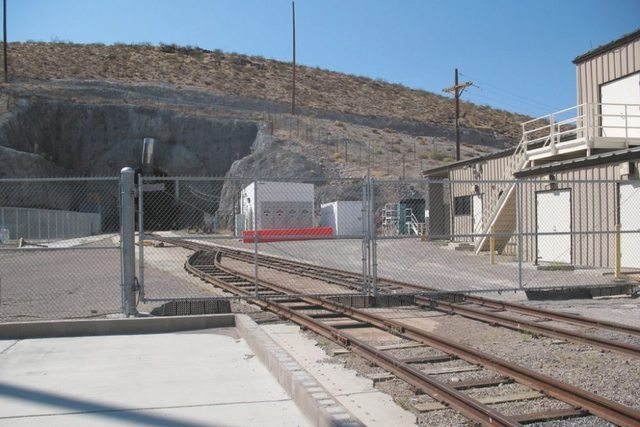 A fence surrounds the north entrance to the 5-mile tunnel that loops through Yucca Mountain, 100 miles northwest of Las Vegas. (FILE, PHOTO COURTESY OF THE DEPARTMENT OF ENERGY)

Completing safety studies and setting up a license document network for the Yucca Mountain Project will take a full year and use all $11.1 million of the money previously budgeted for the now-shuttered project 100 miles northwest of Las Vegas, the Nuclear Regulatory Commission’s staff said Monday.

The NRC initially said the work could be completed in six to eight months for $6.5 million.

“This limited funding will not allow the Commission to complete all the steps necessary to make a licensing determination as to a construction authorization for the Yucca Mountain repository,” the NRC staff wrote, arguing that the remaining funds “should first be devoted to completion of the remaining” safety reports and environmental documents.

The agency’s assessment was in paperwork filed Monday in response to the commission’s Aug. 30 order to restart licensing proceedings for the project. The order was compelled by an Aug. 13 federal appeals court ruling that directed the NRC to “promptly continue with the legally mandated high-level waste licensing process.”

The ruling by the U.S. Circuit Court of Appeals for the District of Columbia came at the urging of pro-Yucca factions in South Carolina, Washington state, rural Nevada counties and nuclear power supporters that were upset that the Obama administration halted the program in 2009.

Bob Halstead, executive director of the Nevada Agency for Nuclear Projects, said he will not make definitive statements on the matter until he talks with Nevada’s nuclear waste legal advisers on Wednesday.

“We think the NRC staff filing overall is very supportive of the position we took,” Halstead said.

He said that to make intelligent decisions opposing the Department of Energy’s license application for constructing a repository at Yucca Mountain, the state needs to review completed safety evaluations and an environmental impact statement supplement, and have access to a searchable network for license documents.

Also, Halstead said, Nevada leaders must insist that any licensing hearings be held locally and not at NRC headquarters in Maryland.

“If transparency is a goal here, then having these hearings in Las Vegas is really important,” he said.