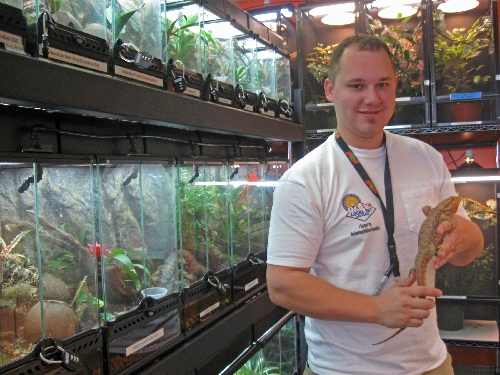 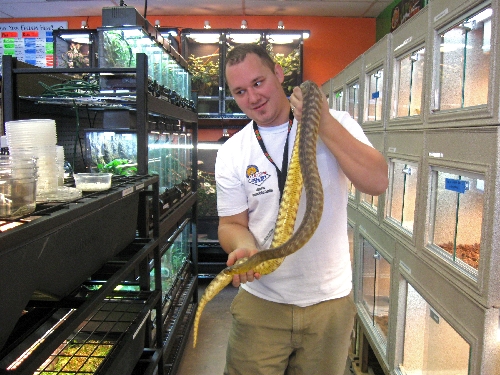 Husband and wife Chad and Darci New opened their business, Reptiles-N-Reefs, out of a long time passion for collecting cold-blooded creatures.

“Henderson doesn’t really have a spot where somebody can go buy healthy, quality reptiles, fish, coral and supplies at an affordable price,” Chad New said.

Like with any new business, New has taken a risk by opening the store at 629 N. Stephanie St.

“It took everything we had to make our dream become a reality,” New said. “I’m hoping the community will support a mom-and-pop store.”

New, a union electrician by trade, was unemployed for a year. Instead of continuing to search for work, he decided to use his passion for reptiles as inspiration for a business .

New knows the exact amount “down to the penny” of what the store needs to earn each day to break even.

“That’s to pay for rent, power, Internet and telephone,” New said, ” and then pay myself something. Right now, I’m working for free.”

In his first week, New said, he didn’t lose any money.

“They say new businesses will lose money in the first three years of business,” New said. “We can’t afford to do that.”

“I would go camping and bring back a chest cooler of reptiles,” New said. “I would release them, of course.”

His grandmother, Marie Corn, let him collect most reptiles.

For the most part, New housed lizards and live food, which included crickets.

“They got used to crickets roaming around the house,” New said.

Corn said one of the worst experiences was when a box of live crickets was delivered to the house.

“I didn’t know the box wasn’t tightly sealed,” Corn said. “I was watching TV and looked up and the whole wall was covered in brown with crickets.”

Until the day she moved out, Corn found dead crickets that had escaped.

For the past five years, New has been a reptile breeder specializing in chameleons. He continues to breed and sell chameleons over the Internet.

As a breeder, New established connections with other breeders and supply companies that helped when he decided to open the store.

On Facebook, people can see a chronicle of the store’s journey, from obtaining the store on Nov. 16 to getting it ready for its opening on Dec. 30.

“I probably put in 20 hours a day,” New said. “I had some long days and sleepless nights. What hair I have left is going away or turning gray .”

Many of his reptiles hail from around the world, including a python from Australia, geckos from Iran and tortoises from South America and Greece.

“These are the tortoises that grow to be a hundred pounds,” New said. “It’s a great gift because you can pass it down from generation to generation.”

New’s specialty is the variety of chameleons, some of which he said can no longer be exported from their countries of origin.

Even though many of his animals are world travelers, most were bred and born in Henderson.

New also has snakes in his collection, despite growing up without them as pets.

“I think he would occasionally sneak them into his room,” Corn said.

When New opened the store, Corn said she would help out if he ever needed it.

“Except if people want me to get them a reptile,” Corn said. “The shop becomes a self-serve store then, because there is no way … I am reaching in there and taking out a snake. Maybe a tortoise.”

“Most of the fish are bred instead of taken from the wild, which is awesome,” New said.

Every two weeks, New plans to drive to California to pick out the best selection for customers.

“I make sure they are healthy so when you get home, they don’t die in your tank,” New said. “It’s good to go down every two weeks, because some things are seasonal and I’m able to get new and exciting things.”

The store offers supplies for the novice or advanced collector.

“It is all equipment that I would use,” New said.