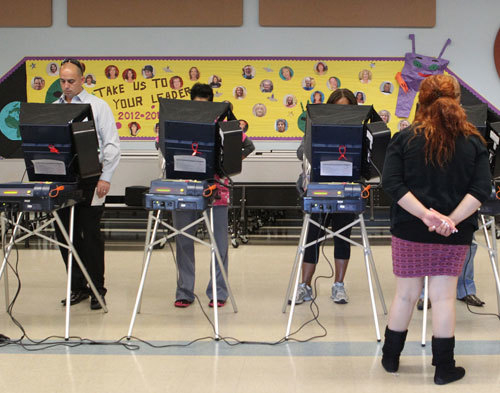 Really, people? Is this the best you can do?

According to the Secretary of State’s office, just 11.5 percent of voters have thus far cast ballots during early voting, absentee voting or by mail-in ballot. That translates to 128,652 of the 1.1 million people who’ve bothered to register to vote in the first place.

Here is Clark County, just less than 8 percent of the 775,950 cast ballots at early voting locations. That figure rides to 9.9 percent if you include absentee and mail-in ballots that have been returned thus far. Washoe County — which features a candidate-heavy mayor’s race in Reno — got to 11.6 percent with early, mail and absentee ballots counted.

If history is a guide, that’s bad news for participation in this election.

Back in the primary election in 2010 — another off-year (or non-presidential election) 13 percent of people cast ballots during early voting, and another 14.6 percent came out to vote on election day. (That doesn’t include mail or absentee ballots, by the way.) But that year saw heavier turnout on the GOP side, as a bevy of candidates fought to see which Republican would get to challenge Senate Majority Leader Harry Reid.

To be sure, Republicans are leading participation in this year’s elections, too: 52 percent of all votes cast thus far came from the GOP, and just 36.5 percent from Democrats. Minor parties and non-partisan voters made up the rest, at 11.2 percent.

In 2006 — with a fairly sedate Senate contest between incumbent U.S. Sen. John Ensign and presidential son Jack Carter did little to energize the electorate, 12.3 percent of voters turned out early, and 15.1 percent waited to cast ballots until primary election day.

So if we assume the turnout tomorrow will slightly exceed what we’ve seen during early voting, say 12 or 13 percent, we’d still be looking at the smallest turnout since the new century began, at least. A combined turnout of, say, 25 percent would mean just one out of every four registered voters bothered to cast a ballot, or 288,381 actual human people statewide.

We can do better, and we should do better. There is still time to turn this around. If you are registered (and you can tell, because they would have sent you a sample ballot in the mail), take the time to educate yourself and get out and cast a vote tomorrow. You owe it to your country and your state to have a say in the people who are going to led them.

Remember, elections are won and history is made by those who show up. So show up tomorrow, will you?

And, if you’re going to stay up late to see what happened, be sure to keep refreshing the Review-Journal’s website for the latest numbers and stories. Follow me on Twitter for breaking updates. And, if you can stay up late, tune in to 8NewsNow, where we’ll have full results and coverage at 11 p.m.