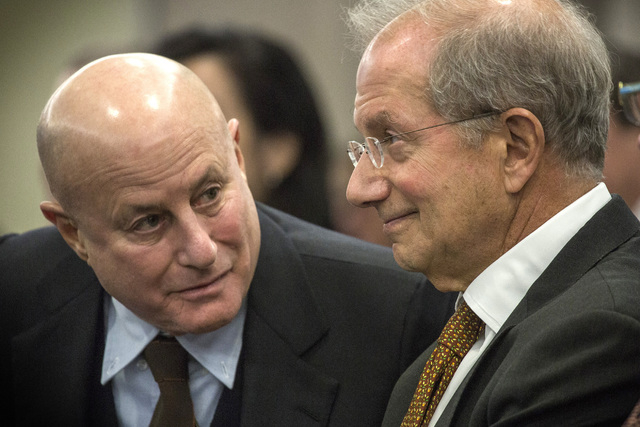 Over the past 18 months, the lottery provider spent $7.6 billion to acquire the gaming industry’s No. 2 and No. 3 slot machine manufacturers.

Last month, Scientific Games said it will move its corporate headquarters from New York City to offices off the 215 Beltway. The company will consolidate its substantial U.S. manufacturing operations in Las Vegas by the end of this summer.

More than 1,500 employees of the company’s 8,500-person workforce will be located in Las Vegas. Scientific Games expects to add another 200 Las Vegas manufacturing positions over time.

The corporate move was also the gaming industry’s worst-kept secret. The deal was sealed when the governor’s economic development operation offered the company $2.5 million in incentives to build a 40,000-square-foot building in Las Vegas, sweetening the pot a week ahead of the announcement.

The company has 10 divisions that touch all aspects of legalized gambling — lotteries, slot machines, table games, sports wagering, management systems and interactive gaming. All but two of the divisions will be based in Las Vegas. The lottery headquarters will remain in Georgia, and the interactive group will be based in Chicago.

While Scientific Games is growing, IGT is shrinking in Nevada.

The slot machine giant is in the process of being sold for $6.4 billion to Italy-based lottery conglomerate GTECH Holdings. The new, yet-to-be-named company will be headquartered in the United Kingdom but will be listed on the New York Stock Exchange.

The name IGT is not expected to disappear, and the company plans to keep its manufacturing facilities in Las Vegas and Reno. But IGT’s Nevada corporate presence will be greatly reduced.

The GTECH-IGT deal is still awaiting shareholder and regulatory approval and is expected to be completed by April.

“The results clearly highlight that this was a difficult product sales quarter. We expect Scientific Games to gain market share, particularly in the international markets, where IGT continues to suffer,” Beynon said.

“Scientific Games should benefit from the ongoing disaster at IGT and take market share over the next few quarters,” McGill told investors. “IGT was once the market leader, but management mishaps and lacking content have left it in a vulnerable position from a competitive standpoint.”

With the WMS purchase, Scientific Games acquired the company’s offices and production facility in the McCarran Center south of Sunset Road. WMS’ primary slot machine manufacturing plant in Waukegan, Ill., a one-hour drive north of Chicago, will be closed with the jobs transferred to Las Vegas.

Scientific Games said that the Bally acquisition was expected to result in $235 million in corporate cost savings by the end of 2016. That includes a 21 percent cut in non-manufacturing positions the company spelled out in a Securities and Exchange Commission filing last September.

Scientific Games also brings to Nevada its largest shareholder, colorful billionaire investor Ronald Perelman, 72, who is also the company chairman. Perelman, a New York-based financier who owns more than 30 percent of Scientific Games, has long been interested in the gaming industry.

Outside of gaming, Perelman’s investment fund owns a large stake in cosmetics giant Revlon. Currently ranked 32nd on the Forbes 400, Perelman made light of his made-for-tabloid personal life when he was licensed by Nevada gaming regulators in 2013.

“I expected you to ask me about my divorces. I’m glad you didn’t,” Perelman told the Gaming Control Board. “I’m a specialist (on prenuptial agreements).”

Scientific Games provides products to 39 of the 44 U.S. state-run lotteries and to 50 lottery countries.

The company’s presence in Nevada, along with GTECH’s purchase of IGT, means lottery companies control Nevada’s slot machine industry. And the Silver State doesn’t even have a state lottery.

But for those hoping Nevada will add a lottery, don’t hold your breath.