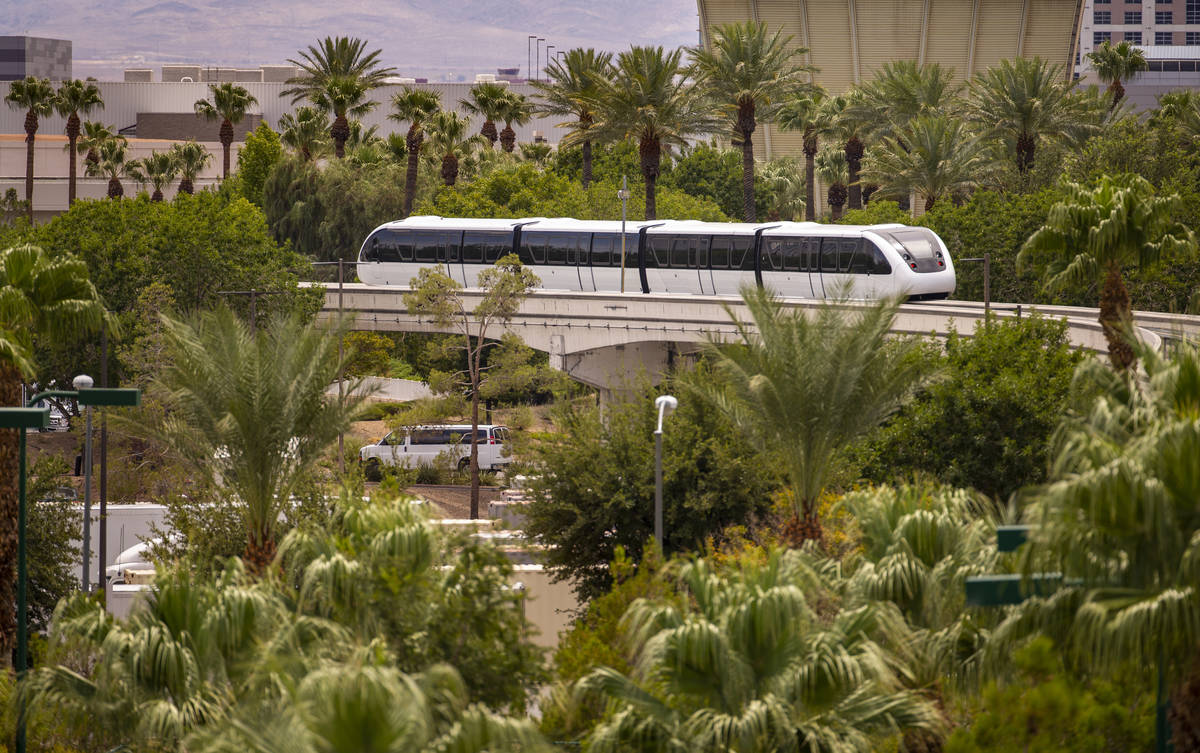 A train makes its way towards the Westgate Station along the Las Vegas Monorail system on Sunday, Aug. 18, 2019, in Las Vegas. (L.E. Baskow/Las Vegas Review-Journal) @Left_Eye_Images

One aspect of the Las Vegas Monorail system that has been lost in the debate over whether the Las Vegas Convention and Visitors Authority should have acquired it for $24.26 million is its potential as an advertising vehicle.

Before the system started carrying passengers in 2004, executives hired Patrick Pharris and his now-defunct Promethean Partners LLC to develop a concept to provide moving billboards and monorail station sponsorships to supplement the farebox revenue the system was expecting to generate.

Pharris created a concept he called “total brand immersion,” and one of his colleagues later dubbed it “transpertainment.”

“In 2000, I was asked to consult with the developers of the monorail to find a way to generate at least $6.5 million a year from something other than the farebox revenue,” Pharris explained. “They needed to show this amount was viable, in order to get a AAA bond rating and bond insurance. The concept was obvious, at least to me: If the monorail was going to transport 19.7 million riders per year around the most-visited city in the world, and those riders-consumers, would be in a captive environment (stations and trains) for 4-14 minutes, then the monorail would be one of the most valuable experiential marketing platforms on the planet.”

Pharris was asked by the original lead bond underwriters, Solomon Smith Barney, to join the monorail’s investment roadshow team to explain total brand immersion to bond raters, insurers and buyers. The company got its AAA rating.

He persuaded Nextel to build the two-story elevated Las Vegas Convention Center station straddling Desert Inn Road and make it an office showcase that LVCVA President and CEO Steve Hill raved about at Tuesday’s board meeting, at which members voted 12-1 to approve the monorail acquisition.

Pharris and Promethean were let go in 2007 when the economy and Las Vegas visitor volume headed south. The monorail company’s leadership felt other companies could replicate Pharris’ model.

But in a bid to keep some of the sponsorship and marketing magic of the past, Las Vegas Monorail President and CEO Curtis Myles got back in touch with Pharris and his new company, Pharris Media, in fall 2019. Pharris started developing a wrap and sponsorship program for the monorail with a new emphasis on the monorail’s zero-emissions environmental record.

Just as Pharris was about to roll out some potential clients, COVID-19 hit. The monorail was shut down in March; the company’s death spiral began, and bankruptcy became a real option.

That’s when Hill and the LVCVA entered the picture. Some of the LVCVA’s biggest customers — the major conventions and trade shows — love the monorail and how it can drop off thousands of conventioneers on the Las Vegas Convention Center doorstep. Hill sees the environmental value of taking thousands of cars off city streets during the big shows.

Now, the question becomes, would monorail train wraps and station sponsorships be in play to become an LVCVA revenue source? Before the monorail closed down, Pharris was on the verge of signing some sponsorship deals. He wouldn’t name the companies but said they’re from familiar industries — telecommunications, automotive and beverages.

With the LVCVA in charge, Pharris’ client list could expand to include those with special promotional needs during specific shows — maybe tech and gadget companies during CES, for example.

One of the LVCVA’s primary reasons for acquiring the monorail was to remove a noncompete agreement that would have prohibited competing transit systems from operating east of the Strip against the monorail. The Boring Co. and its underground transit system may hold the key to solving some of Southern Nevada’s transportation woes.

Would it be possible for Pharris to trade in monorail train wraps for wraps on Teslas, The Boring Co.’s vehicle of choice? Is there potential for themed, revenue-generating underground Boring stations across the valley?

It sounds as if LVCVA leaders will have at least a decade to contemplate that.

Hill said the LVCVA isn’t interested in investing $200 million — actually, it may be closer to $180 million with nine monorail train sets costing $20 million apiece — to upgrade the fleet in eight to 10 years. Maybe that changes if the monorail trains are suddenly viable advertising revenue generators.

Hill has said he would be receptive to alternative transit modes along the monorail track infrastructure. Is it too crazy to envision converting the monorail center beam to flat road surfaces that Teslas could use in self-drive mode?

That certainly could preserve the convenience of linking the city’s major convention facilities on one pathway and could, if extended, provide a new and easy direct route to Allegiant Stadium.