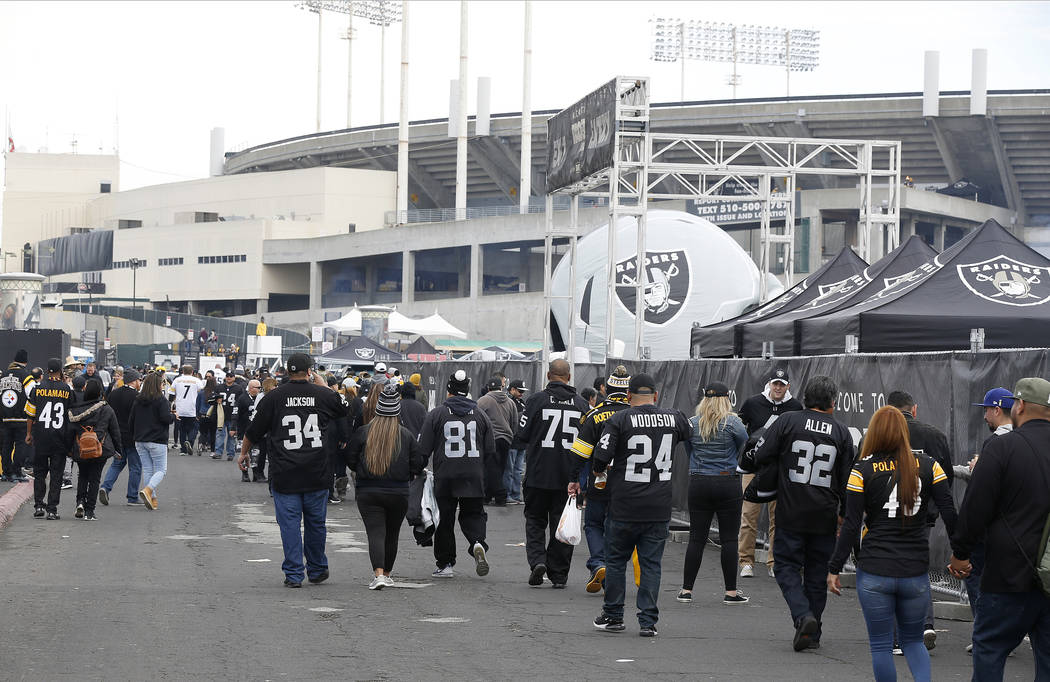 Fans tailgate outside of Oakland Alameda County Coliseum before an NFL football game between the Oakland Raiders and the Pittsburgh Steelers in Oakland, Calif., Dec. 9, 2018. (D. Ross Cameron/AP) 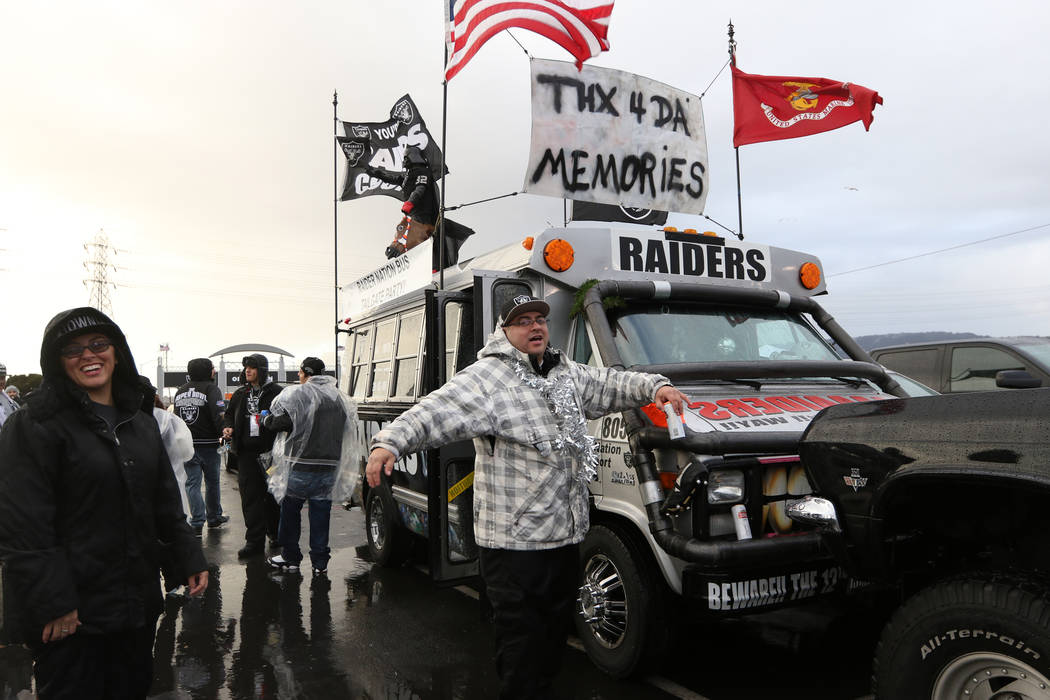 Andy Coronado shows off the fan bus he drove from Stockton, Calif., to tailgate in before what could be the last NFL game the Oakland Raiders play in the Oakland-Alameda County Coliseum in Oakland, Calif., Dec. 24, 2018. (Heidi Fang/Las Vegas Review-Journal) @HeidiFang 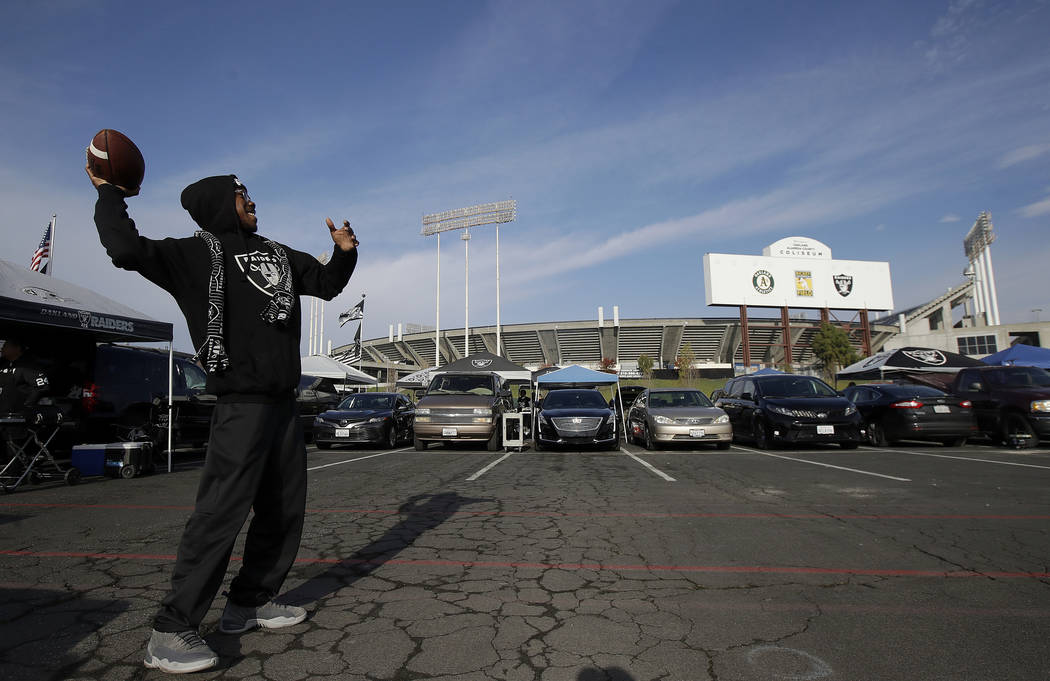 A Raiders fan throws a football as people tailgate outside Oakland Coliseum before an NFL football game between the Oakland Raiders and the Pittsburgh Steelers in Oakland, Calif., Dec. 9, 2018. The Raiders will move to Las Vegas in 2020 where they will play a new $1.8 billion, 65,000-seat stadium. (Jeff Chiu/AP, File)

That slight chill in the 110-degree air can only mean one thing: It’s almost football season.

A year from now, Allegiant Stadium will become its own tourist attraction and draw thousands of people to Southern Nevada to see what indoor football looks like in the entertainment and sports capital of the world.

The Raiders have already made it clear that a Las Vegas tailgate experience is a priority for the fans who come from far and wide to witness NFL football in our valley. Team officials have said on numerous occasions that the fan experience is key.

“For tailgating the main thing is having somewhere to park where we can spend time with friends and family, cook and enjoy drinks,” Raiders fan Steven Lee emailed me. “And of course somewhere within a reasonable distance of the stadium. So far I haven’t heard of anything being close enough for this.”

Tailgating is part of the Raider Nation culture, right? What do you Raiders fans want in the Las Vegas tailgating experience? Email me at rvelotta@reviewjournal.com or give me a call Wednesday at 702-477-3893. Leave a message with your name. Also wanting to hear from you, UNLV.

A year ago this week, the team unveiled a stadium parking plan it has said is still a work in progress. It includes four offsite parking lots capable of accommodating up to 11,925 vehicles. The plan doesn’t include a fan favorite location, the Bali Hai Golf Club, about a quarter-mile southeast of the stadium. No additional details about how tailgating would be accommodated have been provided.

But fans clearly want more than just a parking lot.

“No. 1, room to breathe. I hate being packed in tighter than a cheap flight. No. 2, no dumb rules like, ‘No throwing footballs,’ or ‘No loud music.’ No. 3, the ability to buy my spot for the season and be done with it. No. 4, a reliable shuttle cart to the stadium from wherever we may have to park. And No. 5, a Raiders-fans-only lot. Keep the hostile visitors out,” he said.

A key takeaway from No. 5: Because NFL fans from across the nation will be circling the date on their calendars for when their teams play in Las Vegas, just as they do when National Hockey League teams play the Golden Knights, organizers should plan for a tailgating location exclusively for the visiting team.

Thirty-four-year Raiders fan Vince Carlon, who goes by “Raider Mooney,” thinks downtown Las Vegas and the Fremont Street Experience would be a great place for fans to congregate before games. He was dazzled by the festivities of a pep rally leading up to the 2013 Las Vegas Bowl that featured quarterbacks from his hometown of Bakersfield, California — Cody Kessler of USC, now a backup quarterback with the Philadelphia Eagles, and Derek Carr of Fresno State, the Raiders’ current starter.

“It has everything you could ask for, lots of space for people to hang out with each other, stages for music or appearances, the big screen,” Carlon said.

I mentioned to him that the downtown resort operators have big plans for watch parties and special events now and when the Raiders roll into town.

He plans to make the trek to Las Vegas from Bakersfield for games, roughly the same distance as Oakland.

A few Raiders fans disappointed that their team is leaving Oakland tweeted that Raider tailgating will die when the team relocates.

Maybe some of the old-school traditions will go away, but they’ll be replaced with a re-energized Vegas vibe. Like everything Vegas, it’s going to be a party that can’t be duplicated anywhere else.

As for the Oaklanders who disparage all things Vegas — and will have lost the NBA Golden State Warriors as well as the Raiders by next year — a word of advice. Treat your Oakland A’s baseball team well. Support that team and its plans for a new baseball stadium.

If you don’t, there’s a group in Henderson that’ll gladly take the team off your hands.