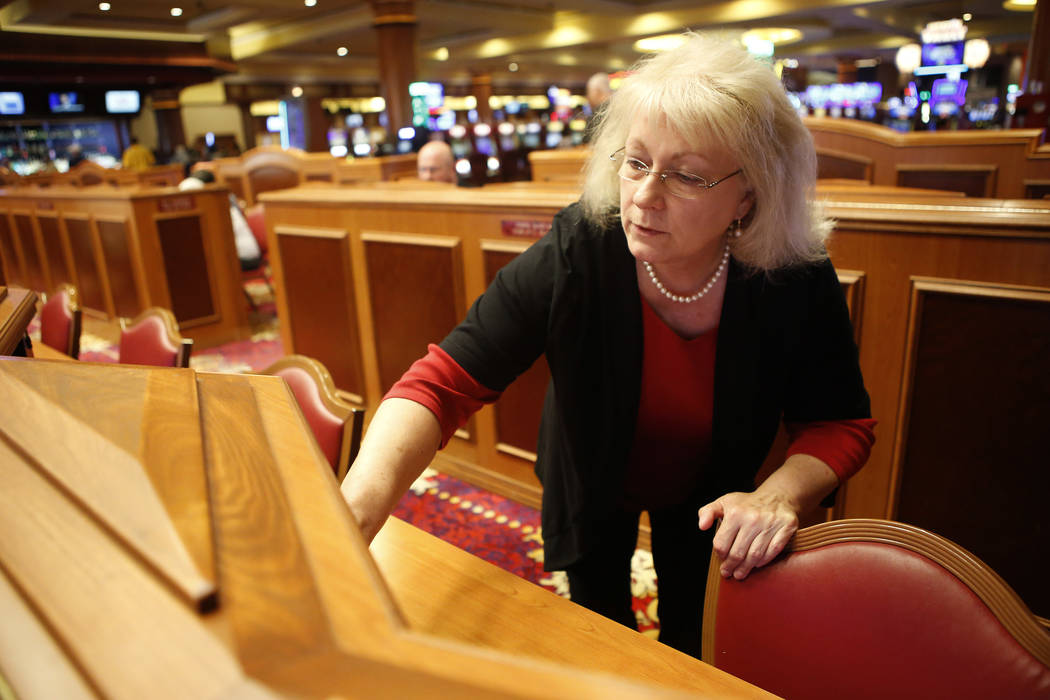 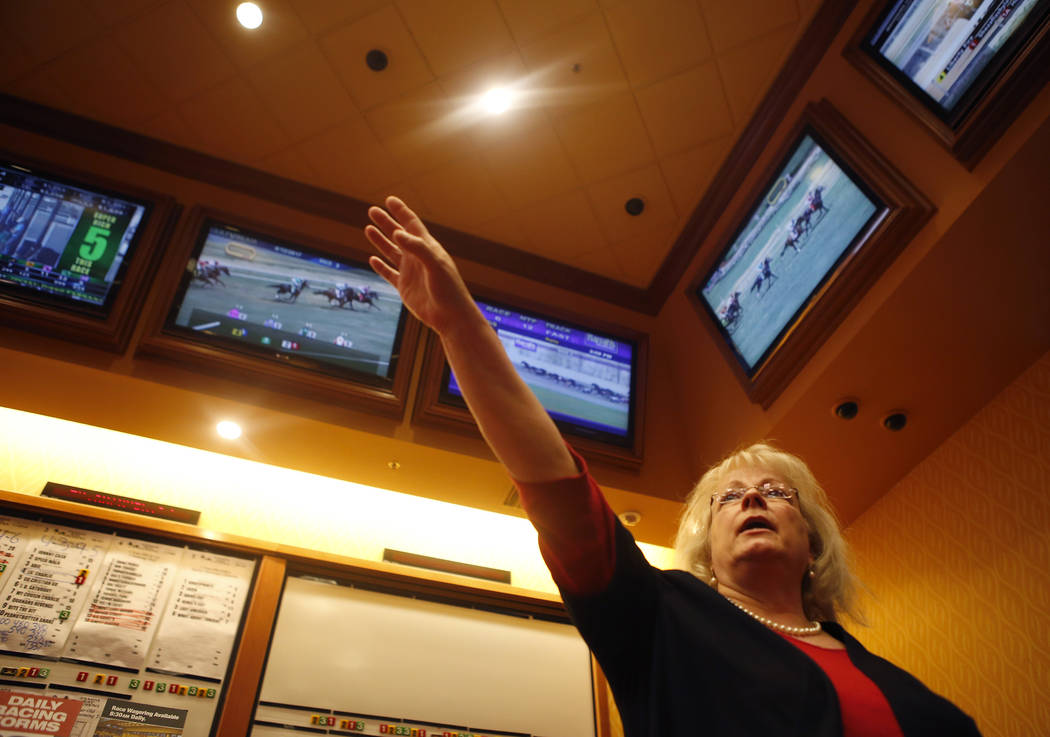 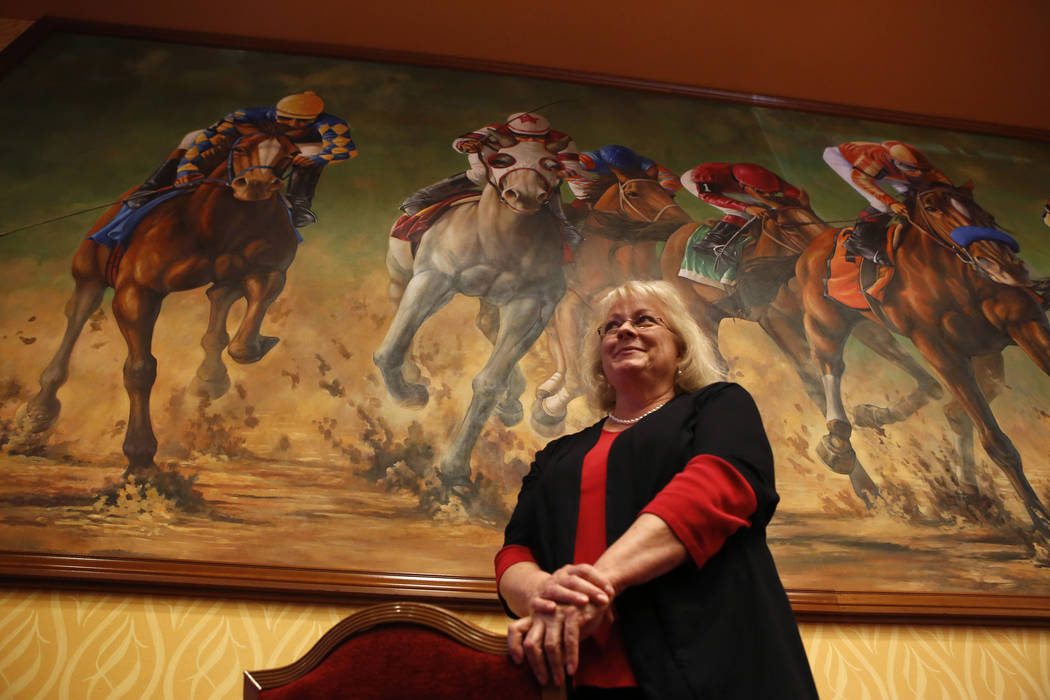 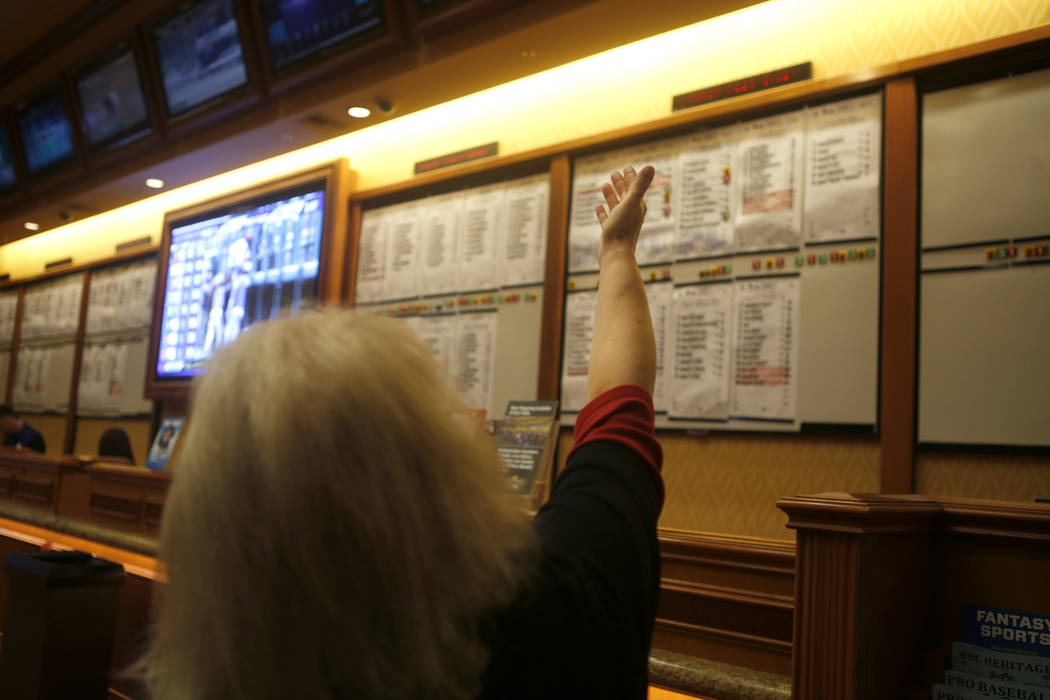 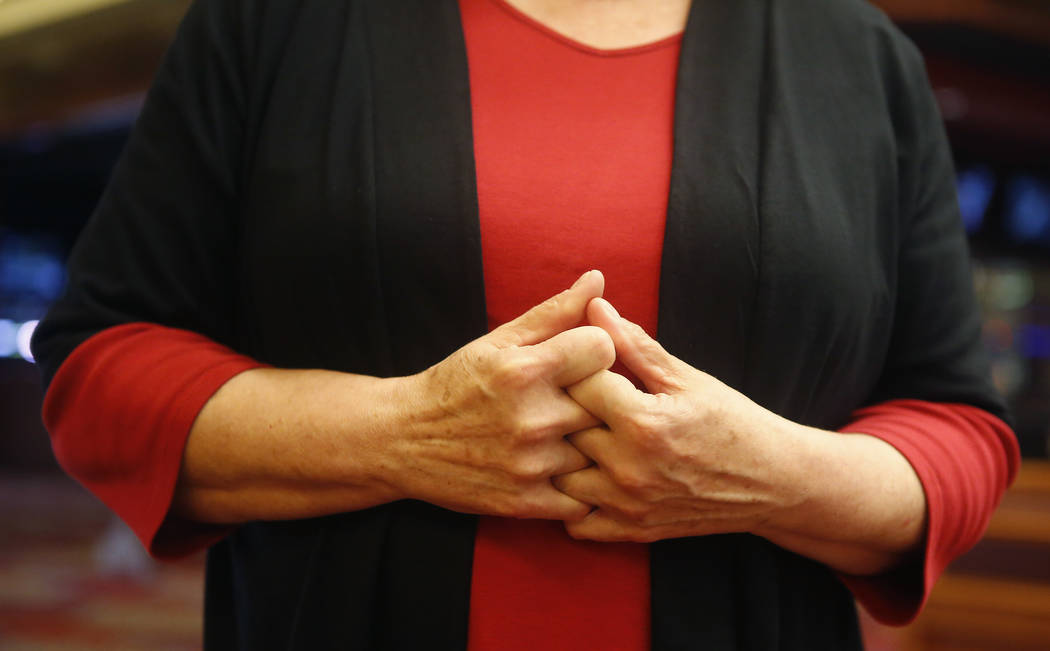 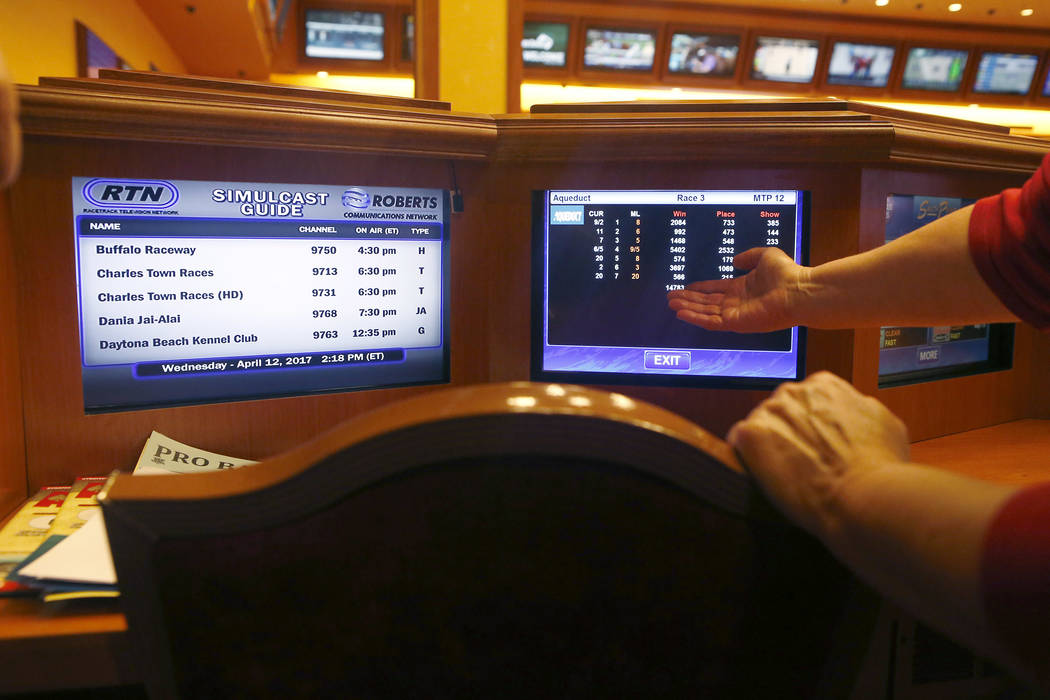 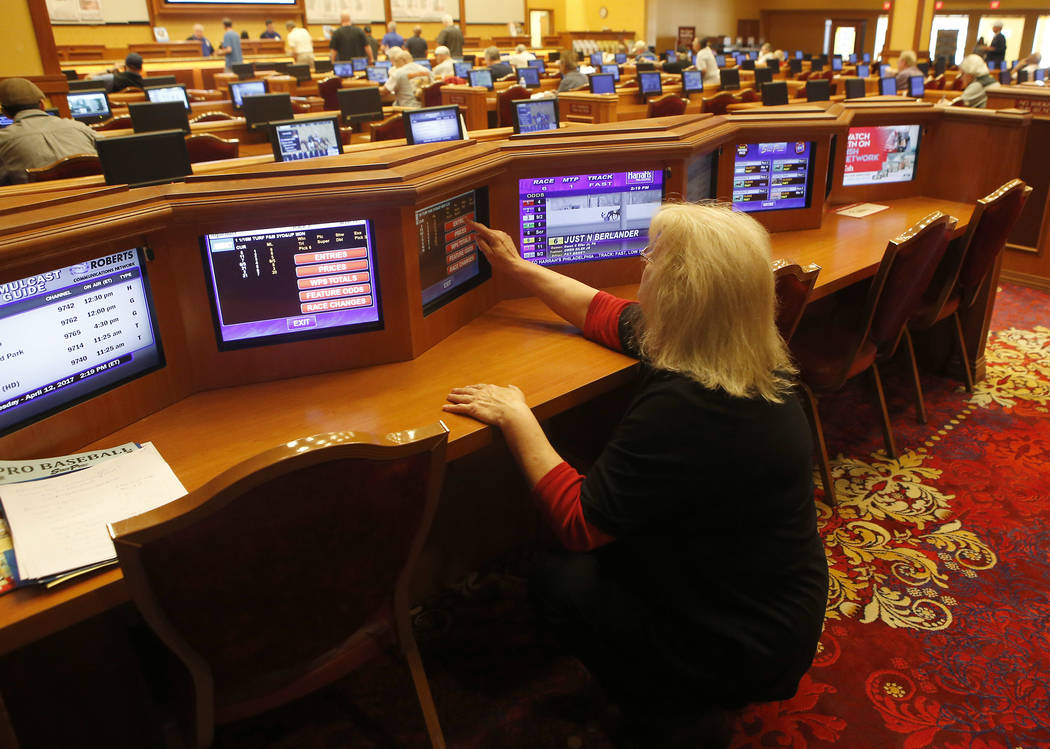 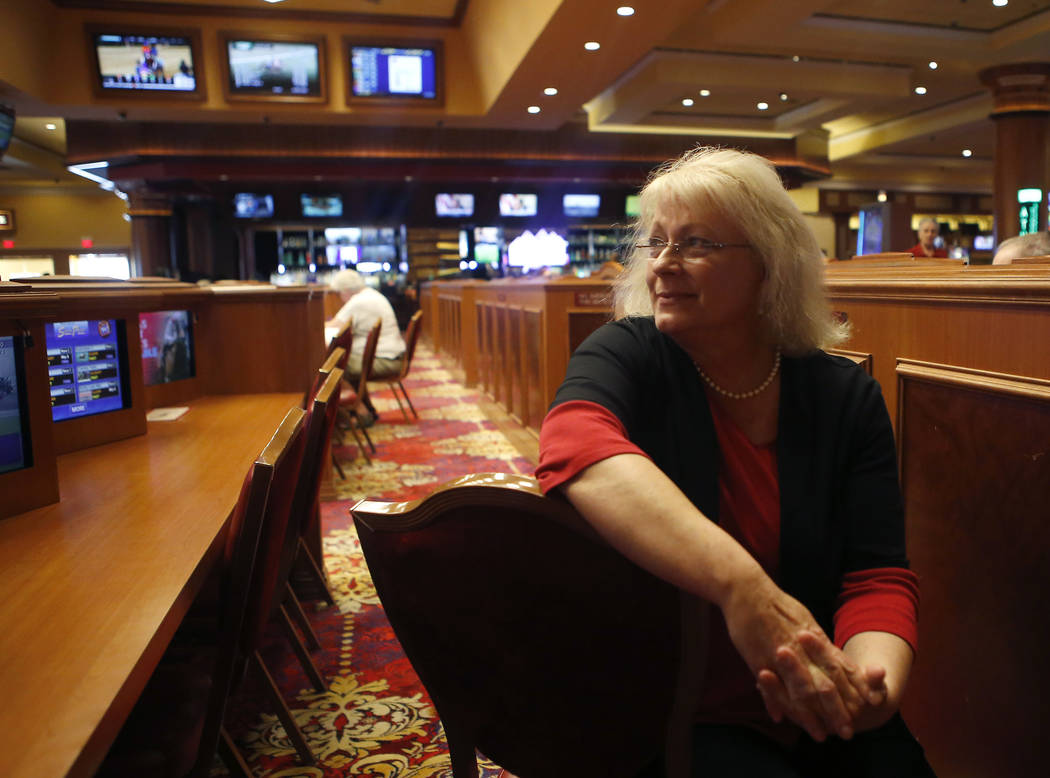 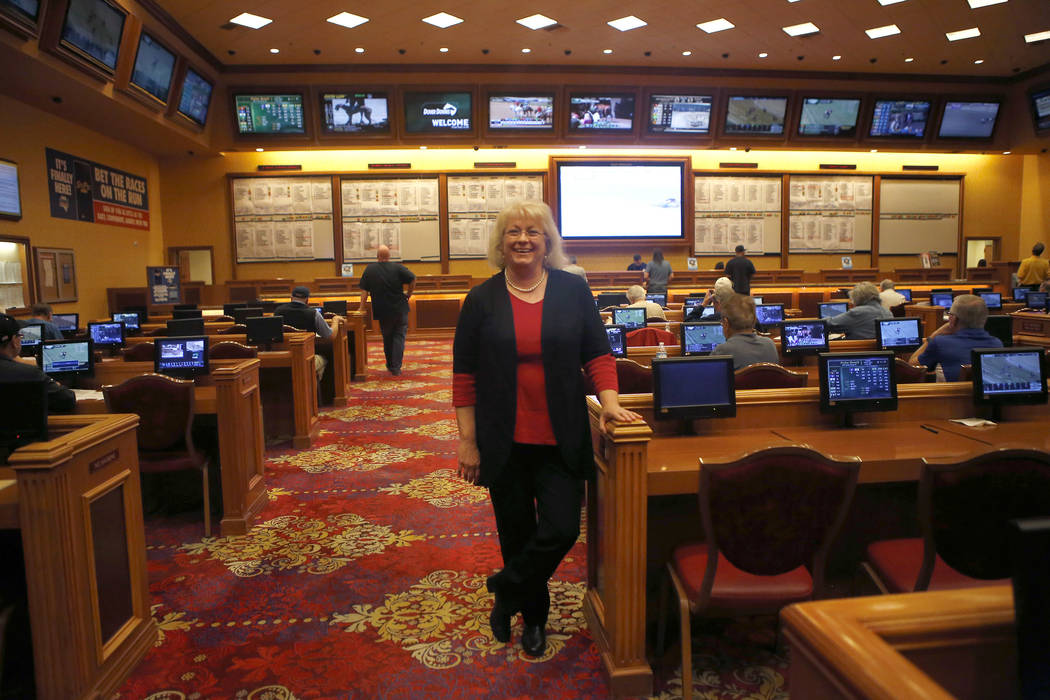 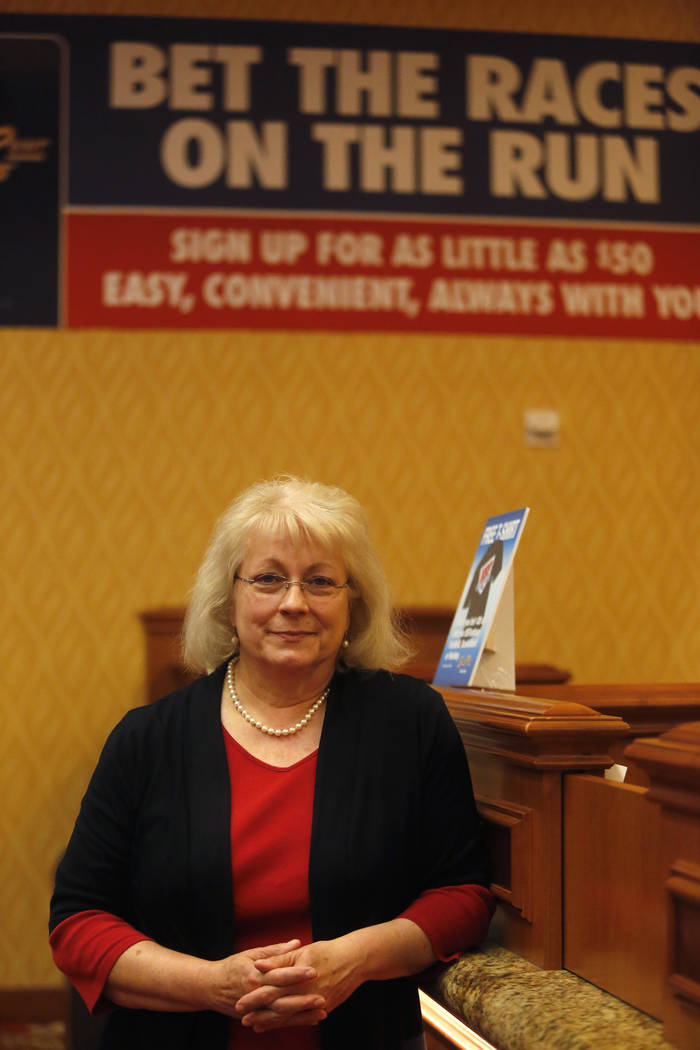 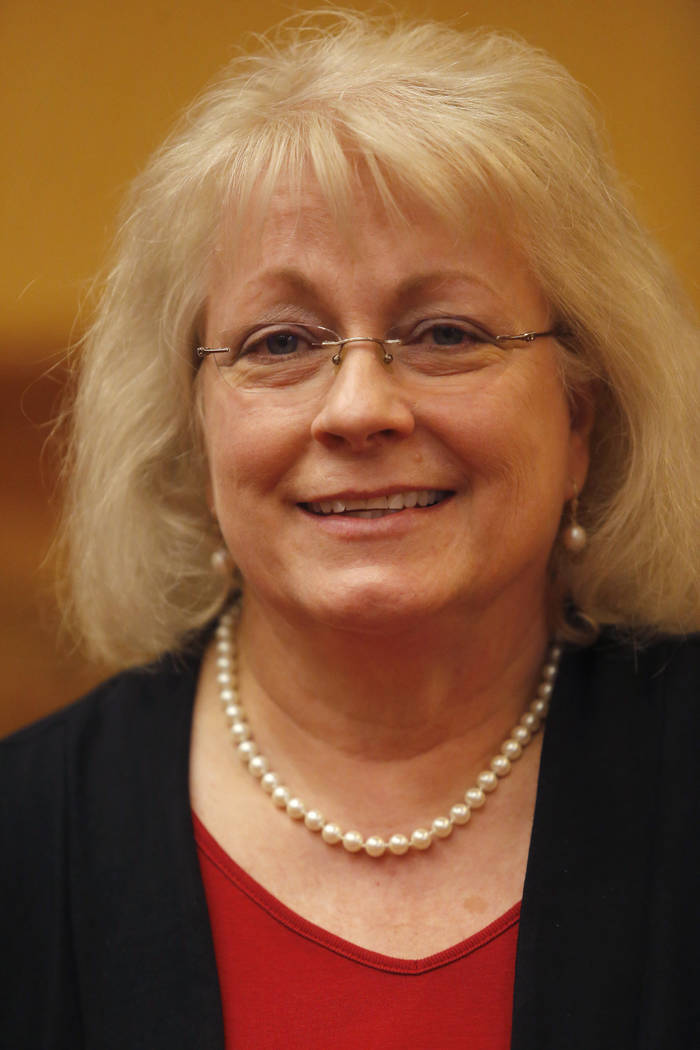 Shortly before noon on a typical Wednesday morning at the brightly lit South Point horse racing book, roughly 40 men are studying the day’s competitions in front of computer terminals.

Some have coffee cups alongside the notebooks and race information sheets scattered at their desks as if preparing for an exam. Were it not for the TVs above, it would feel like a library.

Mainly in their 60s and sporting eyeglasses and silver hair — or no hair — the men come for a few hours each day to follow their favorite track. Aqueduct on the East Coast in the early morning, then Churchill Downs in the Midwest.

Many of the South Point’s horse betting clients come five days a week, some seven days a week. Occasionally a bettor will be joined by his wife at the one of the seats. Otherwise, it is very much an older man’s world here.

The book — the only separate horse racing book in Las Vegas — is run by Mary Jungers, a 36-year betting industry veteran.

Jungers, who has been running the South Point race book since it opened in 2005, knows the horse racing lingo as well as anyone.

She is just as familiar with the regulars who come up to the windows to place their bets. They sometimes affectionately call her “boss.”

“How are you doing today, Ralph?’’ Jungers says in a clear voice as she passes an older man preparing his bets in the shadow of a massive painting of half a dozen horses and jockeys charging forward. Ralph replies in kind.

“The toughest thing I run into is the different personalities. I try to get along with everybody,’’ Jungers says.

Perhaps it is not surprising that South Point still took the unconventional step in 2010 of separating its race book from its sports book, considering that it is probably the only casino in the U.S. with an indoor equestrian center and 1,200 stalls.

The South Point hosts more than 40 weeks of equestrian events a year, including the World Series of Team Roping, according to General Manager Ryan Growney. Those events bring tens of thousands of potential race bettors to the casino.

While many race bettors wage at the sports book and vice versa, there are enough differences to justify the separation. The race betting crowd is older, and their area is quieter.

It is also brighter. More light is needed for the pension-age bettors to read the race forms, as well as the wall boards covered with computer printouts that hang above the betting window.

Another key difference is the smaller amounts waged on racing. A $3,000 to $4,000 wager is large for horse racing, Jungers said. Sports bettors can easily drop tens of thousands on regular season sports games.

“He came home one night after a softball game and said, ‘We are moving to Vegas,’ and I said, ‘OK.’ When you are 22 years old, you are up for anything.”

While still a high school student, Jungers dreamed of becoming a certified public accountant and working in a corporate office.

She started attending college in Las Vegas and managed the books for a tire company, but she didn’t find that appealing.

The pay wasn’t great, either, she said, so she searched for a new line of work.

In the fall of 1981, she landed a job at Michael Gaughan’s Barbary Coast hand writing sports tickets with a pen. She didn’t know much about the industry.

“It was nerve-wracking,’’ she said with a laugh. “I had to quickly learn what all this betting stuff is and how to put it on paper.’’

She got a crash course from a friend, and it paid off.

“Michael (Gaughan) then decided to put me on full time, and it took off from there.’’

After four years at the Barbary, Jungers jumped to the Sands to be an assistant sports book manager. That was followed by 12½ years as a manager at Arizona Charlie’s and five years at the Gold Coast.

Then Gaughan tapped her to run the racing book at the South Point when it opened in 2005 under the name South Coast.

Jungers spends about half her time now in an office behind the betting window answering emails, preparing reports for supervisors and reading the latest horse racing industry news on sites such as Bloodhorse.com and Paulickreport.com.

The rest of the time, Jungers is out on the floor helping customers and colleagues. Local residents account for about 90 percent of the weekday customers. That falls to about 70 percent on the weekends, when visitors from Arizona and California pass through.

Jungers says she will occasionally bet on races, especially if it’s the Kentucky Derby or Breeders’ Cup. Though she doesn’t have a favorite horse, she does prefer trainers Bob Baffert and Todd Pletcher.

For the time being, she is focused on upgrading the book. The South Point’s outdated wall boards will be replaced with a dozen 80-inch TVs by summer, she said.

It comes on the heels of the South Point’s launch of its Nevada Race Book app in October.

Whether those changes will attract a larger crowd or more bets remains to be seen, but Jungers feels the race book has seen a bit more business since the economy emerged from the financial crisis.

“We roughed it for a few years, but it seems like things are picking up now as Las Vegas grows.’’