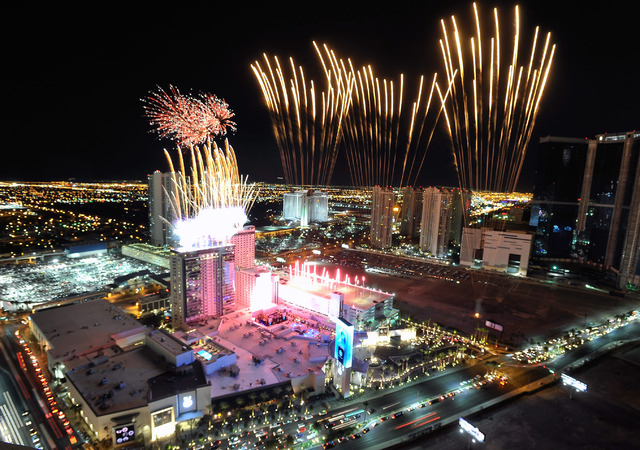 Fireworks explode over the SLS Las Vegas during their grand opening celebration on Saturday, Aug. 23, 2014. The 1,620-room Strip resort, a renovation of the aging Sahara, that closed in 2011 opened to the public after midnight. (David Becker/Las Vegas Review-Journal) 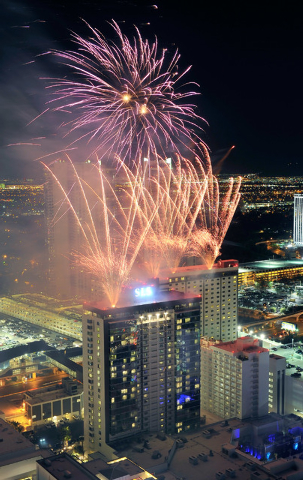 Fireworks explode over the SLS Las Vegas during their grand opening celebration on Saturday, Aug. 23, 2014. The 1,620-room Strip resort, a renovation of the aging Sahara that closed in 2011, opened to the public after midnight. (David Becker/Las Vegas Review-Journal) 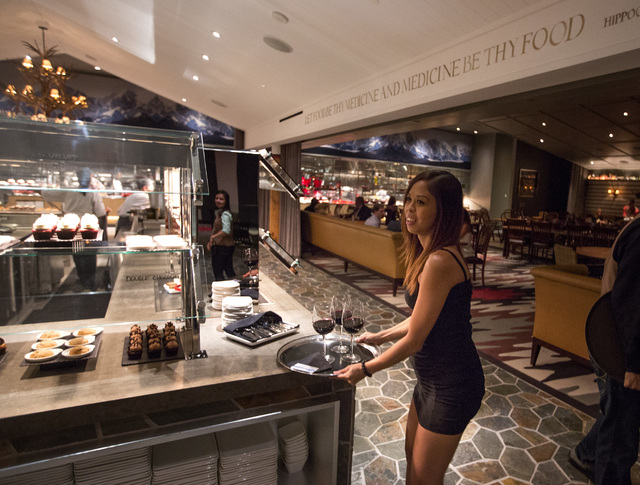 Jackie Lopez serves cocktails at The SLS Buffett during private opening night party inside SLS Las Vegas on Friday Aug. 22, 2014. Lopez, who used to work at Sahara hotel/casino, will be working as a cashier in the buffet. The $415 million development is on the site of former Sahara. (Jeff Scheid/Las Vegas Review-Journal) 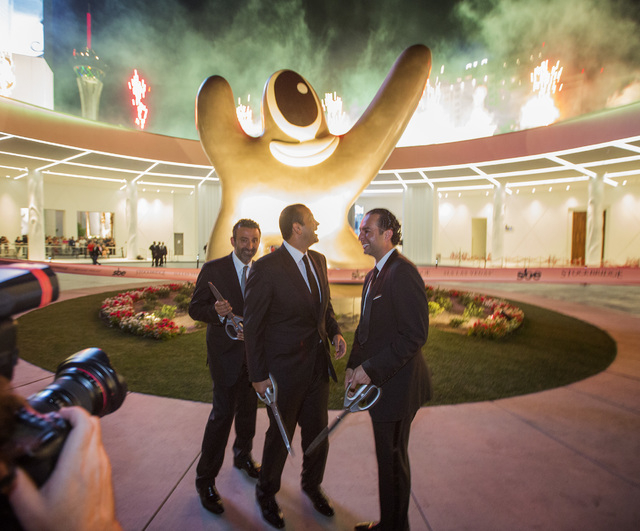 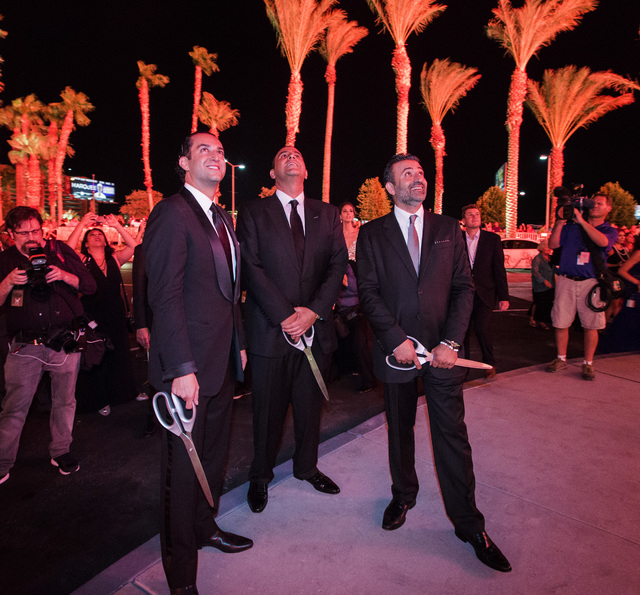 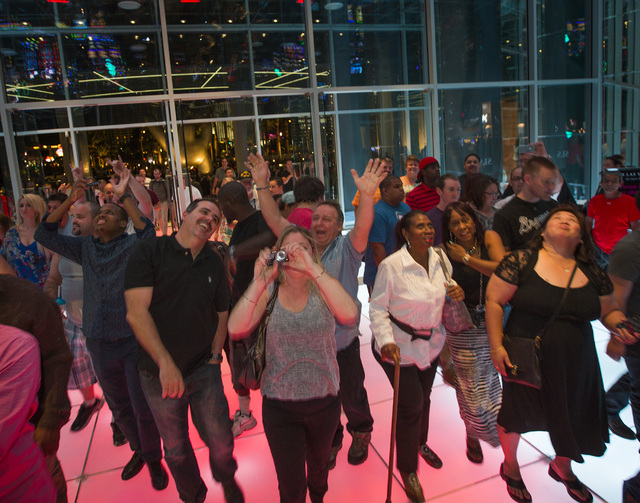 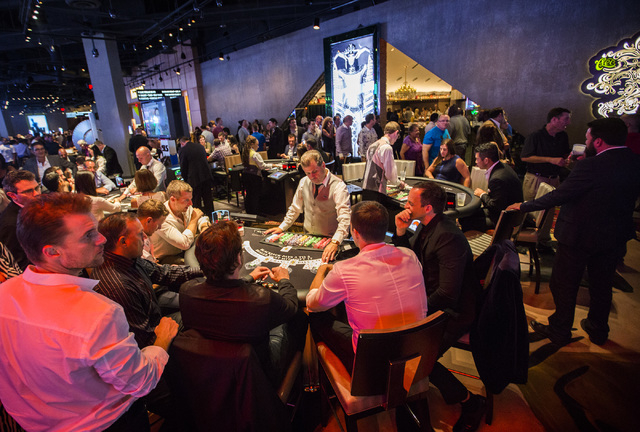 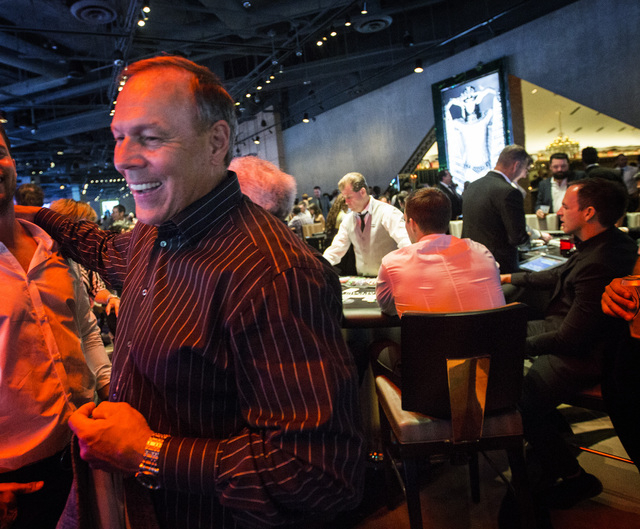 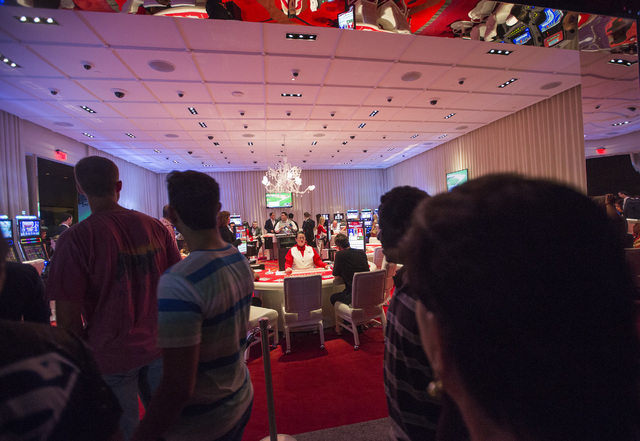 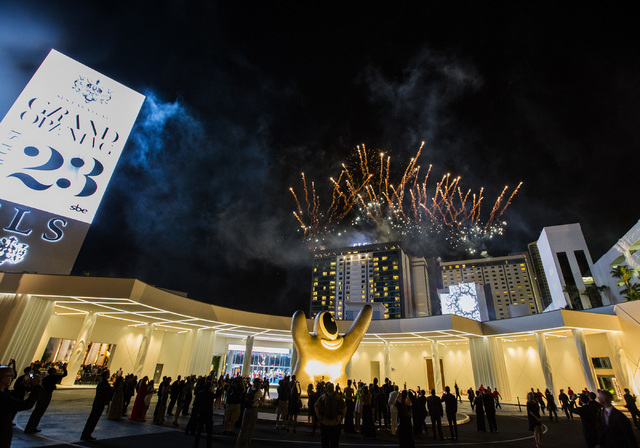 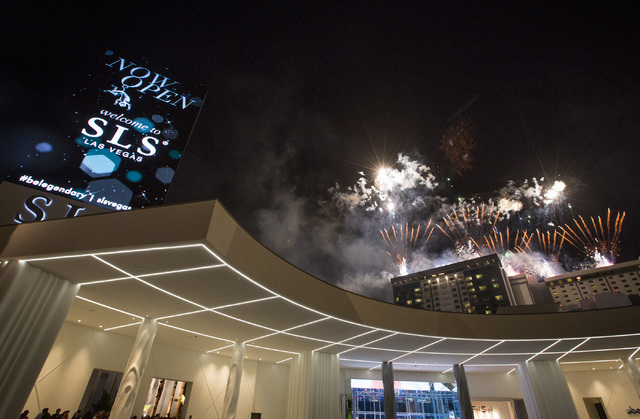 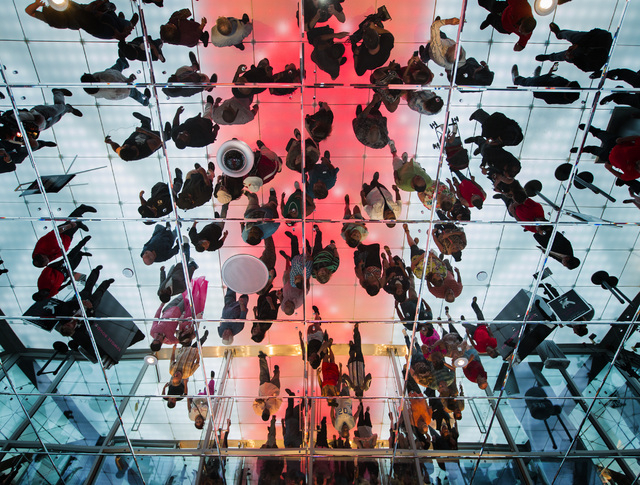 Reflection of people while they enter SLS Las Vegas on Saturday, Aug. 23, 2014. The $415 million development on the corner of Sahara Avenue and Las Vegas Boulevard opened at midnight.(Jeff Scheid/Las Vegas Review-Journal)

Less than 30 minutes after opening to the public, the SLS Las Vegas was packed.

Every table inside the Griddle Cafe was filled. There wasn’t an empty seat in the lobby’s Monkey Bar. A line snaked through the casino for customers waiting to sign up for “The Code,” the SLS Las Vegas’ player loyalty program. Slot machines and gaming table were busy.

Before the doors to the SLS opened just after midnight Friday, the Blanchards mixed with the last of the 3,600 guests who attended the resort’s lavish VIP celebration that began five hours earlier.

By the time other customers got through the entrances, the Blanchards had their Code player cards in hand. When the security tape came off the casino’s nearly 800 slot machines, they were ready to gamble.

The secret? The couple, who were staying at Paris Las Vegas, and six others shared a limousine ride to SLS from Wynn Las Vegas and cut through the masses.

“We had heard about the casino opening and everything that was going on all week,” Barb Blanchard said of the $415 million renovation of the former Sahara. “We couldn’t wait to get in.”

A line of potential SLS Las Vegas visitors wrapped around the building from the Strip, to east on Sahara Avenue, and north down Paradise Road.

“I’ve never seen anything like this,” said an SLS security officer stationed at the Paradise Road entrance.

The building was at capacity.

Excitement over the opening of the SLS Las Vegas, the Strip’s first new resort since the December 2010 unveiling of the Cosmopolitan of Las Vegas, was evident during the lavish VIP celebration. The event culminated with an elaborate fireworks display above the property shortly before midnight.

Dealers and other casino personnel stood at the ready behind their tables throughout the VIP event, where servers walked about the 56,000-square-foot casino carrying trays of drinks and food items from the SLS’s nine restaurants. All the SLS eateries were open during the party for guests to sample menu offerings.

“I think people will be surprised how nice it is in here,” said Neuman, who joined SLS from Caesars Palace. “I went to the SLS in South Beach (Miami) and that place was hopping. When I heard they were bringing SLS to Las Vegas, I knew I wanted to work here.”

Dealer Andy Richie, who spent more than seven years at the Fiesta Henderson, said he often visited the former Sahara’s casino. The new design, he said, was an improvement.

“It’s so different,” he said. “I remember the smokey poker room and that’s gone. I think the players are going to be excited.”

Joe Terzi of San Diego was a happy customer, even though he lost several hands of blackjack at a $25 minimum table soon after the wrap came off the game.

Terzi, who is president of the San Diego Convention and Visitors Bureau, was invited to the VIP party by his son, who works for SBE Entertainment, the Los Angeles-based nightlife, restaurant and hospitality operator that owns the SLS Las Vegas in partnership with Stockbridge Real Estate, a San Francisco-based private equity firm.

‘HAPPY TO BE BACK’

On the SLS’s second floor, employees of the resort’s buffet invited guests into the space to indulge.

She will work as a cashier in the buffet. But she previously spent six years working in the Sahara’s 24-hour coffee shop, rising to supervisor by the time the Sahara closed in May 2011.

Lopez is one of the nearly 100 former Sahara workers who are part of the 3,400 SLS Las Vegas employees.

She couldn’t wait to return to the Strip resort.

“It’s amazing to see the changes they did in here,” said Lopez, who worked in restaurants operated in Boyd Gaming Corp. and at a restaurant in Summerlin during the 39 months since the Sahara closed.

“I really love the company,” Lopez said. “There is no other place where you see the owner walking through the property every day. Once I knew they were hiring, I applied right away. I’m really happy to be back.”

High winds delayed the fireworks show for a few minutes.

Meanwhile, celebrities from the world of entertainment and sports joined the guests of SBE, Stockbridge, along with members of the gaming industry and Las Vegas business community, in celebrating the SLS opening.

Kravitz, who designed four suites for the 1,620-room hotel, planned to perform with his band at a super-secret concert inside The Sayers Club during the VIP party. But the fire marshal kept the number of guests inside the lounge at a minimum, leaving some invited guests wearing coveted black wristbands that a signaled a ticket to get in on the outside.

Bob Corbin of Henderson watched the red carpet action from a roped-off area near the SLS Las Vegas Strip’s entrance.

He thought the casino was opening five hours earlier and was disappointed he was off. He planned to come back at midnight.

“I really wanted to see what they did inside,” Corbin said. “It looks fun.”