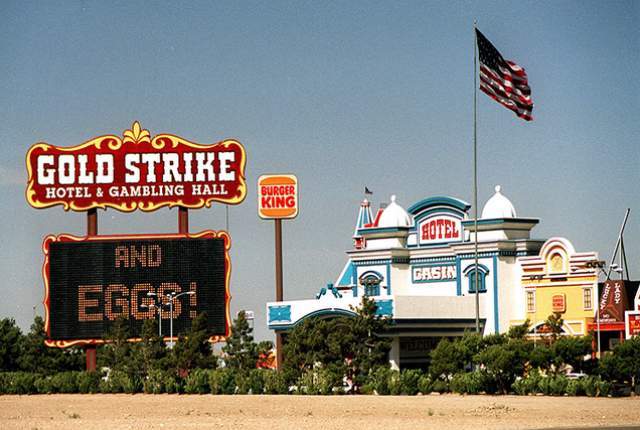 The Nevada Gaming Commission has approved the sale of the 300-room Gold Strike in Jean to the Herbst family. (Las Vegas Review-Journal file photo.)

The Nevada Gaming Commission has approved the sale of the 300-room Gold Strike in Jean to the Herbst family in a deal the new owners are calling more of a real-estate play than a gaming opportunity.

The board on Thursday approved the transfer of a gaming license from MGM Resorts International to JETT Gaming, a slot machine route created in 2009 and owned by Terrible Herbst CEO Jerry Herbst and his son, Tim Herbst.

Tim Herbst, who also manages Jean Ventures, a property development company, told commissioners the company is looking to develop a portion of the 167 acres the company owns on both sides of Interstate 15 into one of the largest truck stop operations in the Western United States.

The family wants to maintain the gaming license, but Herbst told the board the company intends to reduce the number of slot machines on the property from 450 to 200 while upgrading the technology with ticket in-ticket out machines.

As part of Thursday’s action, the commission also approved two restricted licenses at convenience stores on the site 11 miles north of the California border. The licenses will allow seven slot machines at the Gold Strike Auto and Truck Plaza and seven at the Nevada Landing Shell station.

Herbst and his brothers operated Herbst Gaming until the company filed for Chapter 11 bankruptcy protection and reorganized in 2010.

The company is now known as Affinity Gaming.

Jossel told the state Gaming Control Board earlier this month that the Plaza just completed its best first quarter in the eight years he has been involved with the property and that it outperformed downtown rivals in January and February.

He said the company is on track after battling through a series of road construction closures and traffic diversions on Main Street in front of the property.