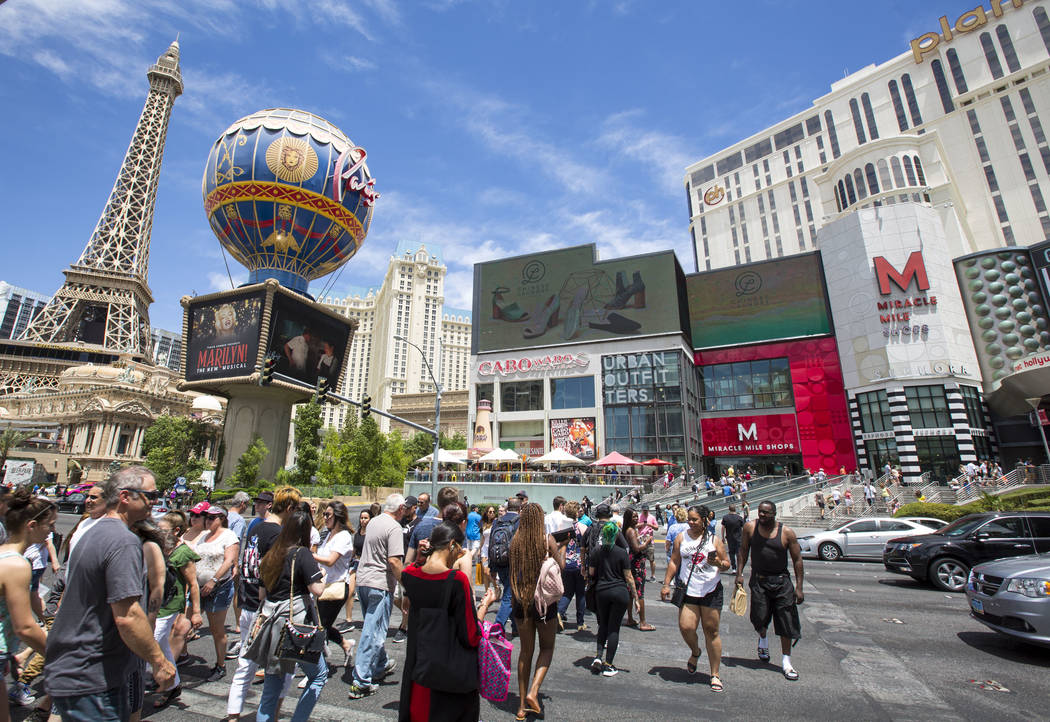 Clark County was responsible for 86.6 percent of the Nevada’s win total in May with $904.6 million, and $581.5 million of the county total came from the Las Vegas Strip. (Richard Brian/Las Vegas Review-Journal) @vegasphotograph

State gaming win returned to its billion-dollar ways in May, posting a monthly total of $1.04 billion, a 5.3 percent increase over last year, state officials reported Friday.

It was the fourth time in five months that winnings at the state’s 434 licensed locations topped the billion-dollar mark.

It also marked the best performance for the beginning of a calendar year since 2008. Win fell below $1 billion in April.

“The driver for this month was strong Strip baccarat win, which was up $21.4 million due to improved hold,” Lawton said. “Statewide slot win was up a solid 3.6 percent or $23 million due to continued increases in volume, up 2.5 percent. In fact, the state has recorded 15 consecutive months of increases to slot volume.”

Casino sports betting win also was up significantly, by $17.5 million or 590.5 percent. That was a result of the state’s sports books recording their largest loss in state history for basketball, $4.4 million, in May 2017.

Joseph Greff, a gaming industry analyst for New York-based J.P. Morgan, also noted that the growth was impressive because the May calendars of 2017 and 2018 were similar with eight weekend days. He expects numbers to be elevated in June with 10 weekend days in June compared with nine in June 2017.

County win was up substantially thanks to the $581.5 million total from the Strip, up 6.3 percent from last year, more than offsetting a 3.5 percent decline to $53.3 million for downtown Las Vegas.

Of the 20 markets monitored by the Control Board, only two — downtown Las Vegas and the Boulder Strip — had year-over-year revenue declines in May.

The three-month gaming revenue trend for Clark County, generally a more accurate gauge of win activity because it eliminates volatile swings resulting from calendar comparisons, shows the county’s 212 licensees’ win up 5.5 percent for March, April and May compared with those months in 2017.

The Las Vegas Convention and Visitors Authority also reported Friday that visitor volume was flat compared to a year ago, up 0.8 percent to 3.6 million.

The date shift of the Electric Daisy Carnival, from June in 2017 to May in 2018, may have prevented a visitation decline for the month.

Citywide occupancy was up 0.3 percentage points to 89.4 percent for May. The average daily room rate also was up 7.4 percent to $133.75. The LVCVA’s calculations don’t include resort fees.

For the first five months of 2018, visitation is off slightly, down 0.8 percent to 17.5 million people. Convention attendance is down 4 percent to 3 million.