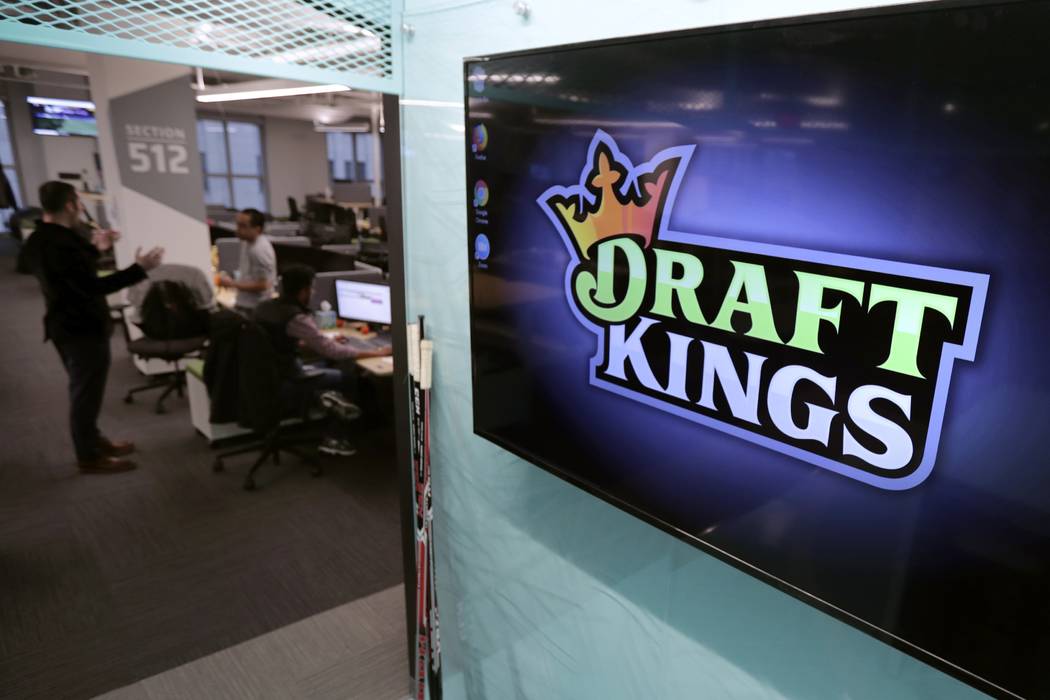 FILE - In this May 2, 2019, file photo, the DraftKings logo is displayed at the sports betting company headquarters in Boston. DraftKings announced Monday, Dec. 23 it is merging with two companies and taking its stock public. It will retain the DraftKings moniker and complete its merger with gambling tech firm SBTech sometime in the first half of 2020. (AP Photo/Charles Krupa, File)

DraftKings said it will complete its merger with gambling tech firm SBTech and special purpose acquisition company Diamond Eagle Acquisition sometime in the first half of 2020.

DraftKings said the combined company will be valued at $3.3 billion, and it will have $500 million on hand once the deal is complete. It did not give details about its planned initial public offering.

The new company will retain the DraftKings moniker and company co-founder and CEO Jason Robins will continue to lead it, along with a management team that includes co-founders Paul Liberman and Matt Kalish.

DraftKings said it will reincorporate in Nevada but remain headquartered in Boston, where it’s one of the city’s largest tech companies, with roughly 600 workers in its recently opened headquarters in the Back Bay neighborhood.

DraftKings was founded in Boston in 2012 as a purveyor of daily fantasy sports contests, which are are online games that challenge players to build rosters of actual athletes in order to vie for cash and other prizes based on how those athletes do in games.

While DraftKings plans to reincorporate in Nevada, it doesn’t operate in the state after former Attorney General Adam Laxalt issued an opinion in 2015 that daily fantasy sports is a form of gambling and that game operators are required to be licensed.

After the opinion was issued, DraftKings and its largest rival, FanDuel, who say daily fantasy sports are games of skill and not chance and thus not gambling, voluntarily agreed not to allow Nevada players to participate in their games.

Regulators said daily fantasy sports operators are welcome to seek licenses under existing sports book or sports pool regulations, but the companies have opted not to apply.

DraftKings has since expanded into online and retail sports books operations in the handful of states that have legalized sports betting, including Indiana, New Jersey, Pennsylvania, West Virginia, Iowa, Mississippi, New Jersey and New York.

Robins said the planned merger blends DraftKings’ established brand in the emerging U.S. sports gambling market with the “proven technology platform” developed by SBTech, a company founded in 2007 that has offices on the Isle of Man, in London and elsewhere in Europe.

Diamond Eagle Acquisition is a publicly-traded, Los Angeles company that invests in media and digital entertainment ventures. It was founded earlier this year by Jeff Sagansky, a former president of CBS Entertainment, and Harry Sloan, a former chairman and CEO of MGM.

DraftKings had previously attempted to merge with FanDuel, but the plan was scrapped in 2017 after the Federal Trade Commission and the attorneys general of California and the District of Columbia sued to block it over antitrust concerns.

The Review-Journal’s Richard N. Velotta contributed to this story.