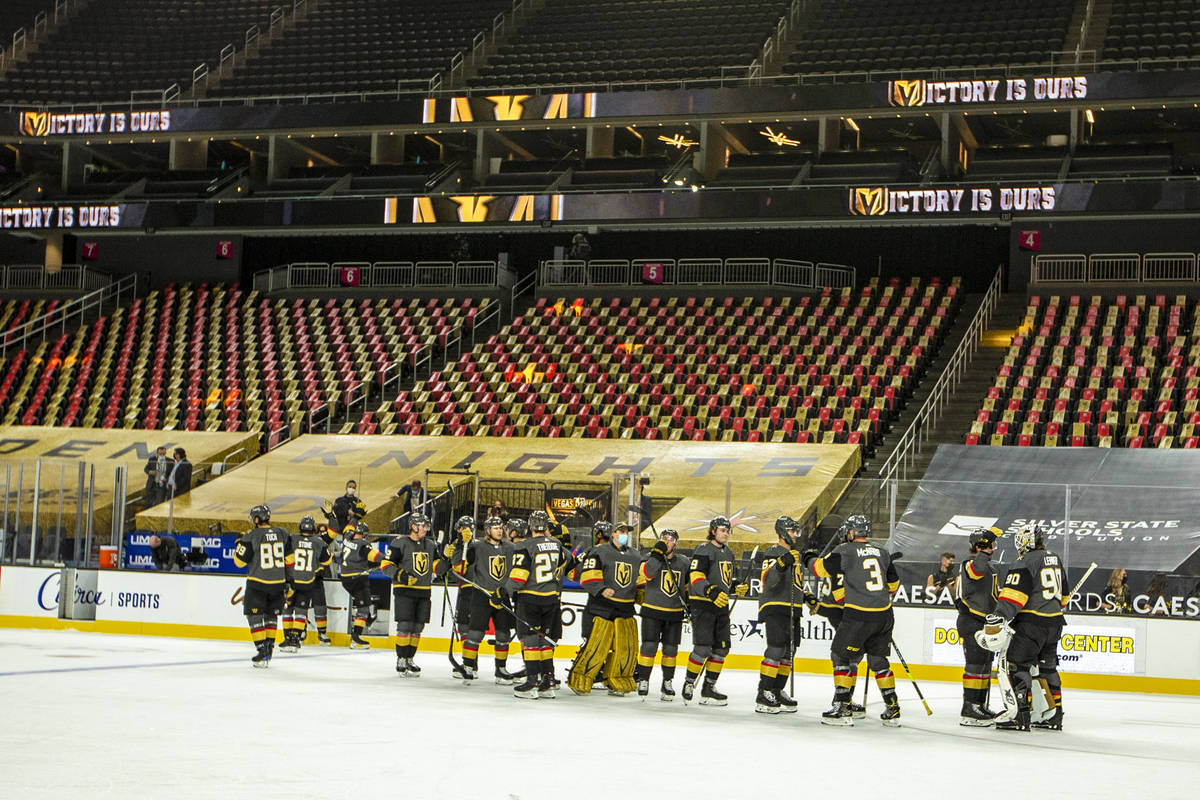 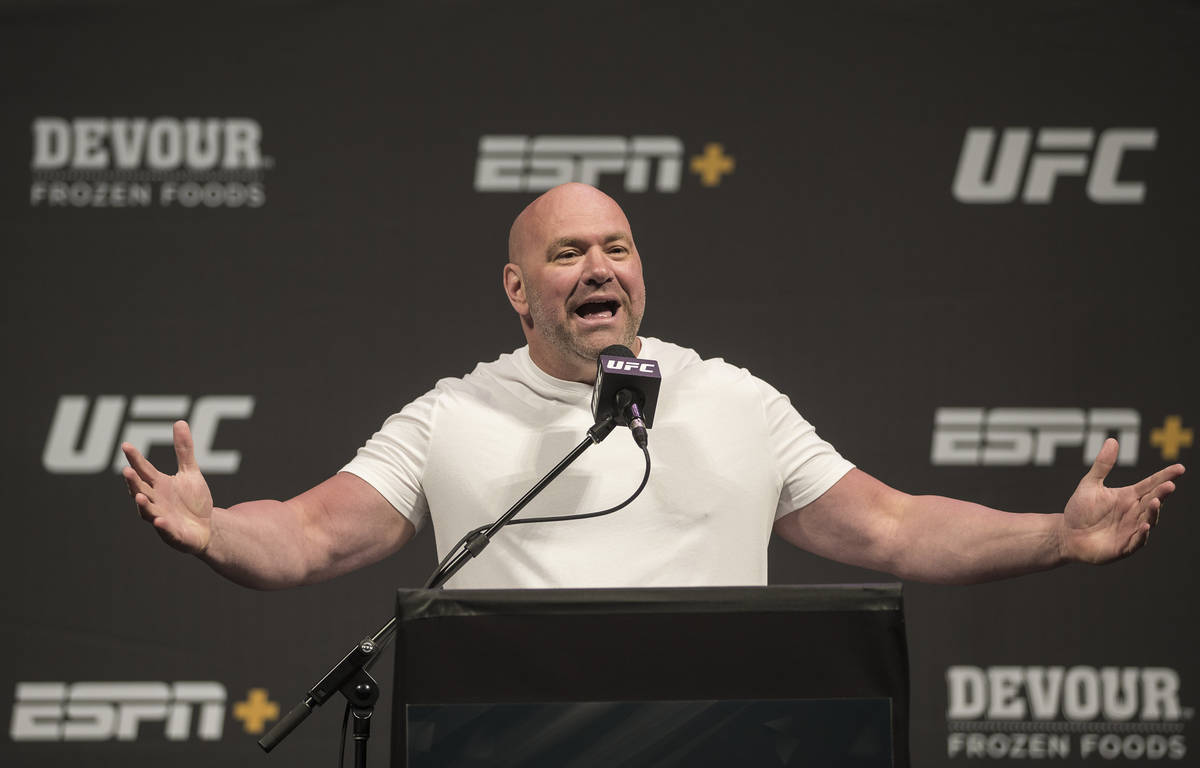 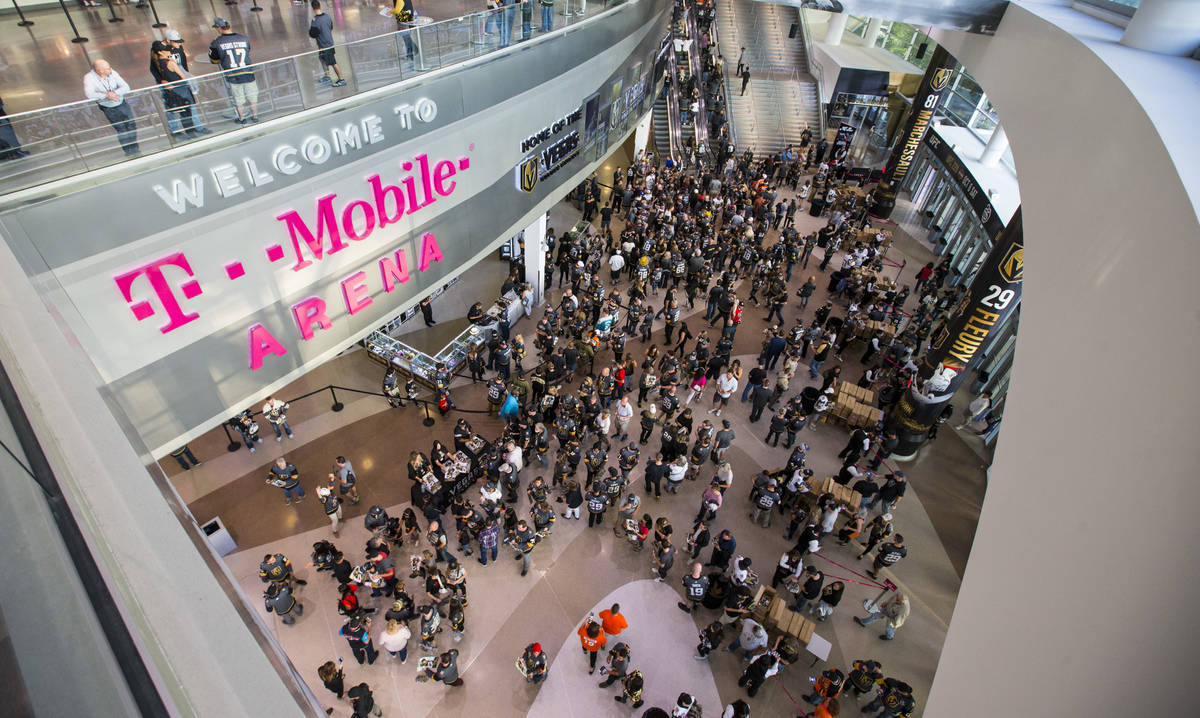 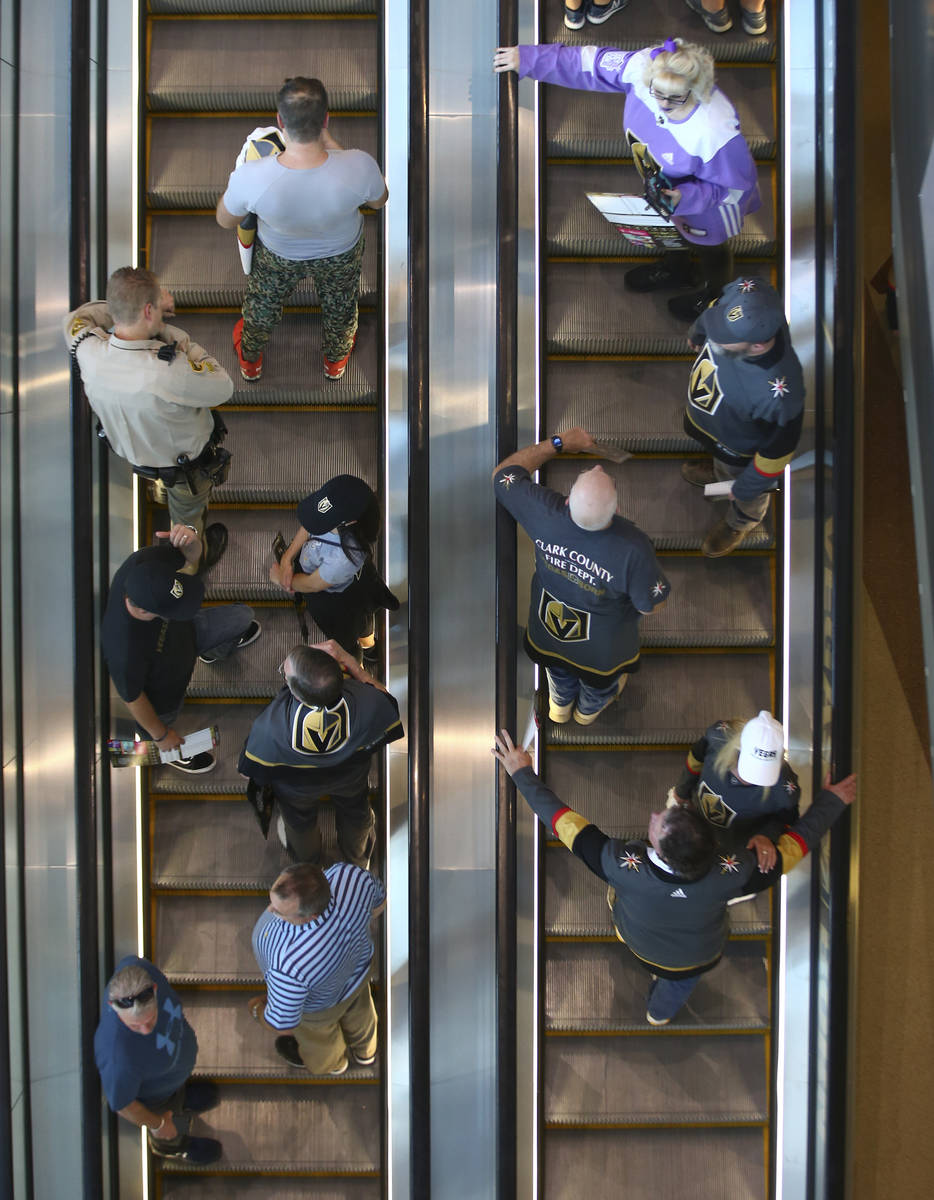 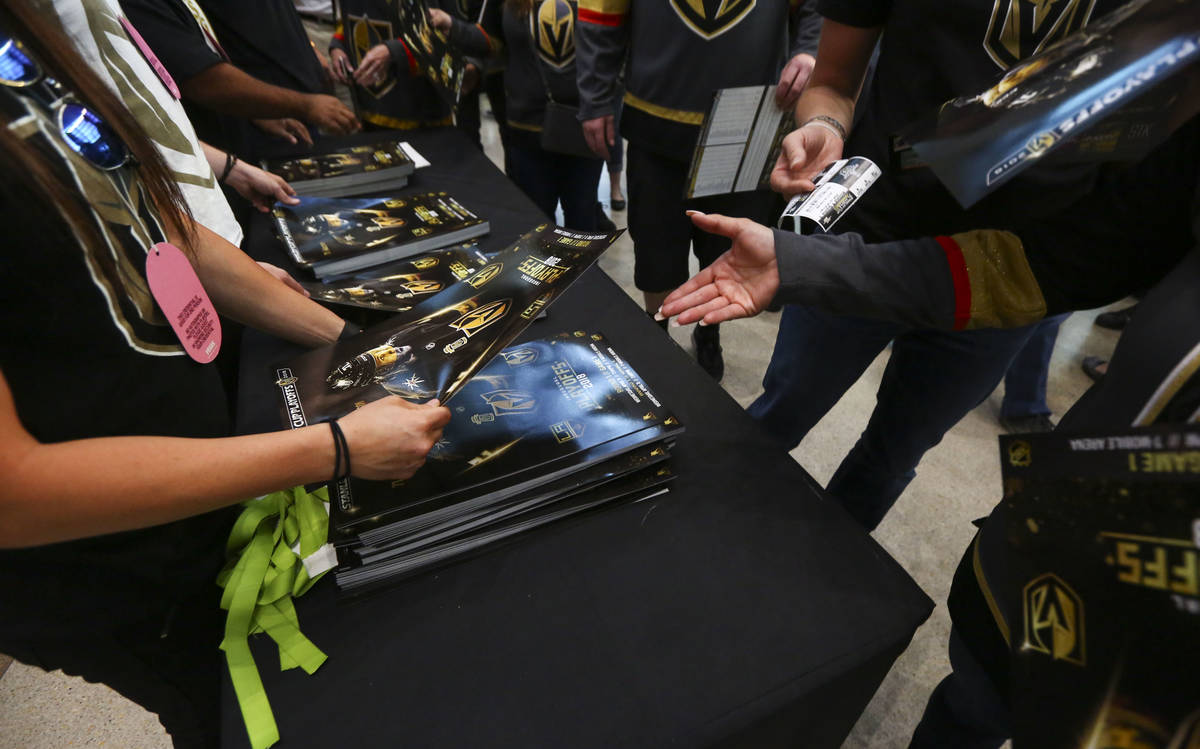 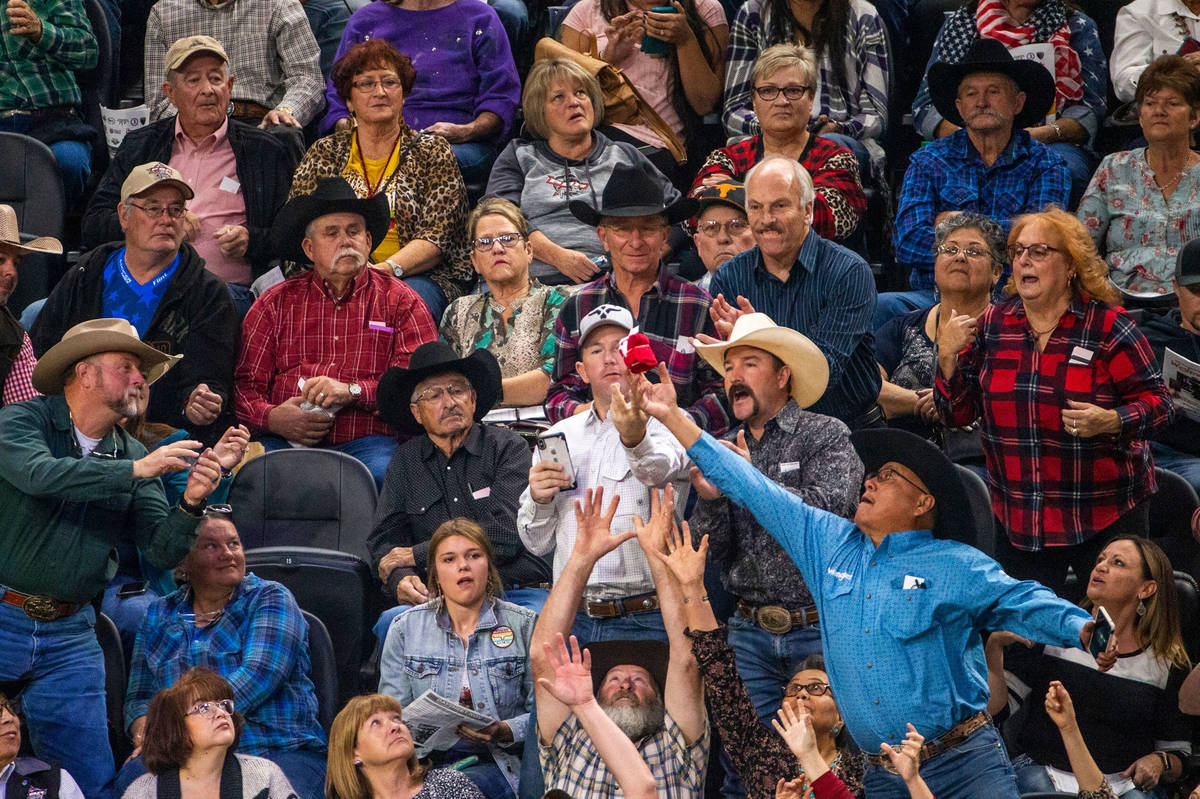 Fans reach for a free t-shirt tossed in to the crowd during the last day of the PBR World Finals at T-Mobile Arena on Sunday, Nov. 10, 2019, in Las Vegas. (L.E. Baskow/Las Vegas Review-Journal) @Left_Eye_Images 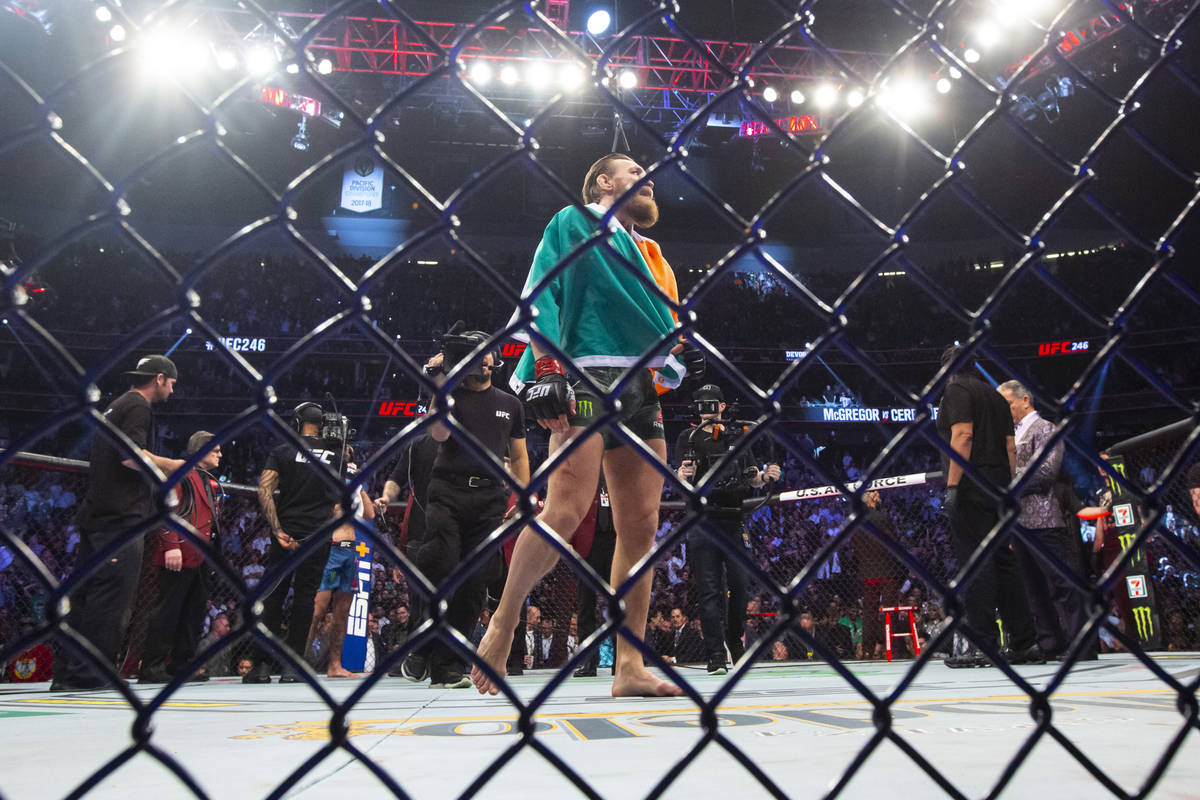 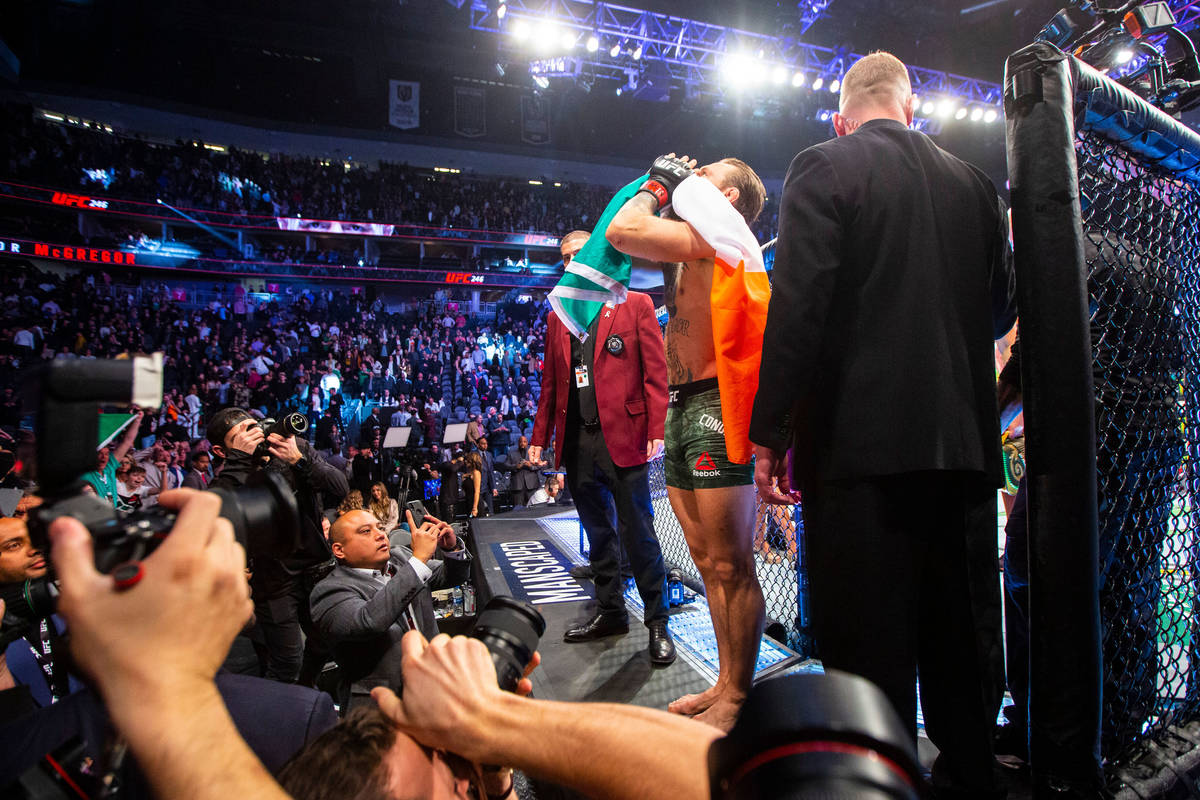 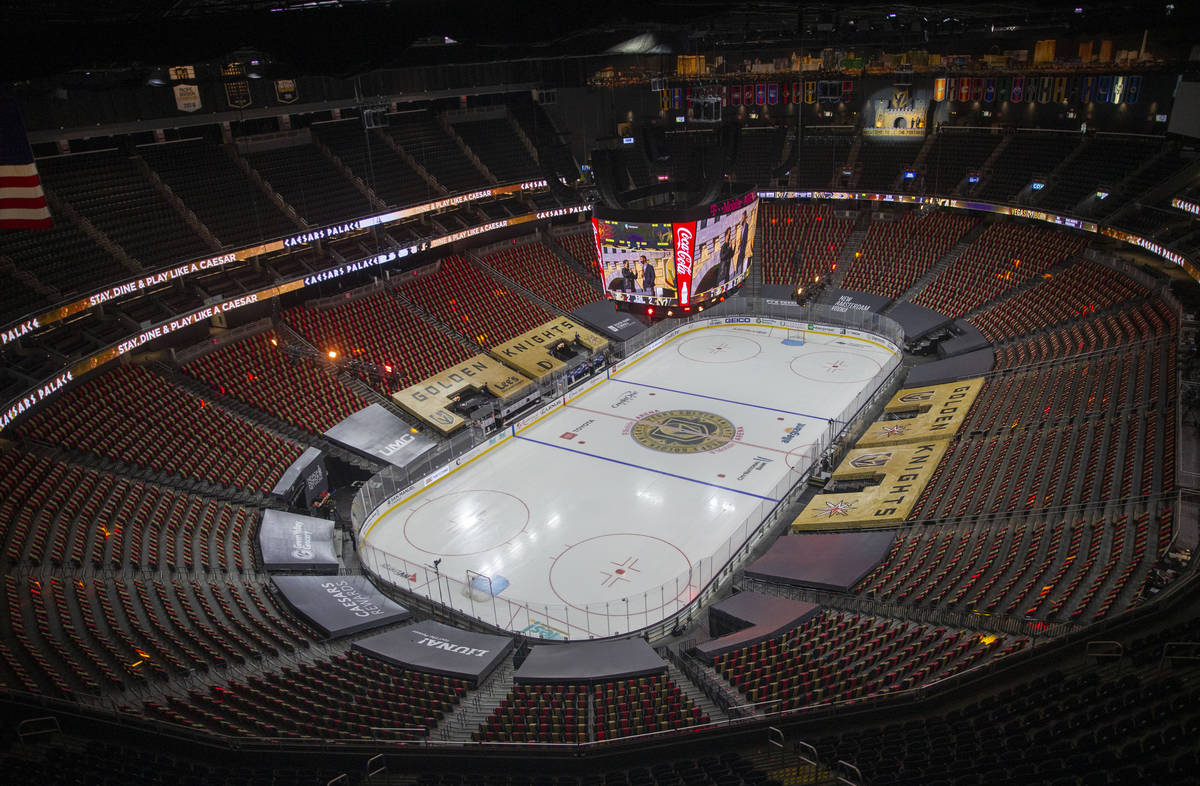 A look at T-Mobile Arena during an intermission of an NHL season-opening game between the Vegas Golden Knights and the Anaheim Ducks on Thursday, Jan. 14, 2021, in Las Vegas. (Heidi Fang/Las Vegas Review-Journal) @HeidiFang 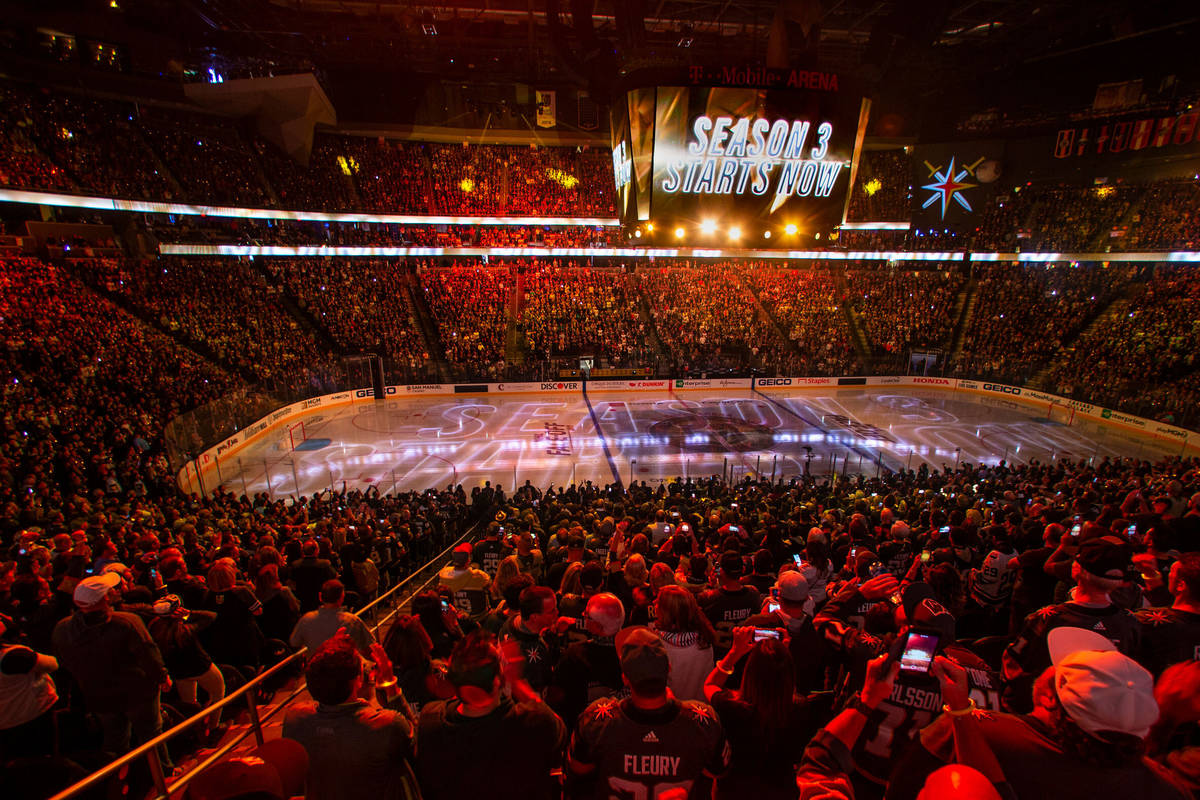 Season 3 starts sign above the crowd and on the ice before the start of the first period of the Vegas Golden Knights NHL season-opening hockey game versus the San Jose Sharks at the T-Mobile Arena on Wednesday, Oct. 2, 2019 in Las Vegas. (L.E. Baskow/Las Vegas Review-Journal) @Left_Eye_Images

On Saturday afternoon, the UFC hosted a live event in Abu Dhabi with — for the first time in 10 months — fans.

But UFC president Dana White, who was one of the first to bring back any kind of organized sport without a live audience during the COVID-19 pandemic, doesn’t expect to be producing fight cards in full arenas any time soon.

“I’ve been talking to people who are in the middle of this thing and they’re telling me that we aren’t going to have a normal life again until like 2023,” he said. “I hope that’s not true, but that’s what I’m hearing from people I respect. That’s the mode I’m in.

“It is all about who can weather the storm and keep their business alive. I don’t even know how it’s possible, but it’s what you have to do. You have to start figuring out how to adapt.”

That was a focus of several panel discussions at the recently concluded virtual CES. Normally held in Las Vegas, this year’s in-person CES was canceled because of COVID-19.

Just as the pandemic has shut down the conference industry, it has halted or greatly limited in-person attendance at sporting events, too. The consensus at CES panels: No matter when stadiums and arenas are able to bring back massive crowds, those venues are going to be different.

And not necessarily in a bad way.

Health and safety will be at the forefront, though advancements will extend beyond that.

“I’m actually pretty jazzed about the disruption aspect of this because there’s never been a disruption that we didn’t derive benefit from,” Russ Simons, Chief Listening Officer for Venue Solutions Group said. “I think it’s a fantastic opportunity for us to learn from the challenges we faced this year.

“I’m absolutely certain there will be tangible long-term benefits from our experience.”

Simons said during the annual conference for technology and innovation that some of the old ways of doing business at sports and entertainment venues were lacking in state-of-the-art sanitation standards even before COVID-19.

“In my conversations in counseling the people we do business with, we talk about whether we were doing everything we could have and should have done in the areas of hygiene and sanitation, COVID-19 notwithstanding,” Simons said. “The honest answer is no. Nobody is going to be disappointed in the fact we are cleaner, safer and more sanitary going forward. As an industry, we’re going to be better for it.”

Some of the innovations implemented in stadiums and arenas will simply be technologies developed in other fields that will now be diverted to a new purpose. That will include things like UVC lighting, which has been utilized in hospital settings for years and will now be incorporated into escalator handrails and HVAC systems in ceilings and locker rooms.

Simons expects those to be just the tip of the iceberg as there has never been a time when more companies were devoting this many resources to a single issue.

Some of those innovations will also be pivotal in helping solve issues stadiums, arenas and sports teams and leagues have been trying to address for years.

I’ve been talking to people who are in the middle of this thing and they’re telling me that we aren’t going to have a normal life again until like 2023.

The pandemic has forced more people to get comfortable with cashless and contactless transactions, which will almost certainly be implemented on a much wider scale than they were before the event world came to a screeching halt in March.

Fans were already expressing displeasure with waiting in lines at venues, so tweaks like mobile ordering and reducing the menus at concession stands to speed the process can be implemented with even less resistance when fans return.

Natara Holloway, the NFL’s Vice President of Business Operations and Strategy (Football Operations), said the league has long sought ways to cut down on overcrowding that occurs everywhere from the drive into the stadium to the entrances to the concession stands.

Developments in touchless transactions and strategies to cut down on points of congregation that have been contemplated to maintain social distancing can be further implemented to enhance the fan experience when full attendance does happen again.

“Part of the challenge of getting people to attend stadiums has been they don’t want to wait in lines or traffic, so being smarter about how people get in and out and how they navigate in the venue in a more spaced out way, whether it’s COVID or to just make the experience better, will stick around for years to come,” she said. “These are things we were working on long before COVID. It’s a challenge that needed to be addressed and now has to be addressed.”

The talk of having fans filling up stadiums and arenas around the world again sounded promising, though the stark reality was evident from the fact it was being discussed on a videoconference instead of live at the annual technology convention, which usually brings nearly 200,000 people together in Las Vegas.

Mass vaccination is the obvious first step, but confidence in all of the technologies and the safety of congregating is going to take time to rebuild, according to Jim Digby, president and co-founder of the Event Safety Alliance, a nonprofit trade association of live event industry professionals.

“I think it’s going to be some time before we’re anywhere close to the kind of numbers and capacities we saw pre-COVID,” he said. “It’s going to require all the competent tools that we can muster applied against good policy, good practices and a compliant audience, as well, which is something hard for us to control. People’s risk thresholds are different and each of us is made differently. We’ve got some challenges ahead, for sure.”

That’s a reality that was recognized early on in the pandemic by White and the UFC, who restarted operations in May, just two months after the sports world shut down, then staged an event nearly every Saturday the rest of the year.

White said the UFC spent $17 million on testing to continue to run events last year. That was just for a half a year and with only essential staff in the building. Expanding testing to fans, even with supplies becoming more available and less expensive, would be a massive and cost-prohibitive undertaking.

So in addition to vaccination programs expanding to the point the general public reaches some level of herd immunity, the public will have to be trusting of the safety measures in place and likely become more accepting of sharing health information.

Part of that could include submitting to a vaccination passport in some form or another. Several companies have been developing health monitoring technologies that could aid in a more expedited return to live events.

BioButton, a wearable technology that was originally developed to monitor vital signs on patients leaving hospitals and returning home, is now being used to help track potential symptoms. The BioIntelliSense product was honored as a CES 2021 Best of Innovation Awards honoree.

CLEAR, known in the airport security space, developed an app to track symptoms and exposure that is being utilized by the Orlando Magic this season as the team welcomes 4,000 fans per home game.

Caryn Seidman-Becker, the company’s CEO, said people may have to live with some level of acceptance about a sharing of personal information, though it can be mitigated. For instance, the technology in use in Orlando simply shares a green light for fans who are cleared to enter. No details are revealed about those who aren’t cleared.

“I think while COVID isn’t a long-term issue, health and wellness are,” she said. “We’re going to live in a hybrid world for a long time. Some people will be vaccinated, some will not.”

As a result, Seidman-Becker said, sharing health information to gain access to public events will become more the norm, “just like when you go to Kenya and have to show a yellow card for being vaccinated for yellow fever or like when you have to fill out forms every year for school about your kids’ vaccination statuses.”

That sort of intrusiveness is sure to turn some people off, but it could be a necessary evil for some time.

“There’s a lot more to be gained from the technological advent in our lives than there is to be lost,” Digby said.

The industry experts expect the innovations to continue.

As Seidman-Becker put it, there will be a great deal of competition among event producers to make the live experience even better now that consumers have grown accustomed to watching from home.

“That goes for everything from sports to entertainment, events, office buildings, Broadway, restaurants, retail,” she said. “I think there’s a huge opportunity for people, if there is a sliver lining, to rethink that customer experience and make it better. I think that’s going to happen.”

She also pointed to the way things are distributed, citing the release of the Broadway show “Hamilton” on Disney-Plus. Traditional thinking may dictate a move like that means less consumers would be interested in attending the live version, but demand for a live ticket figures to be even higher with even more people having been exposed to the product who now want the live experience.

Basically, the playbook has been thrown out over the last 10 months.

“I’m optimistic in 2021 that the physical and digital experience will come more together and I think those experiences will be way better than they were before,” she said. “I also think distance makes the heart grow fonder. People coming together again will be more meaningful and be more deeply appreciated. I think it’s going to go like a coiled spring and the experiences will be better and safer.

“You have to come back better than you left.”