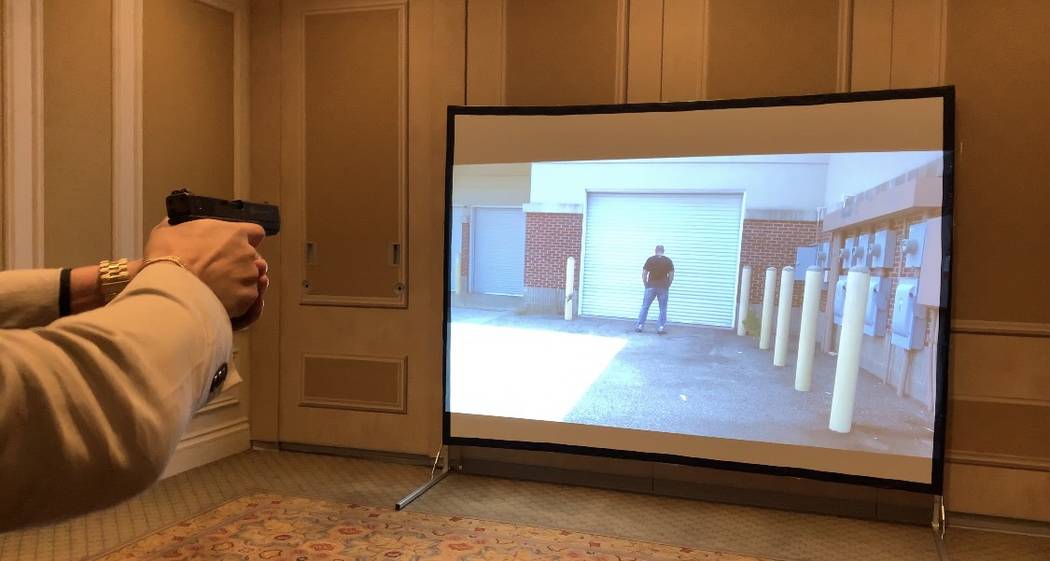 The virtual training program developed by MEGGITT Training Systems allows officers to train in more than 300 situations, with six-to-10 possible outcomes for each. The company showcased the program at the SHOT Show this week in Las Vegas.

Used in screens setups, the system is available in one-, three- and five-screen versions, allowing for a different level of line of sight in each.

The systems range between $15,000 and $100,000, according to Johnathan Ayala, salesman with MEGGITT. Police departments across the country use the system including departments in Miami, Florida, Atlanta, Georgia, and Santa Ana, California. The system comes with the desired number of screens, a computer with the program installed, a projector and speakers.

There are six categories of scenarios offered, with different scenarios in each category. The scenarios include home invasion, first responder, off duty, patrol encounters and use of force. The program also uses mock weapons, including pistols, rifles and taser guns, that all fire with compressed air, so officers can gain experience using a variety of weapons.

“The intros can be different, the outcomes could be different and it’s all instructor-driven,” Ayala said. “The instructor can escalate and de-escalate based on the student’s feedback — whether he’s using good or bad verbal communication.”

As the selected scenario is chosen, the selection of different outcomes is chosen, resulting in the training officer to learn how to try to talk through a peaceful solution with a suspect or, when necessary, to use nonlethal and deadly force.

Getting the muscle memory while carrying out different scenarios and outcomes translates to smarter decisions in the line of duty, Ayala said. The gun system uses lasers to shoot at the screen and also allows the guns to communicate wirelessly with the system. That allows officers’ techniques to be tracked and improved if any issues are seen with their shooting.

“It gives the officers virtual experience, so if they do make a mistake here using the wrong use of force they can see that,” he said. “They’ll be debriefed the next morning when they go on the streets. It’s better to practice that way than when they go on the field. If they make that same mistake on the field it can cost them their job, his life or somebody else’s life.”