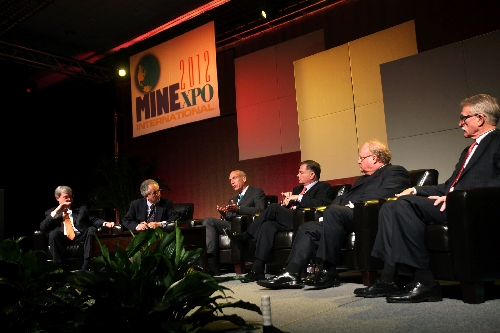 That shiny gold coin has a flipside.

Sure, prices and demand for gold and other mined materials are flying high, but it’s tougher to find productive ore veins. Permitting gets more complicated every day. Costs are rising. And a labor shortage is leaving the industry with fewer people to help with solutions.

In short, mining, which is Nevada’s No. 2 industry in gross revenue, has potential but also faces obstacles, according to panelists at Monday’s opening session of the trade show MINExpo International at the Las Vegas Convention Center.

"Despite all the uncertainties, it’s a very good bet that we are living in an era of enormous opportunities, and there are some unprecedented possibilities to expand and to profit," said session moderator Jeffrey Garten, Juan Tripp Professor of International Trade, Finance and Business at Yale University’s School of Management. "Over a long period of time, the rising tide is very likely to be true, but there are going to be a lot of surprises along the way. There will be a lot of walls put up, some of them suddenly, so it’s going to be a very bumpy ride."

Though "gold is really a great place to be," the industry has problems, O’Brien said. First, the time from discovery to production has jumped from an average of 10 years a decade ago to nearly 17 years today. Also, the industry is spending record money on exploration, but hasn’t had a big find in the past decade.

"It’s going to be more difficult to produce gold unless we have an innovative change," O’Brien said.

Other mined materials, such as coal and copper, have the same struggles. Coal demand will grow 65 percent through 2035 as the developing world uses more power, said Greg Boyce, chairman and CEO of St. Louis-based coal miner Peabody Energy. But the industry will grapple with public policies, access to coal resources and infrastructure costs along the way, Boyce said.

And thanks to challenges such as declining ore grades, "very complex" permitting and the availability of water and power for processing, the balance between copper supply and demand is razor-thin, said Red Conger, president of Phoenix-based Freeport-McMoRan Americas. The world has about a week of copper stores on hand, Conger said.

Worse still, the industry has fewer workers to wrestle with those challenges. The industry "missed a whole generation of people in the ’90s" who decided to go into technology and banking, O’Brien said. Newmont has 500 mining engineers worldwide who are eligible to retire in the next five years. The company could hire every college mining graduate in the United States, and it wouldn’t be able to replace those engineers, O’Brien said.

So companies are trying to sell people on the business. O’Brien pointed to a Sept. 18 Bloomberg article noting that 2012 graduates of the South Dakota School of Mines & Technology outearn recent Harvard grads, with a median salary of $56,700, compared to $54,100.

"A mining degree is worth its weight in gold," O’Brien said.

Aside from more workers, faster permitting would help, too, O’Brien said.