There’s nothing in Alorica’s contract with DETR that sets performance goals or holds the company accountable for its service levels.
Michelle Lau watches one of the court cases involved with the unemployment office being streamed at her home in Las Vegas, Thursday, July 30, 2020. Lau has yet to receive unemployment benefits and calls the unemployment office daily. (Rachel Aston/Las Vegas Review-Journal) @rookie__rae 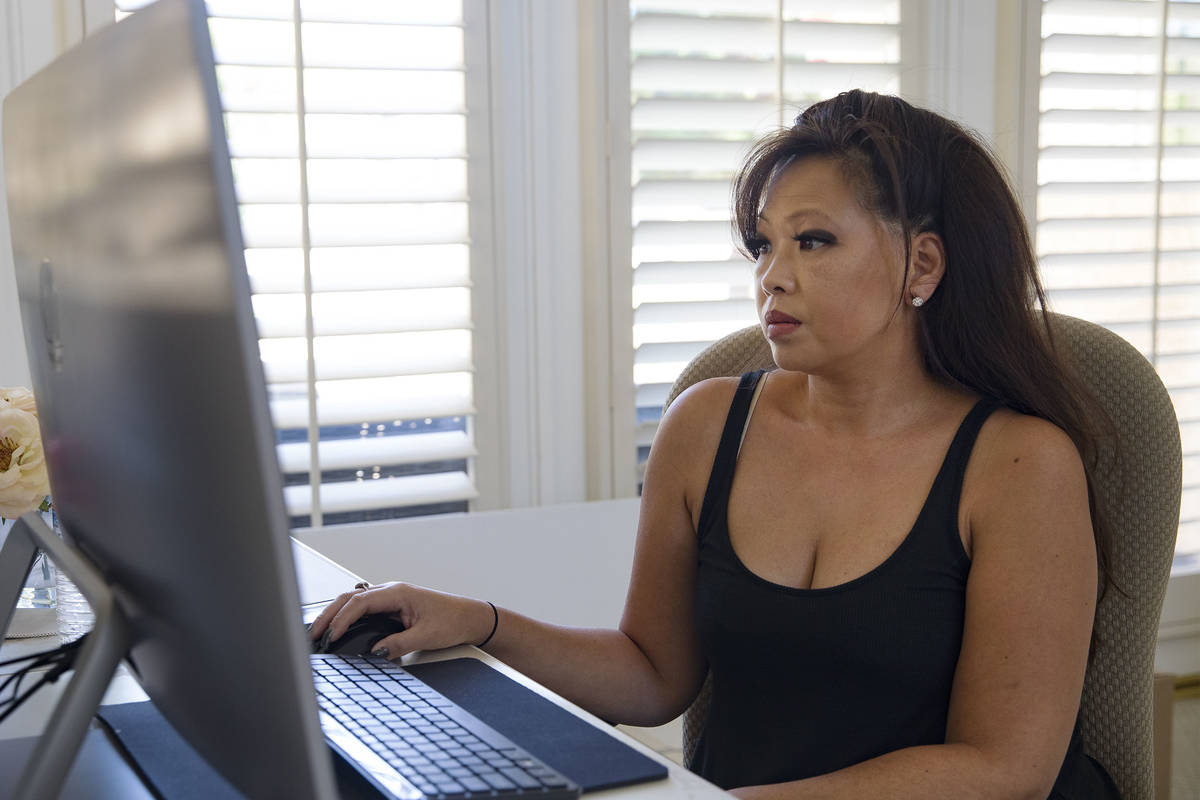 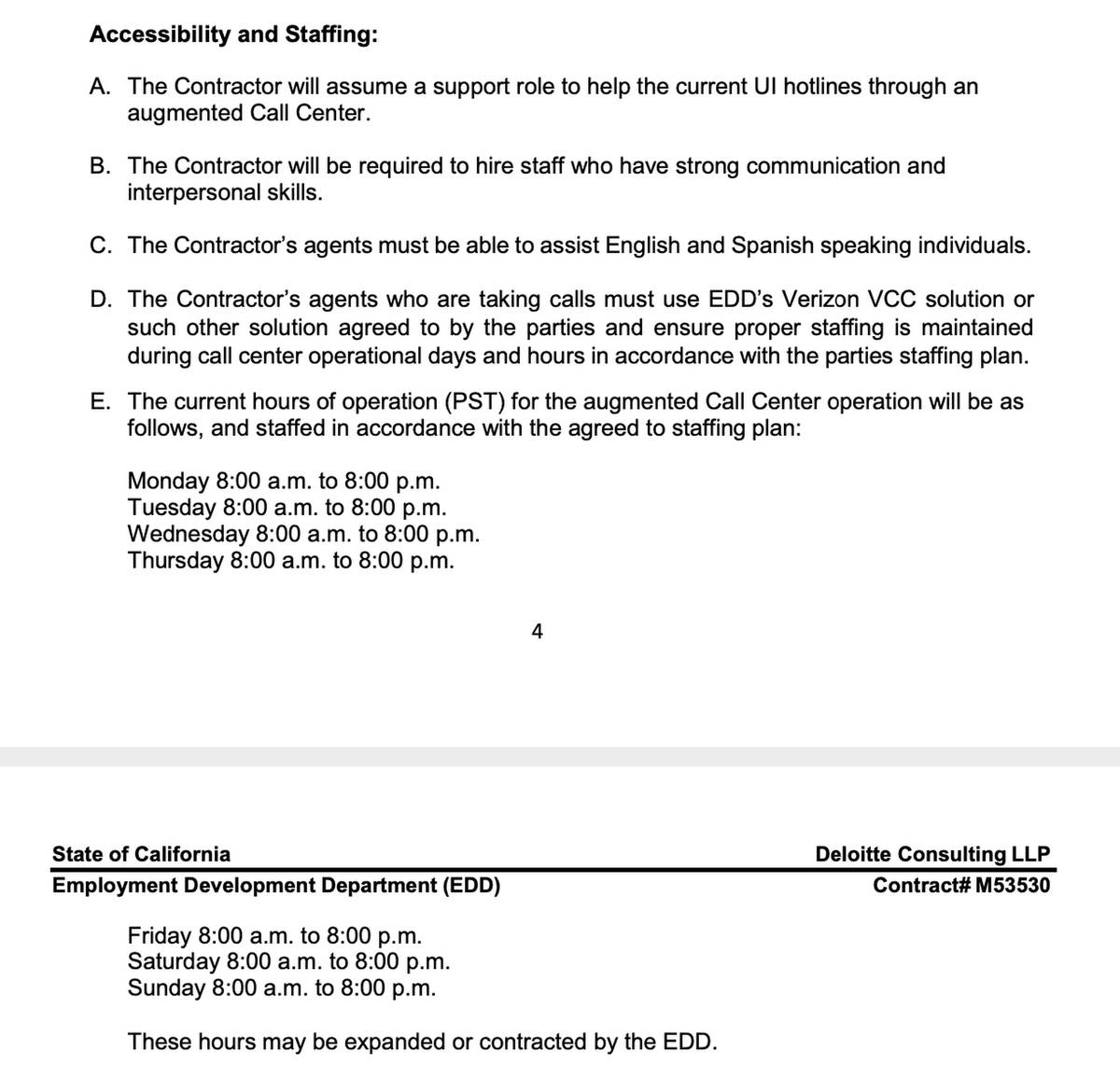 Excerpt from Alorica's "Source of Work" page within its contract with DETR. 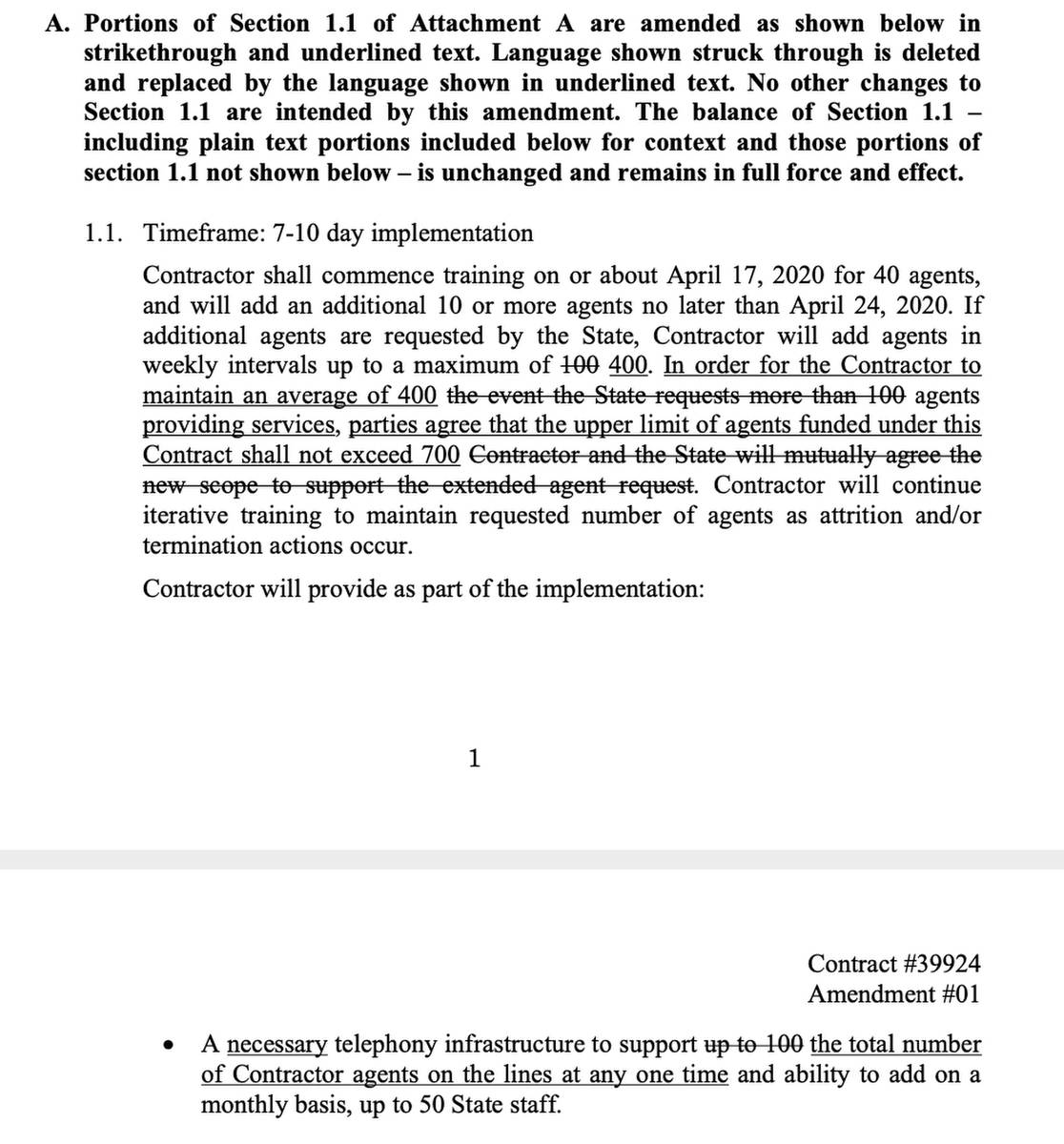 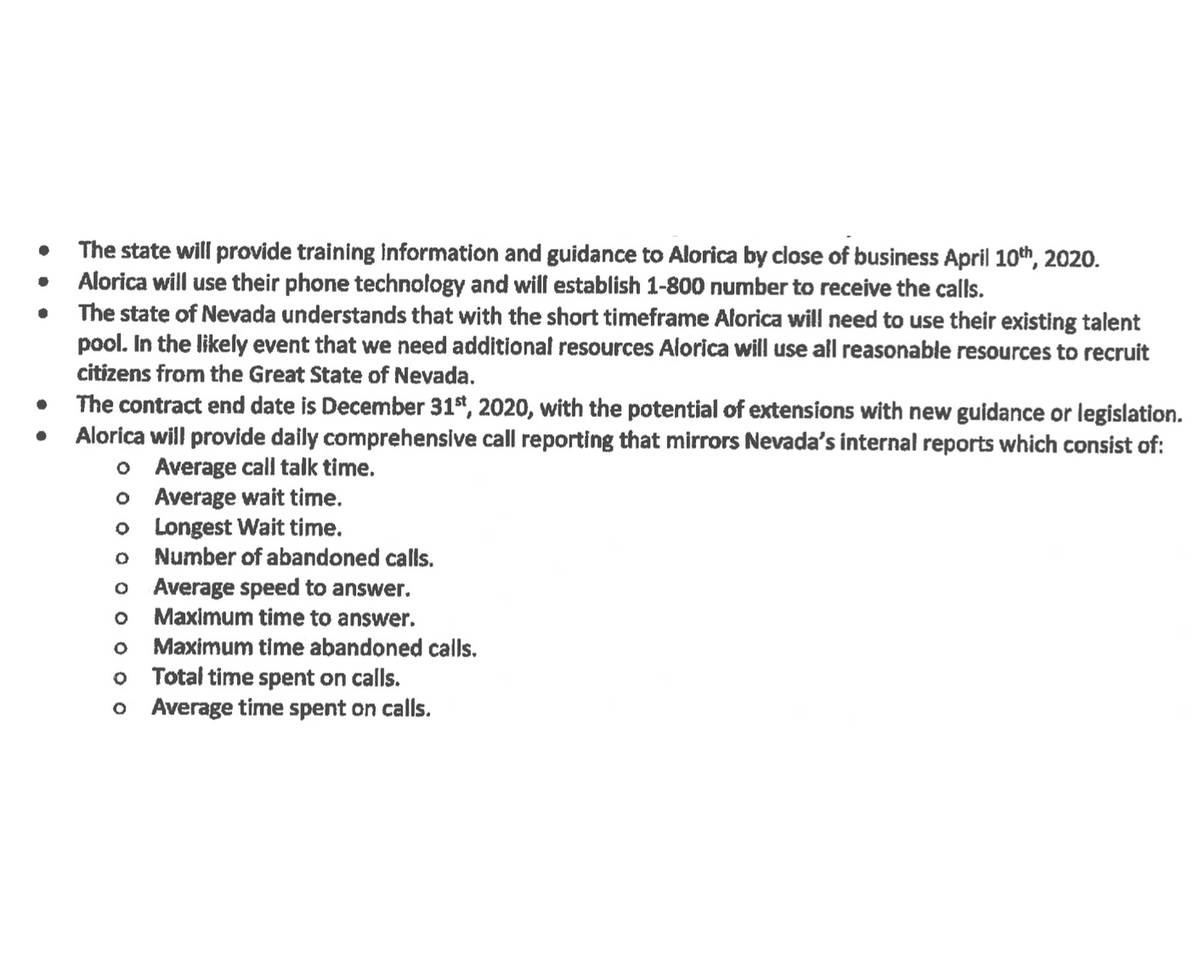 Michelle Lau has learned to expect the abrupt silence that comes, like clockwork, after seven minutes of waiting on hold.

Trying to get through to the Alorica call center for help with her unemployment insurance has been maddening.

Calling the hotline has become an act of futility for jobless Nevadans, and many don’t understand why it’s so difficult to reach a representative more than three months after Alorica was tapped by the Department of Employment, Training and Rehabilitation, or DETR, to answer questions and resolve claimant issues.

“The call center people are incompetent. They don’t have the tools or the resources or the access to effectively tell you what the problem is,” Lau said. “I don’t know if they (DETR) know what the call center is doing. They must.”

The contract between Alorica and DETR shows one possible reason why claimants are having trouble getting through to the call center: There’s nothing in the language that says “we’re going to do a good job,” said one expert who reviewed the contract for the Review-Journal.

DETR was overwhelmed with calls after the state-mandated closure of many businesses in mid-March sparked thousands of furloughs and layoffs across the Las Vegas Valley. There have been 624,817 new claims filed in 2020, 603,165 of which have been filed since the week ending March 14.

DETR announced April 15 that it was hiring Alorica to help meet demand and alleviate overwhelmed employees.

Contact center contracts typically include a list of goals — or metrics of success — to ensure customers are being helped and to keep the call center accountable. But this section, known as a service level agreement, is not in Alorica’s contract.

Spokeswomen for DETR and Alorica did not return requests for comment.

Robert Davis, founder and chief executive of contact center consulting firm Robert C. Davis and Associates, said it’s usually the responsibility of the client, in this case Nevada, to tell a service provider like Alorica what the measure of success should be.

“It looks to me like Nevada just threw 100 people at the problem for eight months and hoped for the best,” he said after reviewing Alorica’s contract with DETR.

The 17-page contract, obtained by the Review-Journal, shows the cost would not exceed $5 million and is effective from April 10 to Dec. 31.

The one-page “scope of work” section, outlining what is expected of Alorica, establishes the staffing level at 100 full-time employees with 15 percent able to assist Spanish speakers.

The section fails to include how many calls DETR expects Alorica to answer within a specified amount of time, a metric consultants said is necessary and typically is included in a call center contract.

“What the service level goal will do is establish that Alorica must maintain a certain level of service, like 80 percent of the calls need to be answered within a certain amount of time,” said Las Vegan Letitia L’Heureux, who has managed call centers and conducted corporate training on call center operations and technology.

L’Heureux, who is currently unemployed, suspected something was amiss after having difficulty reaching a call center representative after filing for unemployment benefits in May. She has reached a representative only once.

“Every five minutes, I’m dialing back,” she said. “I haven’t been able to get through in weeks, and I try every day. I don’t sit for more than an hour at a time, but still, and I’m trying both the Spanish and the English line.”

‘What are you doing?’

“There’s actually nothing in here that says ‘We’re going to do a good job,’ ” he said. “Because 100 is such a nice round number, it looks to me that somebody pulled it out of the air. There’s no service level, no handle time estimated — both of which would be indicative of somebody having done an analysis — so I don’t suspect they did one.”

Taylor said it’s possible the metrics are missing because the contract was quickly assembled. After all, nearly every state was scrambling to process a record number of unemployment claims following the economic disaster resulting from the coronavirus pandemic.

“There’s nothing wrong with pulling a (staff) number out of the air to start, but if that was April 15, what are you doing since then?” he said.

It appears discussions between DETR and Alorica started as early as April 6.

An April 8 letter from Alorica’s Vice President of Sales Aimee Ford to former DETR Deputy Director Dennis Perea outlines the company’s cost proposal, noting that it can “provide a shorter contract length … given many of the unknowns during these challenging times” and indicates the pair had an informational call April 6.

“
Because 100 is such a nice round number it looks to me that somebody pulled it out of the air. There’s no service level, no handle time estimated — both of which would be indicative of somebody having done an analysis — so I don’t suspect they did one.
COLIN TAYLOR, CEO OF CONTACT CENTER CONSULTING FIRM THE TAYLOR REACH GROUP INC.

A District Court document related to an ongoing lawsuit on behalf of self-employed workers against DETR outlines why the department chose Alorica.

“They had the lowest price, they had facilities in Nevada, they had background checked folks ready to go, and agreed to actively recruit in Nevada,” according to the independently prepared report by judge-appointed Special Master Jason Guinasso.

Alorica is required to submit a daily call report to DETR with information such as total calls answered, longest wait time, average hold times, and the number of instances that callers hung up the phone.

The Review-Journal obtained a copy of the daily call logs in a report that compiled numbers from April 16 to July 6. Data showing the share of total calls to the center that were answered was not broken out in the report. Although Alorica provided what DETR required, the call logs fail to provide a complete picture of how responsive the call center has been in helping frustrated claimants.

For example, many days over the course of the four months have no reported data and simply say zero.

The shortcomings of DETR’s contract with Alorica are even more apparent when compared with contracts between third-party call centers and employment agencies in other states, such as California and Vermont. Both states paid out initial claims faster than Nevada and other states based on a Review-Journal analysis in June.

While DETR opted for an eight-month contract, California’s Employment Development Department created a two-month contract with an option to extend based on performance benchmarks.

It hired consulting giant Deloitte in April to manage its call center operations at a cost of about $11.1 million for an initial team of 500 full-time agents and the deployment of a chatbot for claimants. The state extended its contract in March for an additional $5 million.

The contract extensively detailed expectations of Deloitte, including making sure call center agents “answer, diagnose and resolve or properly transfer if outside of an agreed set of call drivers,” and mandated the creation of a “command center” with project managers and analysts and weekly meetings to “discuss staffing levels required to address the call volume.”

The contract also outlined how problems should be escalated through the chain of command within California’s employment office — and even specified the size of paper (letter size) Deloitte must use when sending paper materials to the Employment Development Department.

Vermont’s Department of Labor took a similar approach with its third-party call center, Maximus, hiring the firm in April for three months with an option to extend in three-month increments until April 2021.

“
I might encourage Nevada to think about…what kind of technology do (they) have to allow people to self-serve versus putting undue demand on live staff.
JONATHAN COGSWELL, PRESIDENT OF CONTACT CENTER CONSULTING FIRM COPPERBEECH ASSOCIATES

It requested 50 agents with the ability to add up to a maximum of 100 people at weekly intervals. But it amended the contract the following month by increasing the budget from $2 million to $17 million and asked for a maximum addition of 400 agents each week with total staff not to exceed 700. There’s also a mention of a virtual agent and webchat feature.

Vermont mandated “calls will average 10 minutes and, based on that assumption, that an agent will be able to answer on average 50-60 calls per day” but noted adjustments in staffing will be made depending on call volume, which was to be reviewed weekly.

“Big difference between engaging Alorica directly and engaging somebody like Deloitte, a major consulting firm. You can see it in the pricing,” he said.

DETR paid for its Alorica contract with federal funds — each state received administrative funding for its employment offices as part of the $2 trillion federal coronavirus economic relief package. It’s unclear how much of the California and Vermont call center contracts were paid for with federal funds.

But Cogswell said an important metric worth comparing between Nevada and the other states is its use of technology features — or lack thereof.

“I might encourage Nevada to think about … what kind of technology do (they) have to allow people to self-serve versus putting undue demand on live staff,” he said, citing California’s chatbot feature as an example.

Lau, the self-employed Nevadan who has been unable to get jobless benefits, said an online chat on DETR’s website could have been useful. But she stressed that she would rather have better communication from the department.

“They didn’t provide enough information (online) for people to self-help themselves,” she said. “And there’s no way to verify any information. They’ve had no transparency, no communication.”

All lines are busy

Meghin Delaney, spokeswoman for the governor’s office, said the office is briefed daily on DETR and understands staff is working to help process claims for jobless Nevadans.

“The Governor’s Office is aware of the issues caused by the unprecedented number of claimants calling the DETR and Alorica phone lines,” she said in a statement. “Members of the Governor’s Office have completed cross training with DETR to be able to help connect eligible Nevadans to resources.”

DETR hired the 100-person Alorica call center in April, when the department saw a record 300,000 initial claims in 30 days. Former DETR Director Tiffany Tyler-Garner said at the time it would “alleviate the enormous call volume flooding our current call centers.”

The call center started as a general help line for regular filers, and complaints soon poured in from claimants, reporting it as a “waste” after learning representatives couldn’t answer or help with specific claim issues.

“
The operator said she basically knew nothing and when I asked a tough question…we were disconnected.
L.J. “JEFF” WAYNE OF LAS VEGAS

When the call center switched in May to become the main contact for filers under the Pandemic Unemployment Assistance program, the federal program offering unemployment benefits to self-employed workers and independent contractors, similar complaints of unhelpful representatives poured in from those who were able to get through the busy phone line.

Las Vegan L.J. “Jeff” Wayne said he tried for weeks to contact an Alorica representative and finally was able to speak with someone in May.

“The operator said she basically knew nothing, and when I asked a tough question … we were disconnected,” Wayne said. “Waiting to receive money for survival is not something to be toyed with.”