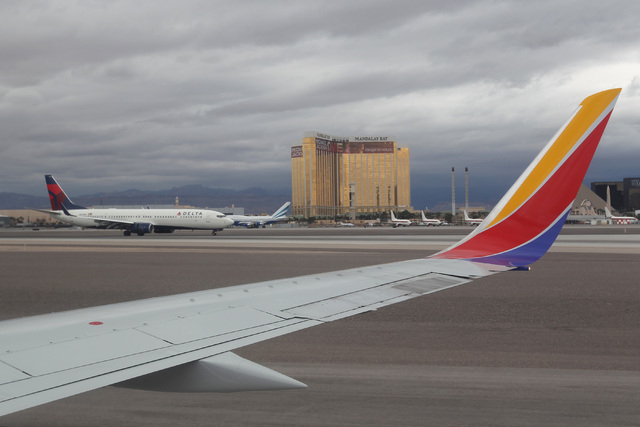 Passenger counts at McCarran International Airport started 2015 the way they left off in 2014 — with a slow and steady climb.

The Clark County Aviation Department reported Thursday that 3.3 million passengers passed through McCarran’s gates in January, a 0.3 percent increase over the same month a year earlier.

And the growth patterns continue to mimic 2014 with international traffic taking the lead and domestic traffic higher, but not significantly higher.

It was the 17th straight month of increases at McCarran with all but two of the months showing gains of less than 4 percent.

On the international side, Mexican and Canadian carriers continued to show strong performances that resulted in international traffic being up 4.5 percent to 251,909 passengers.

The strong international and domestic performances were offset by a steep decline at McCarran’s westside charter and helicopter terminals. Traffic was down 14.6 percent to 56,481 passengers, primarily due to the March shutdown of Heli-USA.

McCarran’s 3.3 million passengers in January were 1.8 percent fewer than the 3.4 million using the airport in December.

The National Finals Rodeo attracted thousands of visitors in early December and locals greeted family and friends or left to visit them later in the month at Christmas and New Year’s Eve.

January, generally a big convention month for Las Vegas, saw the arrival of record attendance at the International Consumer Electronics Show early in the month.