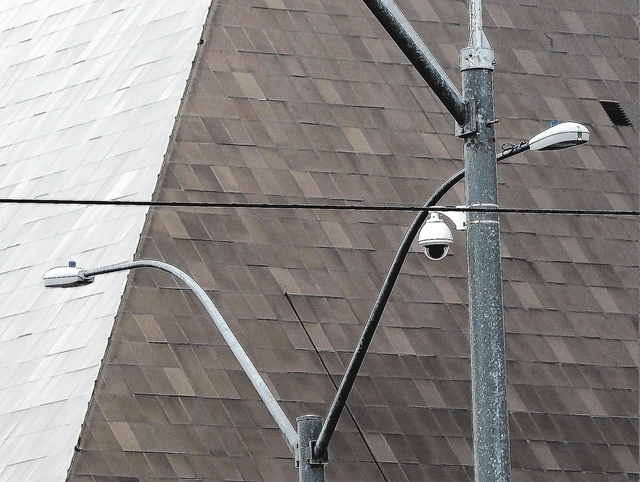 The next time you find yourself walking along the Strip, look up and say “Cheese!”

Dotting the Strip are 37 recently installed, high-definition cameras hanging about 25 feet off the street that Las Vegas police say will help them better patrol the area that attracted nearly 30 million visitors in 2012.

“This is a very good force multiplier,” said Capt. Robert DuVall, who oversees much of the police activity in the resort corridor and surrounding areas. “With the use of these cameras, we can search a crowd in just minutes.”

The cameras add a much needed level of security for those traversing the Strip, according to DuVall.

“I don’t know that enough cops on this department exist to police the Strip as thoroughly as it would need to be.”

The Metropolitan Police Department was able to buy more than $300,000 worth of cameras and the software to monitor them through a federal grant awarded by the Department of Homeland Security.

The overt, oscillating cameras, which have been in operation for about two months, were placed along Las Vegas Boulevard, from Sahara Avenue to the Welcome to Las Vegas sign near Russell Road.

The cameras, most of which are attached to street lights by a bright white arm, are meant to be seen by the public. DuVall said the cameras not only aid in solving incidents but also add a visual deterrent to those who might consider committing a crime.

Clark County spokesman Erik Pappa said the Resort Corridor Workgroup, a coalition of county representatives and resort executives, recommended installation of the cameras in April 2012 after voicing concerns about visitors’ experiences on the Strip.

DuVall said the cameras, monitored by police at the Convention Center Area Command office in a room that resembles a coat closet, have already proven vital in helping solve several crimes, especially robberies and thefts.

“Anywhere you have the kind of money, the kind of activity that you have on the Las Vegas Strip, it’s always going to bring in folks who want to steal it, rob it, take it away,” DuVall said. “This is just our latest tool in trying to combat that.”

Before the recent installation, Las Vegas police had only eight cameras monitoring the Strip, and most were at a much higher vantage than the newer ones.

DuVall said the new cameras offer a much better view of the sidewalks and streets than the older ones did.

Some critics are still leery of the potential uses of the cameras.

Allen Lichtenstein, general counsel for the American Civil Liberties Union of Nevada, said while those on a public sidewalk do not really have a reasonable expectation of privacy, he worries about the police’s use and storage of the footage, and added that the extra surveillance may not be worth giving up privacy.

“Over the last decade or two, we’ve given up a great deal of our privacy. A lot of which is not really necessary,” Lichtenstein said. “The lack of accountability and transparency is something that we should all be concerned with.”

“We’re well beyond the point of ‘1984,’” he added, referencing George Orwell’s novel about the world being under complete surveillance by a totalitarian government.

DuVall, however, insisted that the public’s privacy is not at risk.

“We’re not looking at anything other than criminal or suspicious activity,” he said.

DuVall said authorities keep 14 days of footage, which can be viewed only by the Metropolitan Police Department and the Department of Homeland Security.