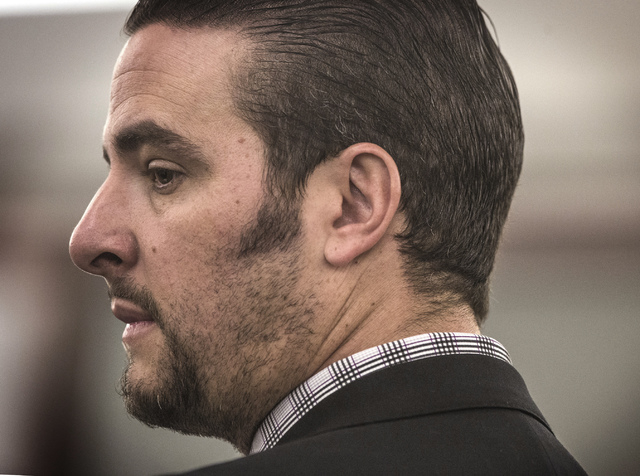 Defense lawyer Brian Bloomfield as seen during his guilty plea in Clark County District Court on Wednesday, Dec. 11, 2013. Bloomfield is plead guilty for providing prostitutes and other defendants with phony certificates of completion for court-ordered counseling and community service to resolve misdemeanor cases in Las Vegas Justice Court. He is agreeing to cooperate against several other defendants. (Jeff Scheid/Las Vegas Review-Journal)

The State Bar of Nevada plans to file a professional misconduct complaint against convicted defense lawyer Brian Bloomfield that could result in his disbarment, the organization’s chief counsel says in court papers.

“As the State Bar is still investigating this case, it cannot speak to the exact sanction it will be seeking, but at the very (minimum) a case of this proportion is equivalent to a suspension, if not disbarment,” wrote Bar Counsel David Clark in papers filed this week with the Nevada Supreme Court.

Clark filed a petition with the high court last month seeking Bloomfield’s temporary suspension while the bar proceeds with the disciplinary proceedings. Bloomfield’s lawyer, William Terry, is fighting the move.

Bloomfield, a member of the State Bar since 2003, pleaded guilty in District Court six months ago in a sweeping courthouse counseling scheme. He pleaded guilty to felony charges of forgery and offering a false instrument for filing or record and two gross misdemeanors, conspiring to commit a crime and destruction of evidence.

But he still hasn’t been sentenced because he is cooperating with prosecutors against other defendants charged in the scheme, which occurred between February 2008 and May 2010. Prosecutors have to be satisfied with the extent of his cooperation against the other defendants, who have yet to go to trial, before he can be sentenced.

While free on bail, Bloomfield continues to go through his daily routine showing up in court at the Regional Justice Center to defend clients in criminal cases. He recently won permission from the district judge presiding over his case, Jessie Walsh, to get back his passport so he can travel to the “Mexican Riviera” for a vacation with his family.

Clark has not taken kindly to Bloomfield’s continued work as a defense lawyer in the aftermath of his convictions.

“Aside from being felony convictions, respondent’s crimes constitute direct fraud upon the court and the complete betrayal of his duties as a sworn officer of the court,” Clark wrote last month. “Respondent’s continued practice before the courts in Nevada is an affront to the public integrity of the legal system and the administration of justice.”

Clark calls Bloomfield a “threat to the public” in his latest court papers.

“Public protection and perception of lawyers is of utmost importance,” Clark said.

The criminal case against Bloomfield dates to December 2011, when he, former counseling service owner Steven Brox and juvenile probation officer Robert Chiodini were charged in a 52-count indictment.

They were accused of providing prostitutes and other defendants with phony certificates of completion for court-ordered counseling and community service to resolve misdemeanor cases in Las Vegas Justice Court.

As of Wednesday, none of Bloomfield’s co-defendants have struck plea deals with prosecutors. No firm trial date has been set in the case.