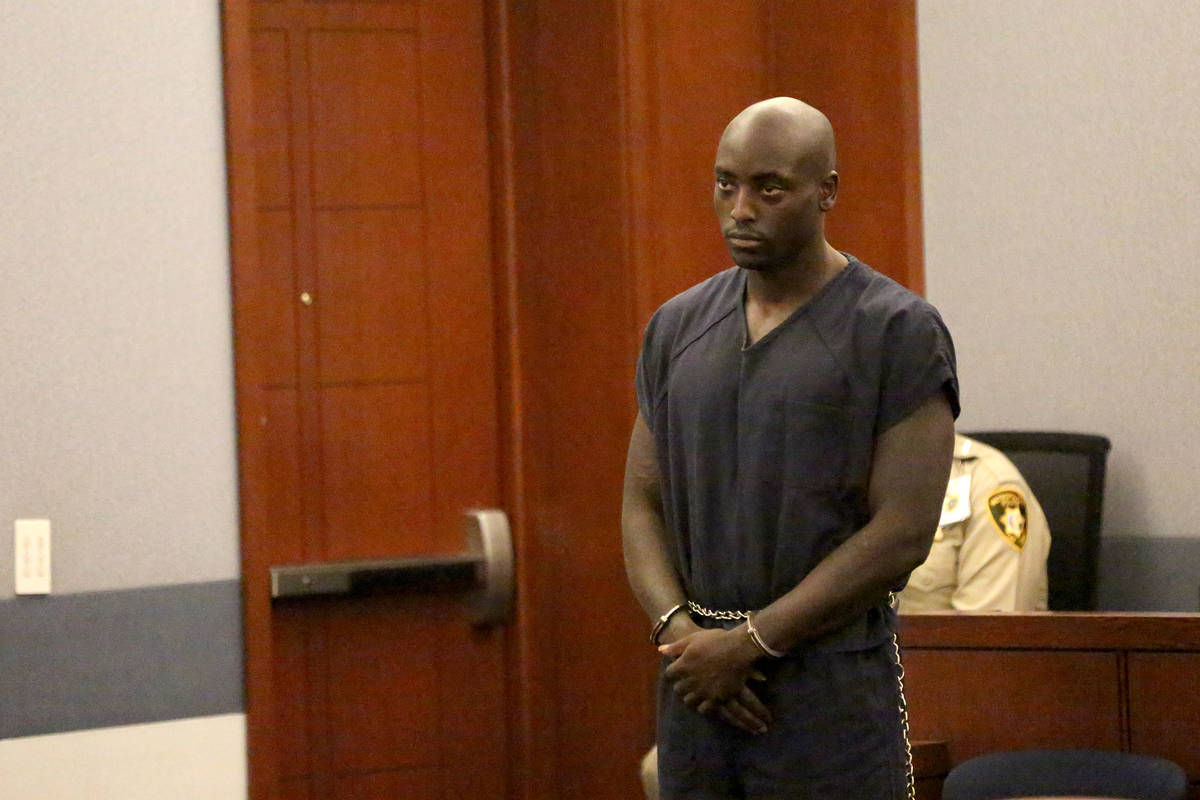 Former NFL player Cierre Wood, who along with his girlfriend, is charged with first-degree murder in the death of her 5-year-old daughter, La’Rayah Patra Nicole Lamont Davis, appears in court on Tuesday, May 21, 2019. (Michael Quine/Las Vegas Review-Journal) @Vegas88s

A former professional football player charged in the death of his girlfriend’s 5-year-old daughter wants his bail lowered.

Cierre Wood, 29, filed a federal complaint this month against Clark County Sheriff Joe Lombardo, asking a judge to find that the defendant’s constitutional rights against unreasonable bail had been violated. He is being held at the Clark County Detention Center on $500,000 bail, which was set in July 2019.

In his complaint, which Wood filed on his own behalf, he cited an April decision from the Nevada Supreme Court, which urged judges to steer away from the monetary system when possible.

“By imposing a bail of 500,000 the Eighth Judicial District Court has in essence imposed a prison sentence on petitioner Cierre Wood,” he wrote. “Wood as well as most inmates has no means of paying a 500,000 bail, therefore petitioners bail is unconstitutional.”

It’s unclear why Wood filed the lawsuit against Lombardo, as the bail was set by District Judge Michael Villani.

Wood, who prosecutors said contributed to “at least 100” bruises on the body of La’Rayah Patra Nicole Lamont Davis, called himself a “positive member of the community.”

He wrote that he was being held in a “special unit for individual accused of crimes against kids.”

In the filing, Wood, a former running back for Notre Dame and practice squad player on several NFL teams, suggested that prosecutors had “no evidence to convict on murder.”

Wood and the girl’s mother, Amy Taylor, 26, face a charge of first-degree murder with 20 counts of child abuse.

Taylor told police she disciplined the girl by sitting on her and with spankings, using her hand or a belt. Taylor also said she left the girl with Wood while at work one day and returned home to find her “mutilated,” according to Chief Deputy District Attorney Michelle Jobe.

Wood told police he preferred exercise to spanking because the girl was not his daughter.

Wood told police that he made the girl do sit-ups and run laps in an apartment as punishment, according to an arrest report. He chose that method because he was trying to get her “on the right path due to her being ‘chunky,’” he told detectives.

No court date had been set on Wood’s complaint. He is due back in court in December on the murder charge.