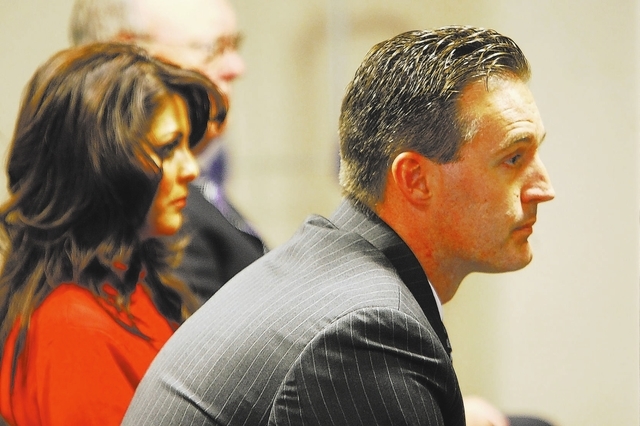 GARY THOMPSON/REVIEW-JOURNAL Chiropractor Dr. Stephen Shaw, right, appears before the Chiropractic Physicians' Board accompanied by his wife Raquel Friday, Nov. 30, 2007, for his hearing in connection with fighting with a man which led to the man's death. Shaw was sentenced to five years probation in Clark County District Court in May earlier this year, for the March 2005 incident in which Shaw pushed 60-year-old Lawrence Weiss during an altercation at Fabulous Freddy's car wash causing him to fall and suffer a fatal head injury. Weiss was allegedly berating and threatening Shaw's wife before the incident.

A Las Vegas chiropractor’s wife conspired with his employer to conceal his assets and help him avoid paying a hefty judgment, a civil jury ruled Thursday.

Sheri Weiss said she filed the case as part of her longstanding effort to hold chiropractor Stephen Shaw accountable for her husband’s 2005 death, which occurred after Shaw shoved the older man and caused him to fall.

“It’s just such a relief, and I just feel like it’s all been worth it, all this, because they didn’t get away with it,” the tearful widow said after hearing the verdict.

The jury found Shaw’s wife, Raquel, conspired with Dr. Raymond Nicholl and Rainbow Injury Rehabilitation clinic to harm Weiss by fraudulently transferring Shaw’s assets. The jury awarded about $17,000 in damages but also ruled that additional punitive damages should be assessed against all three defendants.

District Judge Mark Denton asked the jury to return Tuesday for the punitive damages phase of the trial.

None of the defendants were in court when the jury’s decision was announced.

Weiss initially named Shaw a defendant, but he resolved the claims by offering to have a $200,000 judgment entered against him. Weiss accepted.

In May 2007, then-District Judge Donald Mosley sentenced Shaw to five years of probation. The judge ordered no fine or restitution. But a jury in 2009 found Shaw liable for the death and awarded nearly $2.5 million to Sheri Weiss.

Before that jury could determine punitive damages, Shaw and his wife filed for bankruptcy, temporarily halting the proceedings.

Later that year, a bankruptcy judge ruled that Shaw could not avoid paying the civil damages by declaring bankruptcy.

In 2011, the parties stipulated to a judgment that set punitive damages at $1,000. Sheri Weiss also filed a new lawsuit that accused Shaw and his wife of trying to hide their assets.

The 2005 incident was triggered by an argument between Raquel Shaw and Lawrence Weiss, who believed the woman had cut him off as they drove into the Fabulous Freddy’s car wash at Fort Apache Road and Charleston Boulevard. Raquel Shaw called her husband, who rushed to the scene.

Lawrence Weiss was walking away when a witness heard Stephen Shaw say, “Pick on someone your own size.” Stephen Shaw then pushed the smaller victim, according to a prosecutor’s account of the incident.

Stephen Shaw was 36 at the time. Lawrence Weiss was a retired record company executive.

According to the most recent complaint filed by Sheri Weiss, Stephen Shaw owned a chiropractic clinic on Rainbow Boulevard for more than 10 years. But Shaw testified in June 2011 that he had transferred his clinic’s equipment to Rainbow Injury Rehabilitation clinic, which Nicholl had opened at the same location.

Stephen Shaw also testified that the Rainbow clinic had hired him as an employee and was paying him $102,000 a year.

Sheri Weiss claimed it was reduced to thwart her collection efforts, but the Shaws’ attorney, Charles Rainey, argued that the chiropractor simply had lost his motivation to work and had voluntarily reduced his hours.

Under Nevada law, a creditor with a judgment may take only 25 percent of a person’s net wages.

Attorney David Mincin, who represents Sheri Weiss, said Rainbow hired Raquel Shaw to perform all the administrative functions that her husband once performed, and began paying her $6,000 a month, although she lacked a college degree or job experience.

Damages awarded to Sheri Weiss on Thursday represent the amount she would have collected if Stephen Shaw’s wages had not been reduced.