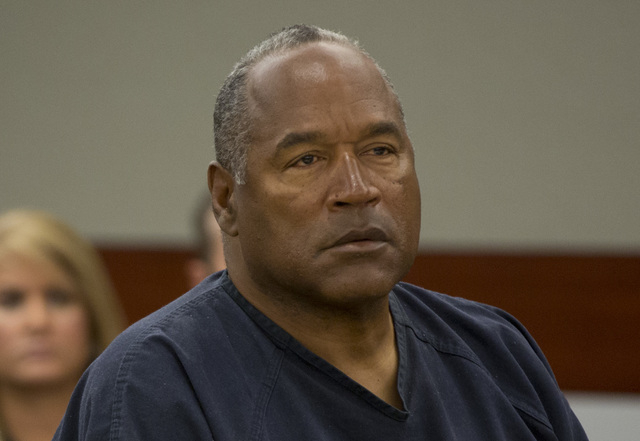 O.J. Simpson listens to audio recording played during an evidentiary hearing in Clark County District Court, Thursday, May 16, 2013 in Las Vegas. Simpson, who is currently serving a nine to 33-year sentence in state prison as a result of his October 2008 conviction for armed robbery and kidnapping charges, is using a writ of habeas corpus, to seek a new trial, claiming he had such bad representation that his conviction should be reversed. (AP Photo/ Julie Jacobson, Pool)

O.J. Simpson’s lengthy appeal was officially filed with the Nevada Supreme Court Wednesday, as the notorious former football player continues to seek a new trial in his 2007 robbery case.

Simpson is in the midst of serving a nine- to 33-year prison term after he was convicted of 10 charges for robbing two men of sports memorabilia in September 2007. He argued he was simply recovering his own property, including photographs, when he went to the Palace Station hotel room.

The appeal motion, written by defense lawyer Patricia Palm, was originally filed in May, but was not officially posted by the Supreme Court until Wednesday because it was about 5,000 words longer than the court usually allows. However, after a review the high court approved the longer version last week.

Galanter had a conflict of interest in the case, including “hiding his own pre-incident involvement and his failures to admit that involvement, in avoiding possible criminal liability, civil liability, reputation damage and professional discipline, and in obtaining more income and continuing publicity from a high profile case,” said the appeal, which relied heavily on Simpson’s own testimony during a hearing in May 2013.

Judge Linda Bell last year rejected the contention that Galanter told Simpson he could legally take his property back. “All grounds in the petition lack merit and, consequently are denied,” Bell said in her 100-page decision.

Bell ruled Simpson “failed to demonstrate that counsel experienced an actual conflict of interest that substantially impacted counsel’s performance at trial … that the State withheld exculpatory evidence … that appellate and trial counsel were ineffective or that any deficient performance by counsel resulted in prejudice,” the ruling stated.

Bell said the evidence was overwhelming against Simpson.

The post-conviction appeal filed Wednesday included arguments of misconduct prejudicial to Simpson when prosecutors brought up his acquittal in the killings of his ex-wife Nicole Brown Simpson and Ronald Goldman.

“The prosecutors’ opening statements and closing arguments were intended to create a theme that the jurors should convict Simpson because he had avoided answering for some past wrong which was obviously linked to the Goldmans’ civil judgment for the death of Ronald Goldman,” the appeal said.

Lawyer Palm argued that during opening arguments Galanter did not object when prosecutors told the jury “that Simpson’s trial was the ‘final chapter’ in a ‘pattern.’ The prosecutor stated that Simpson desired to keep Fredric Goldman from executing his civil judgment for the death of Ronald Goldman, and called this a ‘pattern of arrogance coupled with hypocrisy.’”

Testimony at the May 2013 hearing before Bell revealed that most of the items taken in the 2007 robbery were found to be the football player’s. The items were returned to Simpson and, unless sold, were not subject to satisfy a $33.5 million civil judgment against him for the deaths of Nicole Brown Simpson and Ronald Goldman.

Clark County prosecutors have 30 days to respond to the appeal. The high court would then decide if they will hold oral arguments in the case.

Meanwhile, Simpson is in the midst of serving one to six years on a weapons enhancement for the kidnapping count at Lovelock Correctional Center, about 100 miles northeast of Reno. He has four to 18 years left on his prison term on the remaining counts.