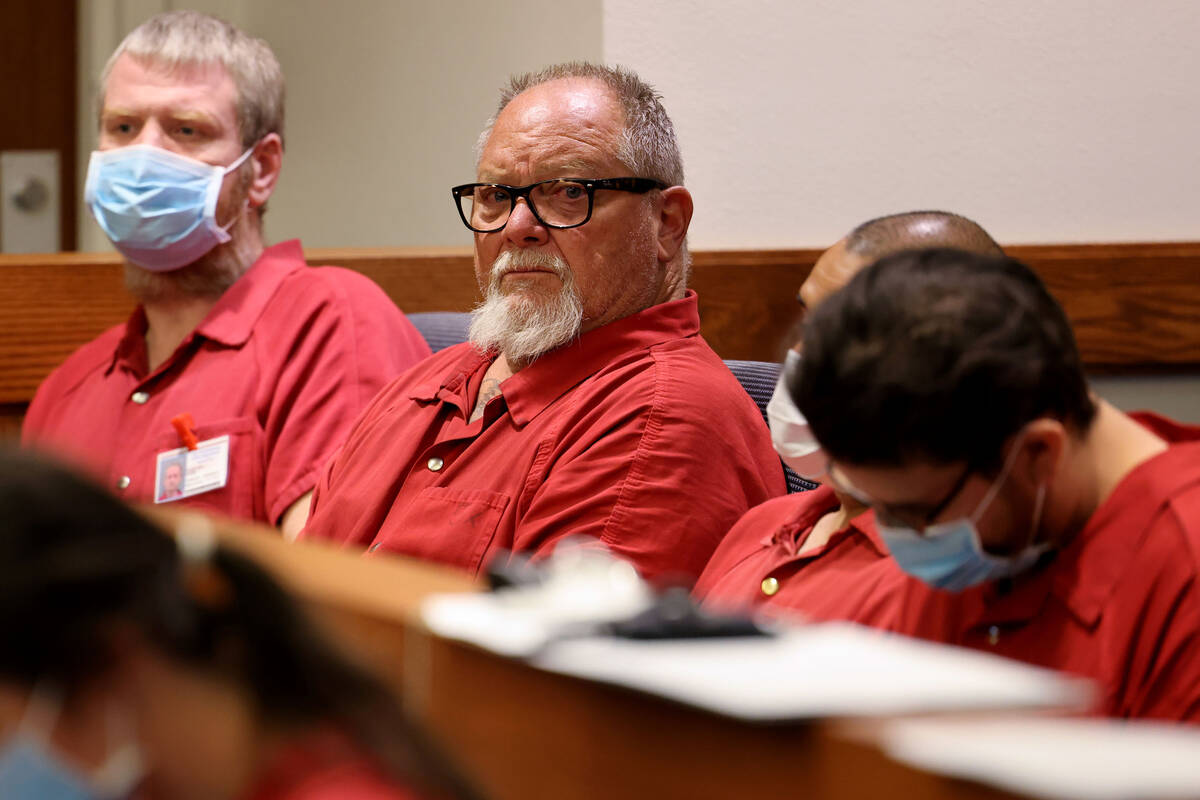 Richard Devries, 66, second from left, makes his initial court appearance in Henderson Justice Court on Thursday, June 2, 2022. He is a suspect in a shooting between Hells Angels and rival Vagos bikers on Sunday on U.S. Highway 95, according to police. (K.M. Cannon/Las Vegas Review-Journal) @KMCannonPhoto

One of three men arrested in connection with a shooting between members of the rival Hells Angels and the Vagos Motorcycle Club filed a petition Friday to be granted a lower bail.

A Henderson Police Department arrest report described 66-year-old Richard Devries as the president of the Las Vegas chapter of the Hells Angels. On Thursday, Justice of the Peace David Gibson Sr. set bail at $380,000 for Devries and two co-defendants, who officials said were Hells Angels prospects.

Devries’ defense attorney Richard Schonfeld, had initially asked for a bail of $50,000. Schonfeld argued Thursday that a higher bail was not necessary because Devries has a stable employment history, has lived in Las Vegas for 19 years, has no prior criminal history, and is an honorably discharged military veteran.

“It is respectfully submitted that the Justice Court’s bail setting of $380,000 is an amount that is excessive and tantamount to no bail, which is a violation of both the Nevada Constitution and the United States Constitution,” Schonfeld wrote in the petition filed Friday in District Court.

Schonfeld also argued Thursday that members of other motorcycle clubs had been granted lower bails in other high-profile cases involving the groups.

Gibson said Thursday that a high bail was appropriate in the case to prevent further violence.

“I can’t predict the future, but I can kind of control it,” he said.

Schonfeld wrote in the petition that official reports do not identify Devries “as having possessed a weapon, fired a weapon, or engaged in any of the conduct charged.”

The same Hells Angels then “began to cause problems” with the Vagos group at the Southern Nevada Veterans Memorial Cemetery in Boulder City, the report said.

Six Vagos riders were injured, along with a member of the Hells Angels, prosecutors said.

Chief Deputy District Attorney Danielle “Pieper” Chio said Thursday that the shooting may have been in retaliation for an April shooting in San Bernardino, California, in which a Hells Angels member was killed.