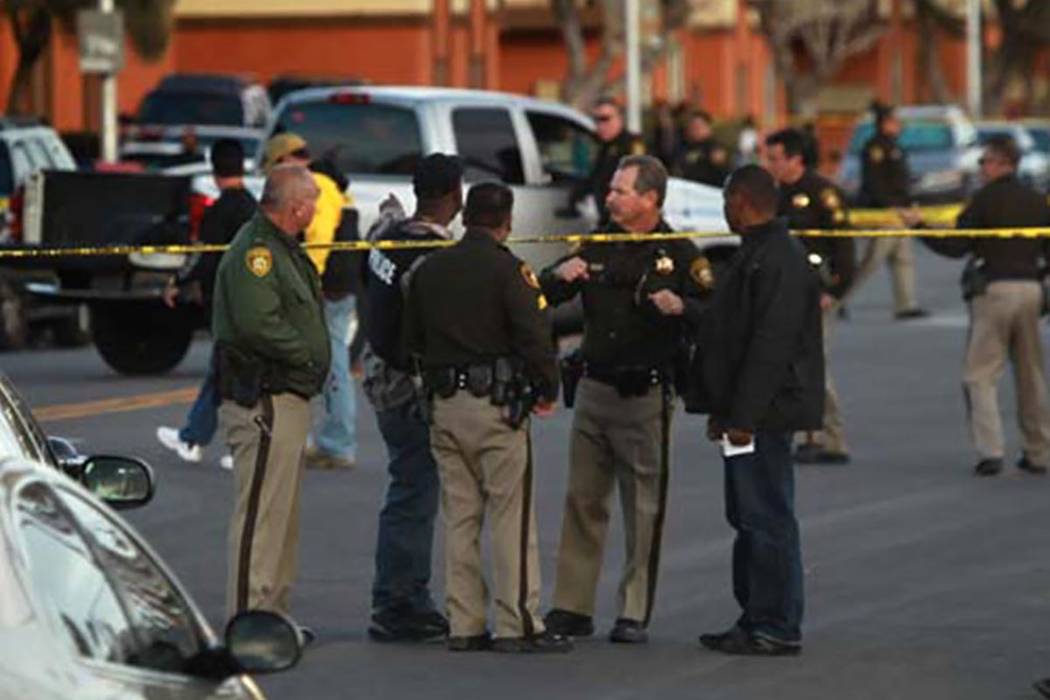 A federal jury began hearing evidence Monday in a civil rights lawsuit against the Metropolitan Police Department and three officers involved in a February 2013 shooting.

Plaintiffs Angel Landeros and Amelia Villalba, who testified Monday, were negotiating a vehicle sale with Roberto Torres, a man wanted for attempted murder, when three Metro officers approached them at an apartment complex on the 4100 block of Pennwood Avenue, near Valley View Boulevard.

According to court documents, one of the officers, Scott Thomas, was part of a team planning to arrest Torres. The other two officers, Joseph Parra and Clyde Villanueva, were there to identify Torres. Parra and Villanueava’s sergeant ordered the pair to leave the scene after identifying Torres.

Torres asked Landeros and Villalba if he could test drive the vehicle, and all three officers moved in to make an arrest when they saw the trio heading toward the vehicle.

Landeros and Villalba were struck when police opened fire on Torres, whom police said shot his pregnant girlfriend in the head the day before. A bullet passed through Landeros’ arm and into the left side of his body, lodging itself in his spine, according to the suit. A ricocheted bullet grazed Villalba’s ankle.

Torres was armed at the time of the shooting. Police said Torres drew a gun and shot at officers before they opened fire. Parra fired a shot in retaliation, and Thomas shot Torres six times, killing him.

Landeros said in his testimony Monday that he didn’t see Torres reach for a gun until after he’d been shot. Landeros said that after he fell to the ground he saw Torres fumble and drop the gun as he tried to pull it from his waistband.

He said he didn’t hear any gunshots before he was shot, and was looking at Parra and Villanueva when police fired. Torres was standing behind Landeros.

Landeros and Villalba both were handcuffed after the shooting. Landeros said he was only handcuffed for about a minute before he was released for medical treatment. Villalba testified through an interpreter Monday and said she was handcuffed for hours before she was interviewed and released.

The suit alleges that Landeros and Villalba’s Fourth Amendment rights were violated because it was “unreasonable” for the officers to open fire on, then handcuff the pair when they were not suspected of any crime.

“At the very minimum,” the suit states, “the Defendants were negligent in their actions as two innocent people were subjected to both physical and emotional harm.”

According to documents filed on behalf of the officers, Torres previously led police on an hourslong vehicle chase and was known to be armed. The defense argues that the officers acted appropriately in the situation and did not purposefully fire at Landeros or Villalba.

The officers are expected to testify in the trial Tuesday morning.

Editor’s note: A previous version of this story incorrectly identified an amendment to the U.S. Constitution.