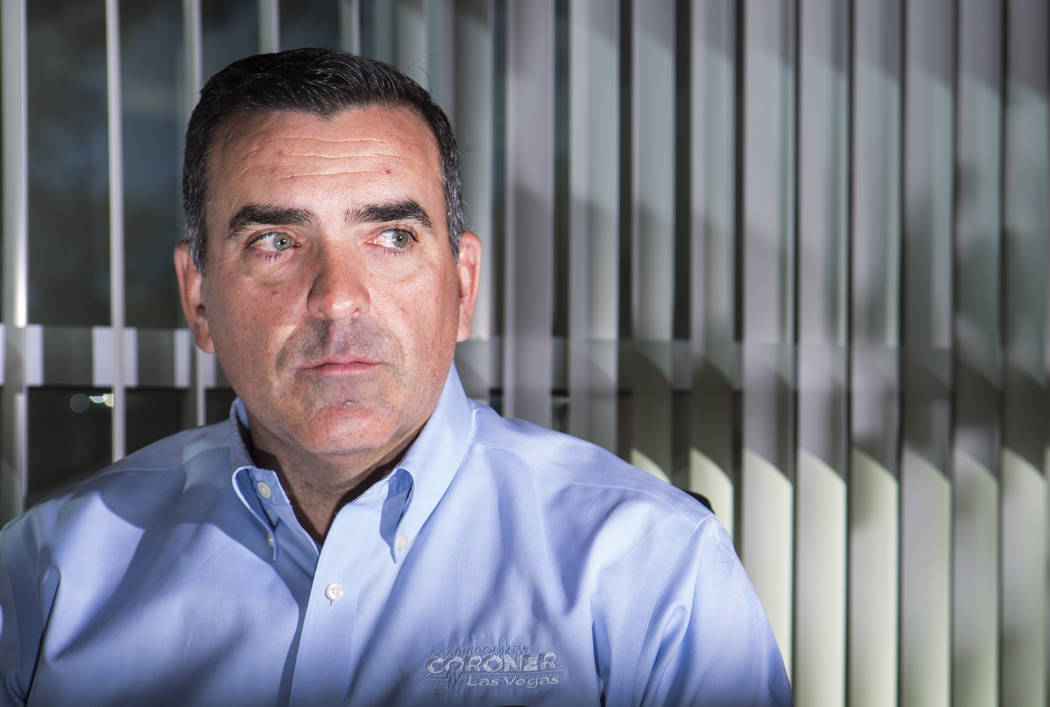 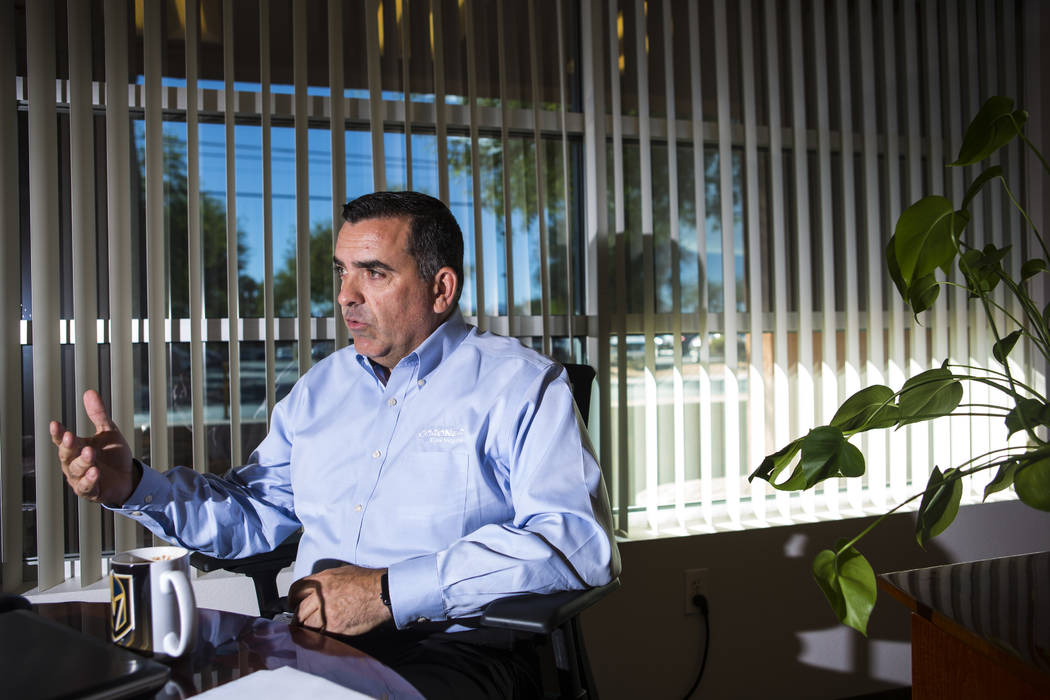 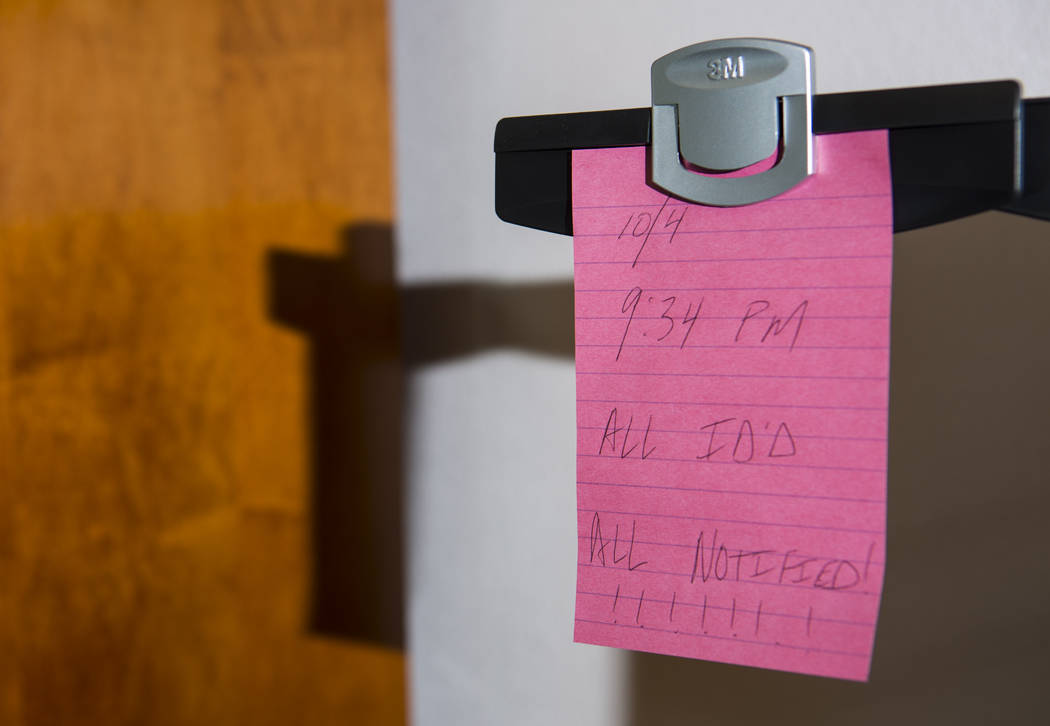 A note that Clark County Coroner John Fudenberg keeps in his office, written after the next of kin for each of the 58 victims from the Oct. 1 shooting were notified, as shown in Las Vegas on Thursday, Sept. 13, 2018. Chase Stevens Las Vegas Review-Journal @csstevensphoto 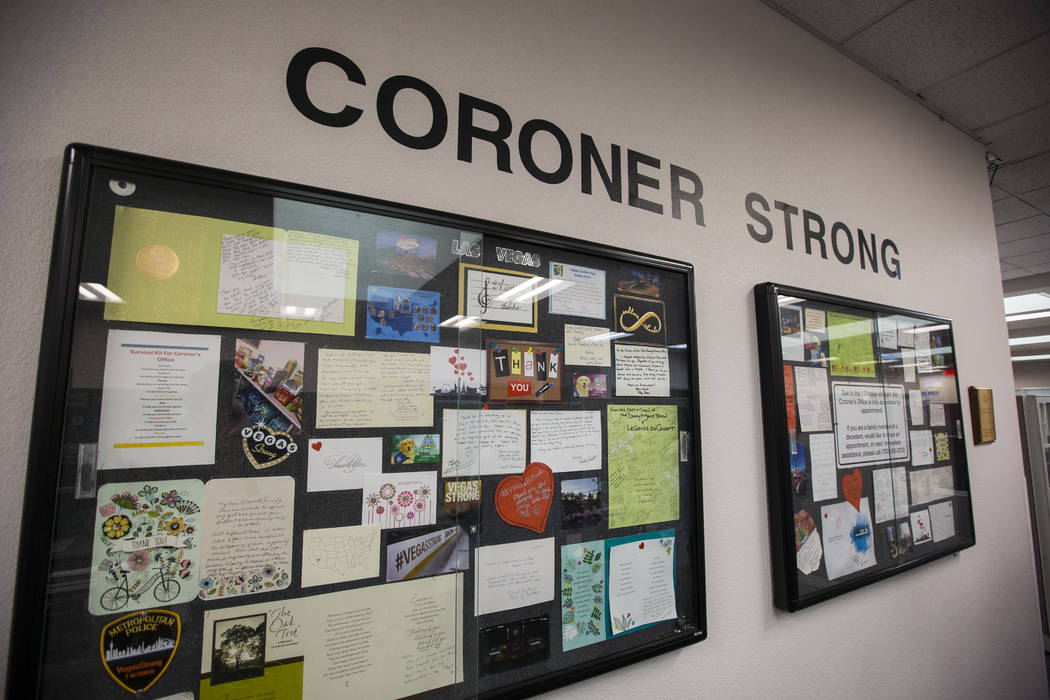 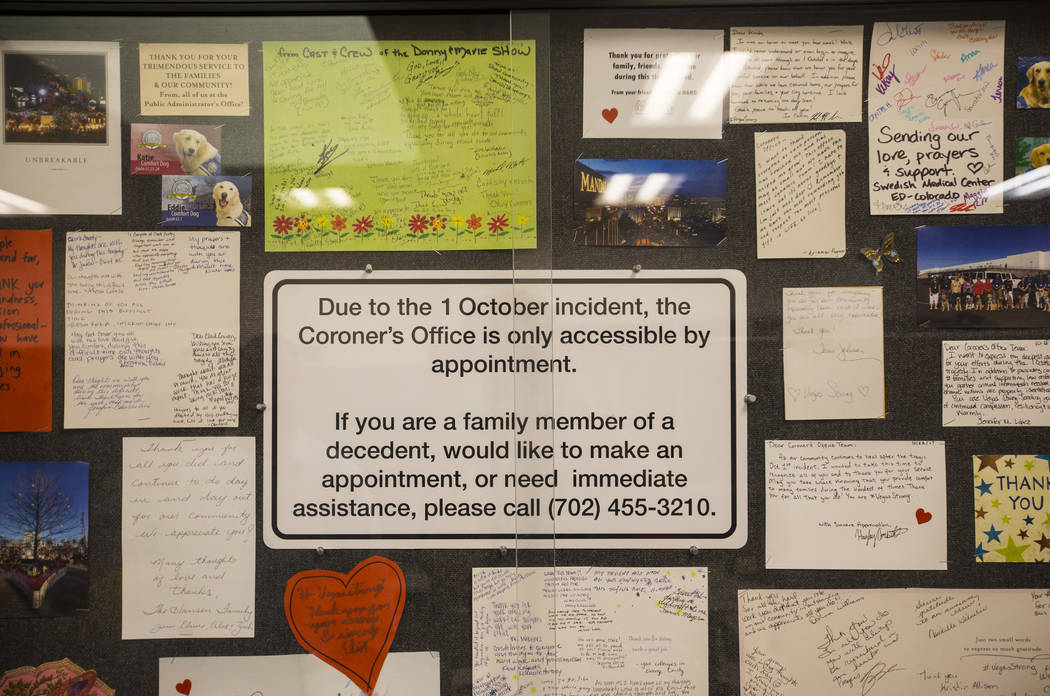 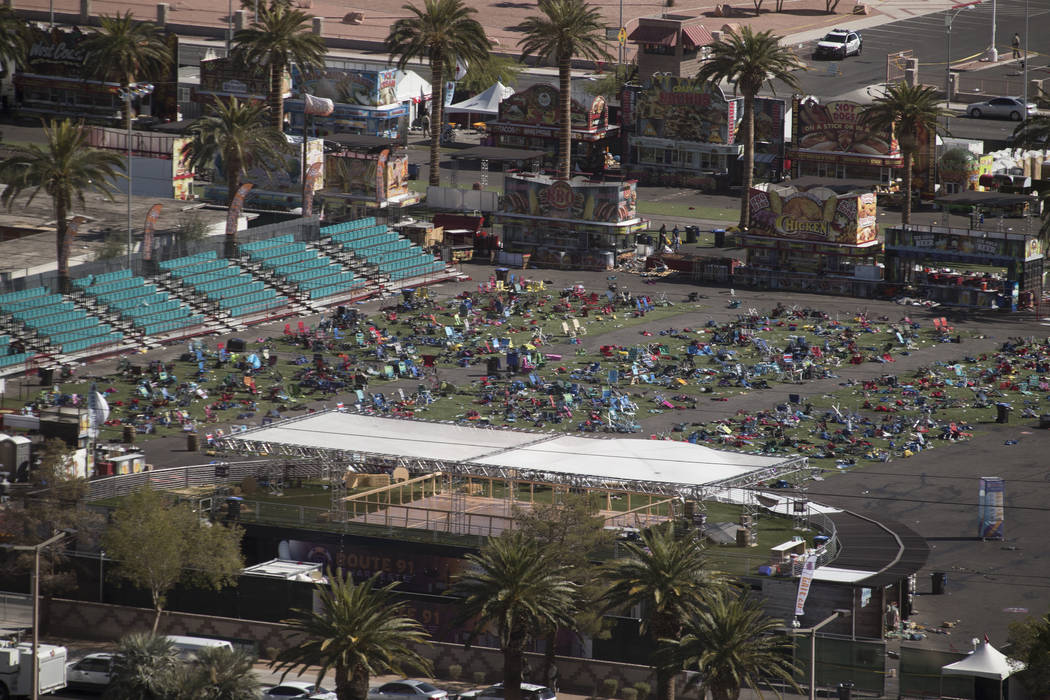 It was as if everyone had suddenly vanished.

The stage was long empty. And someone had cut the lights.

It was mostly quiet. Windy. Sometimes, a strong gust kicked up the empty water bottles and red Solo Cups that littered the lawn, slamming the debris into Clark County Coroner John Fudenberg’s shins.

There were phones, too, as far as his eyes could see. They glowed like fireflies with incoming calls and texts that their owners could not answer.

Fudenberg pressed forward with a handful of staff, documenting and counting body after body. There were so many bodies.

“Looking beyond them and seeing more and more, that was the big difference,” Fudenberg told the Las Vegas Review-Journal this month, in his only extensive interview since the attack. “We usually know exactly what we’re dealing with, but here we didn’t.”

Members of his team who weren’t at the scene that night were at hospitals, tracking the dead and collecting identifying items and information. Others began setting up the family reunification center, where too many parents and children and brothers and sisters in the days ahead learned news that no one should have to hear.

“We call ourselves the last of the first responders,” Fudenberg said. “When the police are done securing the scene, when the firefighters and hospitals are done saving who they can, we’re just getting started.”

The work would continue for months.

Fudenberg was supposed to be there, at Route 91 that Sunday night, where he ended up anyway.

A friend had an extra ticket. They were supposed to meet at the Golden Knights game that evening, then walk over to the festival. But his friend missed the game, so Fudenberg skipped the concert.

The Knights lost. It was a blast anyway — his first time watching them at T-Mobile Arena. After, Fudenberg enjoyed a nice dinner at the Aria. But work loomed in the morning, so just before 10 p.m., he hailed an Uber and headed home.

He was in the back of that Uber when he got the call.

“There’s an active shooter at Mandalay Bay,” an investigator at his office told him. “At least 20 people are dead.”

In the background of the phone call, he could hear it: a barrage of gunshots booming out of the small police radio on the investigator’s desk. He knew this was real.

The Uber kept going and so did he. One by one, Fudenberg called his staff and warned them of what was ahead.

“They know what responding to this means,” he said. “It’s going to be months and months of work. It’s going to change our office and our lives forever.”

Cellphone still against one ear, Fudenberg made it home.

He started up his Keurig first, brewing fresh coffee. Then he took a shower, packed a bag and left for the festival grounds.

Notifying next of kin

Once the dead were accounted for, which was no small feat, the living needed to be notified.

“It’s the most emotionally taxing and exhausting part of the job,” Fudenberg said.

Even eleven months later, he still pauses to collect himself while thinking about it.

There is no standard death notification. But typically, forensic investigators only notify immediate relatives. And typically, they conduct no more than one notification per shift.

Oct. 1 was anything but typical.

“The day after, my staff and I notified three or four families per hour,” Fudenberg said.

Sometimes, those families consisted of 10 to 15 people. That’s because, with so many victims, it took a few days to notify everyone, which meant extended relatives had time to fly and drive to Las Vegas to support the numb next of kin still waiting for word.

But he and his staff did it anyway, again and again.

The last of the 58 victims died the afternoon of Oct. 3 at Sunrise Hospital and Medical Center. He was a father of three and grandfather of five.

The next evening, coroner staff conducted the last death notification at 9:34 p.m.

“I only remember that because I wrote it down when I found out and put it up there,” Fudenberg said, pointing at a spot in his office just to the left of his computer screen. “It hasn’t moved since.”

“I don’t know why I did that,” he said, staring at the note for a moment. “I guess you do weird things after experiencing something so significant.”

A note that Clark County Coroner John Fudenberg keeps in his office, written after the next of kin for each of the 58 victims from the Oct. 1 shooting were notified. Chase Stevens Las Vegas Review-Journal @csstevensphoto

In the back half of his office, where the dead are carefully examined, there wasn’t much room to walk in the days after Oct. 1.

Still, his staff made sure that the shooter’s body was separated from the 58 victims.

The gunman’s body stayed in the farthest corner of the farthest refrigerator for about four months as Fudenberg’s staff waited on the results of an extensive examination of the man’s brain and tissue samples.

“I think that was difficult for a lot of people, knowing that the shooter of this incident that rocked their worlds was in the same building where they came into work each day,” Fudenberg said.

The conspiracy theorists who harrassed him and his staff didn’t help either, he said.

More than once, security cameras or concerned employees caught people snooping around the building, trying to peek into windows and snap photos with their cellphones in the months after the attack. At least one Metropolitan Police Department officer monitored their office 24 hours a day, seven days a week for longer than Fudenberg would like to admit.

They even got a new security system, Fudenberg said. Now, grieving visitors can’t simply walk through the front door. There is a buzzer and an intercom system, and only those with appointments are allowed in.

“Just when you think you know how hard this job is,” Fudenberg said before trailing off. “We’ve had five people either resign or retire since Oct. 1, and I’m convinced it’s because they never want to experience anything like that ever again.”

I think that a whole lot of people in Las Vegas demonstrated after the shooting their willingness to help and support each other. I didn’t feel a sense of community before — that people would step up and support others. And they did.

He figured he would retire once he had 30 years under his belt, then maybe move back to Minnesota, where he is from.

“Now, I’m going to work longer and stay in Las Vegas,” he said, sipping coffee with protein powder out of a Golden Knights mug. “I don’t want to leave.”

It’s no secret what changed his mind.

“I think that a whole lot of people in Las Vegas demonstrated after the shooting their willingness to help and support each other,” Fudenberg said. “I didn’t feel a sense of community before — that people would step up and support others. And they did.”

His staff has come together in new ways, too. About 10 of them now have “Coroner Strong” tattoos. Many are still in touch with the 58 families, which Fudenberg considers an honor.

“We see in our office what 99 percent of people never will,” he said, “So we have to be aggressive in our wellness.”

His new mantra, which someone shared with him after the massacre, helps him get through the worst days.

“You’re never going to get back to normal,” the saying went. “You are going to settle into a new normal. And it doesn’t have to be bad.”