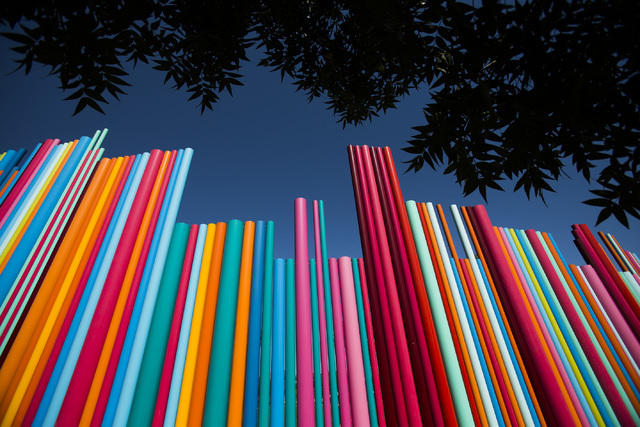 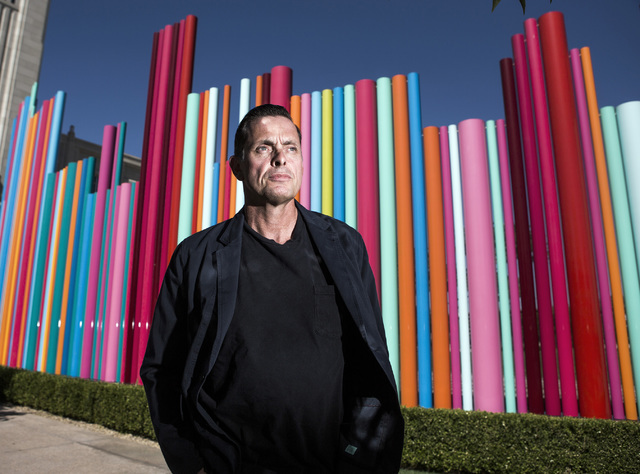 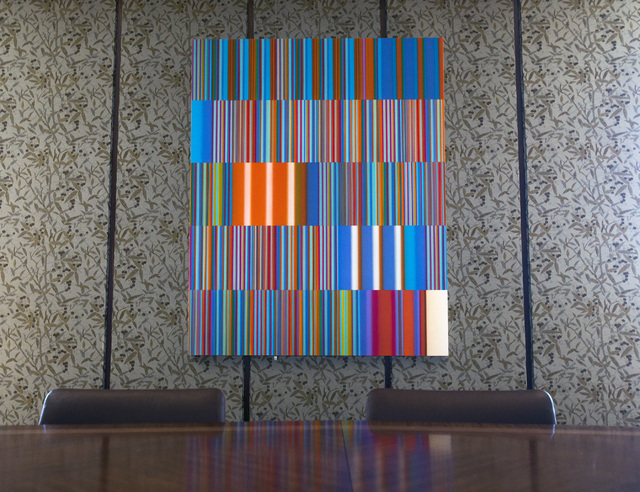 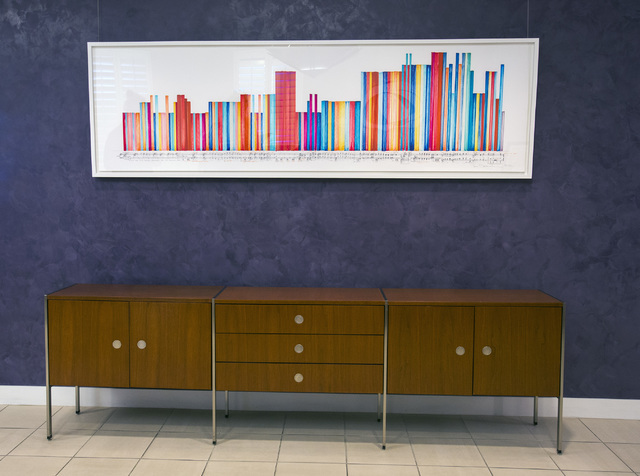 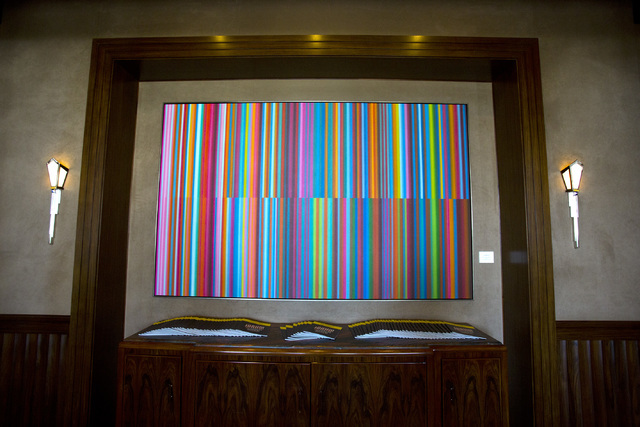 Fanfare (for the Common Man) art piece created by artist Tim Bavington is seen in the lobby at T The Smith Center for the Performing Arts on Tuesday, July 12, 2016. Jeff Scheid/Las Vegas Review-Journal Follow @jeffscheid 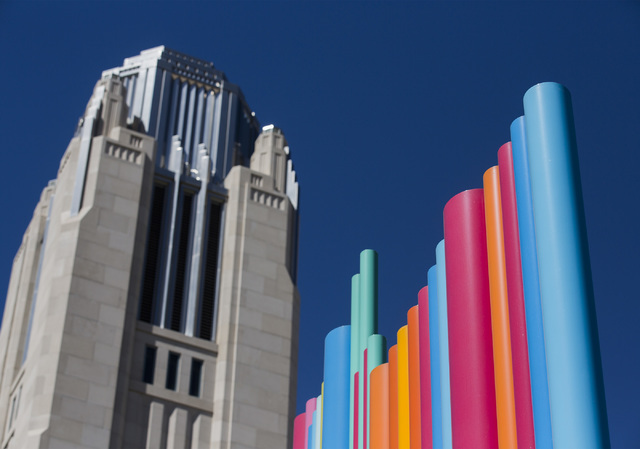 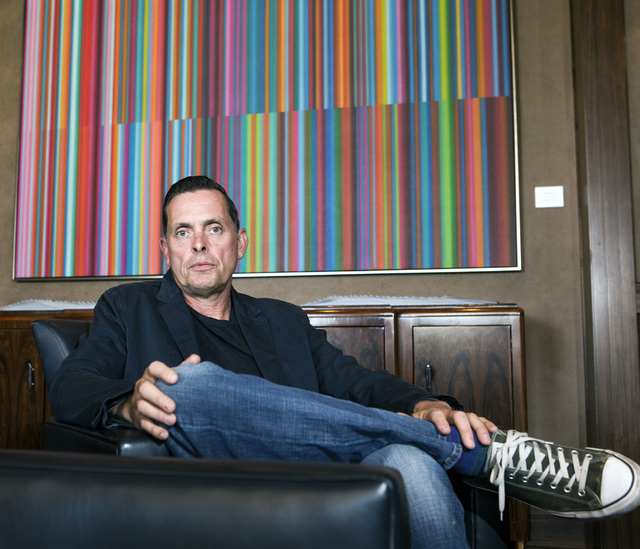 Artist Tim Bavington sits in front of the Fan Fare (for the Common Man) art piece he created located in the lobby of The Smith Center for the Performing Arts on Tuesday, July 12, 2016. Jeff Scheid/Las Vegas Review-Journal Follow @jeffscheid

For several years, Tim Bavington has been bridging the worlds of music and visual art in a dramatic way by transforming pieces of music into bands of color arranged on canvases and as sculptures.

But don’t assume that, as a fine artist, Bavington is any sort of musical snob. He’s applied his artistic transformations to everything from classical musical selections to pieces from jazz, pop and punk.

Southern Nevadans can examine Bavington’s technique in “Pipe Dream,” his outdoor sculpture at The Smith Center for the Performing Arts that is an interpretation of “Fanfare for the Common Man” by Aaron Copland. In addition, the center features other paintings by Bavington.

Bavington grew up in London and became acquainted with Las Vegas after his father, an auto salesman, moved here in 1976, when Bavington was a kid. Bavington later moved here himself, earning arts degrees in Pasadena and, then, at the University of Nevada, Las Vegas.

Today, he continues making art — including another music-inspired sculpture for a Dallas hotel based on the music of native son Stevie Ray Vaughan — and teaches at UNLV.

Review-Journal: When did you know that you wanted to pursue a career in art?

Bavington: I knew this was something I wanted to do when I was 5. I sometimes joke that, as an adult, I’m suffering from having chosen my avocation, my vocation, at age 5.

R-J: What first attracted you to art?

Bavington: In grade school, one of my friend’s dad was a well -known sculptor in England. He was part of the London (arts) scene He made these life-sized sculptures that were whimsical and really humorous.

R-J: What prompted you to begin exploring the connection between music and visual art?

Bavington: One of the earliest examples I know is in the record covers I grew up buying. In the late ’70s and early ’80s, the album cover artwork of the time was appropriating and referring to all kinds of avant garde art movements. So, from early on I saw Kandinsky fused with the music of the Damned and things like that. And, to me, it was just part of my natural evolution. I saw these things conflated and joined. But what you find out is that the relationship between visual art and music has always been extremely close and intertwined.

R-J: Has the art affected your view of the music?

Bavington: It gave me an avenue to greater appreciation of the music I love. The first thing I translated was a Jimi Hendrix electric guitar solo. Like, Hendrix and Coltrane, you really see no structure, no rules. You see it. Then, Scotty Moore and James Burton and those sort of finger-pick solos in early rock and roll. Think of Scotty Moore, who just died, and the guitar solo in “That’s Alright Mama,” the first Elvis Presley song that was sort of rock and roll.

Bavington: It wasn’t like I had a plan. It just kind of happened. There was no reason. I wasn’t going to leave to pursue (a career) in New York or a big city. Even while I was at UNLV, I was still a commercial artist. I did continue to do that, and then in the decade of the ’90s, everything became decentralized. You didn’t have to be in Hollywood to work in the entertainment industry, and what I was doing at that point was I drew, like, the Simpsons comics a lot, and I didn’t have to be there. I could do it from here.

R-J: How have things changed for beginning artists today, compared to what you experienced?