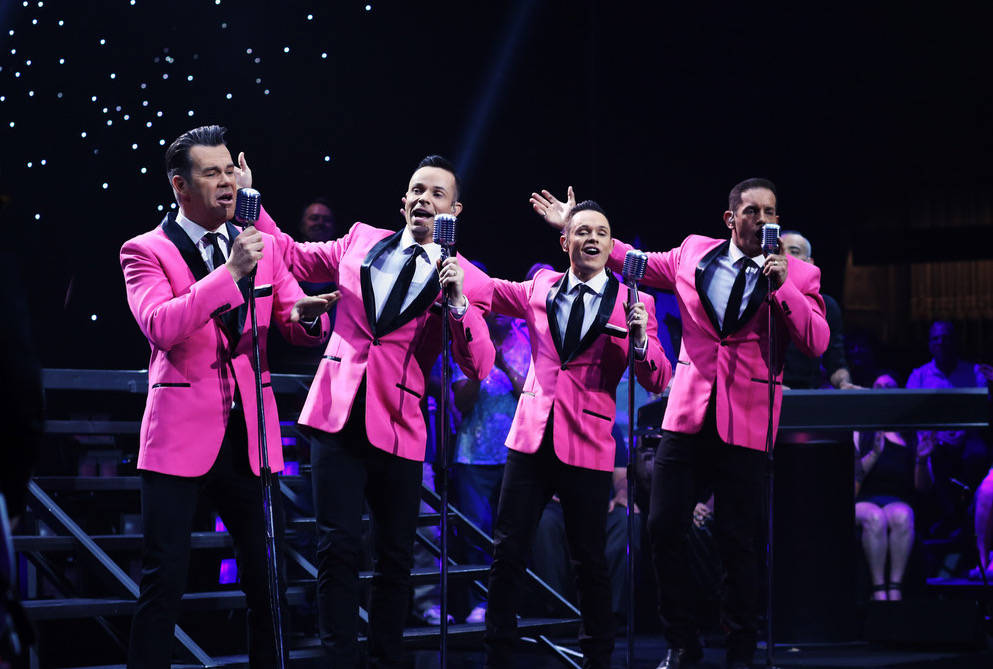 The lineup of Venetian headliners Human Nature, from left: Phil Burton, Andrew Tierney, Mike Tierney and Toby Allen, are shown at Venetian Theater during a taping for PBS on May 23, 2017. (Human Nature)

Further proof that Vegas has everything: You can even get a good Vegemite sandwich if what you’re craving has an Aussie vibe to it. Just ask Andrew Tierney, one-fourth of Human Nature and a man from Down Under: “If I’m missing Australia, I can always go to World Market in Vegas and get my Vegemite. I can go to Trader Joe’s for a meat pie. And at our shows, I can hear some uniquely Australian accents.”

Those belong to his bandmates and friends from high school who have created a pop culture phenomenon. Human Nature, Toby Allen, Phil Burton and brothers Andrew and Michael Tierney, just marked their 27th anniversary together in a major way. The group has a new PBS special on Thanksgiving weekend, “Human Nature: Jukebox — In Concert from The Venetian,” and a recently released CD, “Jukebox — The Ultimate Playlist,” which celebrates their ‘50s and ‘60s pop standards. In almost three decades together, Human Nature has sold more than 2.5 million albums, earned 27 platinum awards and 17 Top 40 hits.

For over eight years and more than 1,600 performances, they’ve taken the stage in Las Vegas at The Venetian during their residency, which adds a holiday twist beginning Friday.

RJ: After performing all week, how do you like to spend a typical Sunday?

Toby: My first choice would be going to have dim sum. There’s a great place called Orchids Garden, where the food is delicious and the people are great. We take our 4-year-old twins there.

Phil: Sunday is our day off, so I try to do family things with our 9-year-old and 3-year-old. The 9-year-old is pretty much in charge. We like to go to Mount Charleston and walk around or if it’s a cold day, we’ll hang out at the movies. I do like to garden and putter around the house. I love a very normal, boring Sunday. Sometimes normal and boring is what you need.

Andrew: I love going to church and sometimes I sing at church, too. The rest of Sunday, my wife and I will chill. We’ll take our baby out for a walk. My brother lives around the corner, so we hang together, watch TV.

Toby: It’s great to be busy, and its very exciting. We’re relishing every minute.

Phil: It was really fun to go on ‘The Today Show’ last week. We had been on ‘Today’ before when they filmed in Vegas. This time we were in New York, in the studio. We were pretty nervous at first, but then we started playing and the nerves disappeared.

Andrew: We’re busy doing this thing we love to do. It’s a great thing.

Has there been a moment that has touched you the most?

Andrew: I was in Vegas the Tuesday night after the Oct. 1 shooting. I honestly wondered if we would do the show, but we did. People were there because they wanted to heal from what happened. We realized how lucky we are to play music that can lift people and make them feel better.

How did the group come together?

Toby: We were all at the same high school. Michael was 12 when we started and the others were 16. We were all in the school choir together. Andrew had this idea to perform together at this end-of-the-year school concert. He had seen ‘Back to the Future,’ where Marty goes to the Enchantment Under the Sea dance. The band performs ‘Earth Angel.’ He arranged for us to do an a cappella version of that song. We started rehearsing it and all these years later we’re still singing together.

Phil: It was fun. That was the original seed. To have a bit of fun.

Was it a culture shock moving to Vegas eight years ago to do this residency?

Toby: The shock was dealing with the heat and then it gets really cold in Vegas in the winter. Australia is more sub-tropical and it gets cool in the winter, but we don’t have the extremes. As a singer in Vegas, you really have to look after your voice and drink water, water, water. The great thing about living here is that my eyes have been opened to a different Vegas. When I have time off, my family likes to go to the national parks like Zion or Yellowstone. We love Mount Charleston. It’s a great escape from the heat. Spring Mountain Ranch is an undiscovered gem.

Phil: We literally moved our entire lives to the other side of the world. I had only visited Vegas a few days in the past before we moved here for the residency. It was a big gamble when it came to our lives, and here we are eight and a half years later. I’ve found that Vegas is much more than this party town or entertainment capital of the world. It’s a great place to live and exciting because Vegas is moving forward quickly. We have a hockey team, a football team and big businesses are moving in. This is a really vibrant city.

Andrew: The weird thing is that Vegas isn’t as big as you think. There’s a very small-town feel outside of the Strip where you can have a normal family life. I think of the Strip as this world-famous street in the middle of a normal city. Then I drive down the Strip and it blows my mind. It’s 15 minutes from my house. In Australia, there is such a romantic notion of what Vegas is with the Rat Pack, Elvis and living to excess. Living in Vegas can also mean a very normal life of going to Whole Foods and the gym. I love the community feel of Vegas.

How can you get a bit of Australia in Las Vegas?

Toby: You can go to an international market and get foods from Australia like our savory meat pies. That’s a very Aussie thing. We do need a place in Vegas like they have in New York that is run by an Australian and serves Aussie burgers.

Phil: There really isn’t any traditional Australian food around Vegas, but the thing is my homeland is very heavily influenced by Asia and Thai food. You can get that in Vegas. Also, the coffee culture in Australia is very strong. In Vegas, the coffee scene is getting much better. It’s worth it to search out the good ones.

What do you miss the most about Australia?

Andrew: I really do miss Sydney Harbor, which is breathtaking. When I go back home now, I’m a tourist and just walk around my beautiful city. There is an amazing park around the Opera House and I just hang out there. I just let myself take it all in and appreciate it.