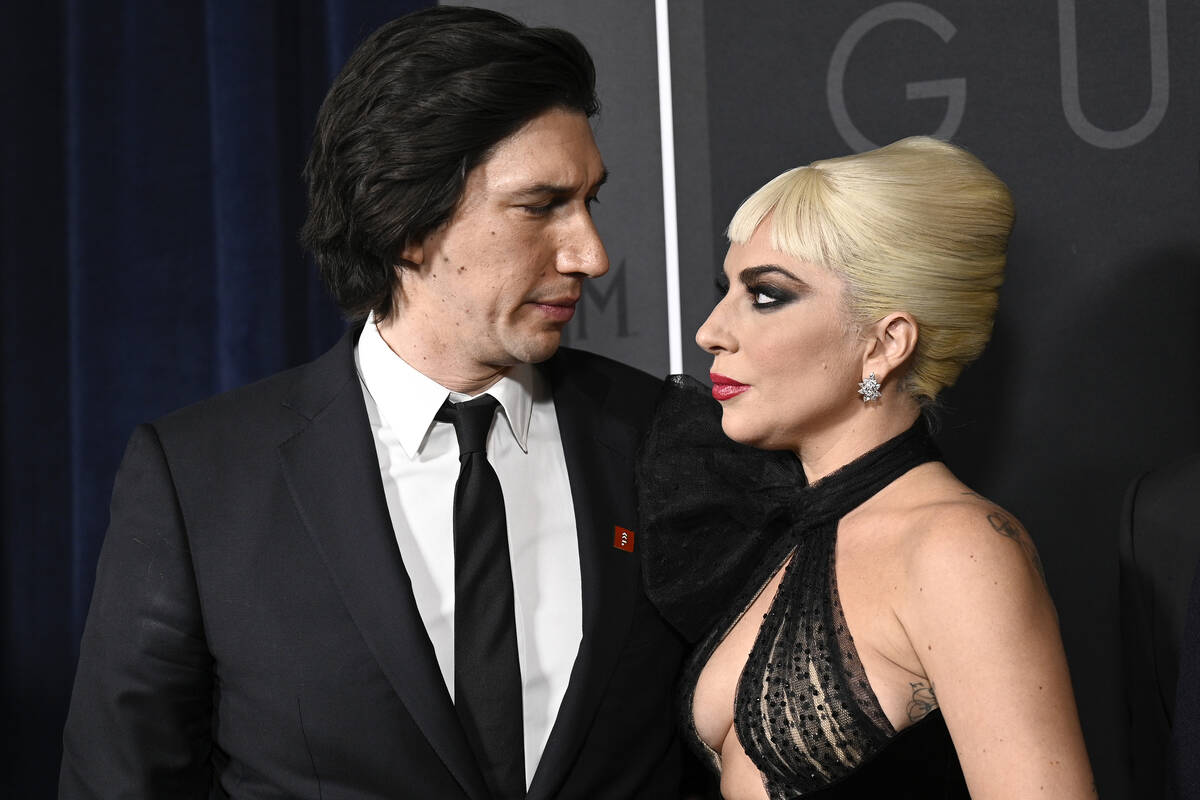 Adam Driver, left, and Lady Gaga attend the premiere of "House of Gucci" at Rose Theater at Jazz at Lincoln Center on Tuesday, Nov. 16, 2021, in New York. (Photo by Evan Agostini/Invision/AP)

Lady Gaga, late afternoon in Los Angeles, was talking about life versus movies. She made it clear that after her shows in Vegas, her life is not lounging in Gucci. “You don’t want to know what I wear,” she teased and then filled in the blank: “It’s party sweats, baby!”

Jokes aside, entering the “House of Gucci” film — Ridley Scott’s latest and a movie that might win her another Oscar — did require blurring the lines between real and reel.

“I drove by where he was shot,” she said of her screen husband, Maurizio Gucci, played by Adam Driver in the film out Wednesday. “I felt the tragedy in the pit of my stomach. For a moment, I thought, ‘What have I done?’ I was so close to her that it was ‘I’ instead of ‘you.’ ”

Gaga just sighed. Out of her sweats today in a form-fitting black Gucci (what else?) suit dress and matching black Gucci sunglasses, she parted lips drenched in a vixen red lipstick. The platinum blond hair, swept up in a bun, didn’t move when she shook her head and admitted, “Ridley said to me, ‘You’re deeply into this, Gaga. When you’re done there better be an exorcism.”

Or how about another Oscar nomination for Gaga, who splits her time between the world and her Vegas residency.

In “House of Gucci,” directed by Scott, Lady Gaga stars as Patrizia Reggiani, an outsider from humble beginnings, who marries into the legendary Gucci family. Ambition begins to unravel the family, creating a collision course of betrayal, decadence, revenge and murder. In addition to Driver, the film stars Salma Hayek, Jared Leto, Al Pacino and Jeremy Irons.

Review-Journal: Is this the return of Lady Gaga, movie star?

Lady Gaga: The truth is, I haven’t done a lot of movies. I’ve done a lot of shows, but movies are a different thing. Most of all, I really wanted to work with Ridley Scott. He’s remarkable in how he gets these voices to come across on the big screen. He breaks down the script for you and finds the cracks. It’s very freeing for the actors and a fresh way to work. And I was so grateful and honored to work with this cast. I’m a huge admirer of their work. Take Adam Driver. I knew he would be magic. Then there was Jeremy Irons. I was terrified to act in front of him. I wanted so much to impress him. Same with Al Pacino.

Were you seduced in a way by this character of Patrizia Reggiani? Just like someone else, she’s larger than life.

Well, I don’t know if I was seduced by her. I did care about her and very much believed in this vision of her. She got away with a lot and it went on for a long time. The illusion of her ability to matter in this family was finally shattered, which led to tragic consequences.

Did you understand her mindset?

She’s not some sexy killer, but a woman who got pushed to the edge and made a horrible mistake. In the end, the joke was on her, and it also made her a fascinating character. She was so sure, when she married, the Gucci family would take her in. She didn’t marry him for his money. She was of a particular class when she met Maurizio. I think she never quite made it on her own. She wanted to be in the family, but they really turned their backs on her as if she didn’t matter. She just wanted to matter.

Describe life on a Ridley Scott set with all of these A-listers?

I felt so empowered to speak my mind. I felt love from everybody. I felt trust. That was key because this is a woman in a world of men. For me to be able to give life to that voice was very meaningful for me.

Why was it important for you to drive by the place where Maurizio Gucci was shot by a hit man?

Because although this movie is very fun and beautifully made, it is also about the loss of a real life. That needed to be honored.

Let’s talk about the fabulous clothes for a minute. Did you have a favorite costume?

I loved the transformation I went through for this movie. I loved the clothes, the makeup and the hair. My trailer on the set was like a science lab of all things Gucci. As for favorites, the red snowsuit was everything.

And the hair was pretty fantastic.

They cut the wig on my head, and I stood there and directed them how to cut the hair. We worked endlessly on the smallest details. Even the way my eyeliner was shaped was crucial. It’s a becoming of someone.

Did putting on those clothes make you feel like the woman?

Is it true that in Vegas people are yelling some of your Gucci lines to you?

I’ll be in the middle of a serious song in Vegas and someone will yell out, “Father, son and the House of Gucci!”

In the end, was it tough to let this character go?

I was so lost in some of the scenes that I felt as if it was my real truth. It felt like reality, so that was a bit of a struggle. The movie’s set was outside, so it became a blur between a movie set and a real world. It was such an immersive experience. I don’t like to get lost. I can find my way out. It was Ridley Scott who told me, “You must leave this part of you behind you when we wrap. It’s done. It’s over.” In the end, I followed his advice. I learned how to be a healthier actor and leave trauma behind. Adam Driver helped me. So did Jared Leto.

Is it the same on stage?

I really do leave it all on the stage and then walk away. It’s a healthier way to live. With the movie, it is different because here I feel like she died at the end. And when you kill someone like a character who lives in you, you kill a bit of yourself.