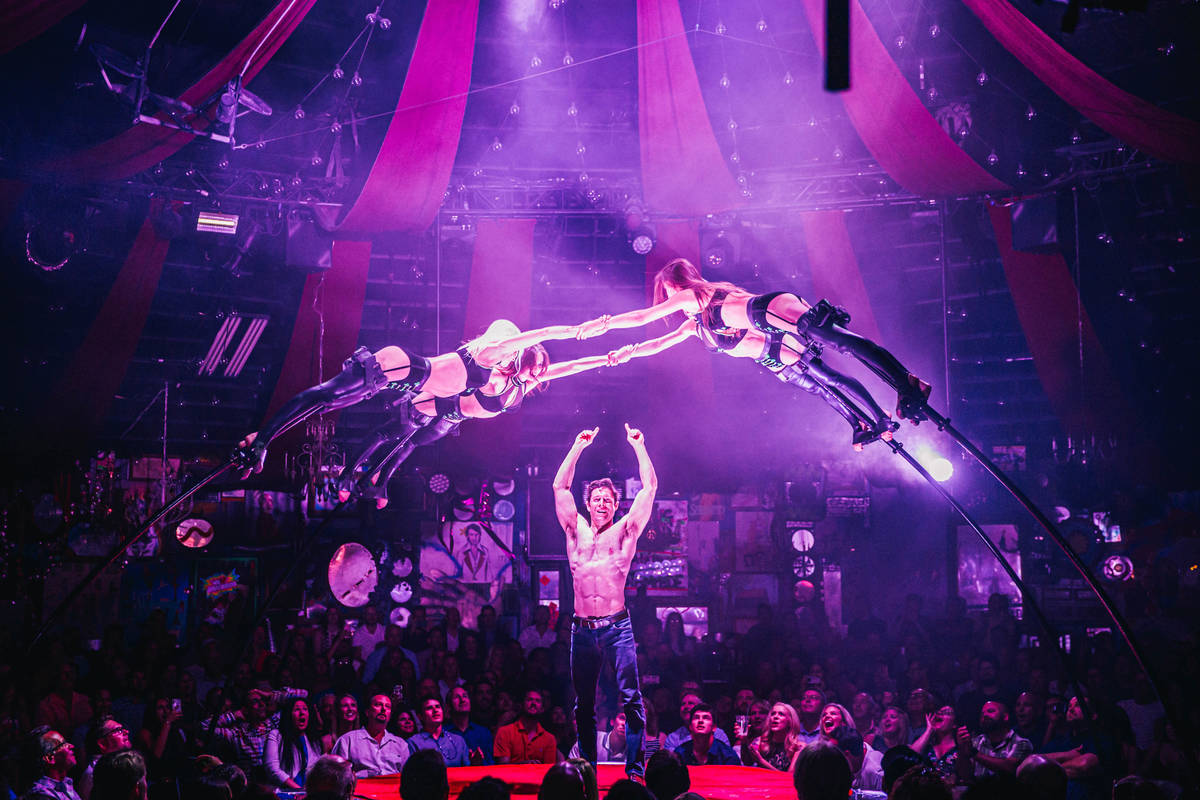 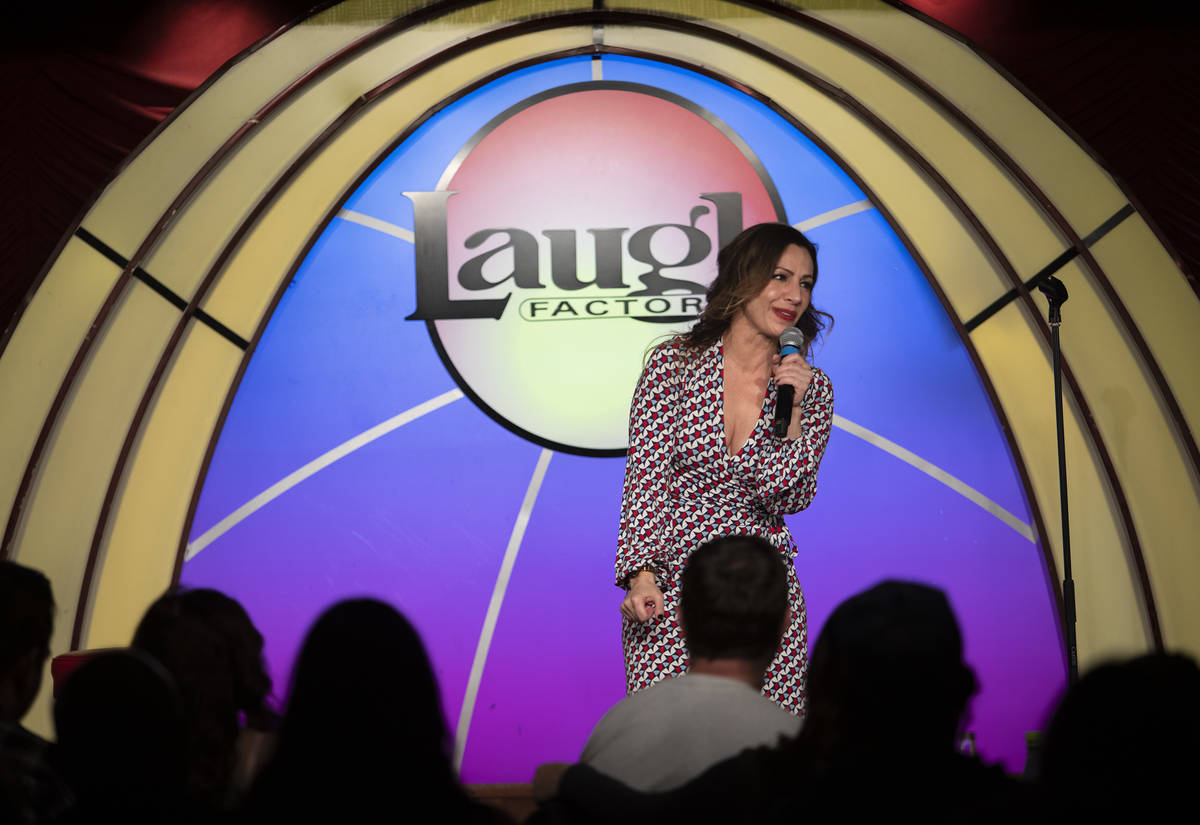 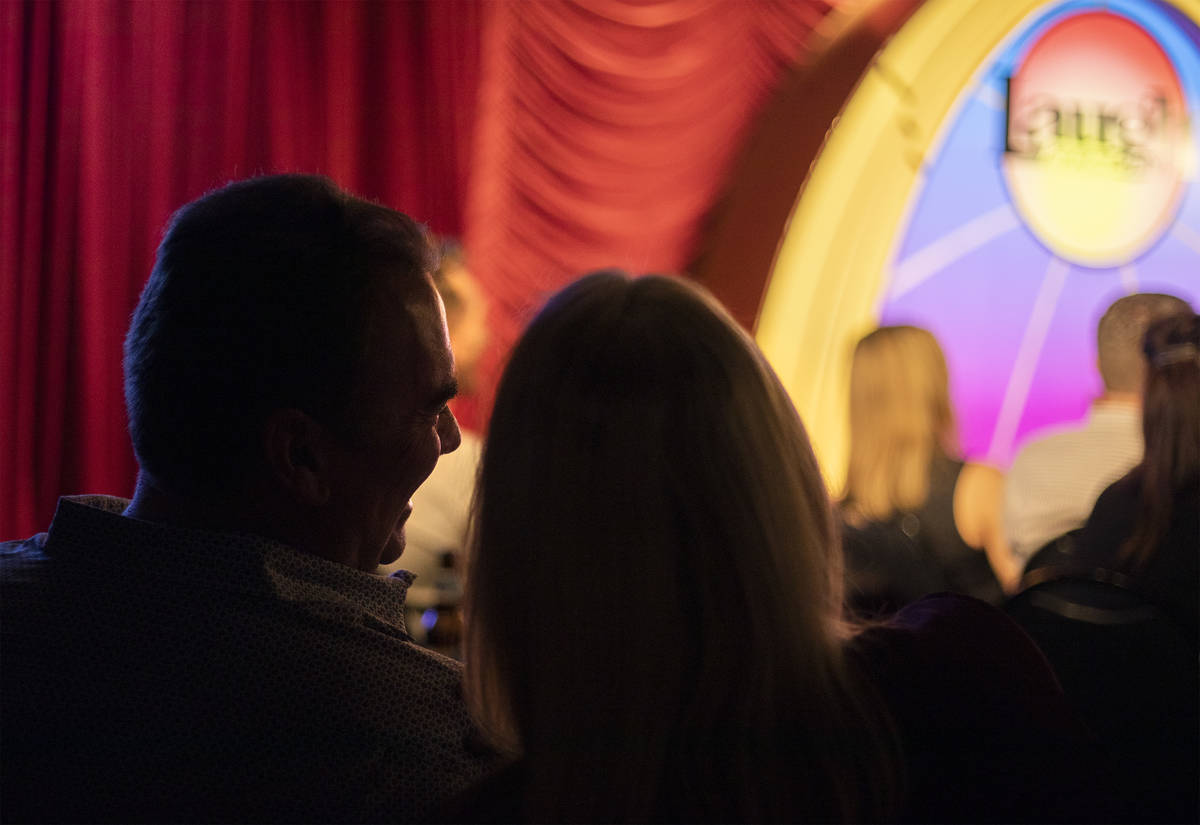 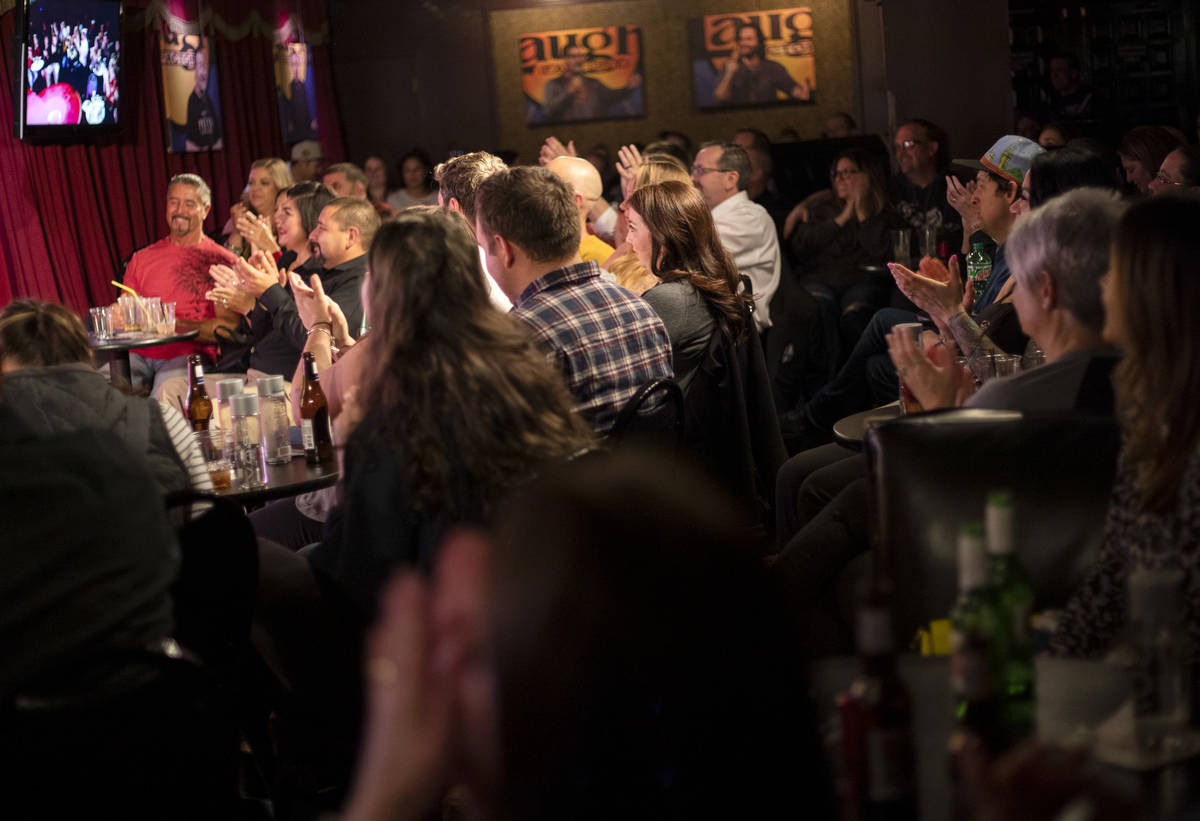 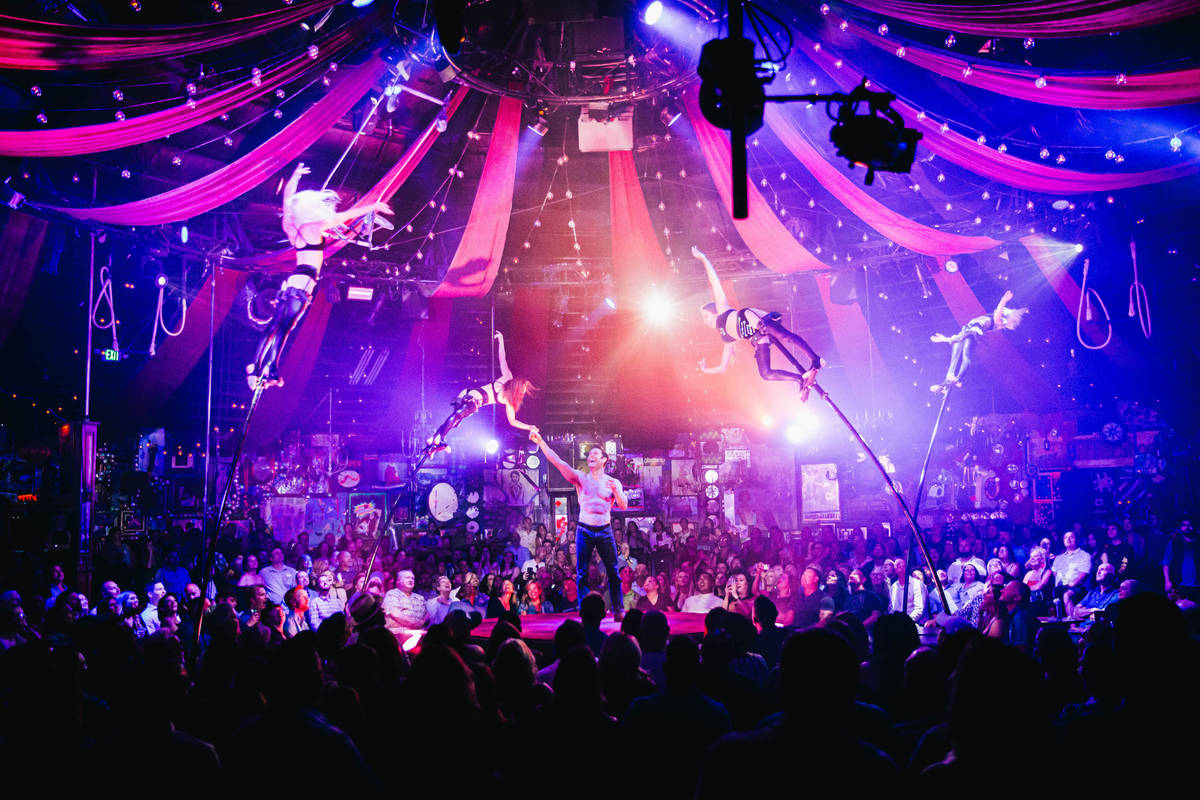 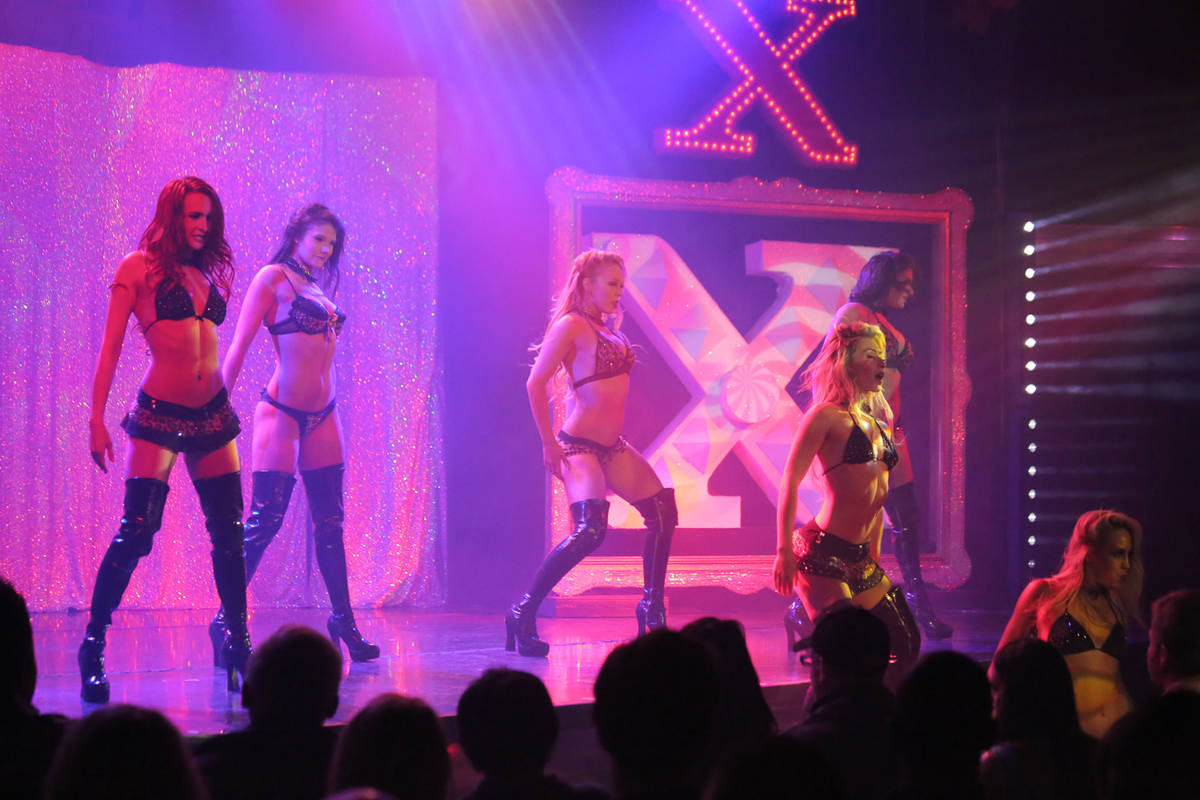 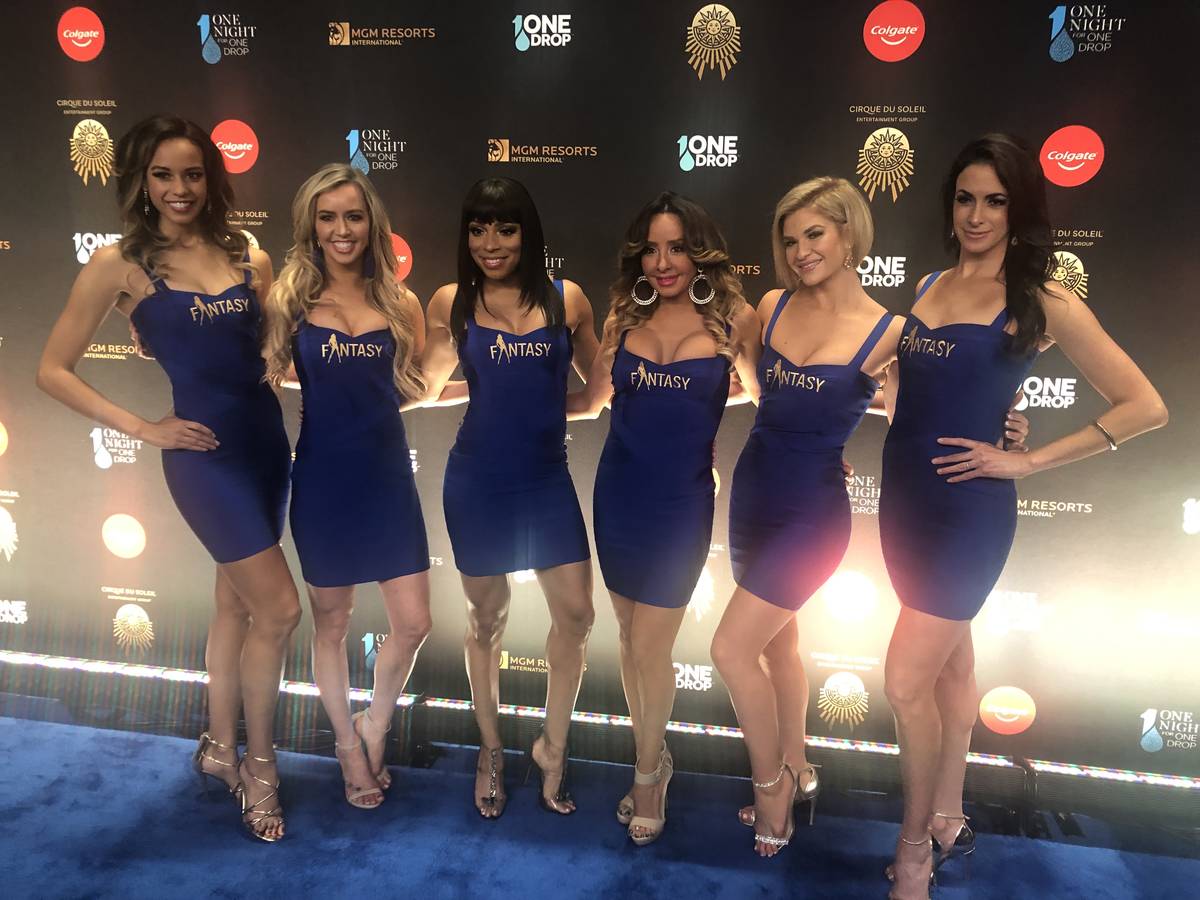 The cast of "Fantasy" at Luxor is shown on the Blue Carpet prior to "One Night For One Drop," held at O Theater at the Bellagio on Friday, March 8, 2019.( John Katsilometes/Las Vegas Review-Journal @JohnnyKats 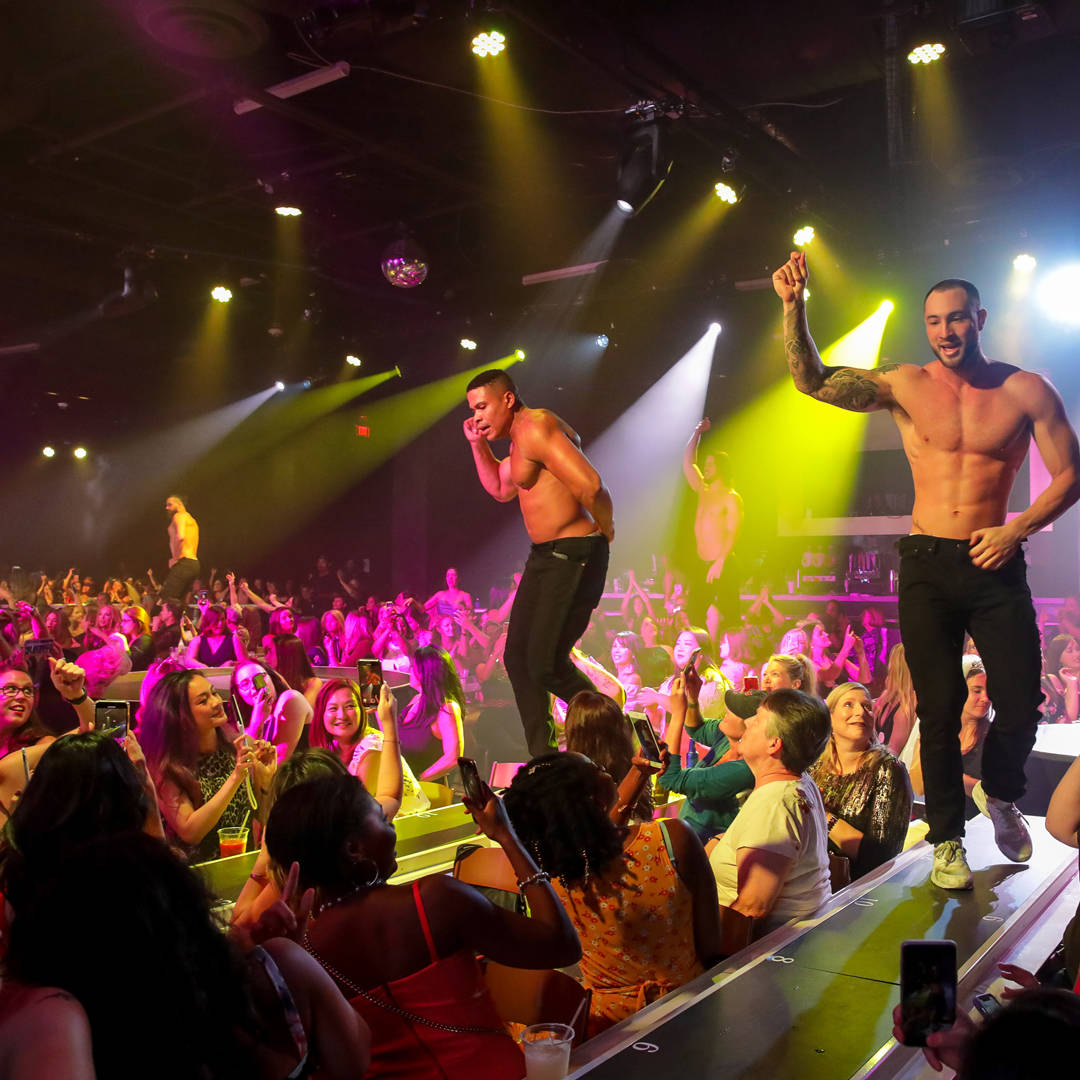 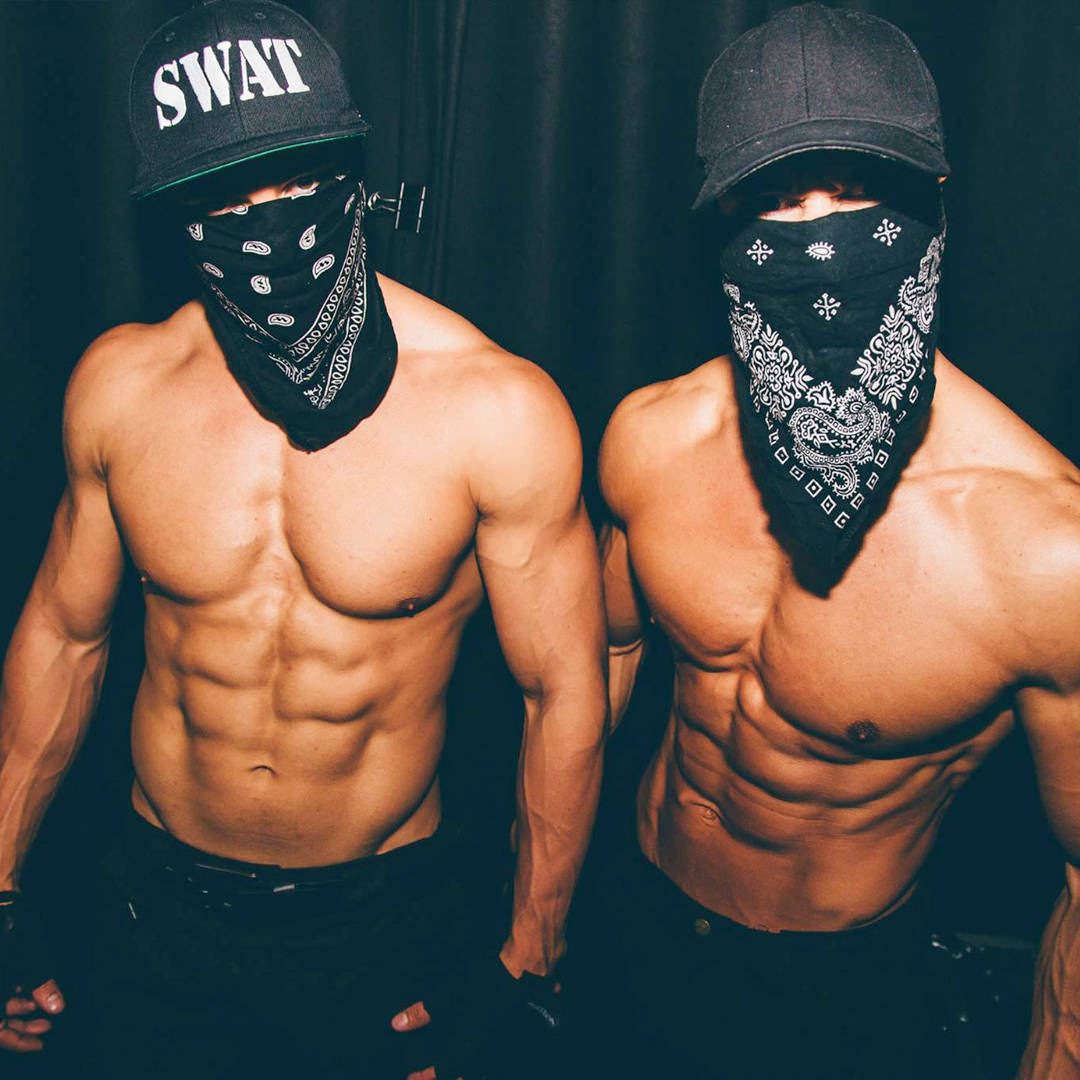 To explain: At least one venue, Laugh Factory at Tropicana, could conceivably reopen for live entertainment as early as next Friday. The second-floor venue is where impressionist legend Rich Little, Magic Murray Sawchuck and the Laugh Factory comedy lineup run in rotation.

The Laugh Factory room is issued a fire-code capacity of 320, drawn down to between 100-150 for pandemic 50-percent capacity limits. The venue could be rearranged to follow Gov. Steve Sisolak’s “Nevada Guidance For Safe Gatherings” document, which states that “clusters” of six audience members to be seated six feet from the closest cluster.

Those directives also mandate a 25-foot distance between the stage and the closest audience member.

Visitors to Laugh Factory can imagine what that means. The distance would effectively cut the room’s seating space in half.

Only then could you start working on setting up the clusters of six people, six feet apart.

“This 25-foot rule is what’s going to kill everybody,” Laugh Factory proprietor Harry Basil says. “Or prevent everybody from opening.”

The same challenges are in place for such smaller venues as the “Absinthe” Spiegeltent at Caesars Palace, the Jabbawockeez theater at MGM Grand, Westgate Cabaret and any comedy club in the city. The 25-foot rule would make it nearly impossible to satisfy an audience (and make a dollar) at such smaller headlining venues, such as Cleopatra’s Barge at Caesars Palace.

None of the major Las Vegas resort companies are moving forward with formal reopening plans for live entertainment. It could take several days to weed through the 23-page “Guidance” document to determine restart strategies.

Adam Steck of SPI Entertainment’s Thunderland Showroom at Excalibur is another such venue on the cusp of reopening. The venue is home to “Thunder From Down Under” and “Australian Bee Gees Show” (but no longer Hans Klok, who Steck says is pulling out his equipment for a showroom with a higher ceiling).

The room seats 500 and would be reduced to about 200 capacity. The crowd would be properly spaced, the venue disinfected and the crowd masked as mandated.

But that 25-foot chasm might be too far to cross.

“It’s a deal-breaker for small rooms,” Steck says.”We need some clarity to forge ahead and do what needs to be done.”

MGM Resorts has penciled in Nov. 4 for a restart of its resident shows. Steck says he could put his shows back onstage in two weeks, if allowed, and if the distance directive were addressed.

Stabile Productions co-founder Matt Stabile is among many producers attempting to piece the puzzle for reopening “X Burlesque” and Piff The Magic Dragon at the Flamingo and “X Country” at Harrah’s. He says the seating restrictions would not prevent his company’s shows from moving forward.

“We won’t know our exact plan until next week,” Stabile says. “But I can tell you we are opening shows, either way.”

“Marriage” has no real stage as it is an interactive show, so the 25-foot rule doesn’t even account for that show. The other Ivory Star productions are small-scale shows where every inch, and every ticketholder, counts.

“The 25-foot directive is very challenging and seems a bit counter-intuitive, especially considering you aren’t 25 feet from anyone else, like the dealer, on the casino floor, in a restaurant or bar,” Bentham says. “That rule, in many of the smaller venues, especially the House of Tape, would take out about a quarter of the house.”

Cools, who has headlined for 18 years at three Strip hotels, said he won’t open the theater for his own show until he can operate at full capacity. He says, “Until then, I’ll remain in semi-retirement.”

As is the case with most protocols during COVID, there is more to learn and the discussion will evolve. The entire collection of protocols is being reviewed by Spiegelworld founder Ross Mollison, who produces “Absinthe,” “Atomic Saloon Show” at The Venetian’s Grand Canal Shoppes and “Opium” at the Cosmopolitan of Las Vegas.

“The answer is to seek clarification, because it seems if you are under 250 patrons, guests and employees, you don’t need to be 25 feet from the first audience member,” Mollison says. “We need to clarify that. If you are sitting in the round, like we do at ‘Absinthe,’ you would be 50 feet away from the next patron across the venue. I don’t think that’s the intention.”

“Absinthe” has been ready to roll for weeks. Mollison has made every preparation in the Spiegeltent to run at 250 capacity, with masks, with spacing (cocktail tables in place of rows of seats) and a disinfected venue.

“We’ll be ready once we resolve a few issues, and this is the case with every business and venue effected by the pandemic,” Mollison says. “We’ll be safe when it’s ready. We are playing a long game here, and it is still early.”