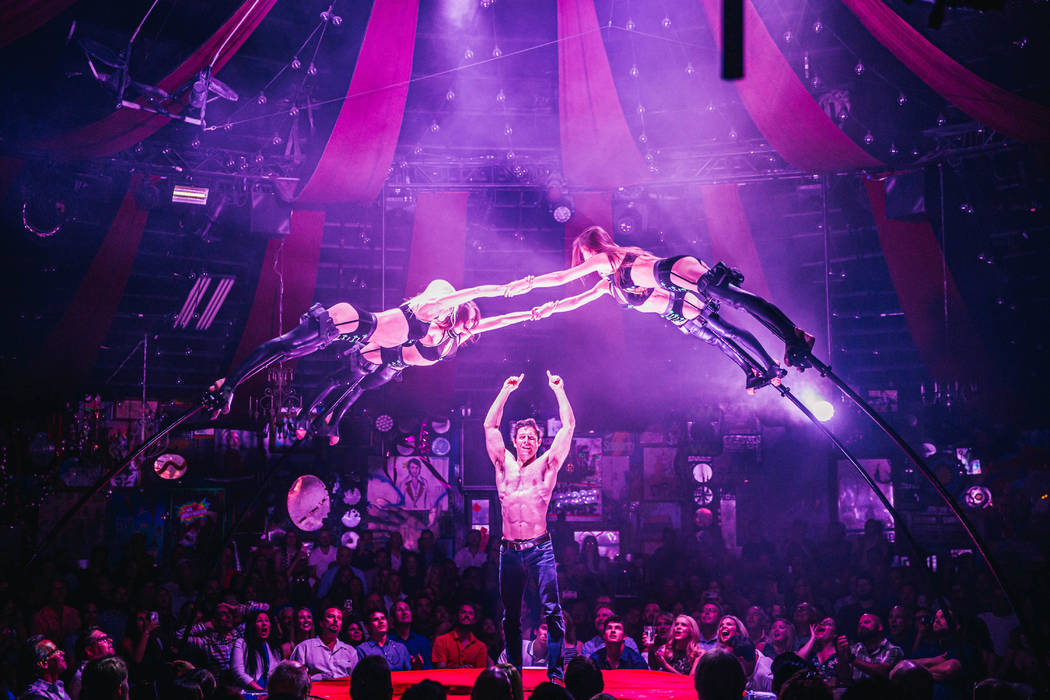 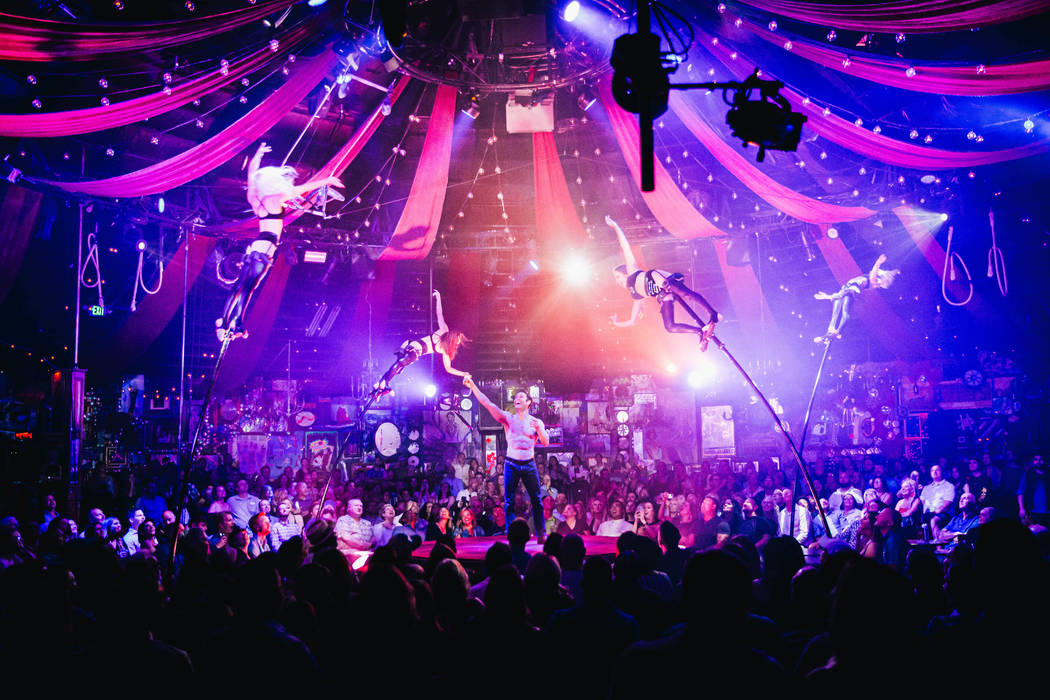 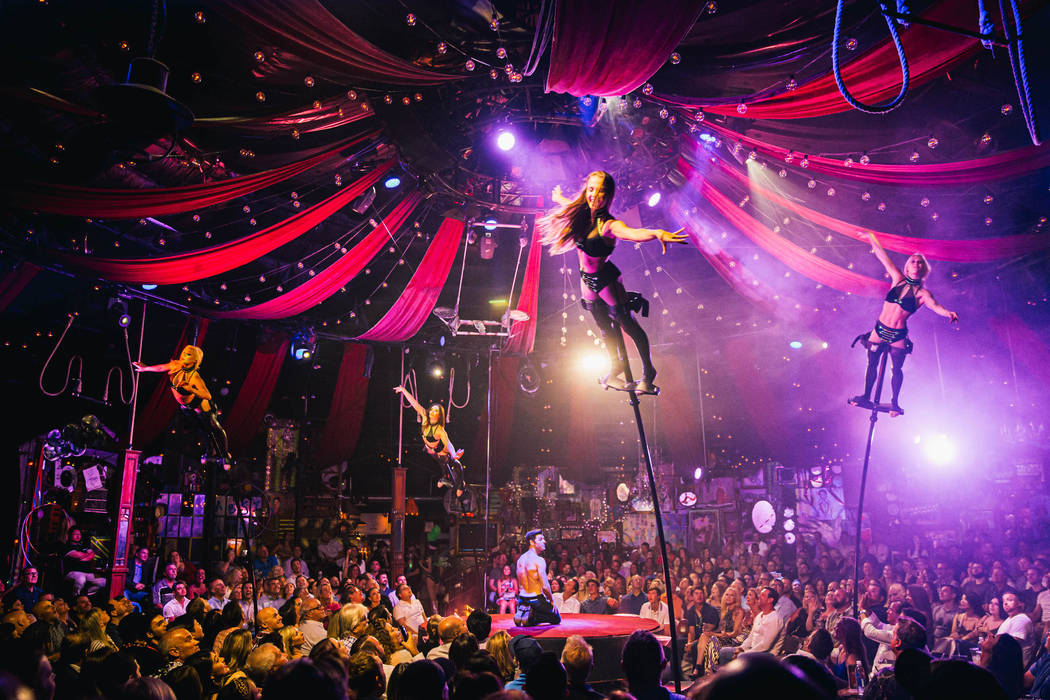 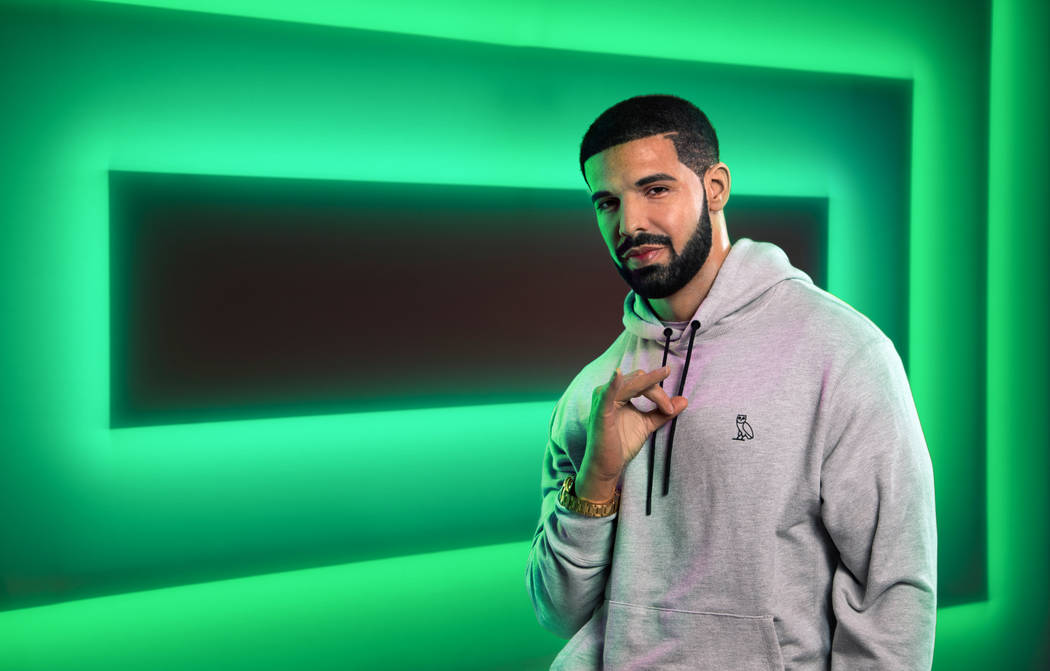 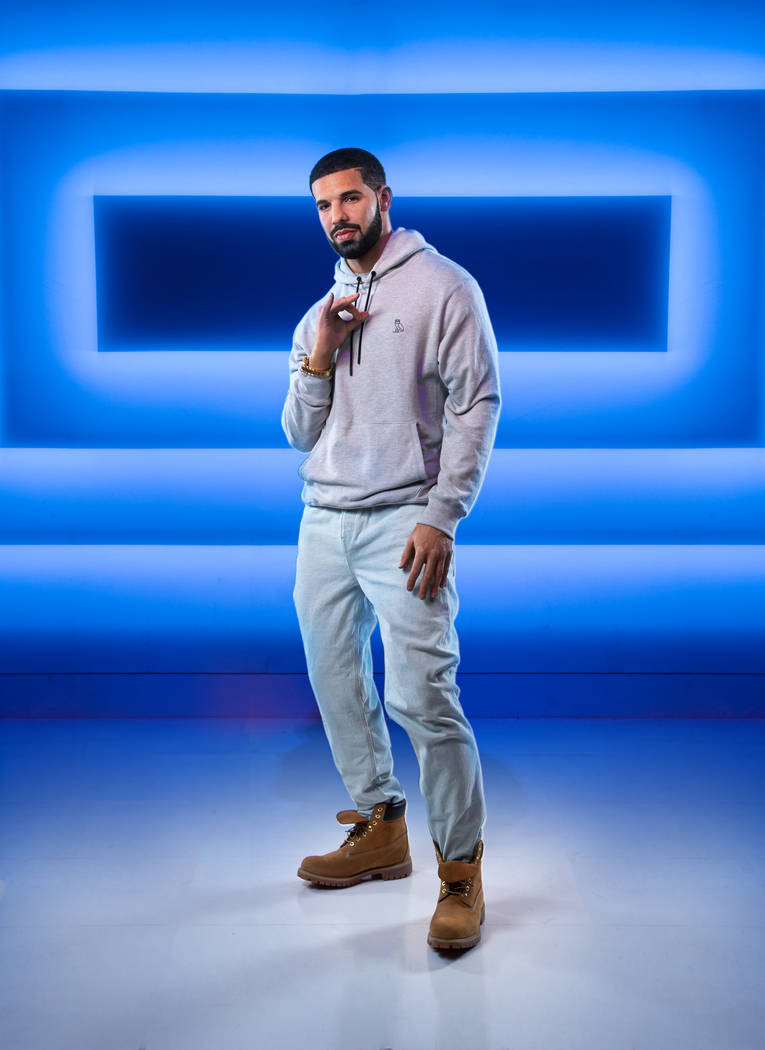 This is the most inspired use of a flexible pole since the heyday of Soviet track star Sergey Bubka.

Forgive the random reference to the famed pole vaulter of yesteryear. “Absinthe,” itself loaded with athletic types from Eastern Europe, has added a quartet of sway poles to its hit show at Caesars Palace.

In the new routine, formally debuted Wednesday night, the Green Fairy character arrives to pour from a bottle of vodka on a muscular “audience member” who looks quite like an artist from the show. The Silicon Valley Girls’ quartet takes to four sway poles fastened to the floor around the stage and perform in tandem around the gentleman (who manages to become shirtless) at the middle of the stage.

The segment ends with the S.V. Girls meeting above the stage and locking arms, suspensefully halting the number. It’s mind-blowing, easily a show-closing number should Ross Mollison (who is the show’s actual producer) decide to shuffle the show’s end. The crowd loved it and roared at the close of the act.

“We have many options and a lot of acts,” Mollison, founder of production company Spiegelworld, says. “But it was especially gratifying to see the response from the crowd. We put so much work into it.”

This sort of sway-pole act is more familiar in arenas, and has been used in Madonna’s “Rebel Heart” tour in 2014-15. “Absinthe” tried developing the act around that time, too, but a pole snapped in rehearsal and the idea was tabled. It’s back in rotation now, another upgrade to a show that brushes up against sellouts twice a night, every night, at Caesars Palace.

“It’s so much fun,” Mollison says. “And that’s why people come to Vegas, right? Maybe they’ll see some sway poles!”

Mollison says plans continue to progress for the Disco-dance production show “We Are Here” to open at a yet-to-be finalized Strip venue in 2020. Director Steven Hoggett (“Harry Potter and The Cursed Child” on Broadway) and music producer/songwriter/musician Nile Rodgers of Chic are among the creative partners. Writing will continue through this summer in the U.K. The show’s anticipated move to Caesars Palace is not a certainty, and conditional to Caesars Entertainment’s entertainment strategy across its hotels.

Meantime, “Atomic Saloon Show” (which is different from “Atomic Salon Show,” which is my own under-development production) has announced The Abdominal Outlaw to its cast. This is Davide Zongoli, famous for his advanced ab work and minimalist wardrobe. That “Saloon Show” opens for previews Sept. 8 at the old Act space at the Grand Canal Shoppes at the Venetian.

You can now get up close and personal with Drake without being a member of the Toronto Raptors.

The rap superstar is the latest wax figure at Madame Tussauds at the Venetian. Team Drizzy can find his bearded figure in the attraction’s interactive music room during Tussauds’ usual business hours from 10 a.m. to 9 p.m. daily. The setting is a tribute to the “Hotline Bling” video, where he’s wearing his familiar OVO sweatshirt, Timberlands, jeans and a (replica) Rolex.

How about a Sunday hang? George Grove, who spent 41 years with the Kingston Trio (and who lives in Henderson); Trio bandmate Rick Dougherty; and Jerry Siggins of the Diamonds (who had hits with “Little Darlin” and “The Stroll”) make up the Folk Legacy Trio. That act is onstage 4 p.m. Sunday at the Italian American Club. Authentic Vegas can be captured at $25 (a mere pittance), with an optional buffet dinner with the band in the Sinatra Room at a separate cost of $24. Call (702) 457-3866 for tickets.