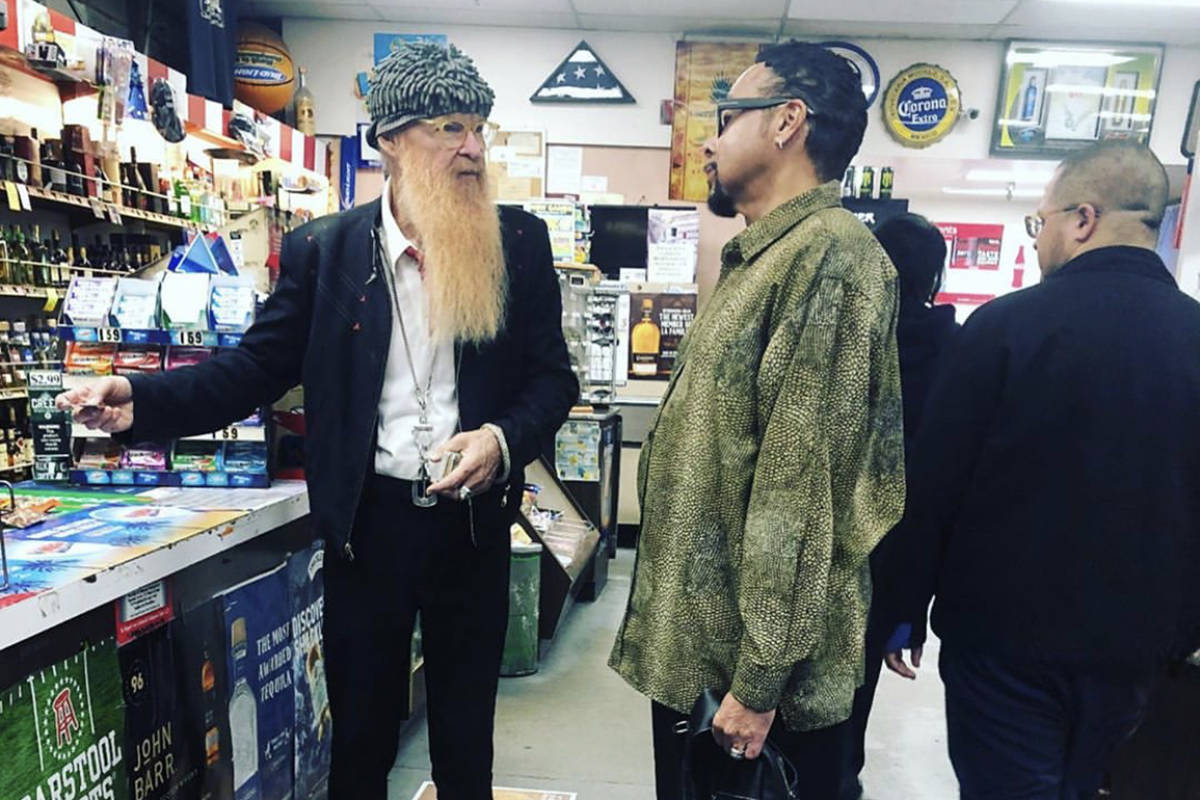 Billy Gibbons and Morris Day are shown at a store in Los Angeles during a break in recording sessions for the new song, "“She Was Too Much Girl For Me,” a collaboration with Snoop Dogg. (@TheMorrisDay Instagram) 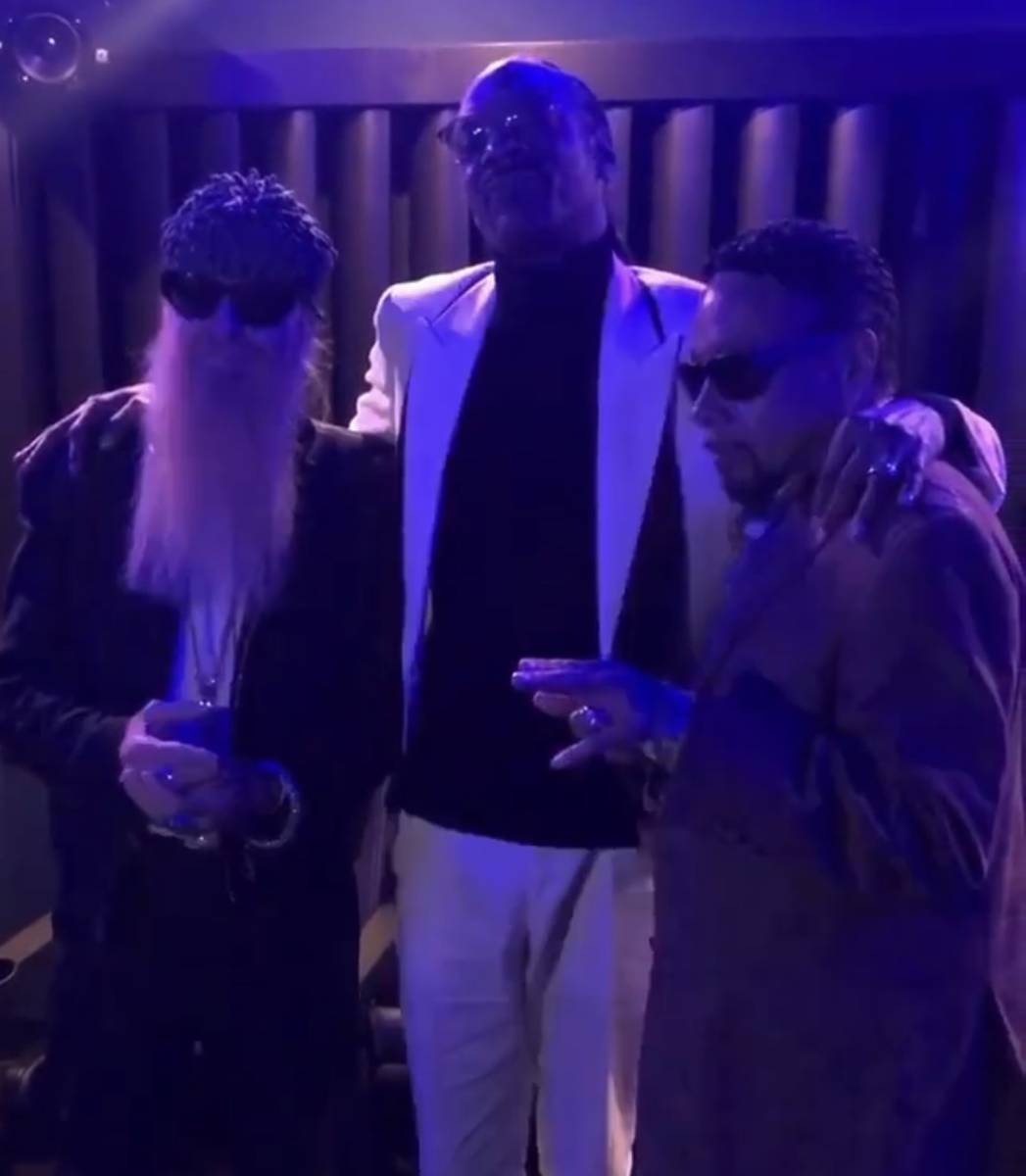 Billy Gibbons, Snoop Dogg and Morris Day are shown in a promotional clip for the new song, "“She Was Too Much Girl For Me.” (@TheMorrisDay Instagram)

Billy F. Gibbons of ZZ Top has fronted the same rock trinity for 50 years. Maybe it’s time to juggle the roster, even for one song.

Gibbons has joined Morris Day (famous as the frontman of The Time) and star rapper Snoop Dogg on a new song, “She Was Too Much Girl For Me.”

The new tune from this tres hombres lineup is currently in a holding pattern until they can return to the studio.

“Being an acquaintance and huge fan of both Morris Day and Snoop Dogg, there’s a lot to like when the two collaborate,” Gibbons says. “Just about everything they do has a spirited energy, inviting the visitor to get ready for an auditory and visual treat. And if ya’ like to get a foot tappin’ and lyrics rappin’, this is the duo that can’t be outdone.”

The back story: Snoop and Day had planned a new song last fall. At about that time, Gibbons happened to run into Will Luke and Courtney Benson of Morris Day Management in January, during the Grammy Awards show after-party at the Polo Lounge at the Beverly Hills Hotel.

Gibbons, a Las Vegas resident, has known both execs for years. He asked how Day was doing, and Benson told him that Snoop had just agreed to rap on Day’s new song. But that song had not been determined.

Benson then asked Gibbons, “Do you have a song?” Gibbons answered, “I always have a song.”

Gibbons then recalled something an acquaintance had said earlier in the day, when asked about his girlfriend. The gentleman said that they had broken up, explaining, “She was too much girl for me.”

“A bell went off,” Gibbons said.

That line would become the song’s refrain. Gibbons contacted his frequent writing partner, Tom Vickers, famous for his work with Rock & Roll Hall of Famers Parliament-Funkadelic, and the song was in motion.

Further work has been suspended until the trio can reunite. But having heard what is done, this song moves. It’s the vibe of the Time’s “Jungle Love” mixed with “She’s Got Legs” and a hint of Snoop’s “Head Doctor.”

The entire collaboration was teased on social media, as this month Day posted a photo of himself and Gibbons at a store near the Los Angeles Airport Marriott. The photo is from those February sessions. Gibbons is handing the cashier his credit card, recalling that he was picking up a six-pack of beer and Day cigars.

Friday, Day posted a video of he, Gibbons and Snoop posing for a promotional clip. Day says, “We’re gonna call it the overhand right. They ain’t seein’ this one comin’.”

Gibbons saw the video for the first time Monday. He smiled at Day’s message and said, “That’s about right.”

The Bronx Wanderers family rock ‘n’ roll act was hit with a collective case of COVID-19 this month. Those affected were father and frontman Vinny Adinolfi; his wife, Carol; son, Vinny “Vin A.” Adinolfi; and his girlfriend, Lizzy Hunt.

Vinny and Carol were more seriously ill than Vin A. and Hunt. But the younger Adinolfi says everyone is fine now.

It sure looks that way — the Adinolfis co-hosted a Facebook Live performance on Monday.

BW is also offering customized livestream performances, to be ordered from a menu on thebronxwanderers.com. The fee starts at $50. You can order up the full band, or just “The Vins,” and select up to five songs from an extended listing. “Modern Love” by David Bowie, a Monkees medley and Frank Sinatra’s “My Way” are on the list. But no “Dizzy Missy Lizzy,” which is an off-the-menu request from the Kats! Bureau.

Hail to the … Righteous

Clint Holmes caught that post. He’s a big Righteous fan. He has since re-written the lyrics to the team’s old theme song, “Hail to the Redskins” as “Hail to the Righteous.”

“Hail to the Righteous!

It sings to me. The Washington Football Team should consider.