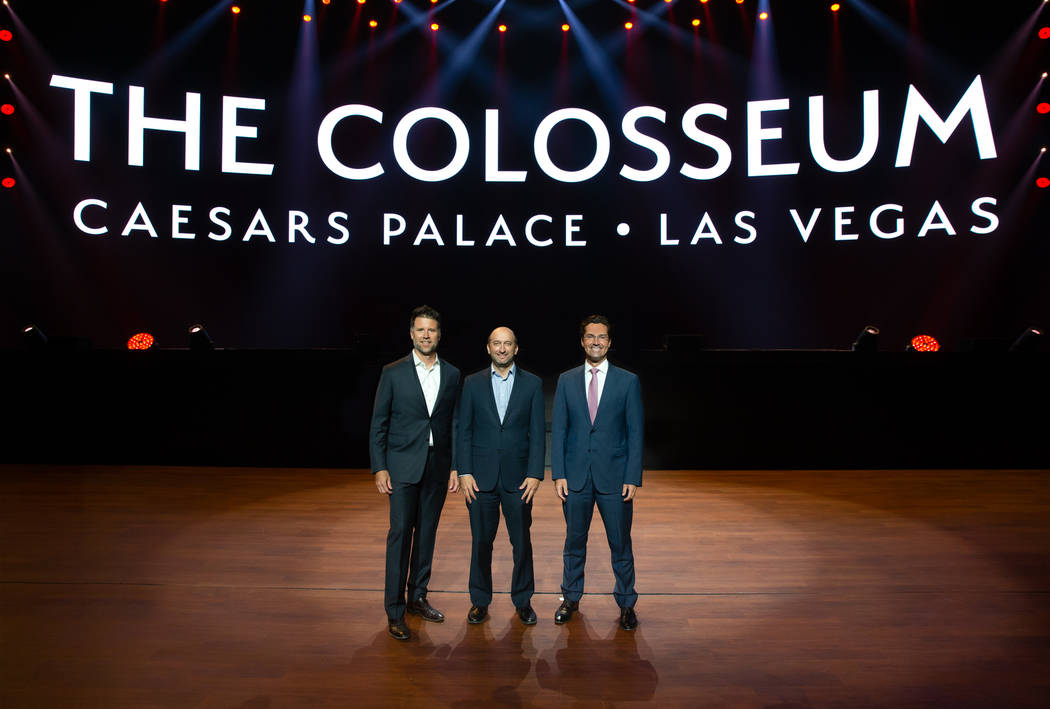 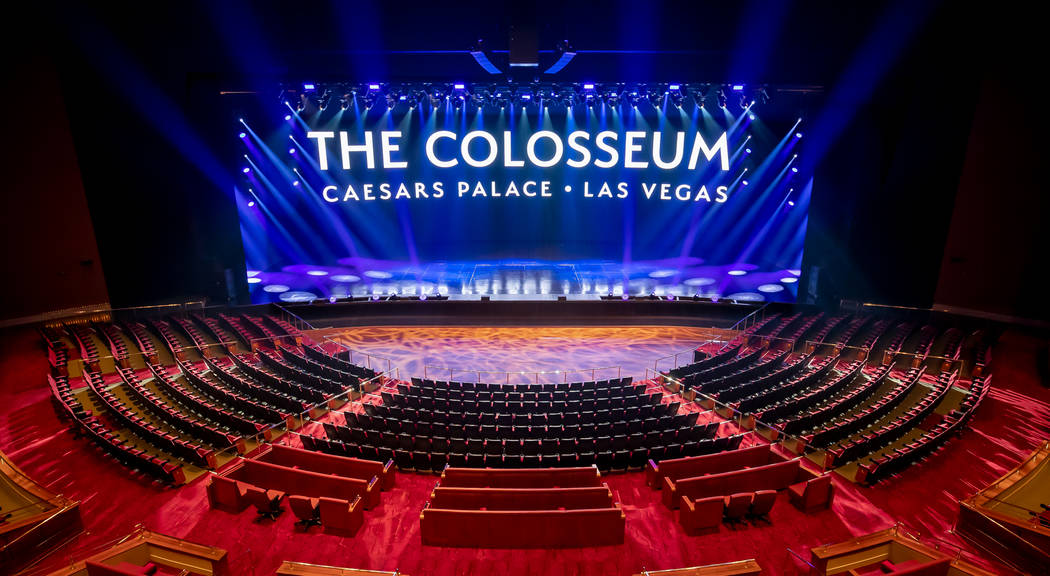 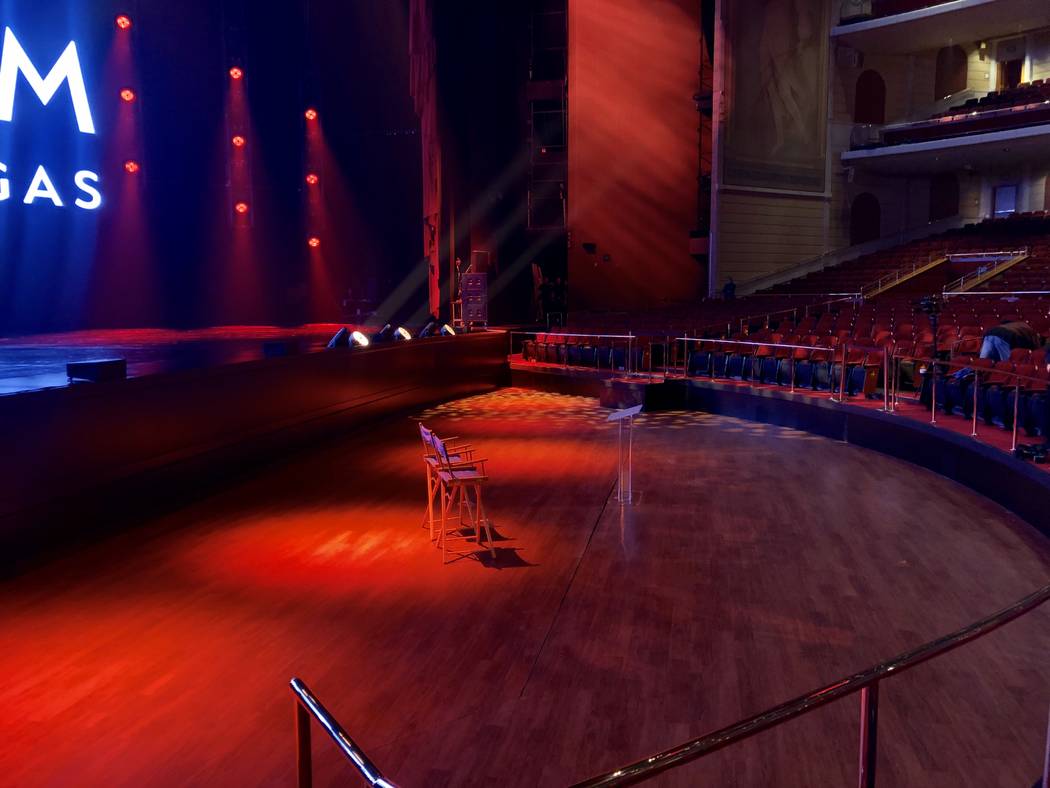 A look at the new general-admission section of the Colosseum at Caesars Palace on Wednesday, Sept. 4, 2019. (John Katsilometes/Las Vegas Review-Journal)

A rendering of the general admission section-- with humans in place -- at the Colosseum at Caesars Palace. (Caesars Entertainment) 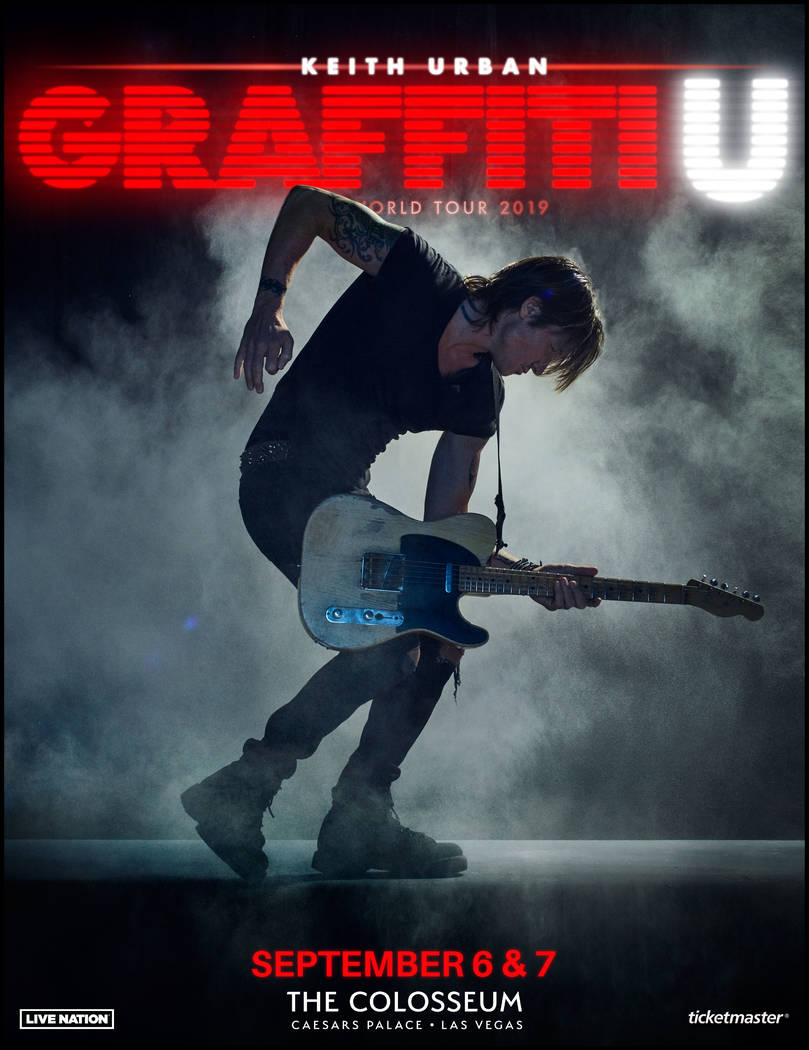 Keith Urban is bringing is "Graffiti U" world tour to the renovated Colosseum at Caesars Palace on Friday and Saturday night. (Live Nation)

The Colosseum at Caesars Palace is making a stand, and so can you.

Versatility, luxury and a standing general-admission area are the new order at the renovated entertainment venue. Keith Urban is kicking off the new era Friday and Saturday night with a stop on his “Graffiti U” world tour.

Those execs are extolling the GA area as a way to expand the venue’s appeal to more high-energy shows. As a reader asked on Twitter, “A mosh pit for Keith Urban?” Yes, if you want that. The open seating is a reason such rock bands as Guns N’ Roses and Journey can play to more festival-style crowds.

“We’re in general admission area that did not exist just seven short weeks ago,” Gastwirth said from the middle of that GA area.“We can now appeal to an even wider set of high-profile artists than we have now.”

A trick hydraulic-lift system will lift the space to its original position for a seated show. This will be of little notice to fans entering the Colosseum for a specific show — the lift won’t be activated during, say, a performance by Madonna. But it is the primary reason the room is as adaptable as Zappos Theater at Planet Hollywood, or its rival on the Strip, Park Theater at Park MGM.

New sound, lighting and an upgraded LED screen are the new production elements. A series of expanded VIP booths with banquettes and bottle service are in the back of the lower orchestra section, fitting the room’s original, regal design vibe.

The revamped venue also marks the beginning of the promotional partnership between Caesars Entertainment and Live Nation, which has already worked with Caesars over the past seven years at Axis/Zappos Theater. Britney Spears, Jennifer Lopez, Backstreet Boys, Gwen Stefani and Christina Aguilera all were booked by Live Nation — which continues as a busy promoter at Park Theater.

But the Colosseum, which is where the modern-day Vegas residency was hatched with Celine Dion, has used her departure as a time to revamp. It was needed because in Las Vegas to stay still is to move backward.

Urban’s show is the beginning of a new era the Colosseum, a pretty place but not too stodgy to party.

NFL legend, ace broadcaster and master showman Terry Bradshaw is returning to the Luxor’s Atrium Theater on Oct. 1, 22 and 29. Bradshaw had but two plays in his game plan for his August shows: for everyone to have a good time, and to do well enough to be invited back. Move the chains!

On Wednesday morning I asked Smokey Robinson which contemporary artists he finds inspiring.

“I have to start with Bruno Mars, or as I call him, Brown Jackson.” That’s a reference to James Brown and Michael Jackson, two of Mars’ clear inspirations. Mars is currently at Park MGM, and Robinson headlines Encore Theater on Sept. 18, 20 and 21.

Donny and Marie Osmond are featured in a segment on “CBS Sunday” this weekend. Donny says it is among the very few occasions for which he and his wife, Debbie, have allowed a TV crew into their home.

Veteran Vegas impressionist Gordie Brown’s final show at Hooters/OYO Hotel & Casino is Sept. 29. Brown has spent a year and a half at Night Owl Showroom, after a six-year stint at Golden Nugget, but his future beyond October is uncertain.

Brown has been in talks with Ken Henderson at the under-development Notoriety entertainment fortress at Neonopolis. But nothing has been determined for Brown after he leaves what is Hooters today, and what will be OYO by the time he bows out.

There is no opening date yet set at the multi-venue Notoriety, but it won’t be until after Henderson achieves the proper business licensing, which would be after he appears before the City Council on Oct. 22. Henderson is also contemplating a move of his Best Agency headquarters to the Neonopolis complex, on the bustling (and busking) entrance to Fremont Street at Las Vegas Boulevard. Such a move would be a significant moment for the ongoing development of the retail/entertainment center.

Sad to report that longtime Las Vegas entertainment journalist Don Usherson died over Labor Day weekend. The Clark County coroner’s office confirmed Tuesday that Usherson was found dead at his home in Las Vegas on Saturday afternoon. He was 72.

Usherson was known to be in failing health, and had posted messages on his Facebook page contemplating the afterlife.

During his days in Las Vegas, Usherson was a columnist at Gaming Today for several years. Prior to that stint, he worked as a publicist at the old MGM Grand (now Bally’s), and was on staff during the famous fire at the hotel in November 1980. Plans for a memorial service are pending.

Imagine Dragons re-posted the video on Twitter for their hit “Radioactive,” which was recorded in New York as Hurricane Sandy descended on the city in 2012. That video has blown up on YouTube, amazing with 1 billion viewers.

On Friday night, the Dragons are hosting their annual Rise Up Gala charity gala for their Tyler Robinson Foundation childhood-cancer organization. The guys are live-streaming their usual acoustic set, a highlight over the past five TRF galas. And keep your eyes and ears open for a special moment involving the band and a very influential Las Vegan.