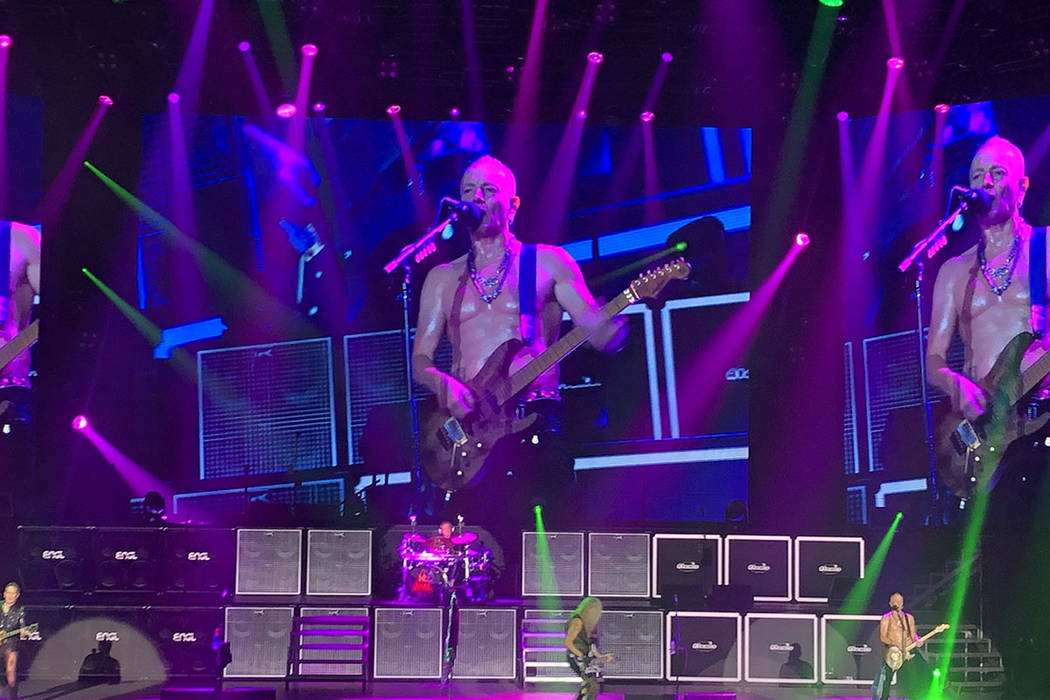 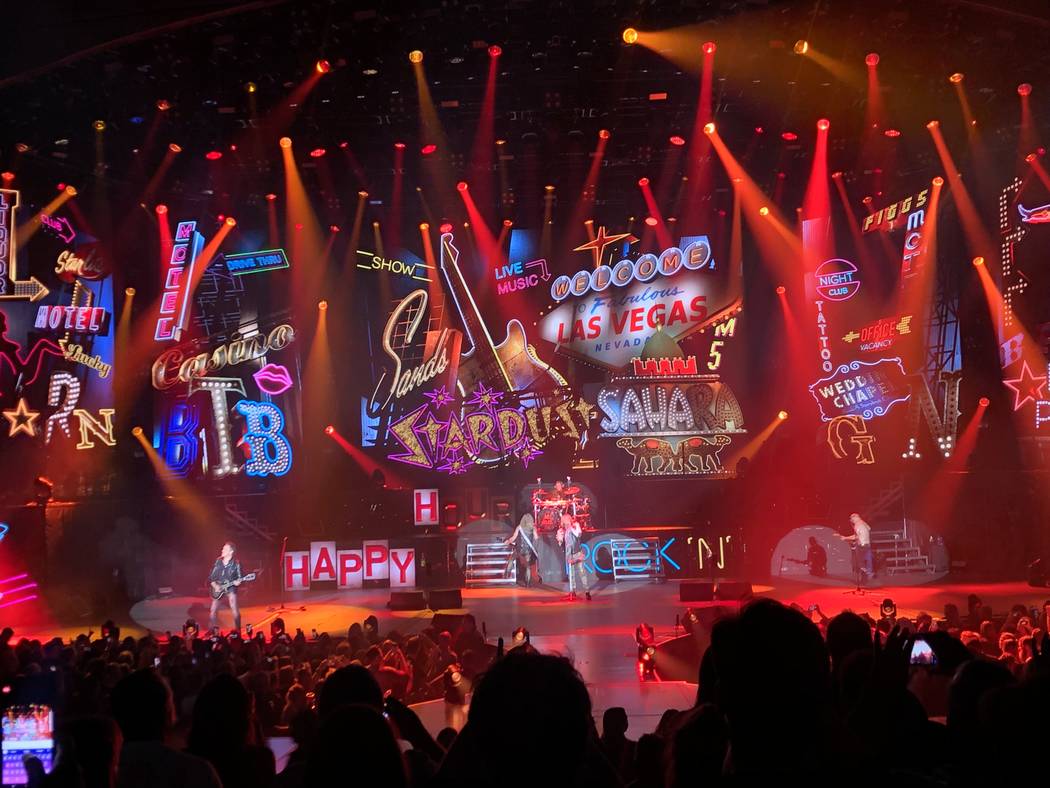 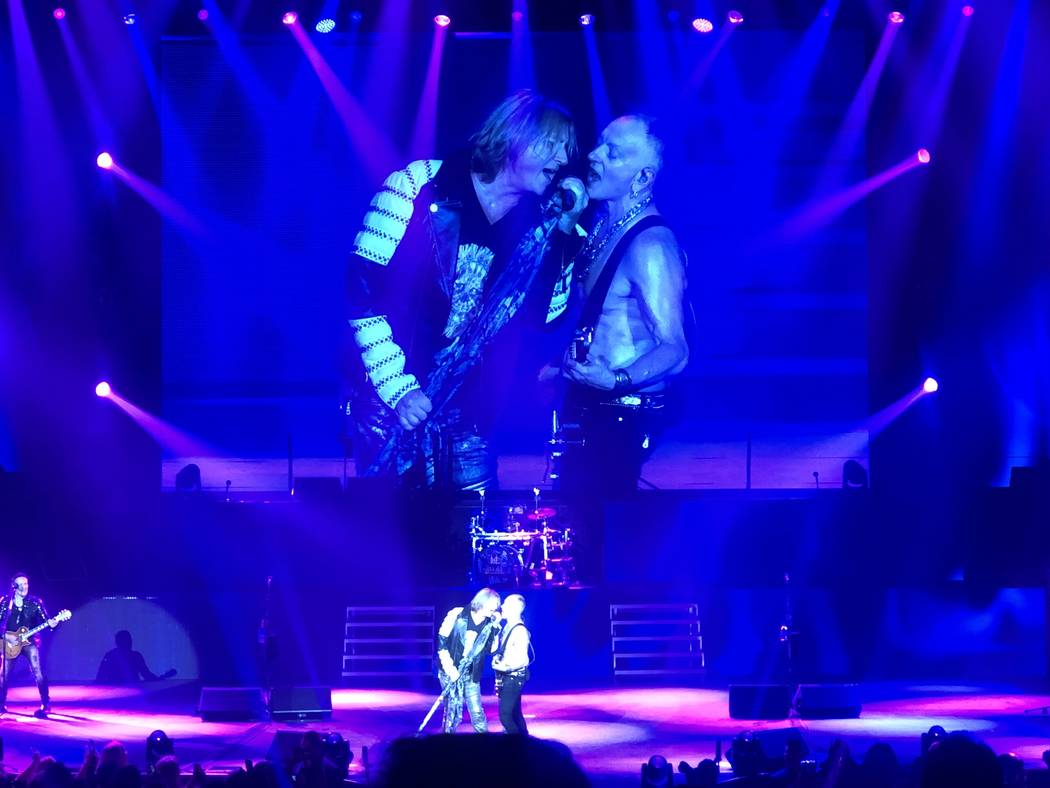 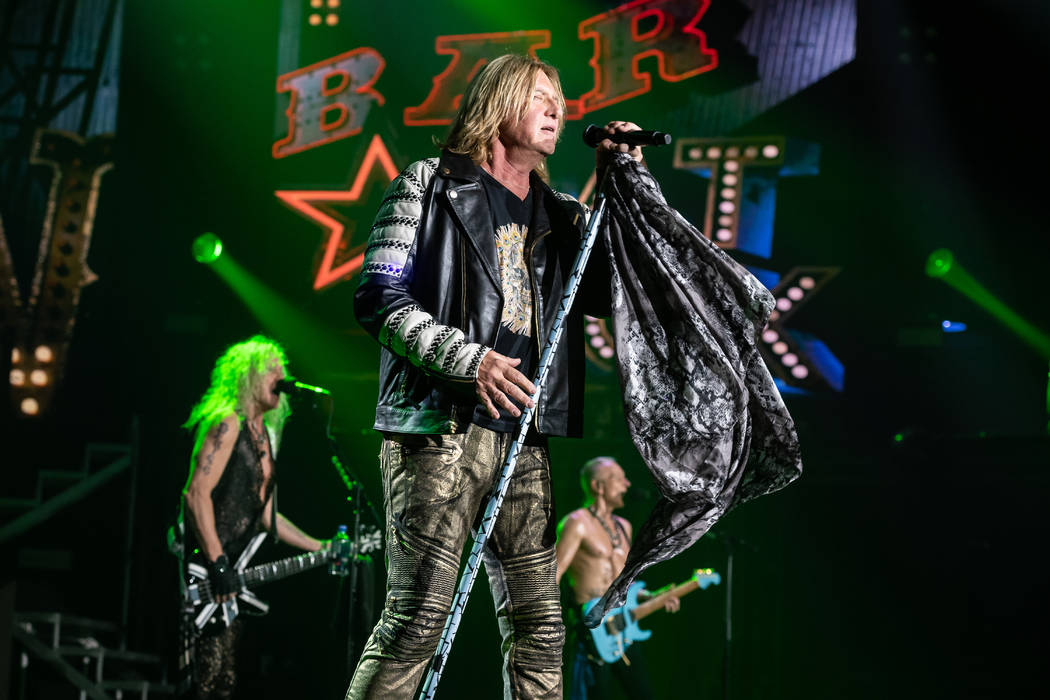 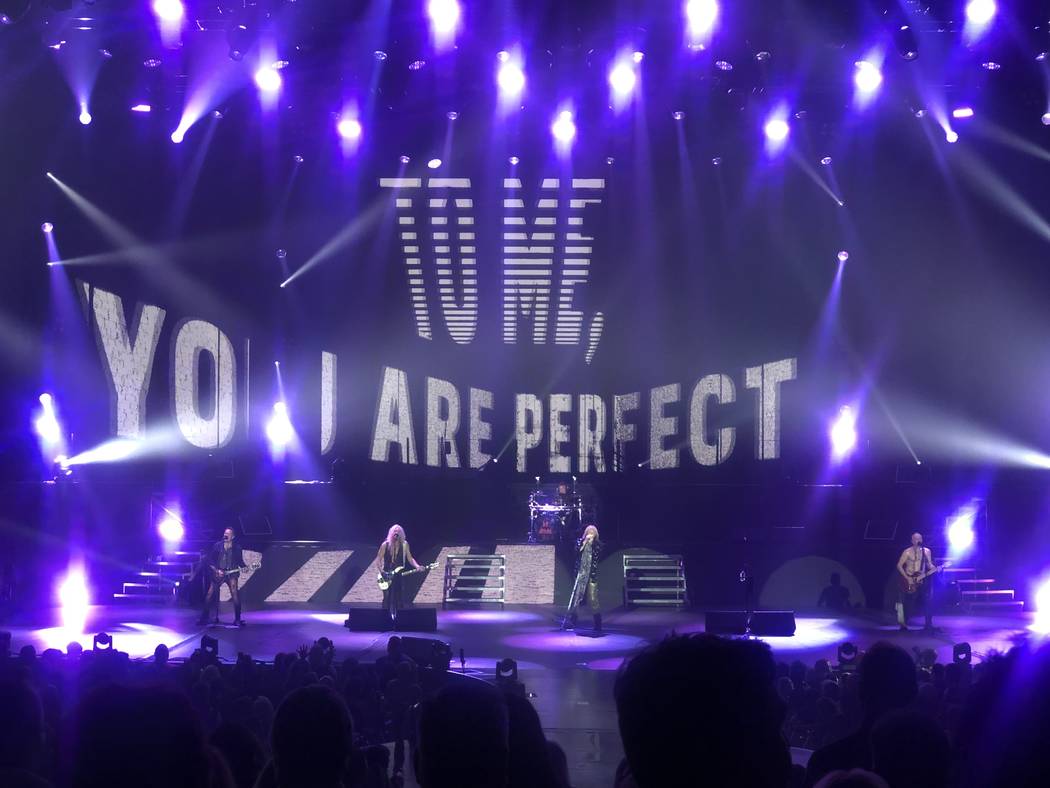 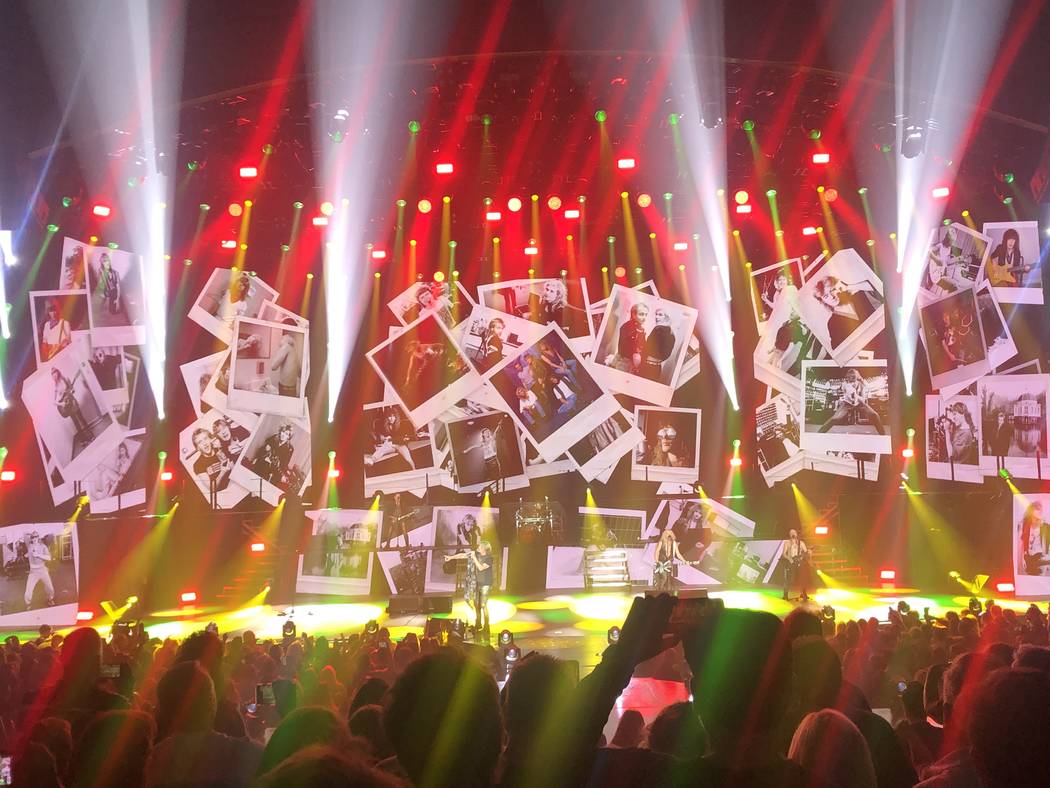 There is so much to look at in Def Leppard’s “Sin City Residency.” The LED screen blossoms with old-Vegas neon signs, the Sands, Sahara and Stardust among them.

The band performs in a dazzling stage and blazing strobes. Gears turn on the big screen, which rolls the lyrics of many of their classic hits.

But I watch the guitarist Phil Collen. He stalks the stage like he owns it. He is shirtless, with hair shaved to the ⅛-inch mark. Collen wears a long scarves knotted to the belt loop on his rocker trousers, and wearing what seems to be 18 pounds of silver chains. He plays a series of guitars, including a gleaming-blue Jackson USA Limited Edition PC1 Shred Phil Collen Signature that retails for $4,500. Yes, I researched that instrument.

Collen is 61 going on 21, rocking out with Def Leppard on the Las Vegas Strip. You watch him perform and can’t help but think, “This is living.”

The band opened its 12-show run Wednesday night to an audience of middle-age types, likely in Collen’s demo. This crowd had to have purchased the 1981 classic “High & Dry” on vinyl, and knew all the words by heart.

Realizing this, the band was comfortable in its own skin, or leather jackets in front man Joe Elliott’s case. The thousands of concerts performed, including a previous residency at the Joint at the Hard Rock Hotel seven years ago, was evident.

Elliott joked easily in talking to the crowd, saying mid-show, “What is it about Las Vegas that makes you want to talk like Elvis?” Remarkably, Def Leppard was ready to rock at the scheduled 8 p.m. starting time, on the button, for its opening show. (The adherence to scheduling reminded of Marty DiBergi character line from “This is Spinal Tap,” where Rob Reiner’s character says, “I remember being knocked out by their, their exuberance, their raw power — and their punctuality.”).

Def Leppard is a coveted Las Vegas residency band for good reason. The band has clearly performed countless shows since forming its first gig 41 years ago at A Block in Westfield School in Mosborough, Sheffield, in England. Their videos show them performing for tens of thousands of fans in stadiums during their “Pyromania” and “Hysteria” world tours.

The close quarters at Zappos Theater gives the band an opportunity to utilize fully utilize video screens and laser effects. But as Elliott also said from the stage, after clearing his throat into the mic, “This is all live. No tapes here.” This is a tight-knit musical unit, and among the most effective live acts of its era, powering through “Pyromania,” “Animal,” “Foolin,” “Armageddon It,” and the dependable sing-along, “Pour Some Sugar On Me.”

The band pumped the brakes for a semi-acoustic set at the middle of the theater playing “Let Me Be the One” (off the 2002 album “X,”) and “We Belong” (off the 2015 album of that title). The band was especially tight in this segment; it could have fit on the stage at Planet Hollywood’s Extra Lounge.

Def Leppard is a band where you can ask a fellow fan what song closes the show. Some would guess, “Sugar,” or “Rock of Ages,” or “Hysteria.” No, it was “Photograph,” with the LED screen splashed with Polaroid pics — some of us remember them, during the time we listened to Def Leppard on Maxell metal tapes.

The stage became filled with those images of the band’s early days, with Elliott calling out, “All I’ve got is a photograaaaaph!” Not really. There are all those infectious rock classics songs, played by a band that is as great as it thinks it is.