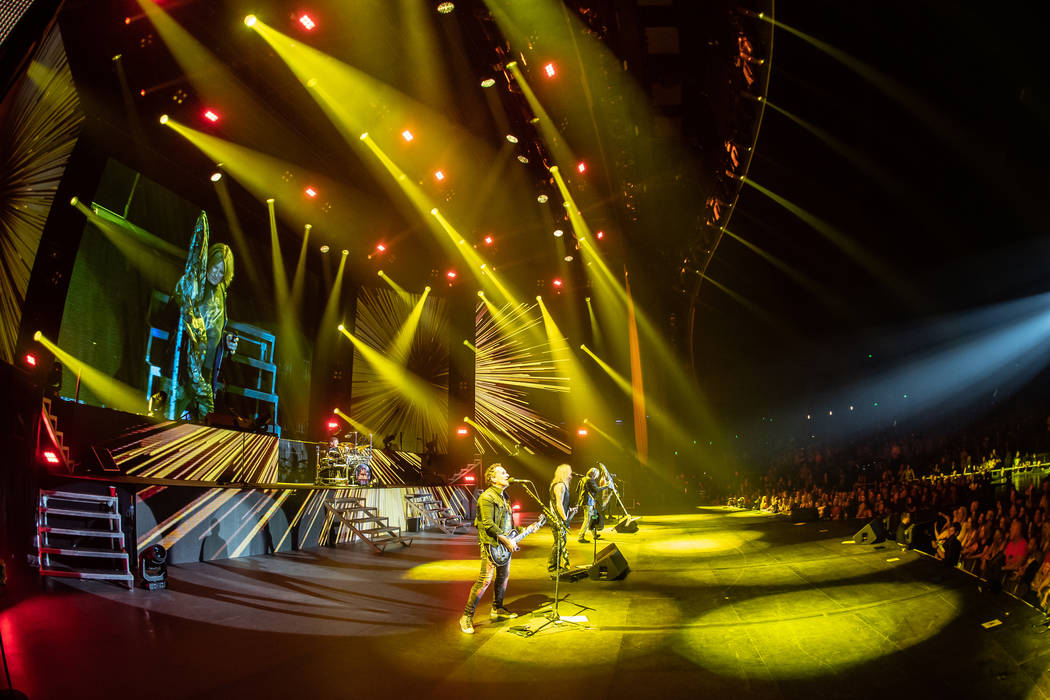 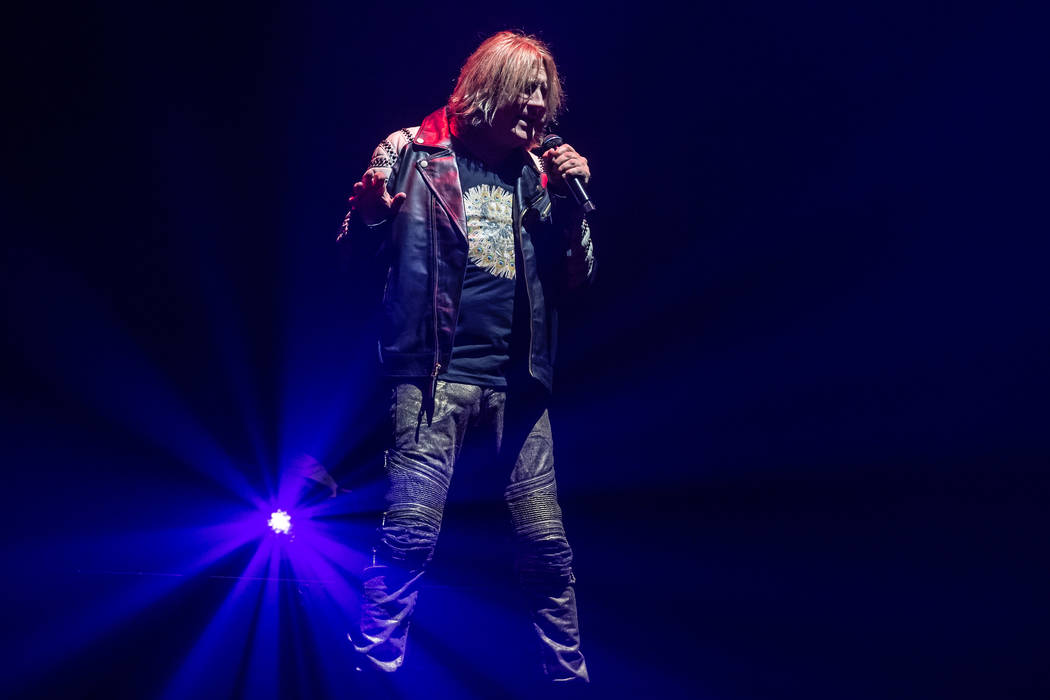 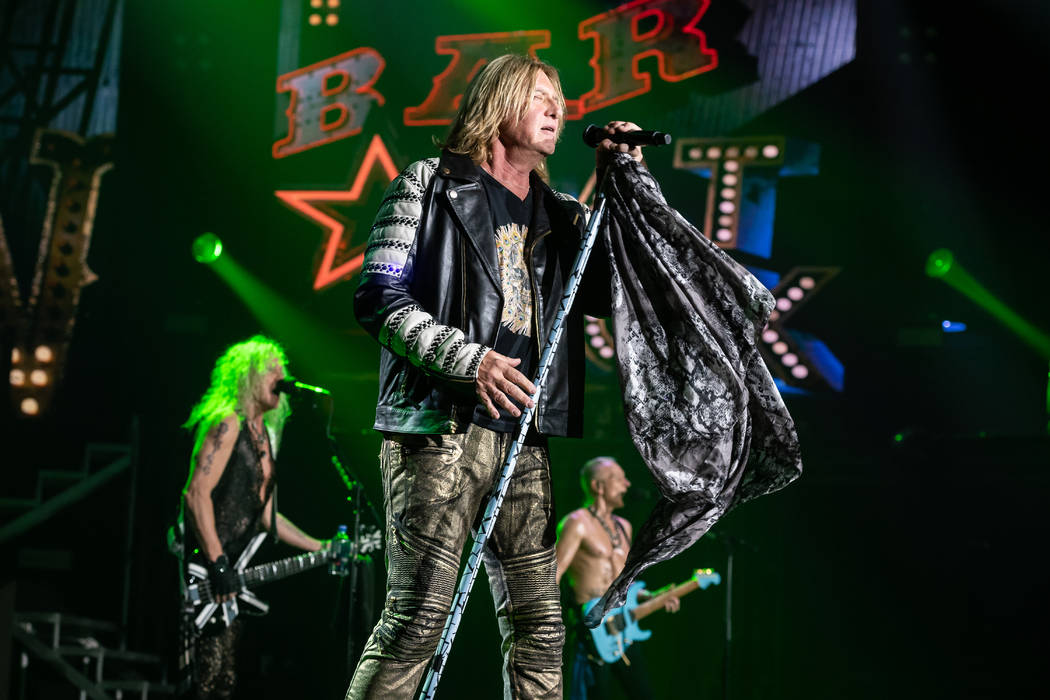 You need more than a list of hits and a stack of amps to pull off a Las Vegas Strip residency.

“We’re really aware that it’s in Vegas, and residencies that we’ve been witness to when we were building the stage, the kind of examples we were being shown was stuff like Gwen Stefani, or Cher, or any of these big ones — Britney (Spears), where they’ve got dancers and ramps and explosions and God knows what else,” Def Leppard front man Joe Elliott says. “You can’t just come into Vegas with a rock rig and think that you can get away with it, you know?”

We know, yes. Def Leppard is performing at Planet Hollywood’s Zappos Theater in its “Sin City Residency,” returning Tuesday night and running for nine more dates through Sept. 7. The band opened Wednesday night, unleashing such hits as “Pyromania,” “Animal,” “Foolin,” “Armageddon It,” “Pour Some Sugar On Me,” “Rock of Ages,” “Hysteria,” and “Photograph.”

The show would have been musically outstanding event as a concert run of those classics. But the band has developed extensive production in the room where Spears, JLo, Pitbull, Backstreet Boys and (currently) Stefani and Christina Aguilera have produced Vegas-scaled spectacles.

Elliott talked of the Vegas run, his inspirations, and his youthful energy in a recent phone chat. The highlights:

Adventure acting: Elliot says he and his band mates get into character before performing the Zappos shows.

“It’s a bit like an actor going into one of these blockbuster summer movies, you know? You’ve got to just buy into the fact that it’s going to be a slightly over-the-top production, and we grew up on those. We grew up on Queen, and Pink Floyd, and even AC/DC when the bit of theater just adds to the excitement … So we were willing participants, and dove in feet first, as it were.”

Same-size pitch: It took the band a few minutes to feel comfortable in its opening-night performance Wednesday night.

“It’s a little bit like playing an away game, the pitch (field) is the same size, but it’s not your dressing room. It’s just a different vibe, and it just takes you, maybe, a couple of songs to get your head around,” He said. “… But we’ve been doing it for 42 years, most of us. If you don’t know what you’re doing by then, maybe you should think of changing your occupation.”

Aerosmith is ‘family’: Elliott said he’d only seen photos the Aerosmith staging for its “Deuces are Wild” residency at Park MGM, but he’s feeling the power of that show. “We’ve kind of got an overlapping family, if you like, with Aerosmith, management-wise, and even some of their crew is some of our crew, so we’re well aware of what they were doing. You know, it’s mind blowing. I mean, Aerosmith really went to town. Again, you’ve got to be at least on the same playing field with these guys to have a chance, you know?”

Snap decision on ‘Photograph’: With its vast collection of classics, Def Leppard picked “Photograph” to close the show, splaying snapshots across the LED panels.

“The obvious thing is that through the years you see the different looks, a little bit like we do in a video version of each other in the ‘Hysteria’ song, and we do photographs for ‘Photograph,’ Elliott said. “Up until this Vegas residency, we’ve been using photographs with the celluloid effect where the teeth of an old Kodak camera would catch the film as a boundary around the picture. This time we wanted to update it to the ‘70’s and ‘80’s and go to Polaroid. Now you’ve got all the young kids going, ‘I’ve never seen one of those.’ Nobody has them anymore. Try getting one of them on eBay.”

“It’s funny, I was watching a clip from ‘Die Hard (The Hunter)’ on my iPhone this morning, I’m looking at it, and I’m going, well this was my first gig in my 60’s, and I’m looking at the way that most people see us.. There’s an energy you can see. We don’t look exactly the same as 30 years ago, but we certainly don’t look like we’re tired. I don’t want to call it a youthful energy, but it’s youthful mentally, at least. When we get up on stage, we’re still 18 years old.”