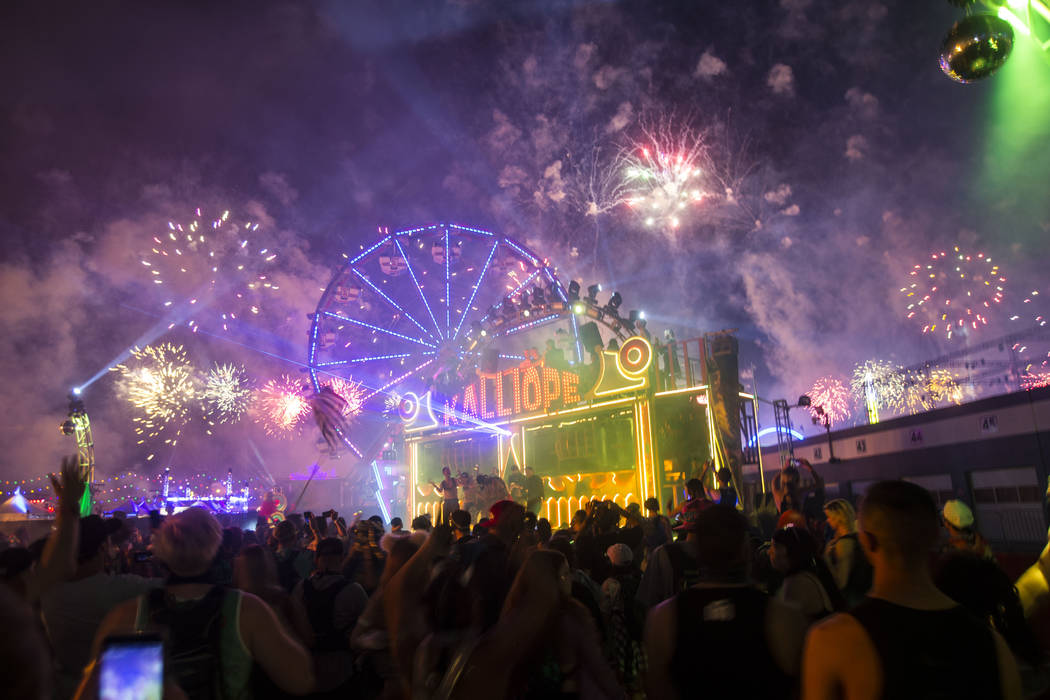 Fireworks go off above the Kalliope art car during the third day of the Electric Daisy Carnival at the Las Vegas Motor Speedway in Las Vegas during the early hours of Monday, May 21, 2018. Chase Stevens Las Vegas Review-Journal @csstevensphoto 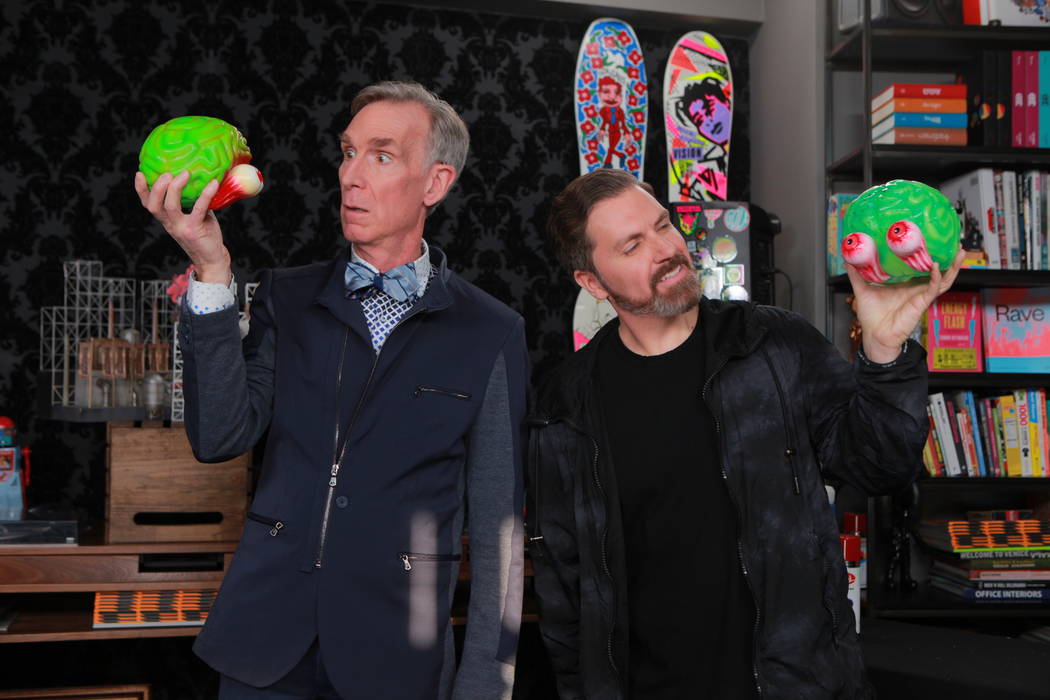 Bill Nye, "The Science Guy," is shown with Electric Daisy Carnival and Insomniac Events founder Pasquale Rotella are teaming on a "Kinetic Energy" theme for this year's EDC May 17-19 at Las Vegas Motor Speedway. (Insomniac Events) 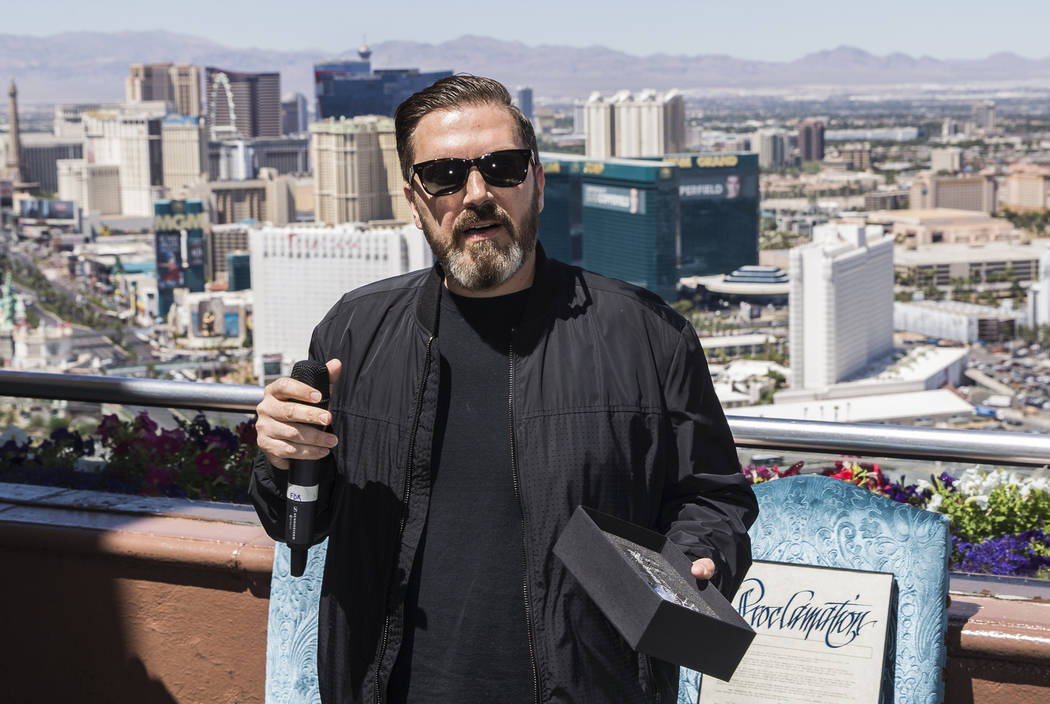 Insomniac founder/CEO Pasquale Rotella accepts a “Key to the Strip” during a ceremony on June 14, 2017, that also announced the temporary renaming of Las Vegas Boulevard to “Electric Daisy Ln.” during the week of the famed EDM festival Rotella's company created. (Benjamin Hager/Las Vegas Review-Journal) @benjaminhphoto 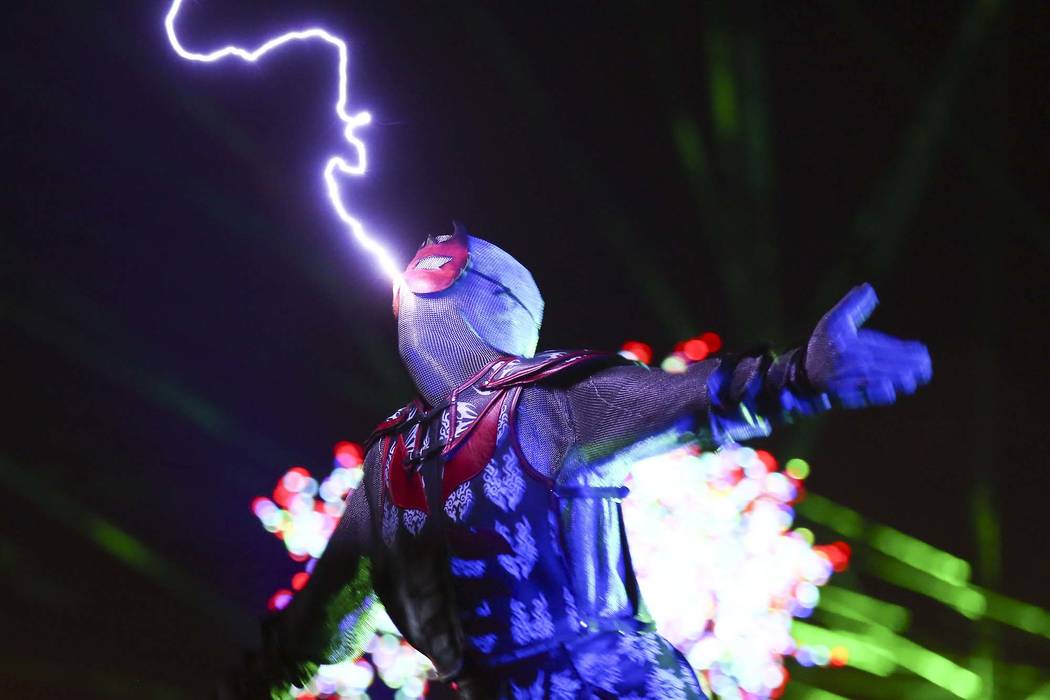 A member of SkyFire Arts performs during the third day of the Electric Daisy Carnival at the Las Vegas Motor Speedway in Las Vegas during the early hours of Monday, May 21, 2018. Chase Stevens Las Vegas Review-Journal @csstevensphoto 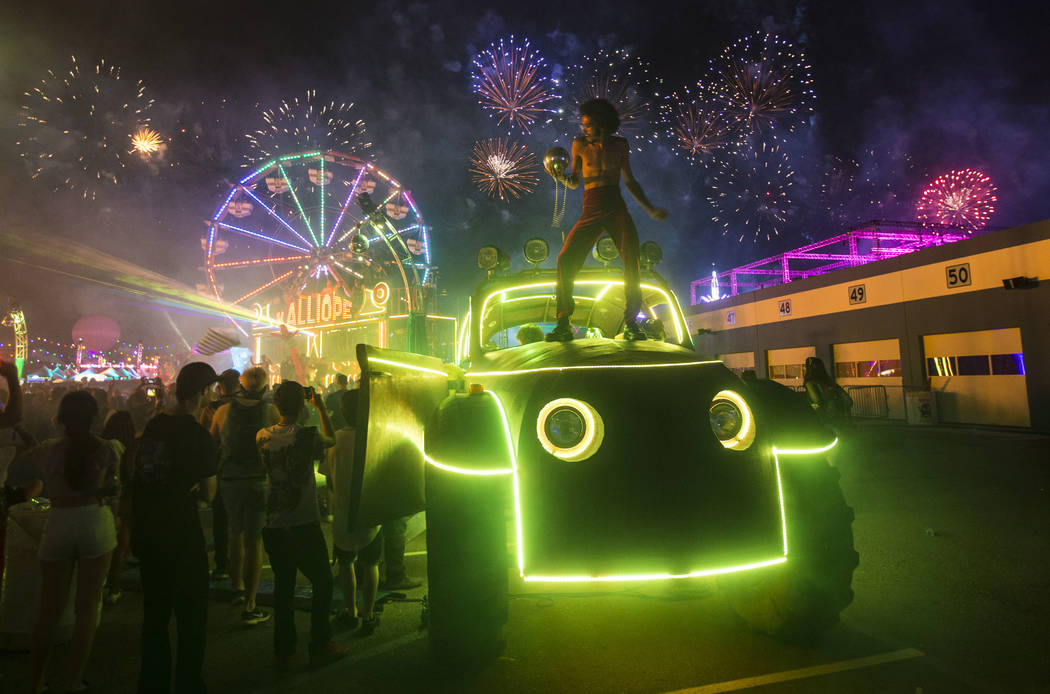 Deven Williams of the Kalliope dances on an art car as fireworks go off during the third day of the Electric Daisy Carnival at the Las Vegas Motor Speedway in Las Vegas during the early hours of Monday, May 21, 2018. Chase Stevens Las Vegas Review-Journal @csstevensphoto 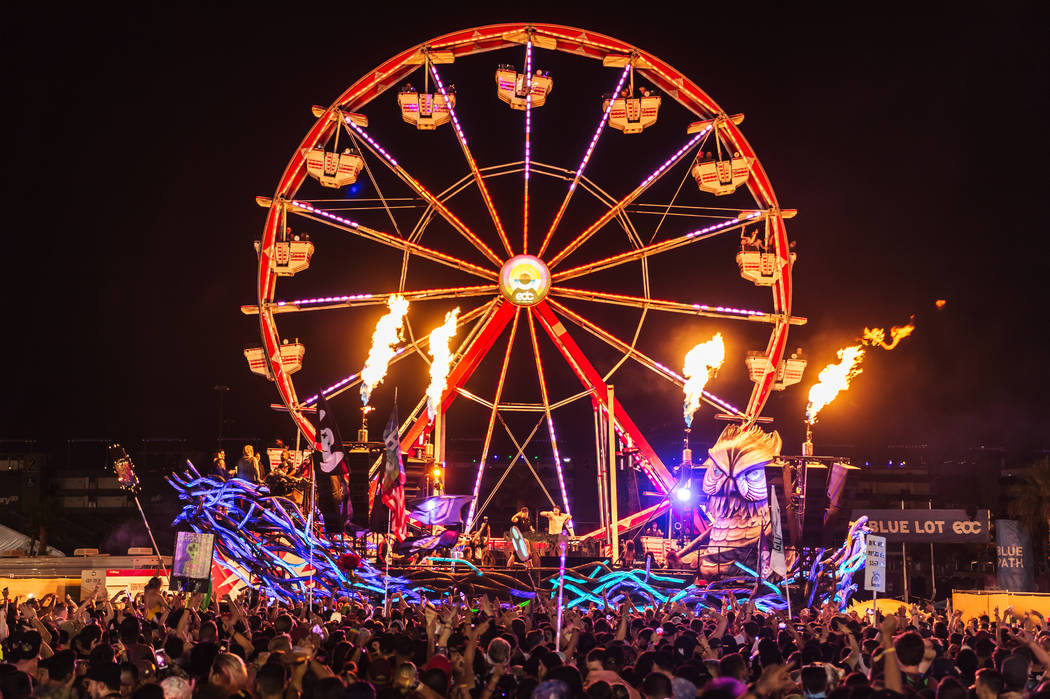 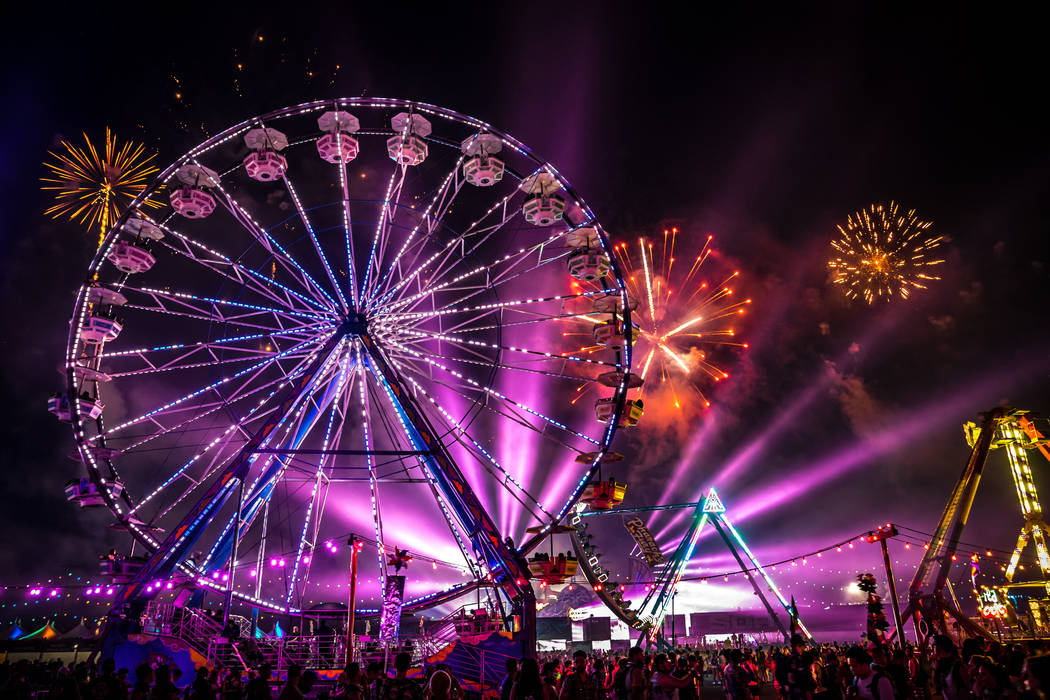 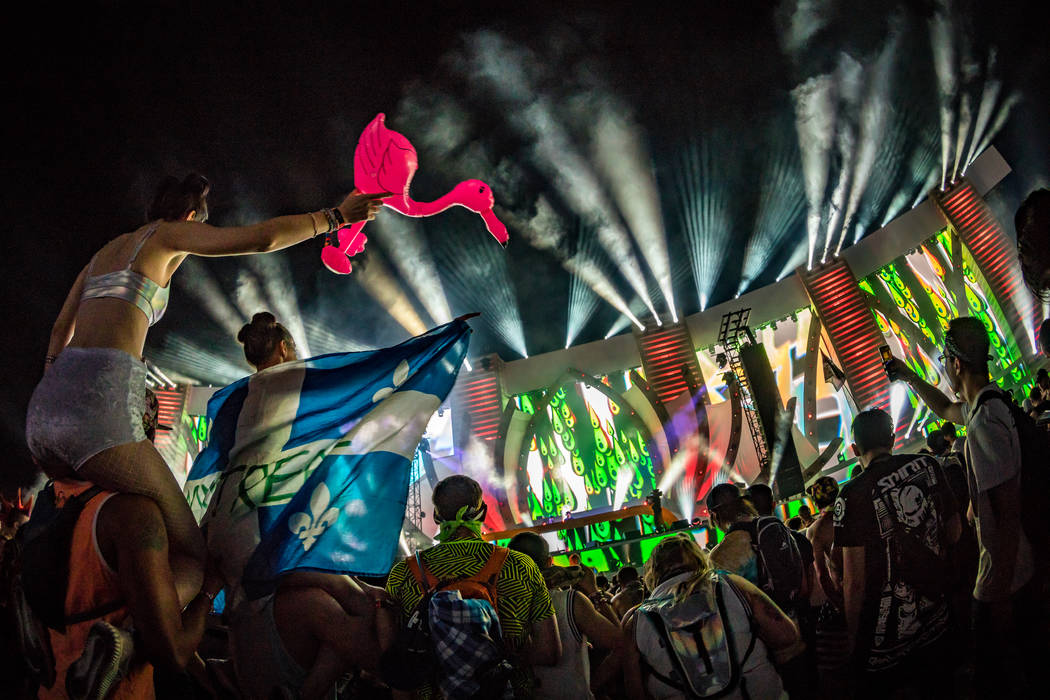 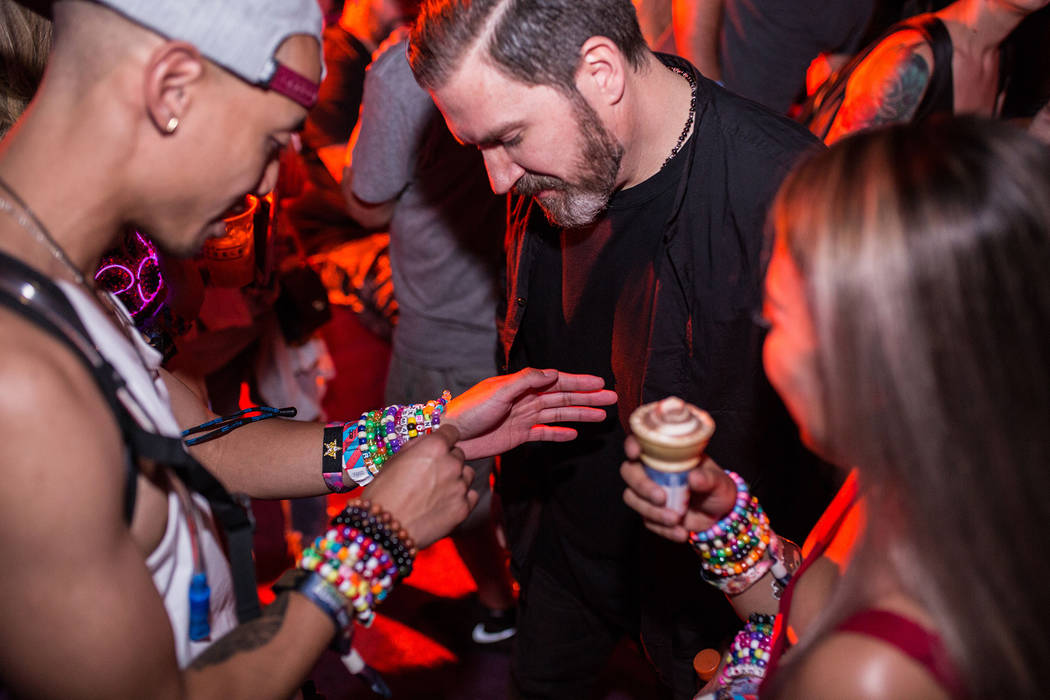 Pasquale Rotella’s inception of Insomniac Events was a warehouse rave in Los Angeles 23 years ago. It’s kind of a bigger deal today.

The EDC spectacle has taken place at the speedway since 2011, and remains the largest electronic dance music, or EDM, festival in the country.

More than 250 artists are set to perform, including Strip mainstays Alesso, Kaskade, Deadmau5 and Steve Aoki. The scene will again blossom in a visual-audio spectacle, with eight stages, a carnival, the overnight Camp EDC area and the new Downtown EDC. This year’s festival theme is “Kinetic Energy,” and none other than Bill Nye, “The Science Guy,” is kicking off the event Friday night at Cosmic Meadow.

The founder of EDC fielded a few questions recently in the runup to this year’s festival.

Review-Journal: Throughout the history of EDC, you’ve always said you want to improve and advance the event. What would you say is the biggest improvement for 2019 EDC?

Pasquale Rotella: So much, but the campgrounds — you will see a big improvement for Camp EDC. It’s being taken to another level. We are going to make the area more green with 2.5 million square feet of turf, artificial grass.

It really has. It was buzzing last year. This year it’s going to be better. We are going to have more activities. Yoga, speakers, aerobics, great food options, a spa, you can get your hair cut — it’s going to be pretty bad-ass. I’ll be camping myself.

Yes, I am. I’m going with an RV, so I will be out there. Camping probably isn’t the right word. It’s “Camp Glamping.” I just thought of that right now. It’s Camp Glamping, these are all glamping things. I’m looking at my team, asking why they didn’t tell me this (laughs). Glamping. It’s funny.

When the lineup was announced, Pasquale, you mentioned Downtown EDC. What is that about?

Downtown EDC is a new zone, new area in the walls of the EDC festival. It’s our version of a downtown. There will be a drag queen bar, a mini bar, a punk rock bar, there’s karaoke, there’s a disco nightclub, there’s a wedding chapel. … The karaoke bar is like a Tokyo-style bar.

So you can go into these venues and be yourself or experience something different, since this is the first year. We are going to continue to enhance that experience. It’s going to be located near the Cosmic Meadow.

Is EDC Las Vegas now at its limit with the duration and with how many people it can hold? Or will it continue to grow?

If you think about it, EDC is actually five days now. Thursday, full-blown campgrounds are activated and we have a big party Thursday night, and then opening ceremony party, and people are leaving on Monday.

I mean, I have thought about doing an extra day for EDC. You know it’s not going to for-sure happen, but it’s such a big production to build, and to only have it for three days is insane. It’s a city we are building out there. But the camping has made it great, and I’m not shying away from it starting on Thursday and having the campgrounds open a day earlier.

Are you as active today in EDC operations as you were when it moved to Las Vegas in 2011?

Oh, no! Ha-ha! I am very active in everything we do, but I have the best people in the world working here. I have an amazing team and we are doing so much around the world. I’m more making sure everyone is doing their job versus actually doing it myself, because that would be impossible. I look at and work on everything, but we have a much larger team than we did the first year we were here; 2020 will be our 10-year anniversary.