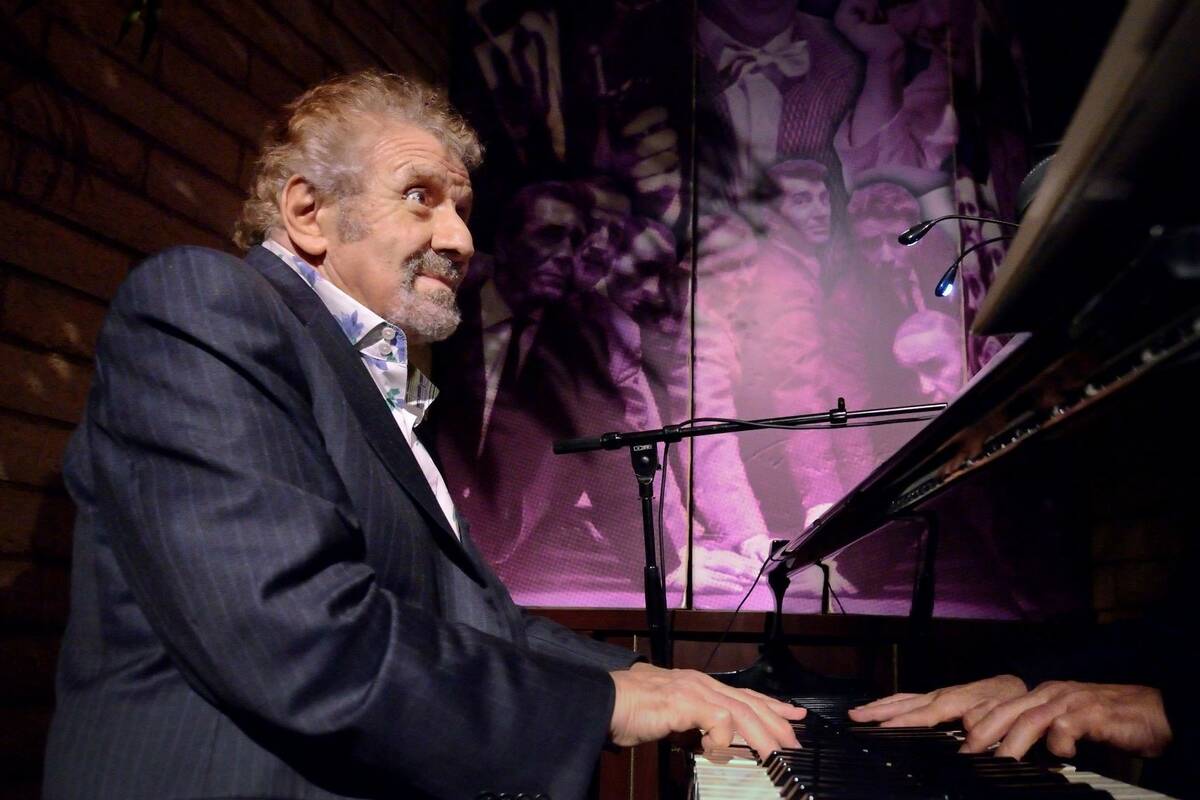 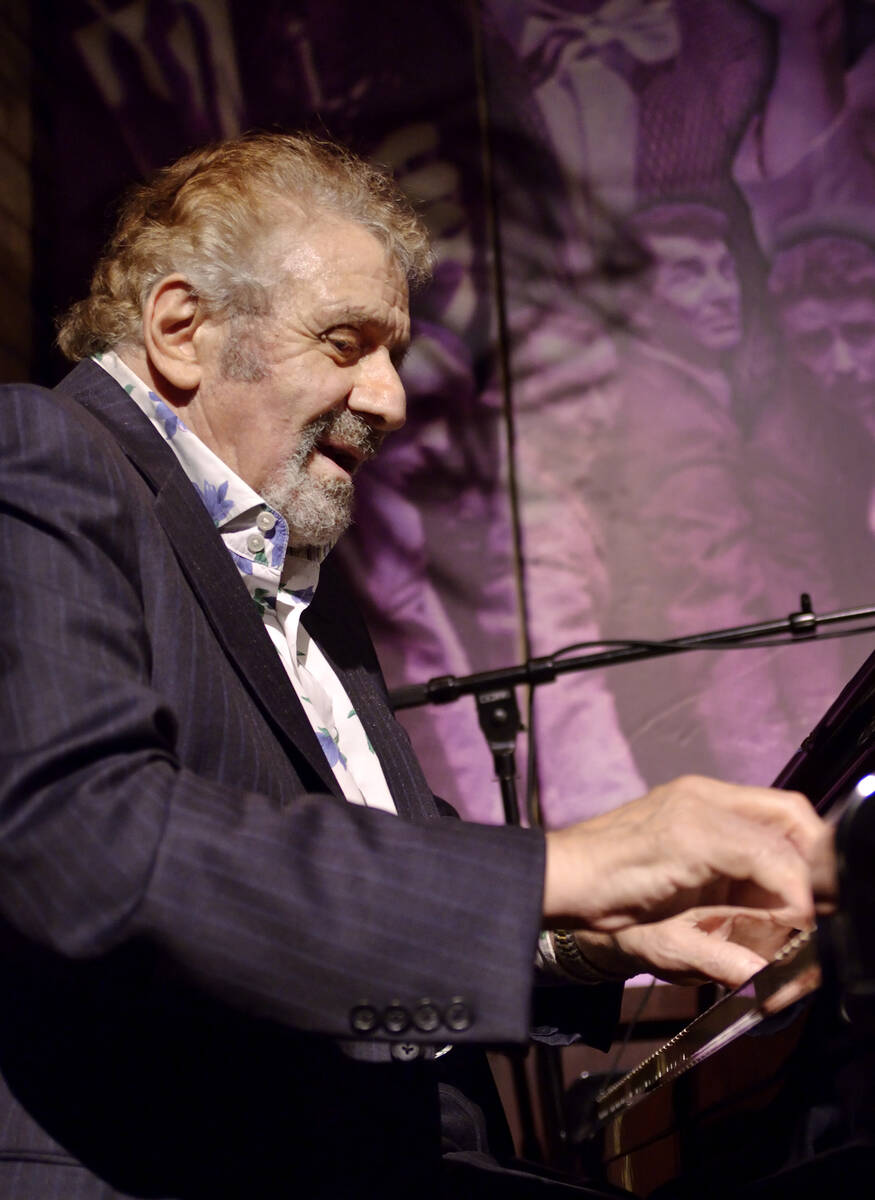 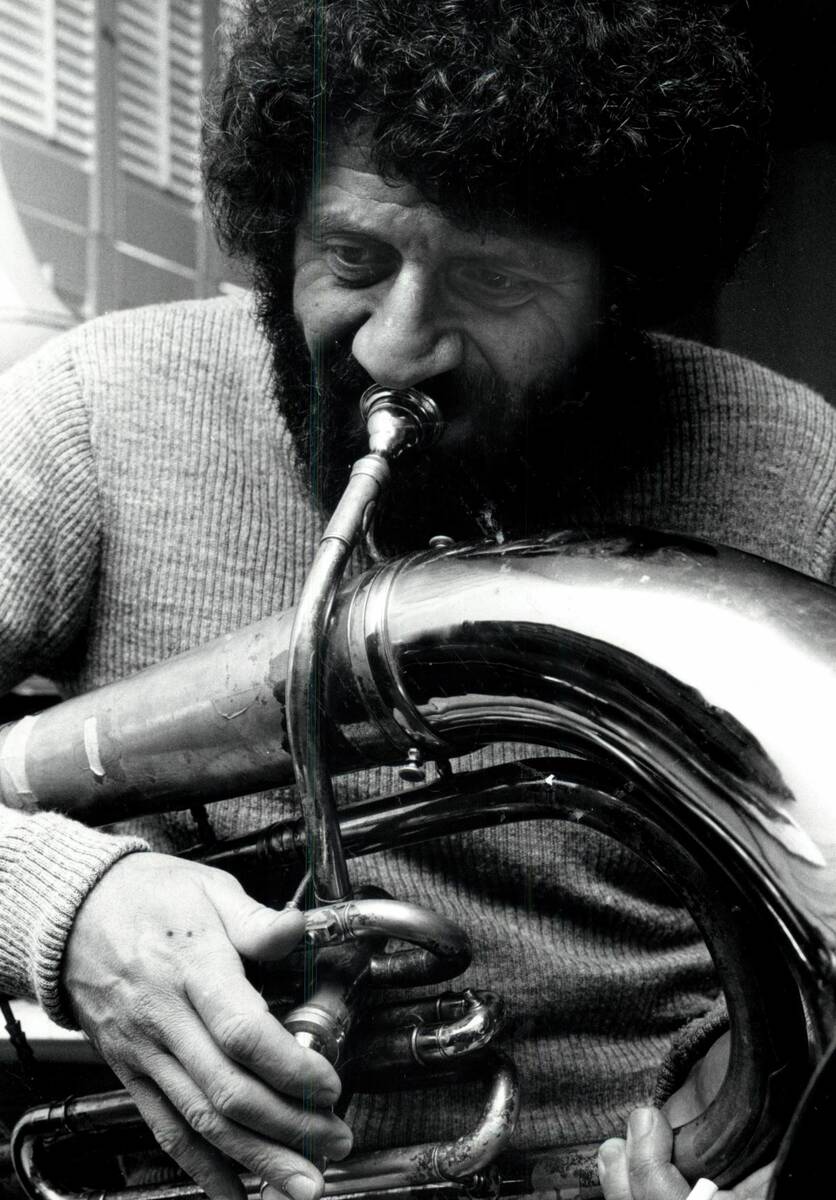 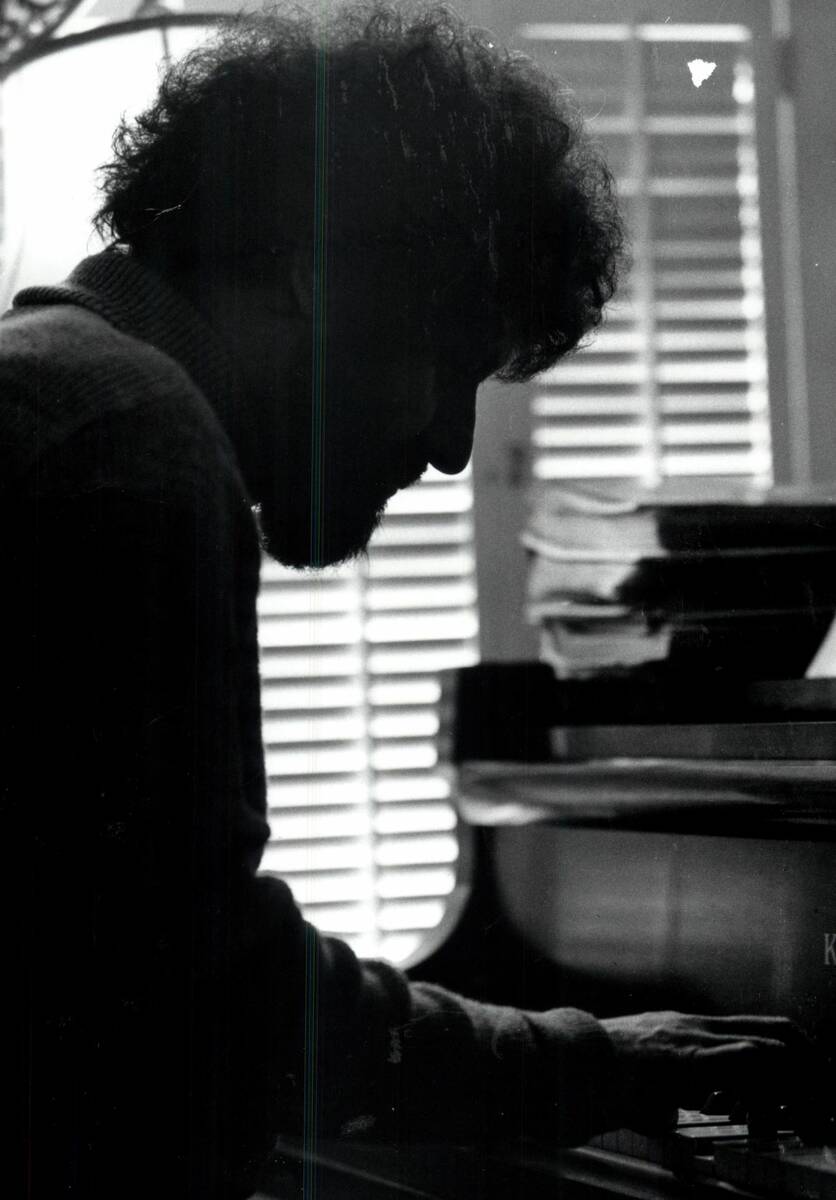 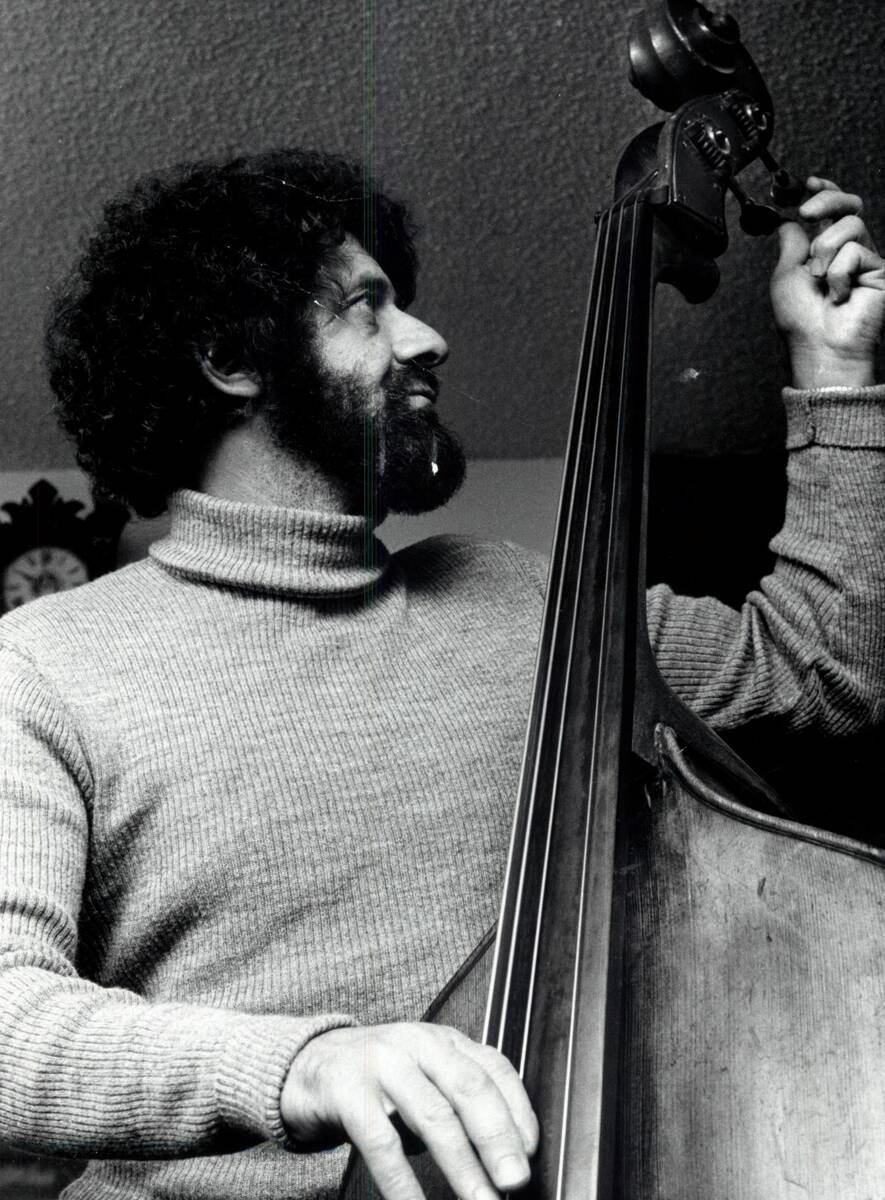 Gus Mancuso is shown tuning a stand-up bass in this 1979 photo. (Review-Journal file) 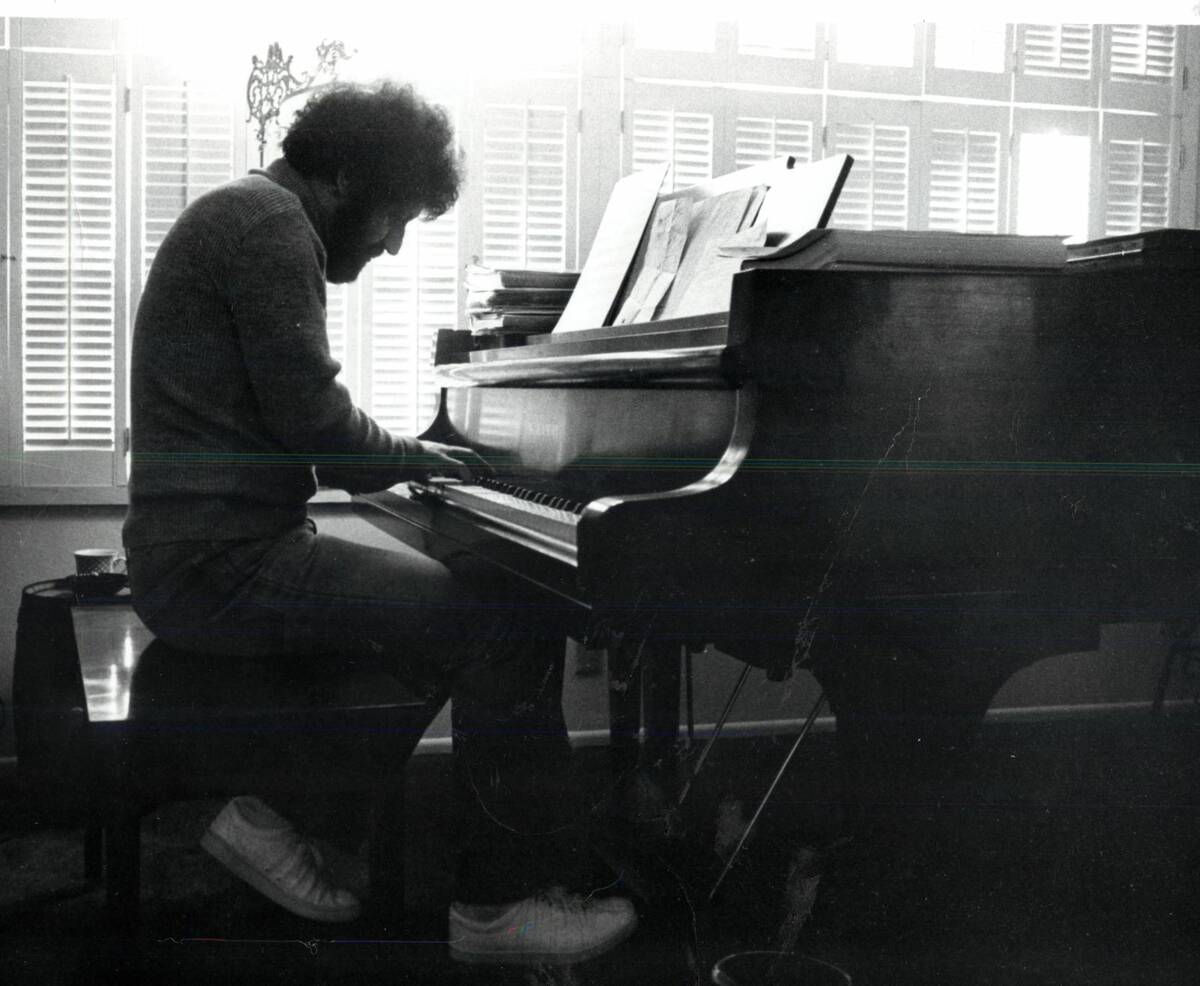 Gus Mancuso was 88 when he died. Fittingly, that’s the same number of keys on a piano, one of the many instruments he mastered.

Mancuso, a revered musician in Las Vegas who backed such legends as Sarah Vaughan, Billy Eckstine, Bobby Darin, Wayne Newton, Joe Williams, Debbie Reynolds, The Supremes and Roy Clark, died Thursday of Alzheimer’s disease. Mancuso was at the Las Vegas home of his musician son, Ronnie Mancuso, with whom he was living for the past year.

Mancuso was surrounded by his family at the time of his passing. Mancuso’s widow and wife of more than 40 years, Maggie Peterson Mancuso, portrayed Charlene Darling on “The Andy Griffith Show” in the 1960s. Mancuso’s survivors also include his grandson, Roman; and his granddaughter, Zia.

Mancuso was also earlier married to Lorraine Hunt-Bono (Laurie Perry in those days), owner of Bootlegger Bistro, which remains the Hunt-Bono family business.

Mancuso was a working musician in Las Vegas for more than 65 years. He played bass, piano, baritone horn, trombone and vibes with great proficiency. Mancuso was a musician to the end, even after being diagnosed with Alzheimer’s.

“He was playing his ‘Schmooze and Booze,’ shows until June of this year at the Bootlegger,” Ronnie Mancuso, who manages the Bootlegger, Copa Room and its adjacent studio, said Monday morning. “There has been an amazing outpouring of love and respect for my father.”

Vegas sax great Tom Hall, who was friends with Mancuso since the early 1950s, said of his friend, “I think he’d want to be remembered first as a musician, and he was a great musician. He was so well-rounded, and he was also a loving soul. If you can have a deep love for someone as a heterosexual, that was us. I loved him dearly.”

“He was one of the finest jazz musicians ever in to play in Las Vegas,” said Mulidore, who got to know Mancuso at the Black Magic Jazz Club on Tropicana Avenue and Paradise Road. “He was great on the baritone horn, and he played the stand-up bass better than anybody. He was a great pianist, too. He was an incredible musician, and a great friend to musicians.”

Born in Hastings, Pa., Jan. 5, 1933, Mancuso grew up in Rochester, N.Y., counting Chuck Mangione, Joe Romano and Steve Gadd among his contemporaries. Mancuso served in the Army in the early 1950s, then joined the Tommy Pastor Big Band.

Hall met Mancuso at Fort Lee, N.J., when the two were in the Army band.

“We did mostly PR work for the army, visiting VA hospitals and colleges, that sort of thing,” Hall said Monday. “We would play in the band and also had our own floor show where we would tap dance, sing and play our instruments. We were there to explain to college kids that you could do this, too, if you join the Army. Gus was very good with that message, because he played so great and had so much fun.”

Mancuso hit town with the Pastor band in ‘55. But when the band left Las Vegas, he stayed, realizing he could make a good living as a musician without having to tour. Soon, Mancuso was performing with the Mary Kaye Trio, forerunners of the golden era of lounge entertainment in Las Vegas.

Mancuso was already well-known in the industry. He was named the Playboy Jazz Poll’s New Artist of the Year honor after releasing his debut album, “Introducing Gus Mancuso.” He played every instrument on the follow-up, “New Faces,” and is featured in Leonard Feathers’s “Encyclopedia of Jazz” as the musician who brought the baritone horn (a kind of mini-tuba, with the same range as a trombone) to prominence in jazz music.

Mancuso would tour the world with Vaughan, the wonderful and legendary jazz singer, for 17 years, playing stand-up bass. He also toured extensively with Eckstine, himself a jazz legend. Mancuso was a go-to musician hired in several hotel-casino shows with the above-mentioned superstars.

During a period in Los Angeles, Mancuso played alongside with Quincy Jones for a concert series at the Greek Theater (the roster included stars-of-the-day The Brothers Johnson).

Mancuso also toured with the famed Les Brown Band of Renown. He taught music at UNLV, tutoring many musicians who play on the Strip and elsewhere.

Frank Leone, a topnotch pianist and former president of the Las Vegas musicians’ union, met Mancuso in 1967. This was just after Leone moved to town.

Leone recalls a show in which Vaughan lost the lyrics midway through the ballad, “I Remember You.”

“She got to the bridge, and stopped, and called out, ‘Gus! What’s next?’” Leone said. “And Gus says, ‘G minor 7!’ He gave her the chord progression instead of the lyric, a total musician’s answer. Vaughan cracked up so much she coudn’t sing.”

Leone added, “You don’t play for 17 years with Sarah Vaughan unless you can play.”

Mancuso will be honored with a burial service 2 p.m. Feb. 3 at the VA cemetery in Boulder City. A celebration of life is to follow at 5 p.m. at the Copa Room at Bootlegger Bistro, with many Vegas performer taking part. Donations will benefit Keep Memory Alive, for the Cleveland Clinic Lou Ruvo Center for Brain Health.

Hall was the last musician to play alongside Mancuso, at Ronnie’s house. He brought his sax over. and plugged in a keyboard for Gus. The two performed a few of the thousands of tunes they knew, among them “But Not For Me,” ““Bye-Bye Blackbird,” and “Polka Dots and Moonbeams.”

“When we started playing, he would come alive and be right there with me, talking about the old days,” Hall said of his friend of 70 years. “He would keep up, then get lost a little, then come right back to it. The music kept him going.”

Staying with Bootlegger Bistro, it’s pianist Doug Taylor on Tuesday, harpist Mariano Gonzalez on Wednesday and Thursday; and pianist/singer George Bugatti followed by Joey Melotti Jazz Duo on Friday and Saturday. All in the main dining room. No cover, but tip in the Mancuso spirit.