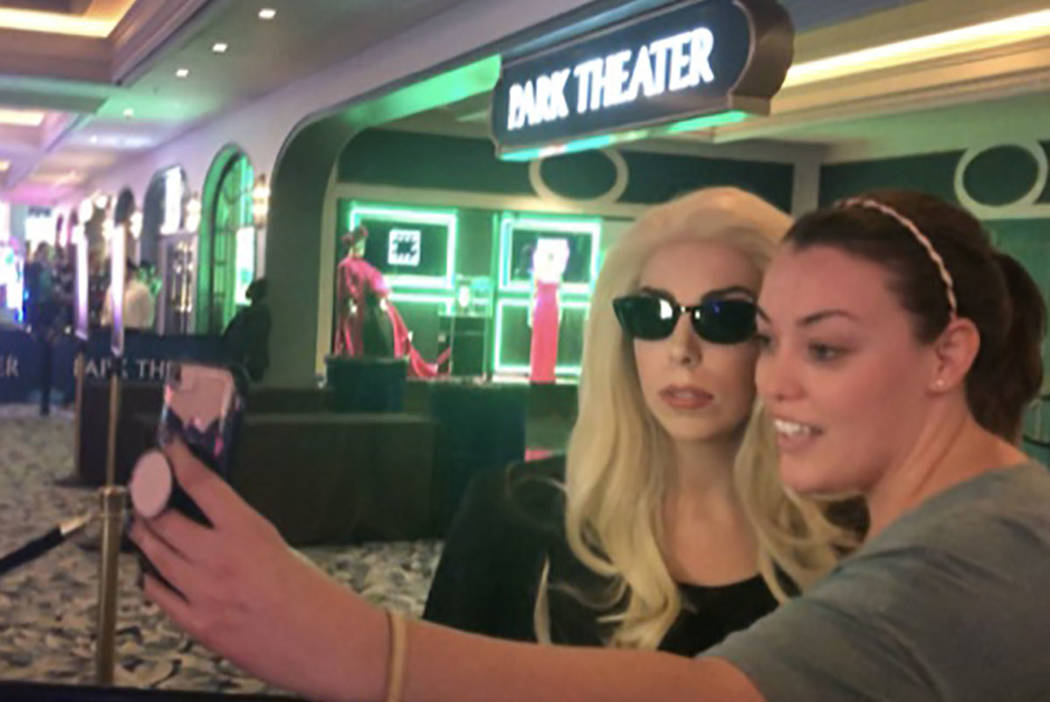 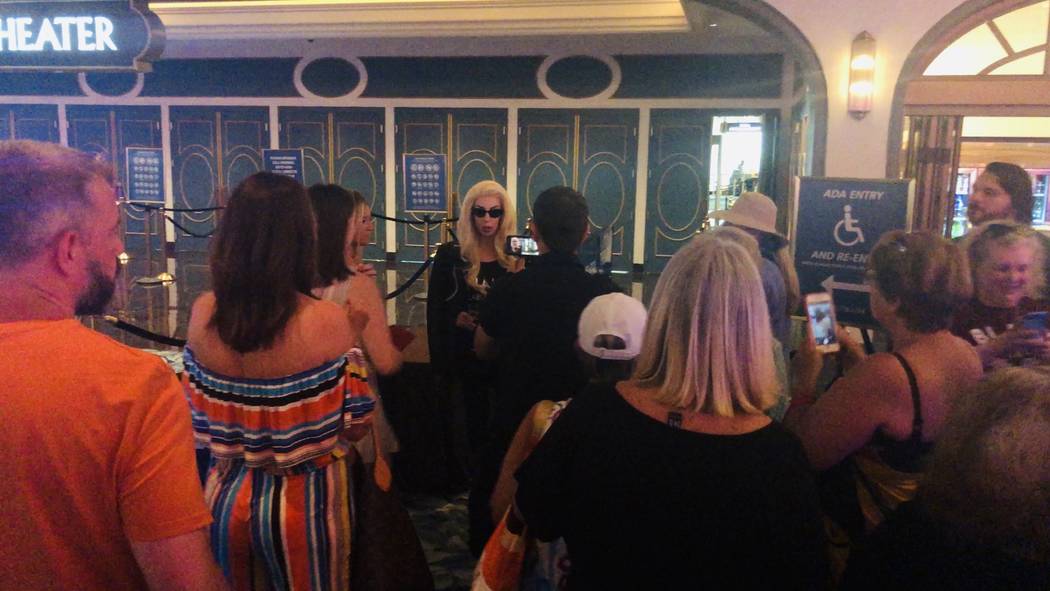 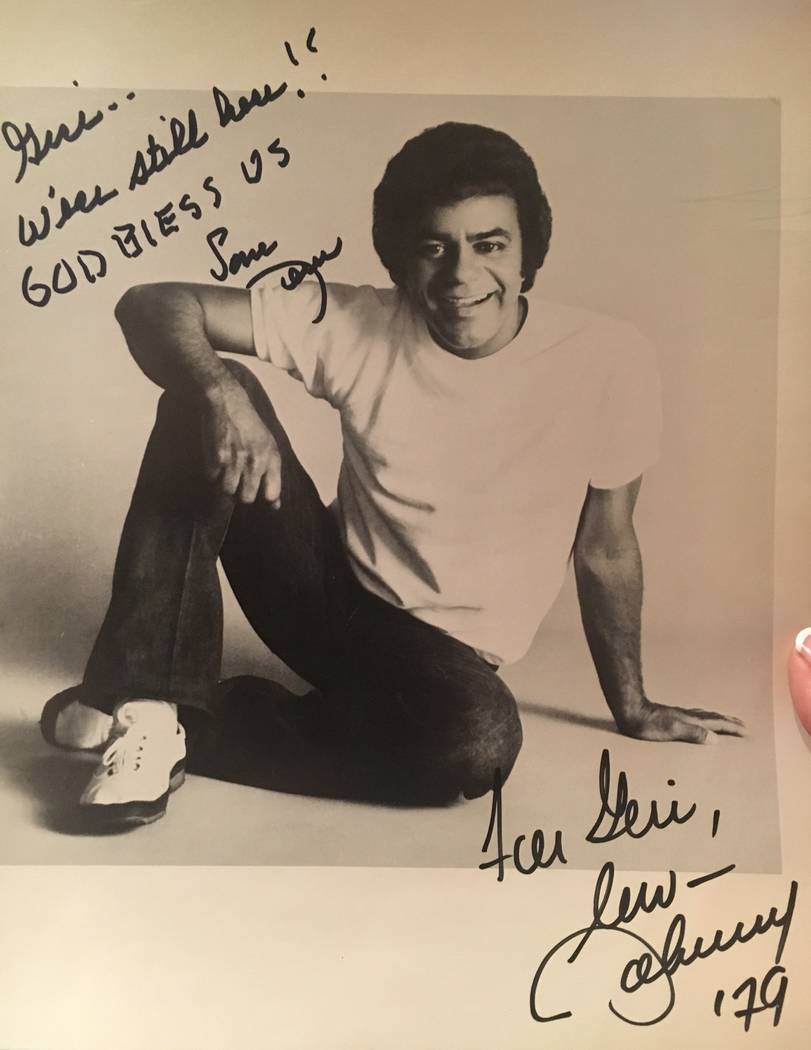 The promotional photo signed by music legend Johnny Mathis for violinist Geri Thompson, 40 years apart, in 1979 and again on May 18. (Geri Thompson)

Twice, Lady Gaga showed up at the opening of Haus of Gaga at Park Theater on Thursday. The real Gaga arrived at about 5:15 p.m., shortly before her “Enigma” performance, to greet fans and touch off the requisite bedlam.

But earlier, dozens of fans were teased like one of Gaga’s wigs on display in the new boutique.

“Legends” at Tropicana tribute artist Tierney Allen showed up in her full Lady Gaga attire just before Haus of Gaga opened to the public at noon. Allen arrived at the event with her family, and found the line was far too long to wait in — even for a fake Gaga.

Allen and her troupe moved to Eataly to sort out a game plan.

“I said, ‘If people are going to be staring at me, let’s get some social-media posts and make something out of it,’ ” Tierney said. “I went back to the bar, and immediately people just started gathering around me.”

Allen, who has played Gaga in “Legends” for a decade, moved around the casino, but not to the Haus of Gaga entrance.

“That’s where the ‘super fans’ are, and they would have known I’m not her,” Allen says. “I had about 50 people around me by the theater.”

Allen says when people ask who she is, “I never confirm nor deny. They ask, ‘Are you really her?’ I usually say, ‘Am I?’ And they come back with, ‘Yes, you are!’”

But no, she’s not. Allen has actually required security escort from Strip hotels. Security hustled her out of MGM Grand in 2011 after Gaga’s appearance at iHeartRadio Music Festival.

“I had to be taken out through the Undergound, I was so mobbed,” Allen says. “There were people on each other’s shoulders, people on top of slot machines. It was insane.”

The Gaga character is the only living “Legend” in the stage show at the Trop. Elvis, Sinatra and Whitney Houston are in the current cast. “Legends” exec Mark Mercer says he’s trying to get Gaga to make the trip across the Strip to see Allen’s portrayal. “Michael Jackson came to the show, Shania Twain has seen herself in it,” Mercer says. “I think she’d get a kick out of it.”

Derek Stevens has the gift of perspective. The co-owner of the D Las Vegas, Golden Gate and under-development Circa resorts on Fremont Street is about to open Circa Sports, his company’s sports-gaming brand. He offered a preview Friday morning at the first book, at Golden Gate.

The Big Tease for the Circa Sports ribbon-cutting is a “no juice” or “no vig” option for bets made at Golden Gate. The odds are even-money, with no percentage taken by the hotel.

“The best analogy for this promotion, it’s like Barbra Streisand at opening night of MGM Grand,” Stevens said, beaming and nodding at the comparison. “It’s like Coldplay at opening night at Cosmo. From a sports bettor’s perspective, these guys would rather see this than Streisand or Coldplay.”

They would, seriously. But the promotion is only for Saturday’s first day of operations, because you can only open once.

Thompson first performed with Mathis at Harrah’s in Lake Tahoe. She brought a then-new publicity shot, and Mathis signed it with ‘79 as the year. Thompson was again in the orchestra for Mathis’ show on May 18 at the Smith Center, and Thompson brought the same photo.

V Theater at Miracle Mile Shops at Planet Hollywood is a haven for underdog shows. “Zombie Burlesque” remains one of the most underrated delights in the city. I caught “Vegas Gone Country” in the same V3 Theater space this week, and it, too, is a righteous jam session. Great cast headed up (on this visit) by host Kelly Vohnn as Reba McEntire. Worth a spin, especially if you like the country music … The reason “Legends” has lopped its matinee shows is 1) matinee shows are a tough sell, especially for productions; and, 2) the show already has a choice 7:30 p.m. slot, which was not the case when it was required to perform 4 p.m. shows at Flamingo Las Vegas … Christopher Kenney, who plays Edie in “Zumanity,” and Jamie Morris of “Puppetry of the Penis” are performing a showcase of their “Faaabulous! The Show,” at 7 p.m. June 26, 28, 39 and 5 p.m. June 30 at Ron DeCar’s Event Center. The show is billed as the only live-singing drag show in VegasVille.