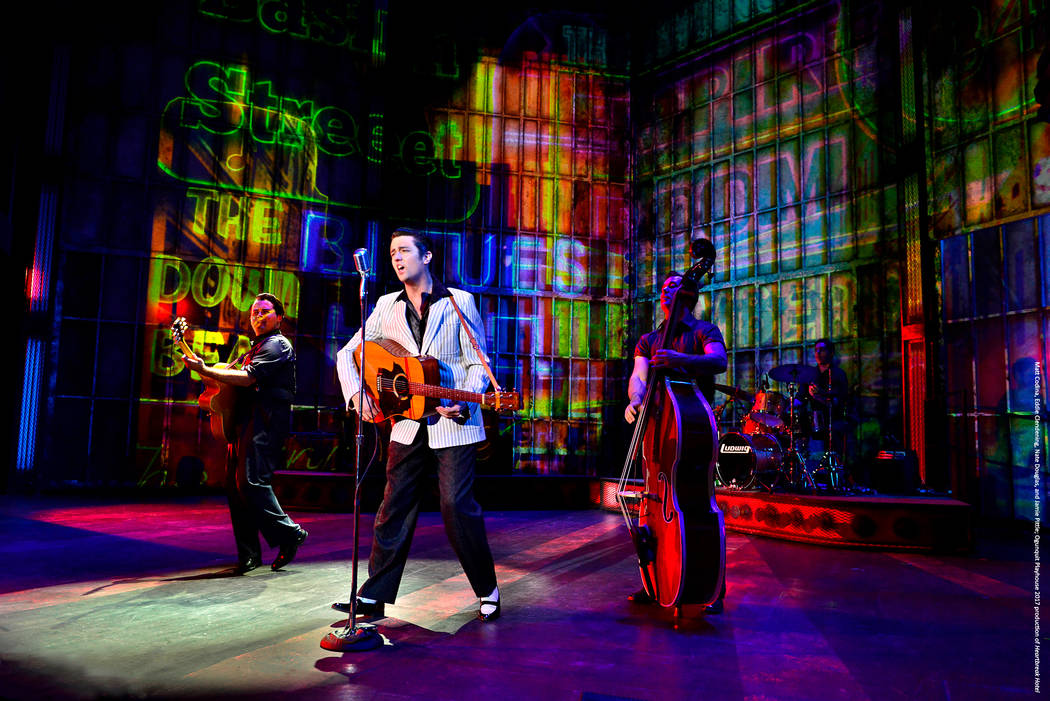 Fans of the King of Rock ‘n’ Roll are gonna find a new place to dwell.

“Elvis Presley’s Heartbreak Hotel in Concert,” charting the King’s early years, opens at Harrah’s Showroom on April 15, performing 8 p.m. Wednesdays through Mondays (dark Tuesdays) with additional 3 p.m. performances Sundays. (Tickets are on sale Tuesday and start at $49, minus fees, and are available at Harrah’s box office, harrahslasvegas.com, ticketmaster.com or by calling 702-777-2782.)

The future of the show “Heartbreak” is replacing — Tenors of Rock — is unclear. It is certain the Tenors end their run at Harrah’s on March 25. Producer Seth Yudof of UD Factory says venue renovations need to be agreed upon before the five-man vocal group can announce its next home (with Sin City Theater leading the list of possible rooms). The Tenors have held down the 8 p.m. slot but have been reviewing venues ever since Caesars Entertainment became interested in the Presley show.

The Righteous Brothers are holding down the 6 p.m. slot at Harrah’s Showroom on Tuesdays through Thursdays.

The “Heartbreak” concert show is something the prequel to “Million Dollar Quartet,” the production depicting the Dec. 6, 1956, meeting between Elvis, Johnny Cash, Jerry Lee Lewis and Carl Perkins at Sun Studios that played Harrah’s for nearly four years before ending in 2016. The Vegas show is inspired by the musical originally written and directed by Floyd Mutrux, adapted for the stage by Ivan Menchell. Broadway veteran Jeff Calhoun is staging the show at Harrah’s.

“Heartbreak” most recently played Chicago’s Broadway Playhouse Place from June 30-Sept. 9. Similar to “MDQ,” the music in the rock ‘n’ roll show is performed live. But unlike “MDQ” and its own original production, the Vegas versoin of the Elvis show is primarily a concert performance. There is band banter, but no script, in this show.

A holdover from the show’s earliest edition, Eddie Clendening, is tackling the lead role as the King.

Clendening is a star among Elvis tribute artists, originating the Presley role in “MDQ” on Broadway for 2,200 performances. The Blue Moon Boys, Elvis’s original backing band, are represented by Matt Codina, who originated the role of guitarist Scotty Moore in the musical; bassist Jonny Bowler, who has backed Wanda Jackson, Guana Batz and Levi Dexter; drummer Cole Maxwell, who has backed Andre Williams, Dick Dale and Brian Setzer; and pianist/music director Colte Julian, who portrayed Lewis on “MDQ’s” national tour.

Significantly, “Heartbreak” is an estate-licensed production formally authorized by Elvis Presley Enterprises and Authentic Brands Group. The show’s producers, Robbins Lane Entertainment, have a history in Las Vegas with its “Rock of Ages” musical, which ran at Venetian and Rio for a little more than three years, ending New Year’s Day 2017.

“There is no better place for ‘Elvis Presley’s Heartbreak Hotel in Concert’ to perform than in Las Vegas, the city where Elvis Presley performed some of his most memorable shows,” Scott Prisand, producer for Robbins Lane Entertainment, said in a statement. Seth Fass of Robbins Lane added, “Whether you love Elvis, love his music or just love a good storytelling concert about the birth of rock ‘n’ roll, this production has something for everyone.”

But even as Presley and Las Vegas are inexorably linked, the Elvis brand has not been a surefire hit in major Vegas venues. The Elvis Presley Enterprise-licensed Elvis show and museum attraction faltered at Westgate Las Vegas (in the very theater Presley sold out 636 consecutive shows) in the spring of 2015.

Also, “Viva Elvis,” a highly anticipated and seemingly invulnerable partnership between Cirque du Soleil and the Elvis estate at Aria, closed in a 2½-year run in August 2012. That show was the rare Cirque production that did not take hold in Vegas, even as a tribute to one of the city’s greatest entertainers.

But Elvis survives as a key figure in “Legends in Concert” at Tropicana, and with Steve Connolly’s long-running “Spirit of the King” show at Four Queens. The Elvis-powered “All Shook Up” has been running for five years at V Theater at Miracle Mile Shops. And Pete “Big Elvis” Vallee has been churning out the Presley hits for 22 years on the Strip. Today, you can find him at Piano Bar at Harrah’s, just downstairs from the entrance of “Heartbreak Hotel.”