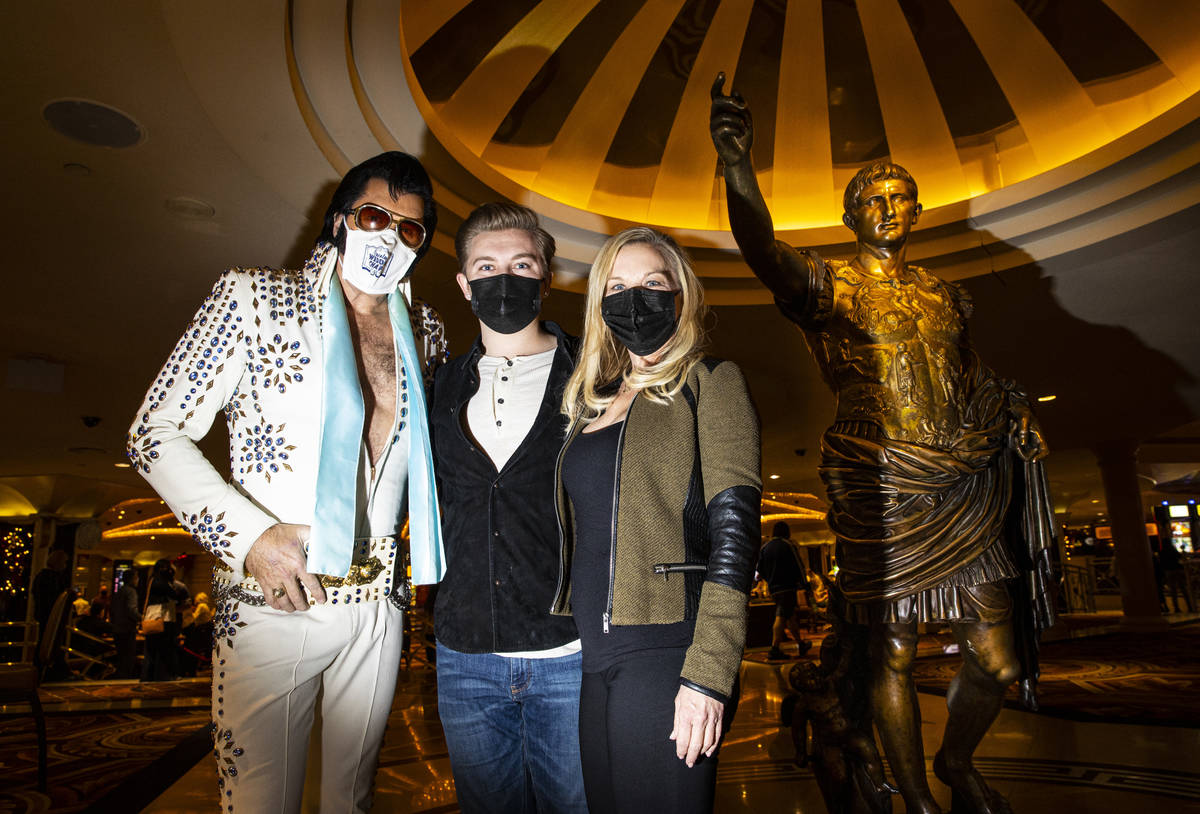 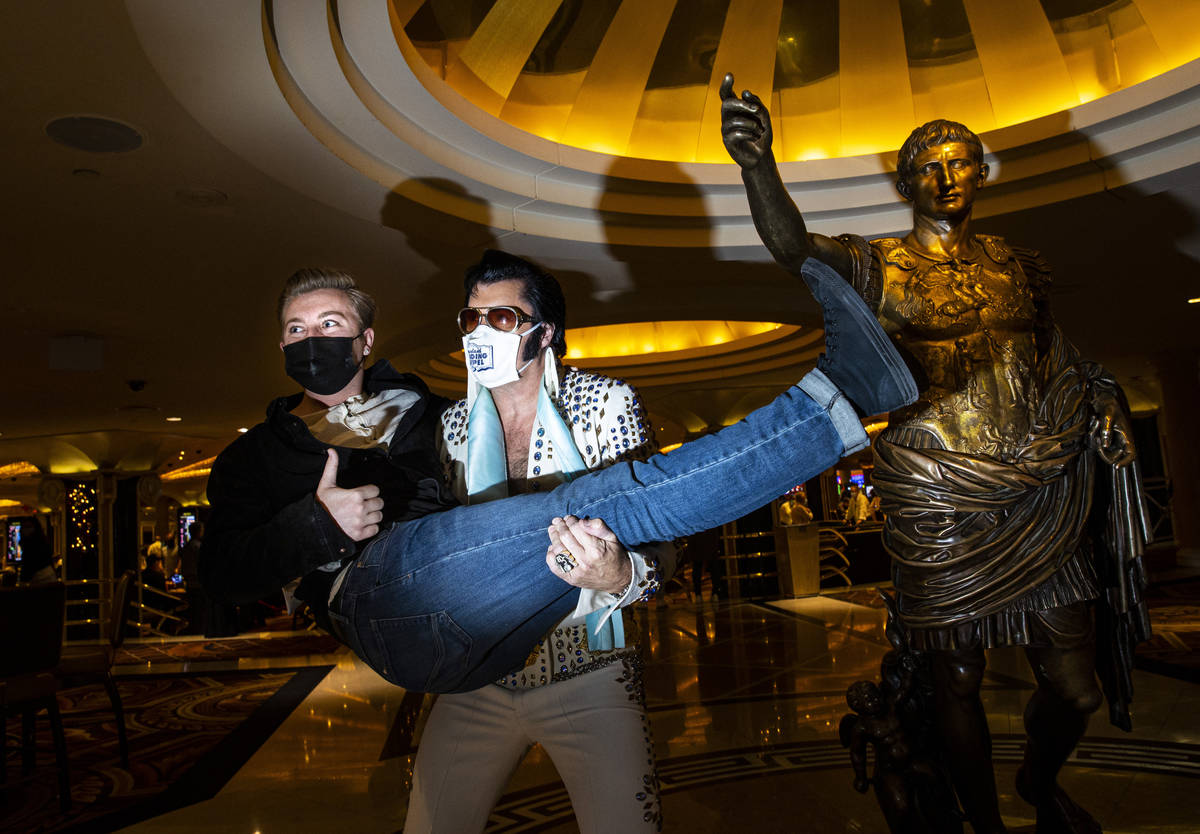 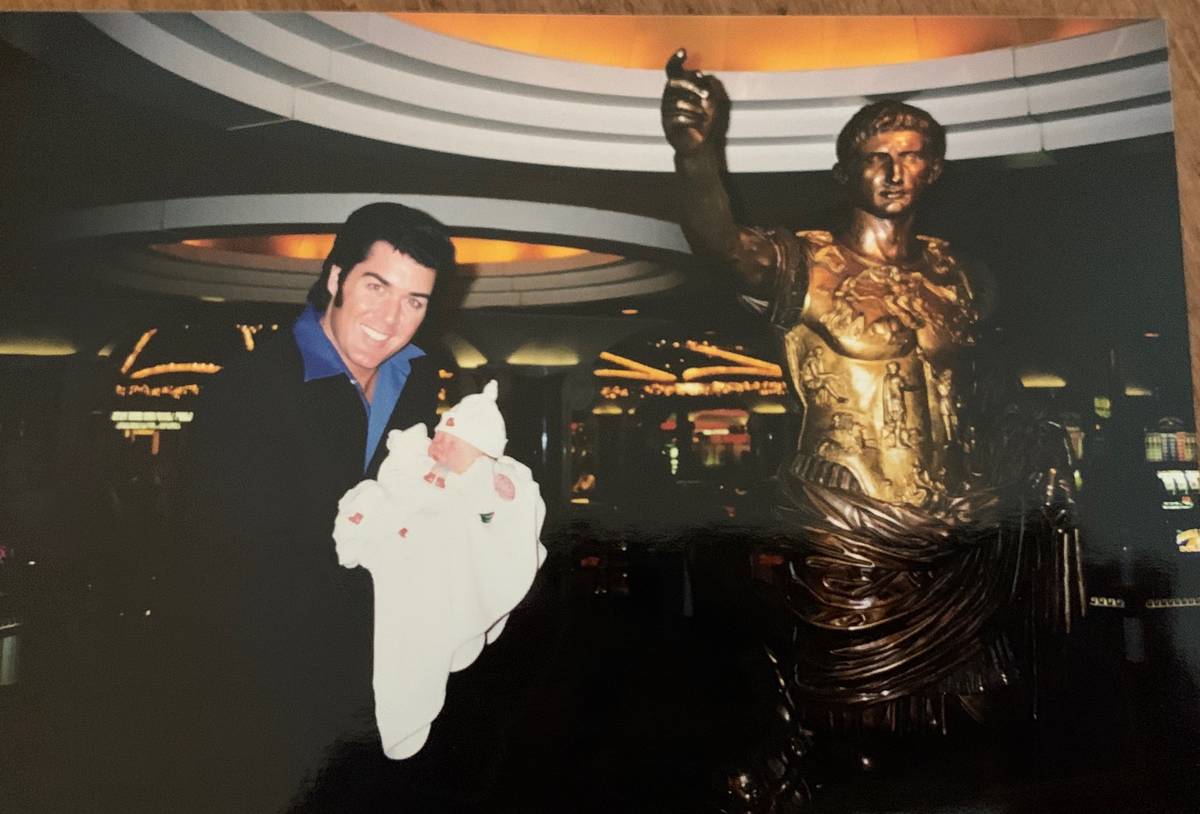 Brendan Paul is shown with his son, Cole Davis Duffy, at Caesars Palace just hours after the baby was born on Jan. 1, 2000. (Dee Dee Duffy) 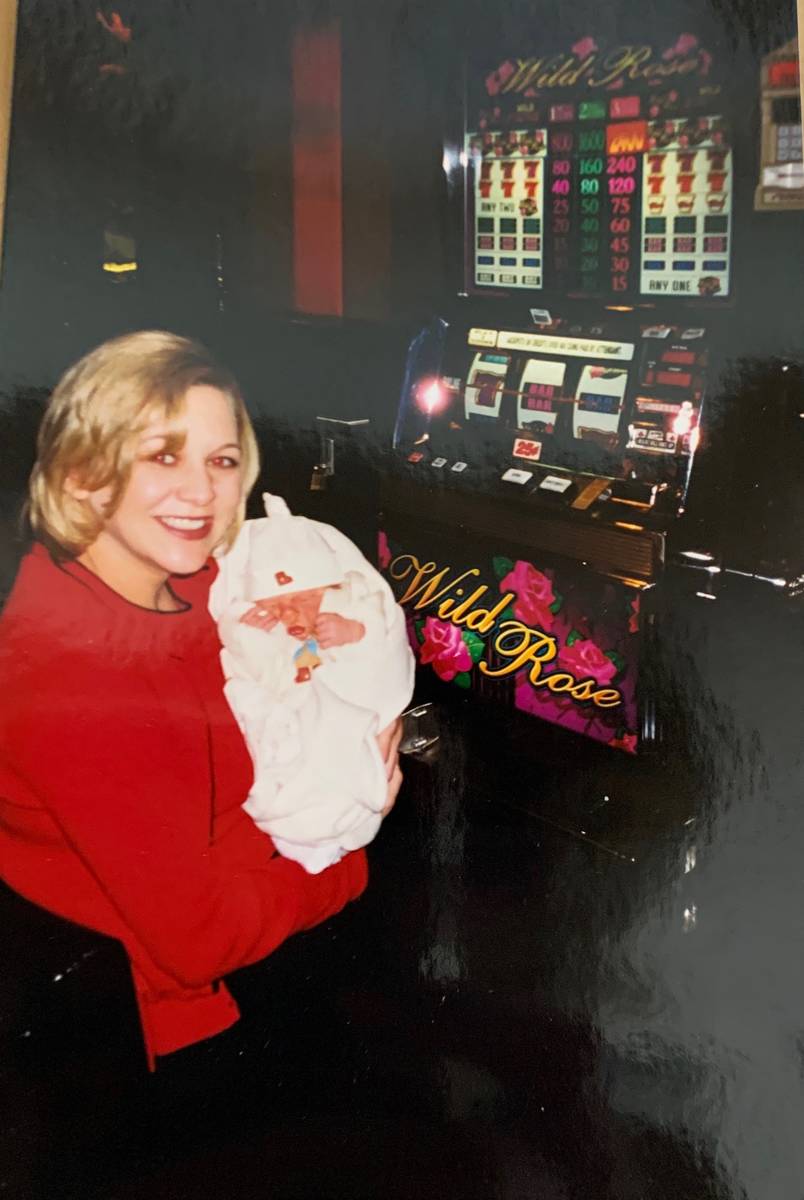 Dee Dee Duffy is shown with her son, Cole Davis Duffy, at Caesars Palace just hours after the baby was born on Jan. 1, 2000. (Brendan Paul) 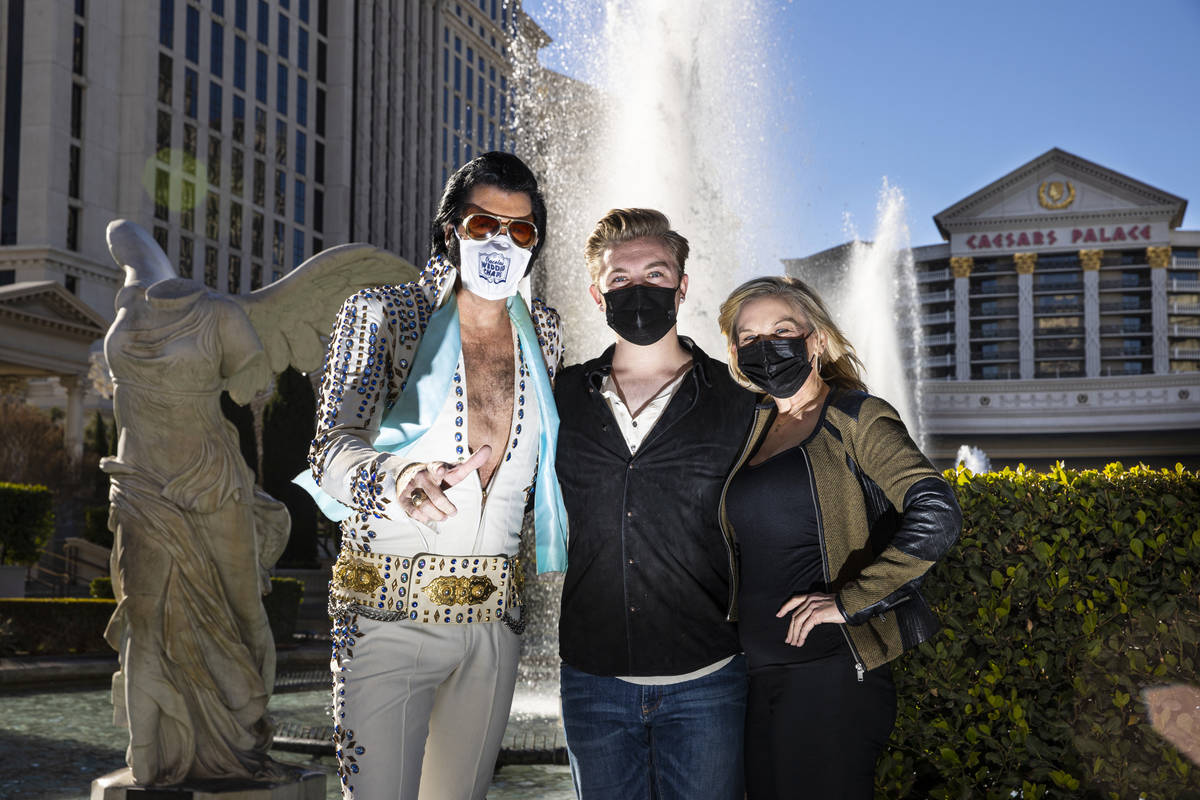 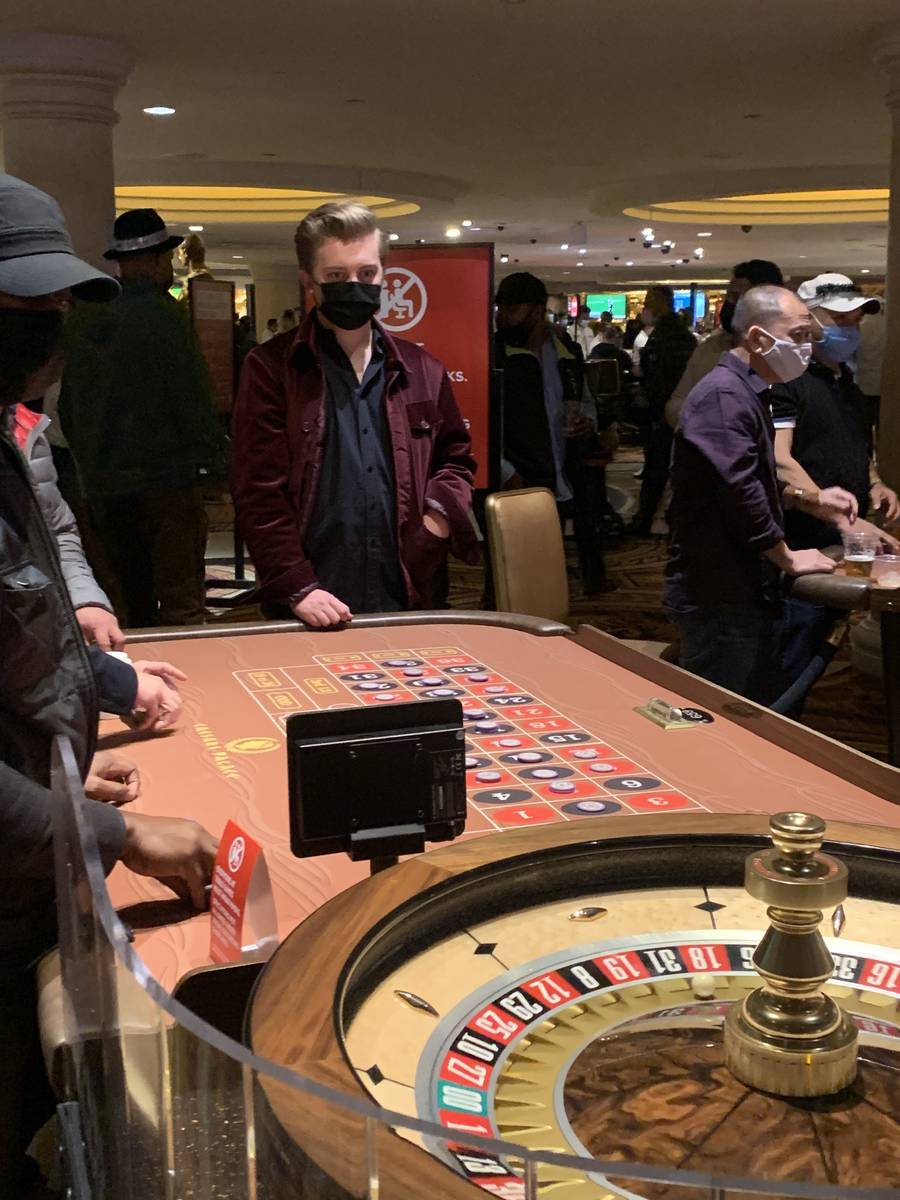 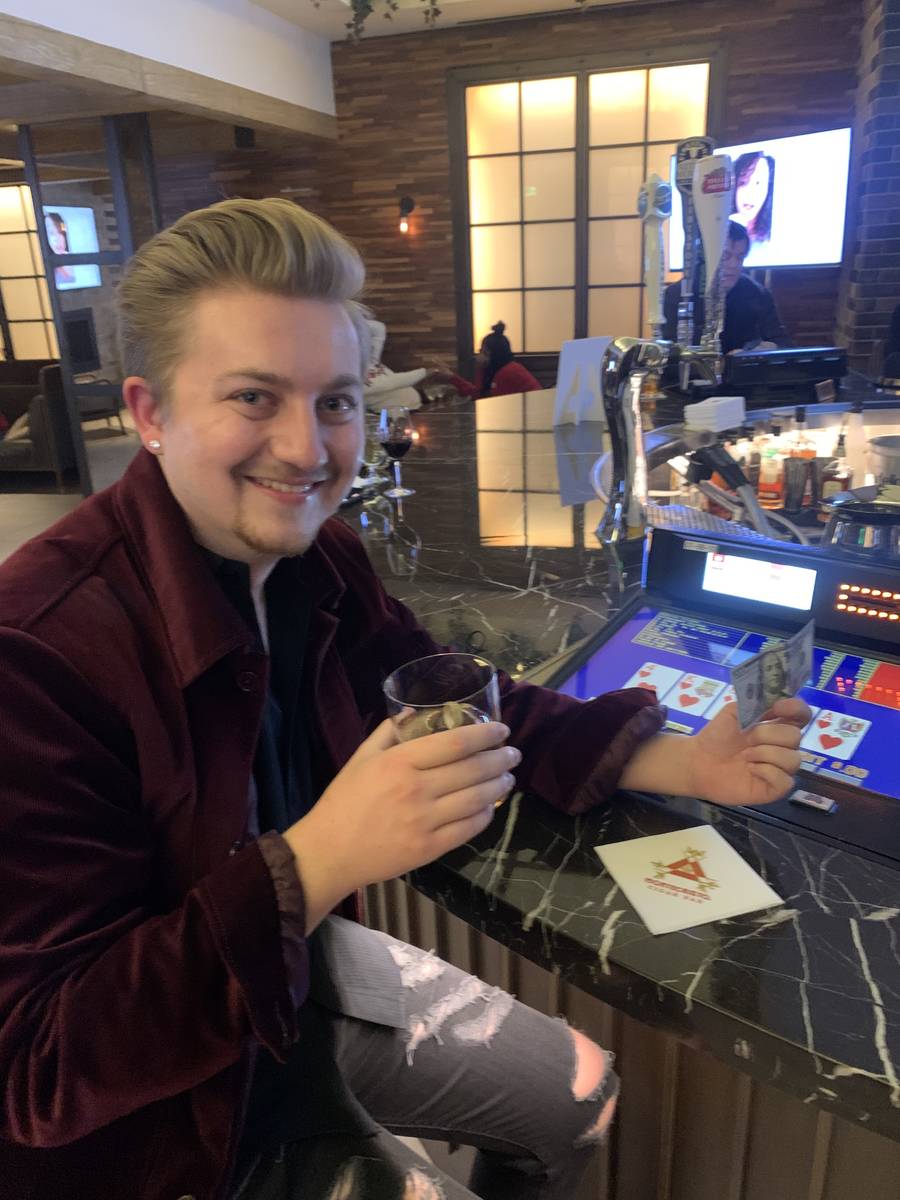 Cole Davis Duffy was supposed to be born on Elvis Presley’s birthday in 2000, which falls on Jan. 8.

As he says, “That would have been an even weirder coincidence.”

Weirder even than being born seconds after midnight on Jan. 1, 2000? As the first baby born in Vegas this century? To an actual Elvis Presley tribute artist, and to parents who co-own Graceland Wedding Chapel in downtown Las Vegas?

You make the call.

As it is, Duffy, who has grown up to be a talented musical-theater performer out of Las Vegas High School, is set to celebrate his 21st birthday at Caesars Palace. That’s the famed resort where his father, longtime Elvis impressionist Brendan Paul; and mother, Dee Dee Duffy, carted him for his first photo portraits about 14 hours after he was born at Sunrise Hospital.

So much to untangle with this one. Cole was born at 12:01 a.m., a little more than a week early, and is the first recorded birth in Clark County in 2000. Brendan has been performing as Elvis in Vegas since 1995, and he and Dee Dee bought the Graceland chapel in 2003.

The couple is divorced, but still remain close in business, with Brendan keeping busy performing ceremonies as Elvis, including 25 on New Year’s Eve day and night.

Oh, and Brendan’s birthday happens to be New Year’s Eve. He’s 54, having been born in 1966, the year Caesars Palace opened. That’s why the family visited that particular hotel for Cole’s first field trip, and again in the days before his 21st birthday.

“Some of these casinos come and go, but this one will be here his whole life,” Brendan said during a return visit to the resort for a full-costumed family portrait on Tuesday afternoon. “It’s a special place, and we took him here even before he went home.”

Cole’s birth was uncommon even beyond its specific date and time. Brendan had accepted a gig that night to perform (as Elvis, natch) at Sylvester Stallone’s New Year’s Eve party at his Beverly Hills mansion. The couple talked through all the possibilities of his absence on New Year’s Eve, so close to Cole’s due date.

“I took Brendan to the airport at noon, went home, laid down, then went to the bathroom and my water broke,” Dee Dee continued. “My mother was visiting me from Kentucky, and she was just a nervous wreck. We got my suitcase, got in the car, drove to the hospital.”

Dee Dee said she began having contractions just after being admitted. “But I wasn’t worried, because they said, ‘Don’t worry, it’s your first baby, it will be sometime tomorrow.’ ”

“It was seconds — seconds! — past midnight,” Dee Dee recalled. Her mother, Shirley, was on the phone with Brendan during the delivery and dropped the call, or rather the phone receiver, when the baby arrived.

“Dee Dee’s mom is going, “Oh my god! Look how cute!’ and we didn’t know the gender,” Brendan said, recalling a time before everyone had cell phones or hosted gender reveal parties. “Then I heard, ‘Oh how cute!’ And I’m going, ‘Hello, hello? Is it a boy or a girl or what?’ ”

Skeptics can question that the timing of this birth was meticulously planned, that the couple wanted to bring a baby into the world at exactly that time to generate publicity (especially for an Elvis impressionist in Vegas).

Dee Dee shook her head and laughed at that suggestion.

“Absolutely this was not planned,” she said. “No, no, no, I can feel the skepticism, but not at all. I had been trying a long time to get pregnant, and this is how it happened.”

Brendan used the check he earned from the Stallone gig to buy a gift for his new son, a black, Young Chang baby-grand piano.

“We thought he might be an entertainer someday,” Brendan said.

Cole is that, but learned the guitar over the keyboards. He’s also a promising singer, songwriter and actor who won a Nevada High School Musical Theater Award in 2018 for his portrayal of Eddie in “Dogfight.” Cole was nominated for the national award, known as the Jimmy Award, that year. He’s since enrolled at the top arts school Oklahoma City University, where he is a musical theater major.

He’s performed in “To Kill A Mockingbird,” among other titles, before COVID shifted the school’s emphasis to online performances. Cole is also working as a singing gondolier at The Venetian, so watch for him there, too.

Of course, the son of an Elvis impressionist has been asked if he’ll ever don the sequined jumpsuit himself.

“A lot of friends have asked me if I want to do it, and it’s not that I don’t want to do the Elvis thing, but I just want to expands my interests,” Cole said. “My dad feels the same way about it. I can’t lie, when I was younger, it was weird, like, ‘Why is my dad the one who is so special and the other dads are like firefighters?’ But now, I have grown to appreciate it.”

Cole said he was ready to enjoy his first cocktail, which was described to him as the Sean McBurney Manhattan, named for the Caesars Entertainment exec. He played some roulette just after midnight, not far from where he was shown in those birthday photos 21 years ago. His first bet was $50 on black, and he won (insiders report, anyway). He also bet on 26, which is his mom’s lucky number; and also on 7, a lucky number, generally.

The novice gambler will also put some money on black, but not a lot. “I don’t want to get too edgy,” he said.

The guy at the center off all these crazy coincidences seems to shrug off all the oddities.

“When I was a kid, I used to say, ‘Are all those fireworks for me? This is great!” Cole said. “But now it all just seems so surreal, like it doesn’t seem like it’s actually a thing.”

Maybe it’s all meant to be a musical, down the road, with the first 2000 Vegas baby as the star.