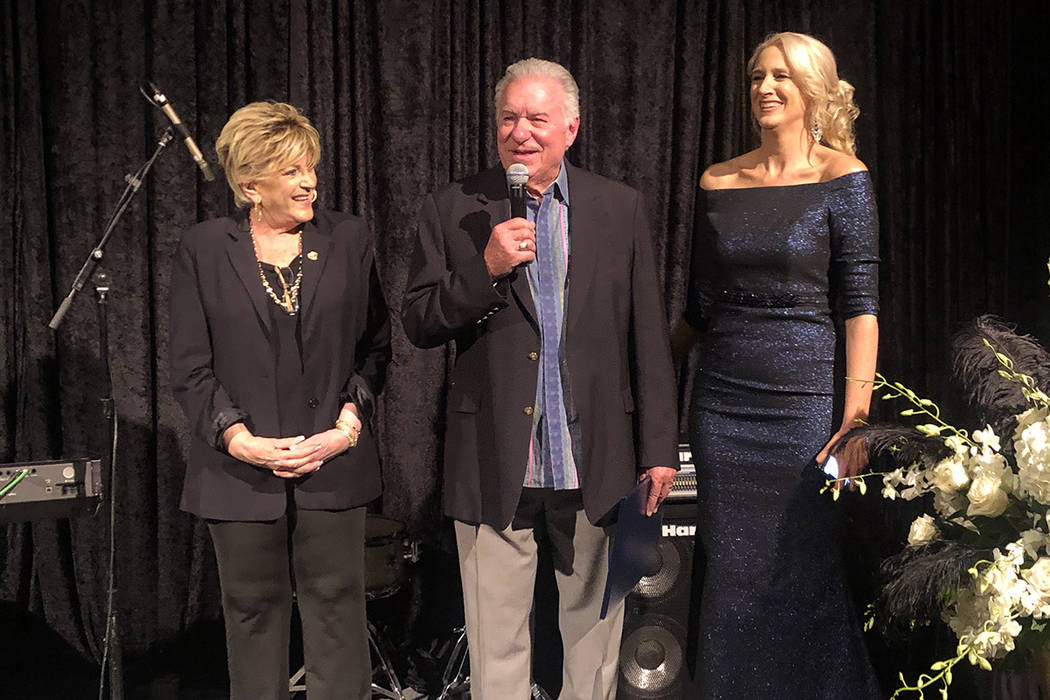 The Kats! Bureau at this writing is McCarran International Airport’s D Gates, my favorite Gates after Bill and Melinda. I’m flying out, and up, to Edinburgh Festival Fringe in Scotland, to check out the premiere of “Atomic Saloon Show,” the new Spiegelworld spectacle opening Sept. 8 at The Venetian’s Grand Canal Shoppes.

The Spiegelworld crew, led by founder Ross Mollison, are bubbling over with some very good early feedback about the show and a sellout in its first Saturday night performance. A review from the website CultureFix, which seems to be reviewing all of the major shows at Edinburgh, gave it five stars (out of five stars, which is as many stars allowed in a review).

The review remarked about “Atomic Saloon Show’s” raunchy humor and eye-popping acrobatics, and referred to a song title we can’t cite in a family publication.

Westgate Las Vegas marked its 50th anniversary Saturday night with a multitiered party starting with a cocktail reception, rolling into Ted Torres Martin’s Elvis tribute show (featuring the original Sweet Inspirations) and ending with a VIP event upstairs at the hotel’s Crown Room. The event cast a spotlight on someone who deserves it, hotel General Manager Cami Christensen.

I’ve known Christensen for about 15 years, since in the days when Ferengis were delivering dry-ice drinks at Quarks restaurant and “Menopause the Musical” was selling out Shimmer Cabaret. Christensen knows the hotel’s history, clientele and (especially) staff really well, having arrived at the L.V. Hilton some 18 years ago. She has parked cars (literally, for one shift) and hosted Bill Clinton, among scores of dignitaries, at the hotel.

Hotel owner David Siegel, who promoted Christensen to GM in October, joked during the cocktail reception, “I bought Cami, and the hotel came with her.” Christensen responded, “You couldn’t afford me.”

Christensen was also honored to welcome Las Vegas Mayor Carolyn Goodman to the cocktail reception, saying, “You have been such an inspiration to me,” and later recalling that moment and saying, “I am so humbled to be the president of this majestic place.”

The hotel honored the more than 53 employees who have been with the company for more than 40 years, topped by usher Angel Rosas, who was hired in March 1969 — three months before the hotel opened. Christensen said Rosas had seen 12,000 performances on the property; I’ve mentioned to him he’s led my to my seat in 6,000 of those shows.

Smartly attired in a tux, Rosas repeated Siegel’s wishes, “I say we do this again in 50 years.” Rosas worked Elvis’ opening in July 1969, and has always said the Presley shows “were like New Year’s Eve, every show.”

Torres Martin, an Orlando, Florida, artist who has performed as Elvis for 14 years, performed the seemingly unachievable — a full concert as Elvis actually made you feel as if you were watching the real thing. I’ve caught many ETAs (Elvis Tribute Artists) over the years, and many are good summoning Elvis’ spirit in short segments or in a smaller scale.

But Torres Martin had the moves down, was flawless vocally, and really warmed to the experience of performing on Elvis’ old International Theater stage.

And the Sweet Inspirations sounded great, as original member Estelle Brown simply demanded that the audience sing along to “The Lord’s Prayer.” I had expected the Inspirations, Elvis’ backing vocalists through his seven-year Vegas run, to sing just a couple of numbers during the anniversary show. But they backed Torres Martin for the entire performance. It’s moment we might not see again in VegasVille.

Such Vegas entertainers as Frankie Scinta, whose “Scintas” family act moved to Vegas in 2000 to headline the Shimmer; and Chris Phillips of Zowie Bowie (who drew the short straw as my plus-one) were in the mix. Tableside conversation was centered on the long list of headliners — Elvis, Wayne Newton and Liberace among many superstars — who graced the resort’s showroom.

At the post-party, members of the Westgate family — including Siegel’s wife, Jackie; and right-hand man, Mark Waltrip; and son Richard Siegel— mixed with headliners Jennifer Romas of “Sexxy” and magician Jen Kramer.

Romas, especially, has a history at the hotel, as part of Kristine W’s show at the Shimmer, and also “Monster Circus” rock production in the showroom. Siegel gave Romas the chance to realize her dream of producing her own show, at a time when nobody would have blamed him for shutting down or even imploding the property. It was fitting that Romas’ parents, Judi and John, were VIPs at Saturday’s party and show.

Christensen herself remarked at how dismal the hotel’s fortunes seemed in the days when it was LVH. For two years, the hotel was run by execs at Goldman Sachs, looking to sell the building as Christensen toured suitor after suitor around the hotel.

Today, Westgate is renovated and continuing to rebound. The Superbook, operated by the esteemed Jay Kornegay, has been impressively overhauled with a massive LED layout and food-and-beverage options. The IBar lounge, open at the entrance, stages live music regularly (Phillips himself is bringing an off-shoot show, a trio called “The Cocktail Beat” debuting Aug. 24).

The hotel is still planning to spend upward of $20 million to $30 million on more renovations, including LED screens at IBar.

Yep, video screens in the open lounge at the old Las Vegas Hilton. I’ll be there, and I’ll save a seat for my buddy Angel.

Expect a new ’80s-era medley of Van Halen, Motley Crue and Whitesnake. The band is also returning “Kashmir” by Led Zeppelin, and, as Di Gregorio says, “something cool from Queen.”

Di Gregorio and co-producer Brody Dolyniuk (and we go waaaay back to the days of the Railhead at Boulder Station) have assembled something of an empire with this act. Over weekend, the Femmes opened for Ted Nugent at the McHenry County Fair in Woodstock, Ill. About 5,500 fans turned out. I say that billing should have been flipped, but I’m biased …

Michelle to the J

Another column fave, jazz great Michelle Johnson, is back at Myron’s Cabaret Jazz at 8 p.m. Friday with “Salute To The Great Singer-Songwriters.” Jeffrey Neiman is back as Johnson’s music director, with Gret Menzies Gonzales, Jolana Sampson and Jassen Allen on backing vocals. Johnson is also premiering a new song, “I’m All In,” her first songwriting venture in many years.

“I started writing when I was a kid, a child,” says Johnson, commonly known as “Las Vegas’ First Lady of Jazz.” “Then I got away from it, and ‘I’m All In’ is about recapturing that spirit.”