The KATS! Bureau at this writing is Harrah’s Cabaret, sitting in on a read-through of a budding musical with a familiar title, “Menopause 2: Still Hot.”

This production for the ages has been workshopped, off and on, for about a year. The project is co-produced by Alan and Kathy Glist of Las Vegas and GFour Productions, the team behind the original “Menopause.”

The show is co-written by Vegas headliner Clint Holmes and accomplished comedy writer and composer Dennis Blair, who spent more than two years opening for the late George Carlin. Keith Thompson, having a busy 2018 already with his “The Cocktail Cabaret” production at Cleopatra’s Barge at Caesars Palace, is signed up as music director.

If Team Menopause realizes its vision, “Menopause 2” could well be the follow-up hit to the long-running “Menopause The Musical.” Glist is looking a fall premiere of the show at Troesh Studio Theater at The Smith Center (or, possibly in the winter), then shopping the title to theaters across the country.

The show would not compete in Las Vegas with the original. “Menopause The Musical” has proven a tireless comedy-musical, and celebrated its 13th anniversary Thursday night at Harrah’s. It opened at Shimmer Cabaret at Las Vegas Hilton in 2005, then moved to Luxor’s Atrium Theater in 2009 prior to moving to Harrah’s in 2015.

The sequel is still in its larval stages, but already reflects the campy humor that has reached a significant segment of Vegas tourists. Where the original “Menopause” employs broad humor (I think the show uses that line, actually), the sequel targets Las Vegas specifically with repeated references to our city.

One line, from a re-written Vegas classic, “There’s a guy peeing in the streets! That wasn’t in the brochure! Oh, Viva Las Vegas!”

Stage malfunctions have forced the temporary cancellation of “Ka” at MGM Grand.

“Our production team is evaluating the issues right now and hope to know when the show will return as soon as possible,” said a statement released Friday by the company.

The first performance of Wednesday’s show was cut short because of problems with the main stage. The second show that night was canceled entirely. Saturday and Sunday’s shows have also been canceled, and no reopening date has been set.

“Ka” was the site of the June 29, 2013 death of French acrobat Sarah Guillot-Guyard, whose harness slipped free during the Final Battle scene, causing her to fall some 95 feet from the show’s rotating stage into the pit.

Former Nevada Lt. Gov. Lonnie Hammargren, the retired neurosurgeon and legendary pack rat of vintage Vegas artifacts, is the latest to be honored with a shrunken head at The Golden Tiki. Hammargren was feted Thursday night, which also marked the birthday of the late Don The Beachcomber (legal name Ernest Raymond Beaumont Gantt), widely credited as the father of the tiki bar.

The event was a surprise party for Hammagren, who said, “I just thought we were going out for a drink, It was a total surprise to be included in the shrunken head collection, and it means the world to me.”

Jennifer Lopez and a party of 30 celebrated the 10th birthday of her fraternal twin children, Max and Emme, on Thursday at Sugar Factory at the Fashion Show mall. Among the Wonka-esque treats were goblets filled with jelly beans and edible gumdrop centerpieces.

Former Las Vegas Mayor Oscar Goodman hosted his latest dinner series talk Thursday at Oscar’s Beef Booze & Broads at Plaza. He was in full flourish from the start, reminding the diners in the restaurant’s speakeasy room, “When I was mayor, I had a rule: Don’t call me after 5 o’clock. I’ll sound lucid, but I won’t remember a word I say.”

He also teased my mom in the audience about schlepping in from New Mexico, though she’s actually from Idaho. No matter. Goodman kept the room animated for his 30-minute talk, introducing a friend of his you’ll be hearing a lot more of by the summer: Former Colombo crime family overlord Michael “Yuppie Don” Franzese.

Reformed from his legitimately dangerous days as an organized crime figure, Franzese today is a born-again Christian and a popular motivational speaker. He’s been spotted around the property quite often over the past several days. As he tweeted, “The Plaza is a great property downtown. And a BIG surprise heading there this spring. Stay tuned!” Those who have been following this column can put it all together.

My friend Michelle Johnson is back at Myron’s Cabaret Jazz on March 2. Known as Las Vegas’s First Lady of Jazz, Johnson returns with “Spotlight: The Music of the Icons,” singing the songs of Paul McCartney, Gladys Knight, Barbra Streisand, Sheena Easton, David Cassidy, Wynonna and others. Johnson has performed alongside all of those icons. 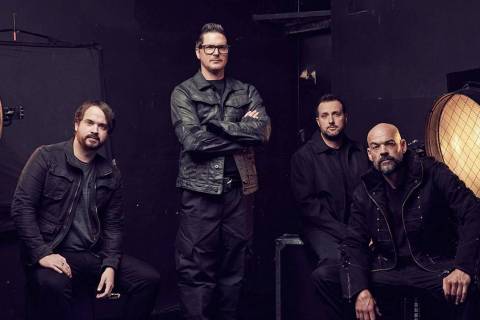 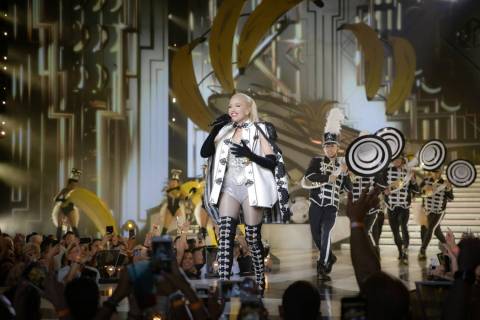 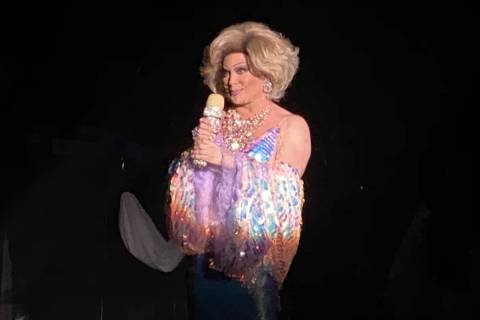 Drag icon Frank Marino says of his short, black skirt, “I found this in the closet, next to Ryan Seacrest.” 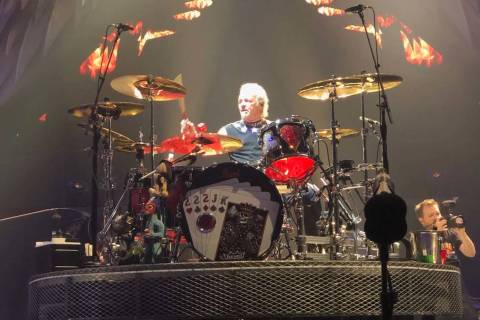 Joey Kramer, an original member of Aerosmitih, returned Monday after a seven-month absence from the “Deuces Are Wild” residency at Park Theater.