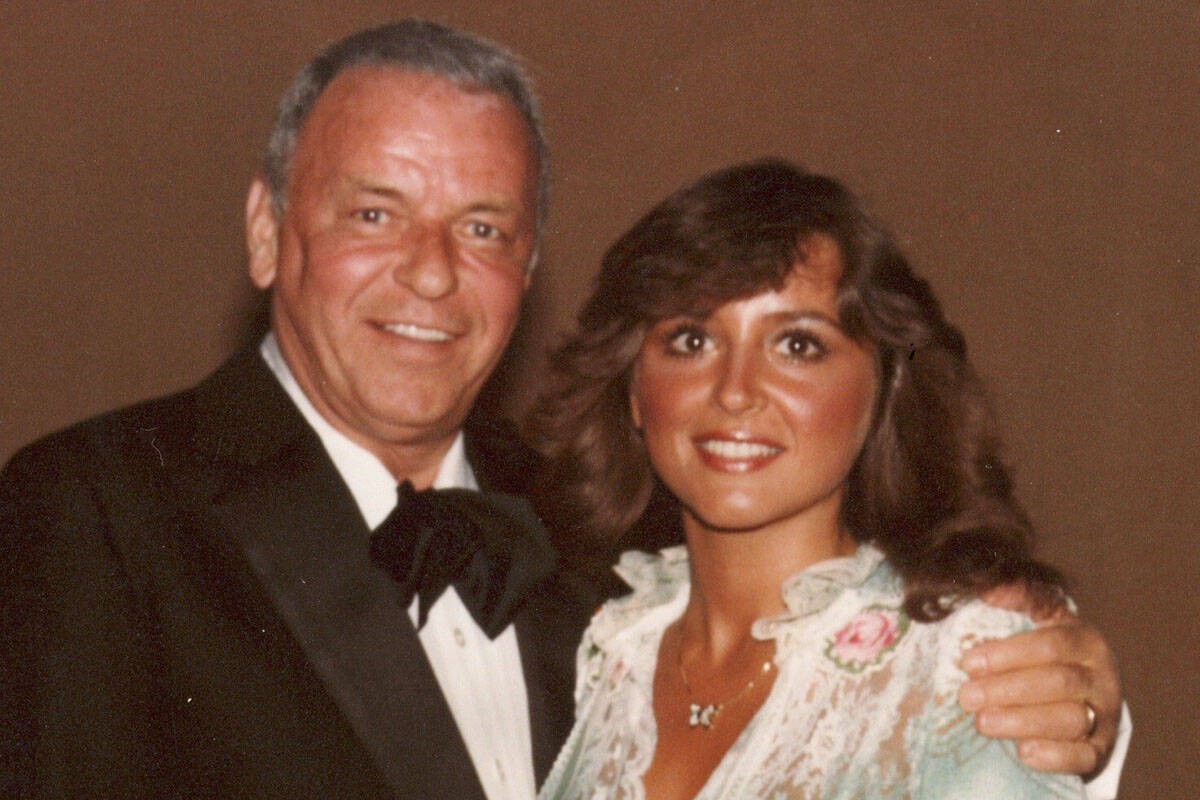 Marlene Ricci is shown with Frank Sinatra in her days opening for the entertainment legend. (Marlene Ricci) 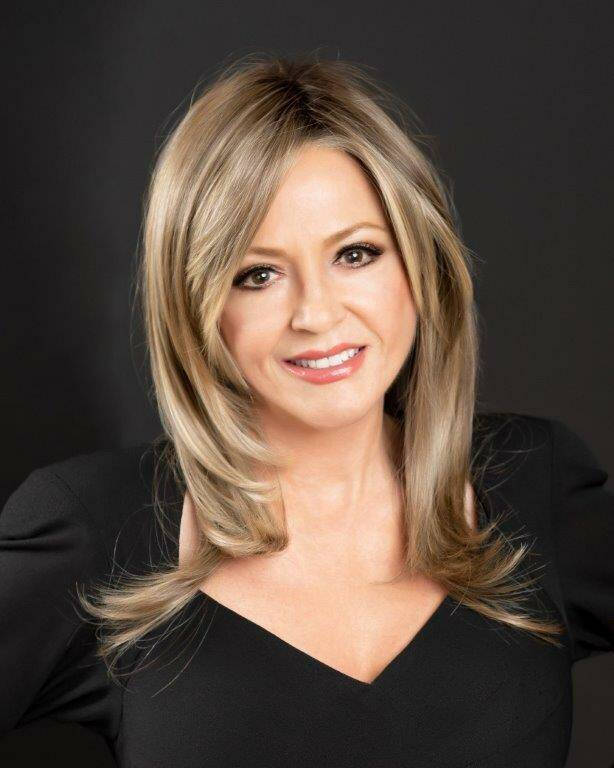 Vegas entertainer Marlene Ricci, is shown at at the Riviera Hotel Casino in this undated file photo. (Review-Journal) 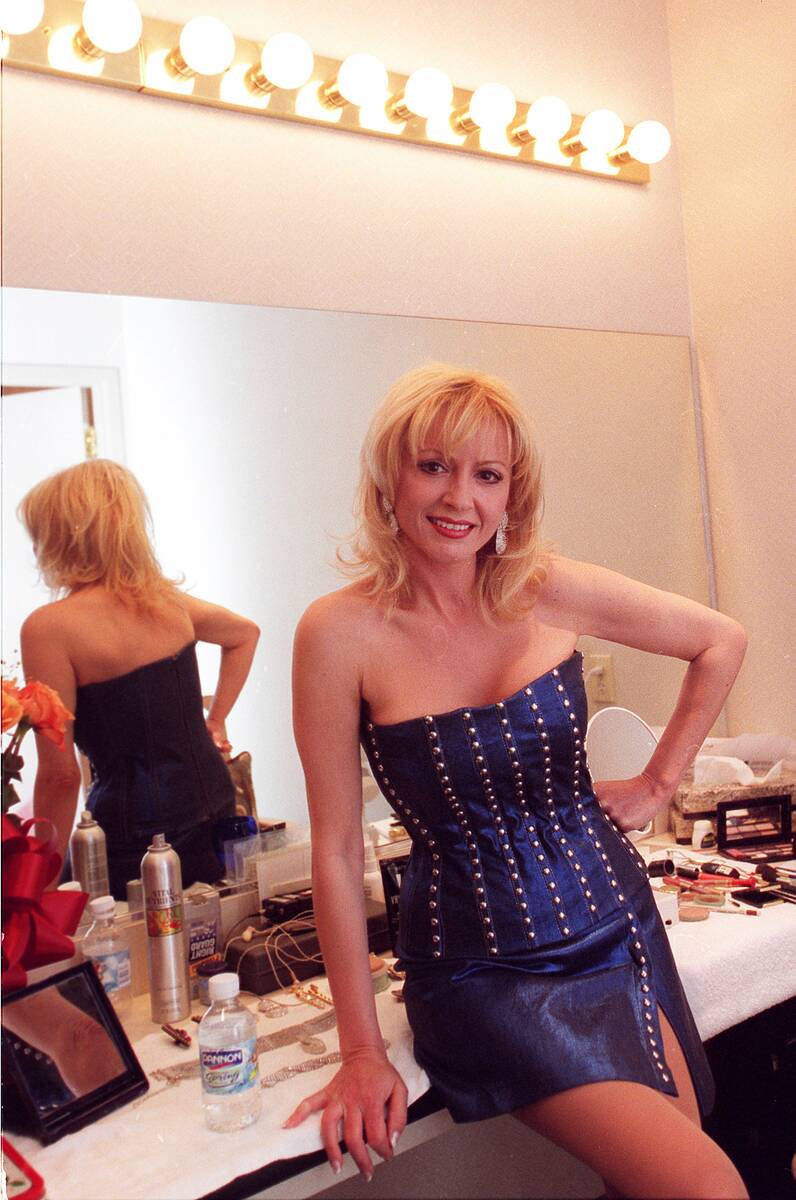 Vegas entertainer Marlene Ricci is shown at at the Riviera Hotel Casino in this undated file photo. (Review-Journal) 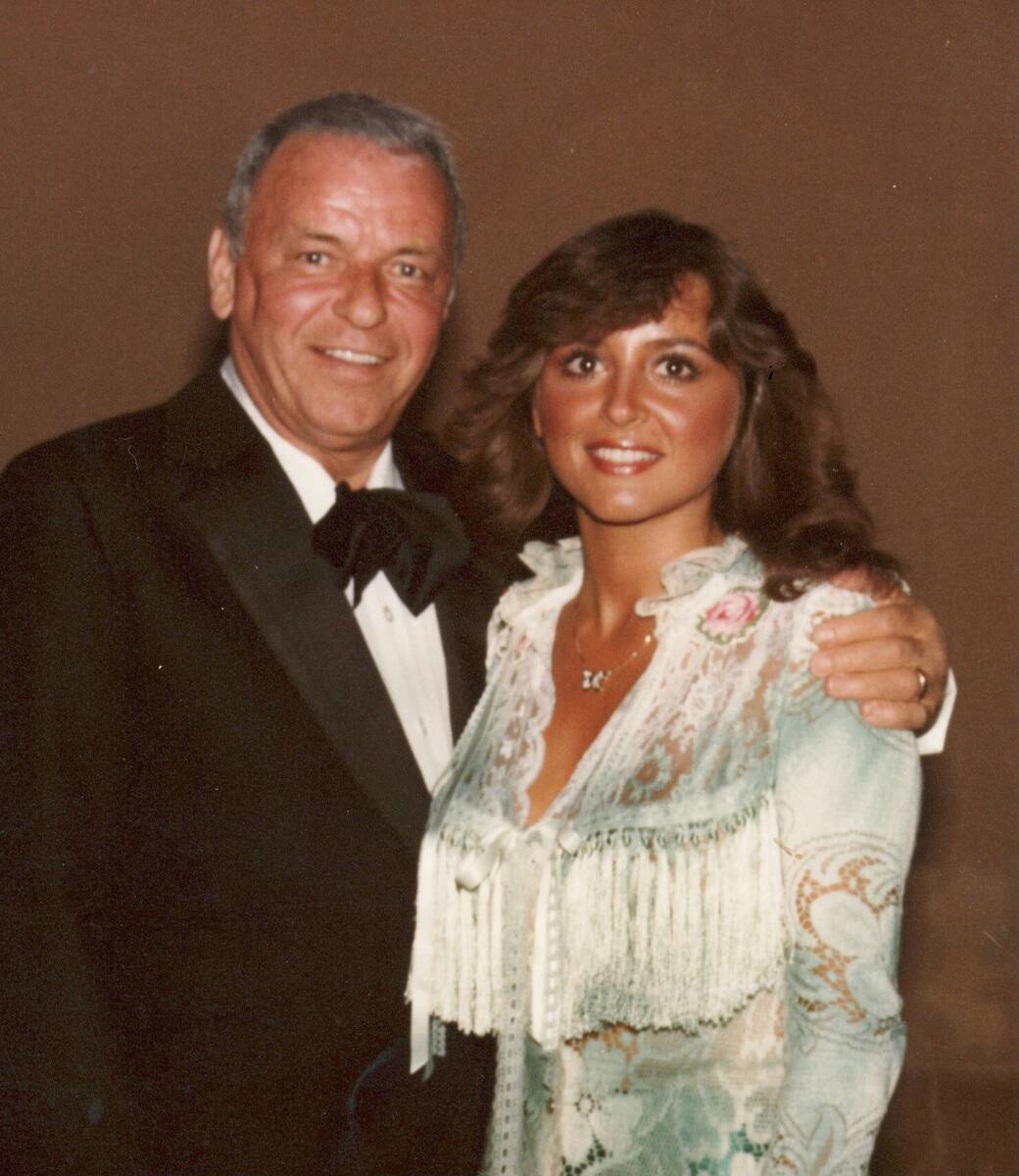 Marlene Ricci is shown with Frank Sinatra in her days opening for the entertainment legend. (Marlene Ricci)

The song is “Luck Be a Lady,” and Marlene Ricci is one lucky lady.

Ricci has drafted a storybook career from a break in 1975. Her meeting with Frank Sinatra at the lounge at the Aladdin hotel-casino is the stuff of Vegas legend.

Sinatra had heard about this amazing young singer. After repeated messages that he and his entourage would be rolling in, he finally followed through to catch Ricci’s set.

Afterward, the legendary Chairman of the Board invited her to his table. He was with his wife, Barbara; his famed right-hand man Jilly Rizzo; and such superstars of the day as Danny Thomas and Angie Dickinson.

“I got this call in my dressing room, just before I went on, and they said ‘The Old Man’ was coming in,” Ricci says during a lunch at Bahama Breeze in Las Vegas. “I said, ‘Yeah, right,’ and I hung up on them. This was like the fourth or fifth time it happened. But when I got out there, during the second song, I see this whole commotion in the right corner of the room. He had like 18 people with him.”

Sinatra simply said, “Sit down. I would like you to go on tour with me.” Stunned, Ricci said, “Wow, this was my audition! Yes!”

A Buffalo native, Ricci still lives in Vegas. Thursday is her debut at Italian American Club (doors at 6 p.m., dinner 6:30-7:30 p.m., show at 8 p.m., go to iacvegas.com for the details). The IAC was once Sinatra’s jam. His signed letter from 1960, applauding the club’s opening, still hangs on a wall. A statue of Old Blue Eyes is in the back. He’ll be watching, once again.

“We’re just going in to do the show and tell some of my story,” Ricci says. The great Dave Loeb is music director and on keys. Keith Nelson on bass, Dave Collup on drums, Bill Jenkins on guitar, Patrick Hogan on keyboard and stings, Ivie Turner on violin, and Dolly Coulter and Jessica Marciel on backing vocals.

Ricci toured regularly with Sinatra for three years. She made it to network TV in 1978, cast as the lead in “Cinderella at The Palace” from Caesars Palace’s fabled Circus Maximus showroom. Sinatra had originally agreed to play the fairy godfather, but relented (mostly because of production delays) and the role went to Paul Anka.

In the face of speculation Sinatra might have engineered her taking the lead role, Ricci says, “They had these auditions for hundreds of girls, and it came down to me and one other girl, and I won the role.” Ricci also happened to have charts for music to be used in the show, a huge benefit that saved thousands of dollars.

The show was aired again in 1979, and was the first network taping ever at the hotel. The event’s impact on Ricci’s career was multifold. It effectively halted her recording ambitions at the time (she was about to sign a deal with RCA). She instead became a sought-after live performer.

“After that, I started opening for Don Rickles, George Burns,” Ricci says. “They would really just pick up a phone say, ‘We’re gonna put Marlene on this show,’ and it would happen. It was like it was just so easy.”

Ricci also went on to open for the likes of Flip Wilson, the Village People, Alan King and Bob Hope. She held a residency at the Top of The Dunes and played Le Bistro Theater at the Riviera, and was cast in the Rockettes Vegas stage show, “The Great Radio City Spectacular” in the late-1990s through 2000. She has been a working entertainer throughout, touring the country and performing private and corporate gigs.

It’s fun, but Ricci says it can’t compare to those days with Sinatra. “It’s been quite a ride,” she says. “The highs have been very high.”

We are confident the Garth Brooks residency at the Colosseum at Caesars Palace will open in the spring. Check back for such details as onsale dates, show times, and fashion tips …

That person with the oversized white specs and mod hairstyle who looked like Anderson .Paak spinning at El Dorado Cantina, was.

This was Monday night at the courtyard at El Dorado’s Tivoli Village location. .Paak is a friend and fan of the restaurant. .Paak contacted the ownership team on Sunday night, wanting to work out his DJ skills.

.Paak has recently closed Silk Sonic’s residency with Bruno Mars at Dolby Live. His handle behind the turntables is DJ Pee Wee. If you see that artist booked, it’s likely the man friends call “Andy.”

Fantasy at Luxor celebrates its 23rd anniversary Tuesday. Producer Anita Mann continues to amaze. Her name came up in a Zoom chat with Adam Lambert on Tuesday (because I brought it up). Lambert brings his “Witch Hunt” to Encore Theater on Oct. 26 and 28-29.

Mann directed Lambert in his first professional job as a member of the Holland America entertainment cast. The troupe performed productions on the cruise line. Lambert was 18.

“It was the first time he sang and danced onstage,” Mann said Wednesday. “He said, ‘You’re making me dance, too!’ But it worked out and he was wonderful.”

Drag superstar ADA VOX will be special guest at “Faaabulous! The Show” at Notoriety Live at 9 p.m. Thursday.

VOX has pulled the odd contestant-show combo, having been a contestant on “American Idol” and Queens of the Universe.” VOX was the first drag performer to advance to the “Idol” finals. Conceived and hosted by ex-“Zumanity” star Edie, “Faaabulous” is the only all-live singing drag production in VegasVille.

Gloria Dea, the city’s pre-eminent centenarian magician, is to be honored by the UNLV College of Fine Arts Hall of Fame on March 21. The ceremony is at the Student Union Ballroom. We told Dea’s story in August, as she celebrated her 100th birthday. She is the first magician to ever perform in Las Vegas, at El Rancho Vegas in It is a reappearing act for the ages.

A two-fer from one of the great guys and tireless talents in our community, David Tatlock and the Soul Juice Band. The muscular horn band is at Chrome at Santa Fe Station from 7 p.m.-9:15 p.m. Thursday. Friday it’s 8 p.m.-11 p.m. at Sunset Station. Dial up the funk for no cover, whatsoever.