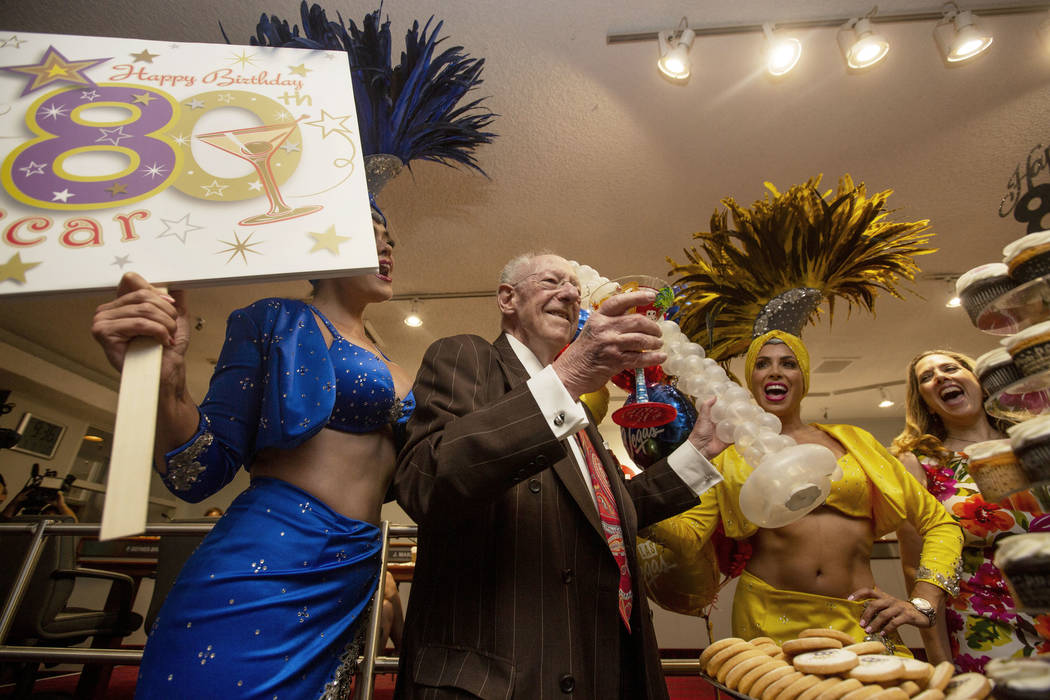 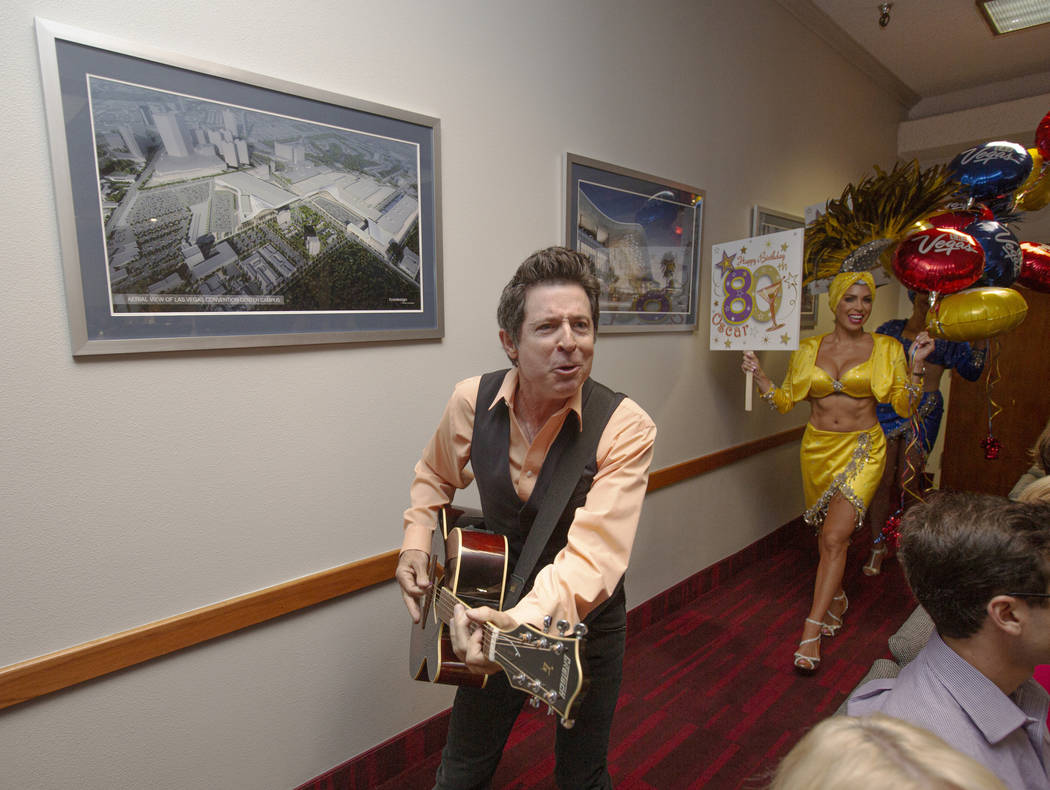 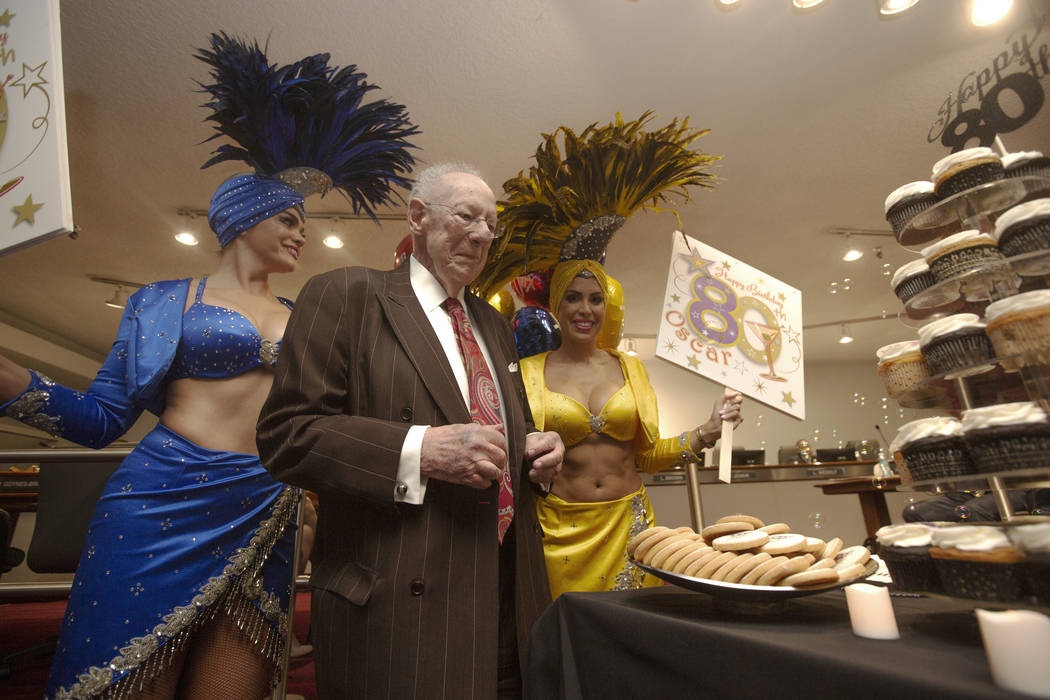 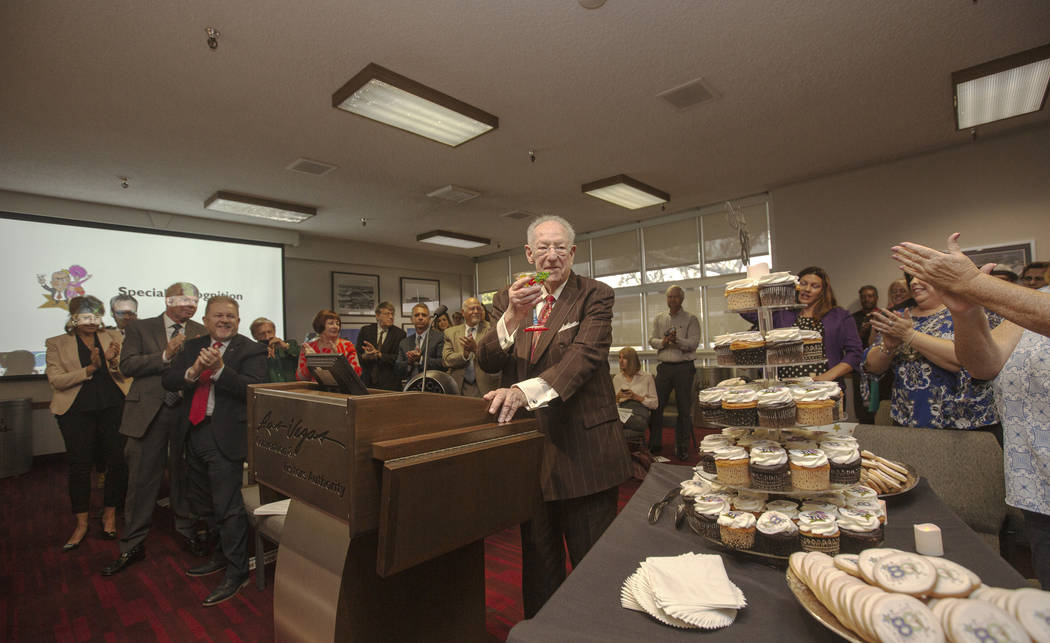 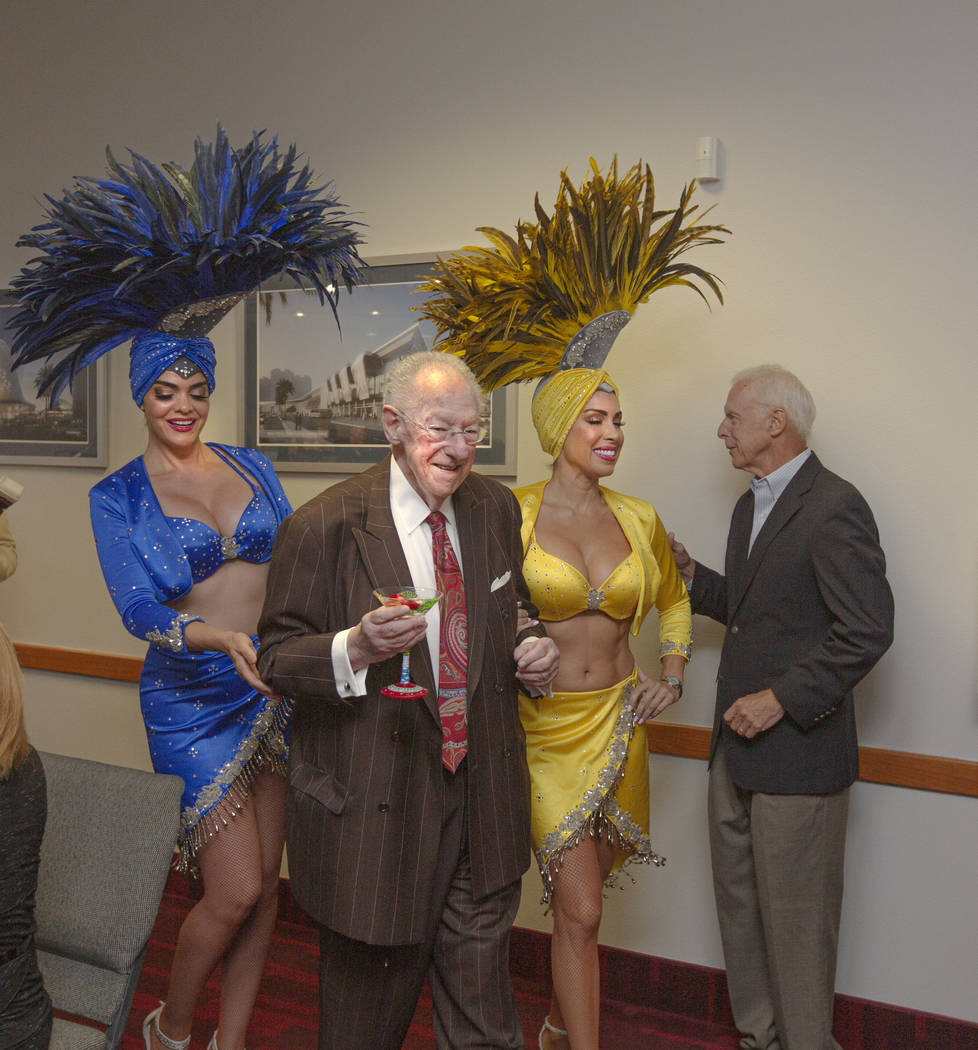 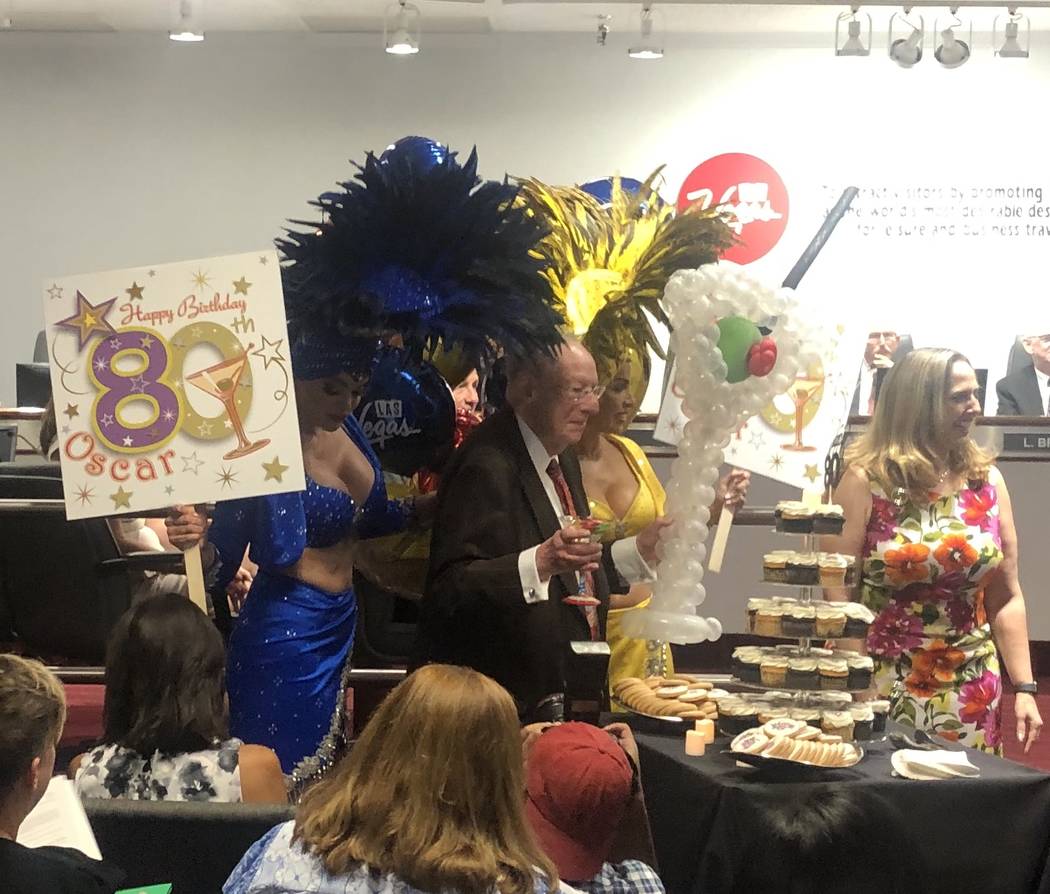 Former Las Vegas Mayor Oscar Goodman is surprised in a celebration of his 80th birthday at the Las Vegas Convention and Visitors Authority board meeting on Tuesday, July 9, 2019. (John Katsilometes/Las Vegas Review-Journal) @JohnnyKats 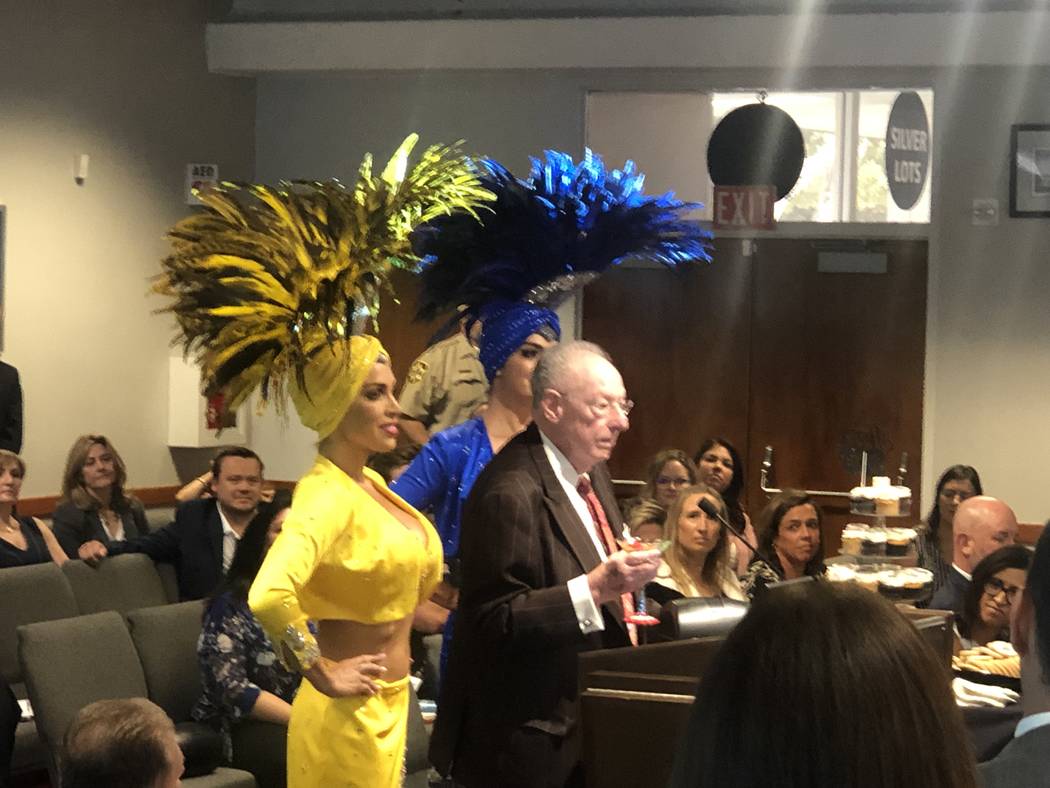 Former Las Vegas Mayor Oscar Goodman is shown with his famed showgirls as he is surprised in a celebration of his 80th birthday at the Las Vegas Convention and Visitors Authority board meeting on Tuesday, July 9, 2019. (John Katsilometes/Las Vegas Review-Journal) @JohnnyKats

We could joke that, for Oscar Goodman, an 80-martini salute is a good start.

But no, the former mayor of Las Vegas is being celebrated appropriately for his 80th birthday. An 80-martini salute and street party is set for 6 p.m. (doors at 5 p.m.) July 18 at Main Street Stage at Fremont Street Experience.

A total of 80 bartenders have been recruited through the United States Bartenders’ Guild Las Vegas Chapter, pouring Goodman’s famous gin brand of choice, Bombay Sapphire. Master Las Vegas showman Frankie Scinta hosts; tickets are a $20 donation to Keep Memory Alive, the nonprofit organization that supports the Cleveland Clinic Lou Ruvo Center for Brain Health (go to www.keepmemoryalive.org/goodman80th for info). The event is for ages 21 and older.

Goodman’s actual birthday is July 26. On Monday, Goodman — the ex-mayor and iconic “mob attorney” — was not totally informed about the event, but was set for a meeting with organizer on Tuesday afternoon.

This: Great surprise for @OscarBGoodmanLV marking his 80th birthday @LVCVA board meeting … pic.twitter.com/vODrWIh8qq

“I have no idea what’s going on,” Goodman said in a phone chat. “Everybody seems to know about it except the honoree.”

Goodman was further left out of the planning for another birthday celebration, Tuesday morning at the Las Vegas Convention and Visitors Authority board meeting at Las Vegas Convention Center. Goodman, the LVCVA’s Host Committee chairman since leaving office in 2011, was to address the board to recognize unsung Las Vegas “hospitality heroes.”

Goodman began to speak, telling board member and Clark County Commissioner Larry Brown to stand by. “I can’t find my notes,” Goodman said. “Where are they?”

“You’re not here to talk about hospitality heroes,” Brown said, to laughter. “You’re here to be recognized.”

Within moments, a singer performing “Birthday,” the ever-present showgirls and a tower of cupcakes topped by a gold “80” balloon display rolled into the boardroom.

“I’m surprised!” Goodman said. “And I am never surprised.” He sipped from a provided martini and said, “I’m sure I’m breaking some law here.”

Goodman can expect added surprises at the July 18 event. After the martini event, the party continues, post-toast, at Oscar’s Steakhouse at the Plaza. A prix fix “What Oscar Eats” three-course dinner is offered for $80 per person from July 18-26, with a portion of the tab also going to KMA (call 702-386-7227 for reservations).

Live music is planned for the birthday event, with the requisite showgirl models in the mix and a “special surprise” to close the evening. Just don’t tell the honoree.