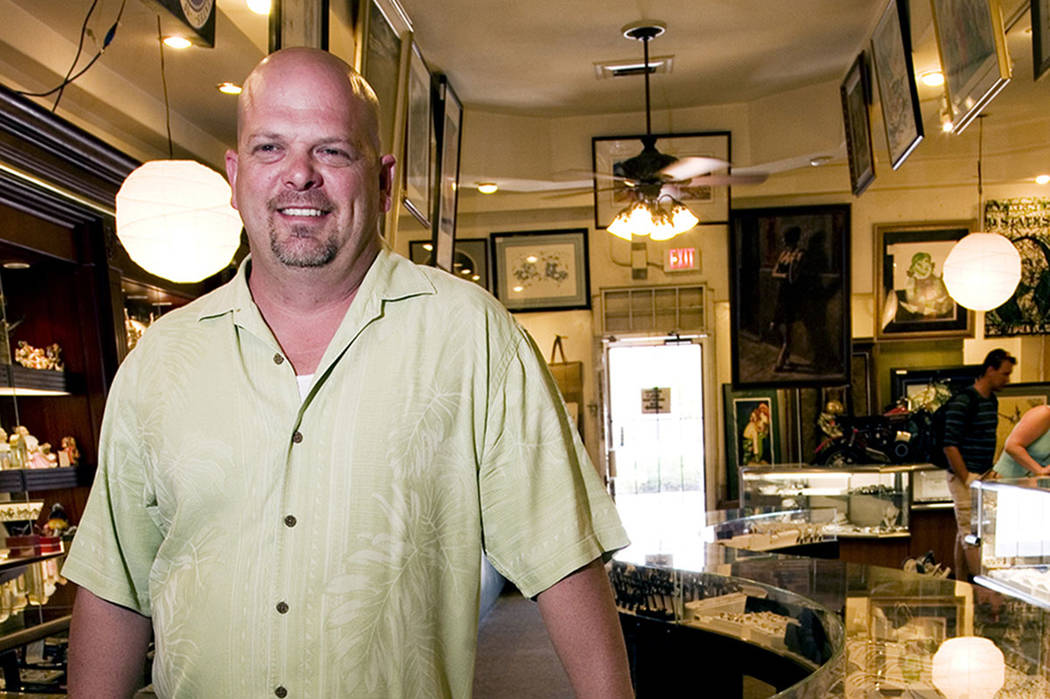 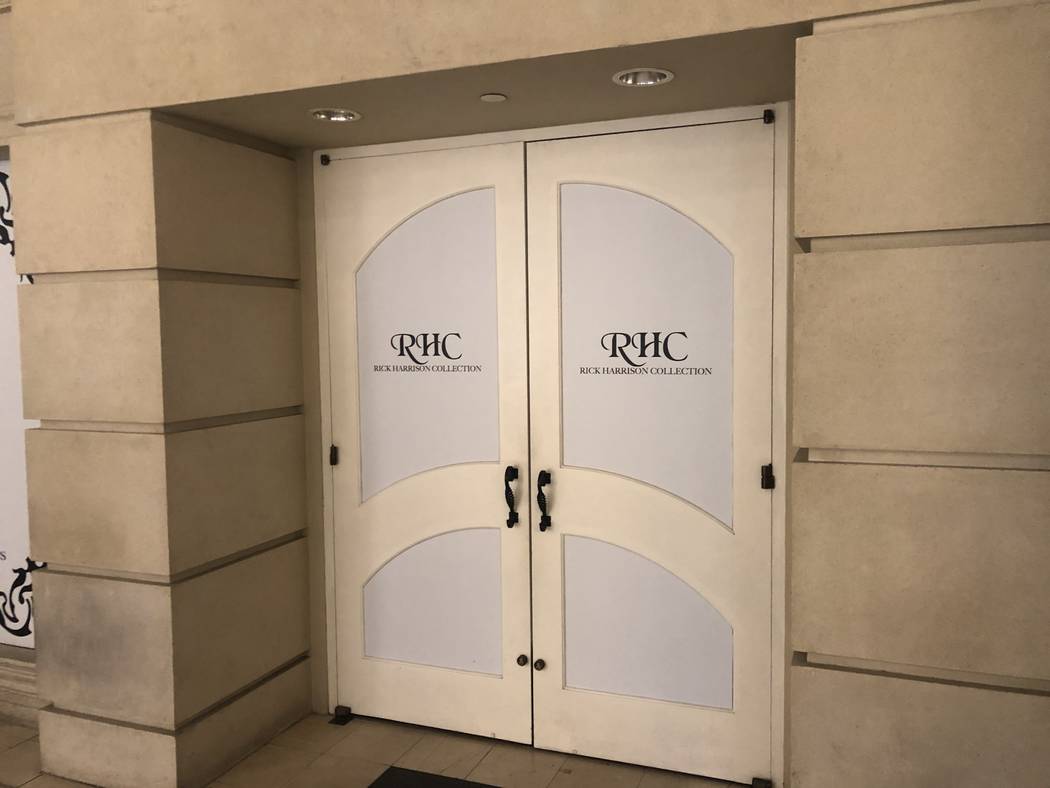 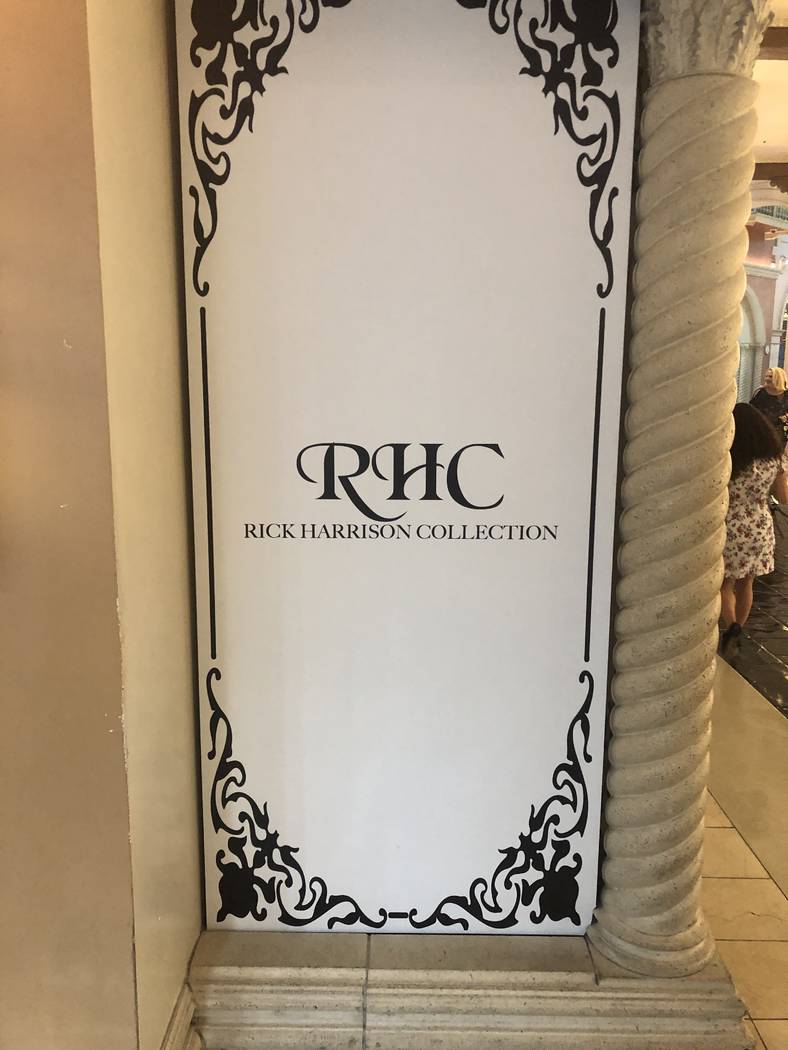 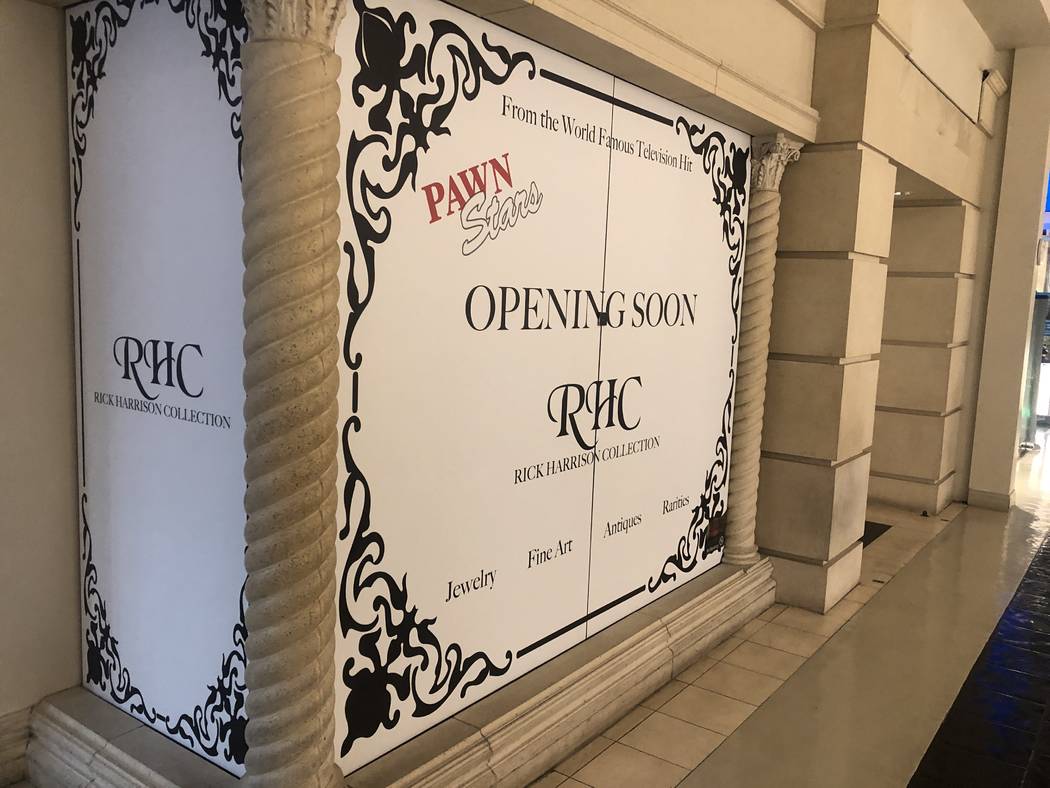 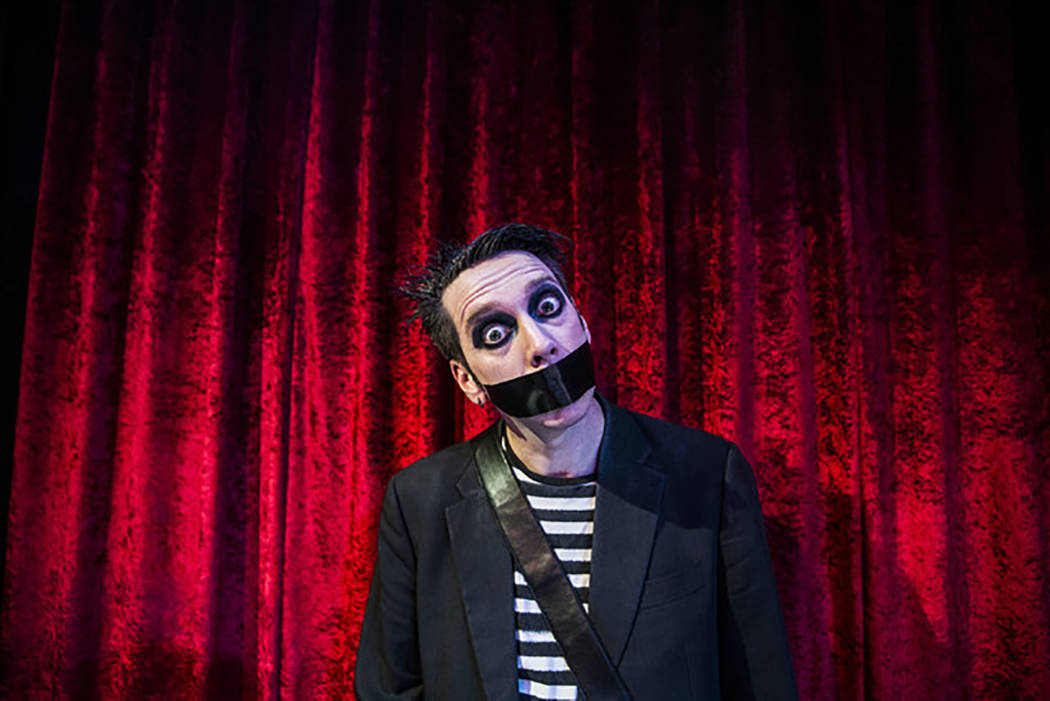 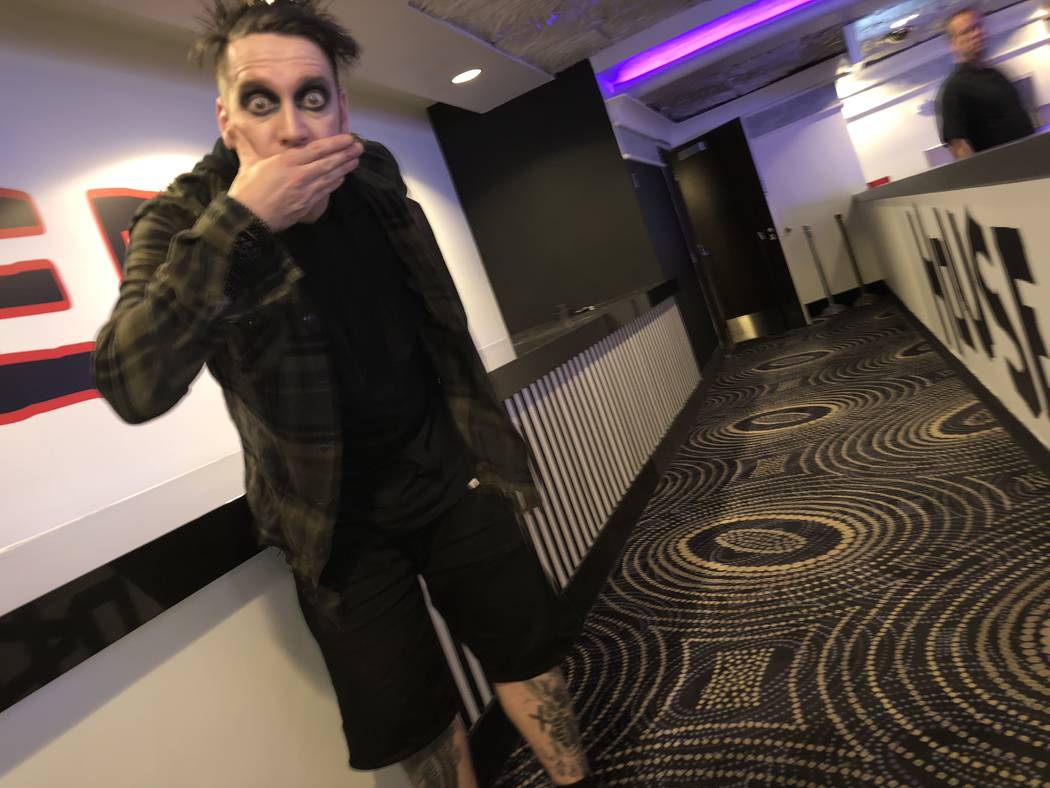 Tape Face is shown at the entrance of the House of Tape on Wednesday, March 14, 2018 (John Katsilometes/Las Vegas Review-Journal) @JohnnyKats 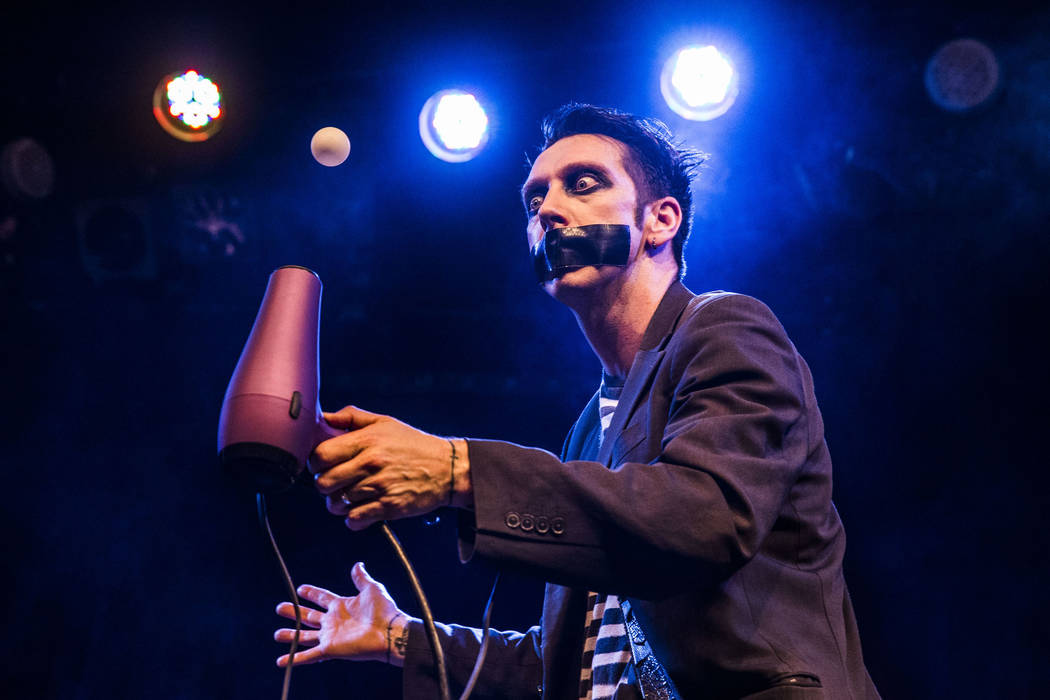 The Kats! Bureau at this writing is Grand Lux Cafe just outside Palazzo Theatre. I used to catch cast members of “Baz” in this area. No more. This beautiful venue has been dark for nearly a year since that show bowed out last July 29.

But we do see some renovation upstairs at Grand Canal Shoppes, especially if you take a gondola to the Art of Shaving and make a right down the walkway. That’s how you will find Rick’s Collection at the Grand Canal Shoppes. The new retail outlet from “Pawn Stars” co-star Rick Harrison began construction last Monday.

The actual location is between The Source Electronics store and Signature Galleries, across from Brighton Collectibles. The business is the first Strip offshoot of Harrison’s Gold & Silver Pawn Shop – the setting for “Pawn Stars” over the past decade. Friday is the show’s 10th anniversary on History.

Word from Harrison’s camp is Rick’s Collection will be open late August/early September. This is not a traditional pawn shop, but a place where you can buy some of Harrison’s favorite items from the TV series. The items will include jewelry, antiquities, rare rock ‘n’ roll and sports memorabilia, art and firearms.

Initially, Harrison had planned to open the store at the retail center Pawn Plaza next to Gold & Silver Pawn Shop and call it Rick’s Picks. He moved off the plan to take his collection, and brand, to an untapped clientele.

“We’ll have a whole new audience at The Venetian,” he said in March. “Those tourists might have never even seen the store.”

More pertinent is Wills is advancing his plans to create a string of Tape Face performers, aside from himself, to carry the show on tour and also perform on the Strip.

“It has always been our plan to evolve and grow the character,” Wills, a former contestant on “America’s Got Talent” and the show’s “Champions” series, said after Saturday’s show. “This has been done in many shows before. Las Vegas is one of the places you can do this because it is common — you have The Gazillionaire in ‘Absinthe’ and others who are played by multiple artists.”

Wills started using a swing performer in December, but remains the authority and final call on any act used in the show. A Tape Face performer can’t just start juggling pie tins as part of the show unless Wills says it is OK.

“We need to keep consistency in the act,” Wills said. “If someone wants to come to me with something new, we’ll talk about it, but the act has to keep its structure.”

The multiple-actor approach is risky in what is essentially a one-man performance. Imagine if Piff the Magic Dragon’s John van der Put started using subs. There would inevitably be some short-term confusion.

But the strategy is not new, and is similar to how Blue Man Group began in 1987 as a three-man performance-art team of Chris Wink, Matt Goldman and Phil Stanton. Over the years the troupe has expanded into an international touring company with many Blue Men playing the roles (the company has even developed a YouTube series about its training camp).

Aside from The Gazillionaire, “Absinthe” has employed multiple artists to portray Wanda Widdles and the Green Fairy. Rob the Robot and Dusty Moonboots of “Opium” have also been played by multiple actors. Even the seemingly indefatigable Enoch Augustus Scott takes a spell from his central character in “Zombie Burlesque” at V Theater at Miracle Mile Shops.

Reckless in Vegas, or Reckless at Access Showroom at Aliante. Michael Shapiro’s retro-fashioned band nearly sold the place out Saturday night, with about 500 in house for its largest ticketed Vegas show in its four years in town. The three-man act performs rock versions of such Las Vegas-tinged classics as “Luck Be a Lady,” “It’s Not Unusual/Miserlou,” and “Everybody Loves Somebody.”

Saturday’s show was boosted by guest stars Vinny “Vin A.” Adinolfi of Bronx Wanderers, Valerie Witherspoon of “Friends! The Musical Parody” at the D Las Vegas, and Vegas vocalists Toscha Comeaux and Michael Ross Nugent. Shapiro has booked the band at Italian American Club and Myron’s Cabaret Jazz and is otherwise on a serious venue hunt for a Vegas residency (aren’t we all?). Check back for updates, and catch them when and where you can.