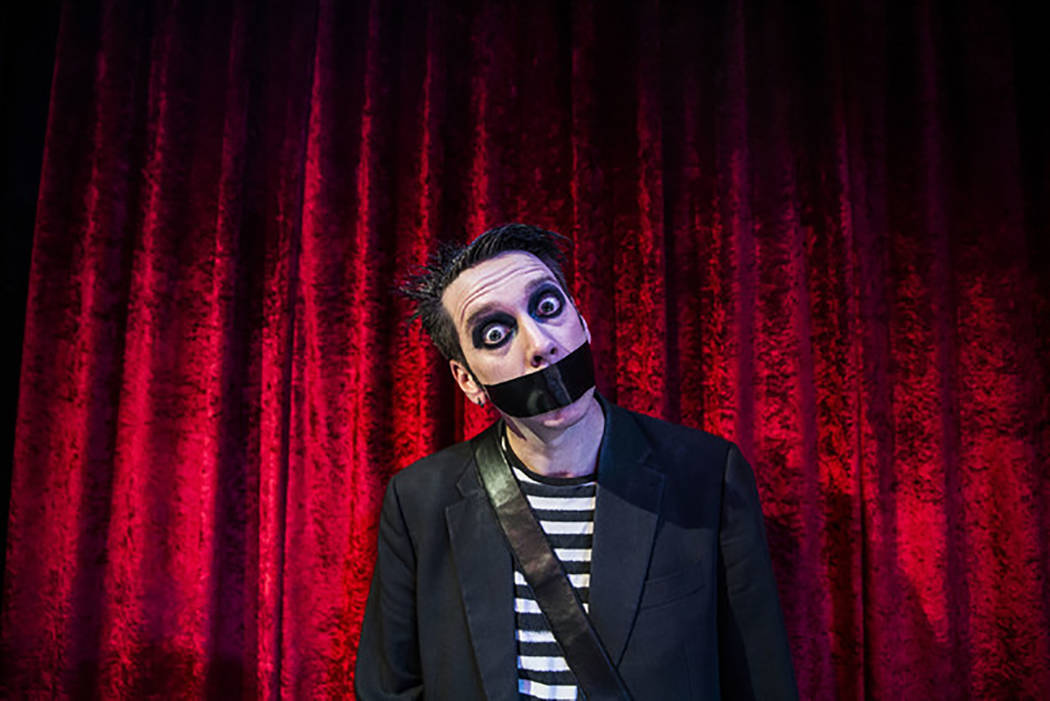 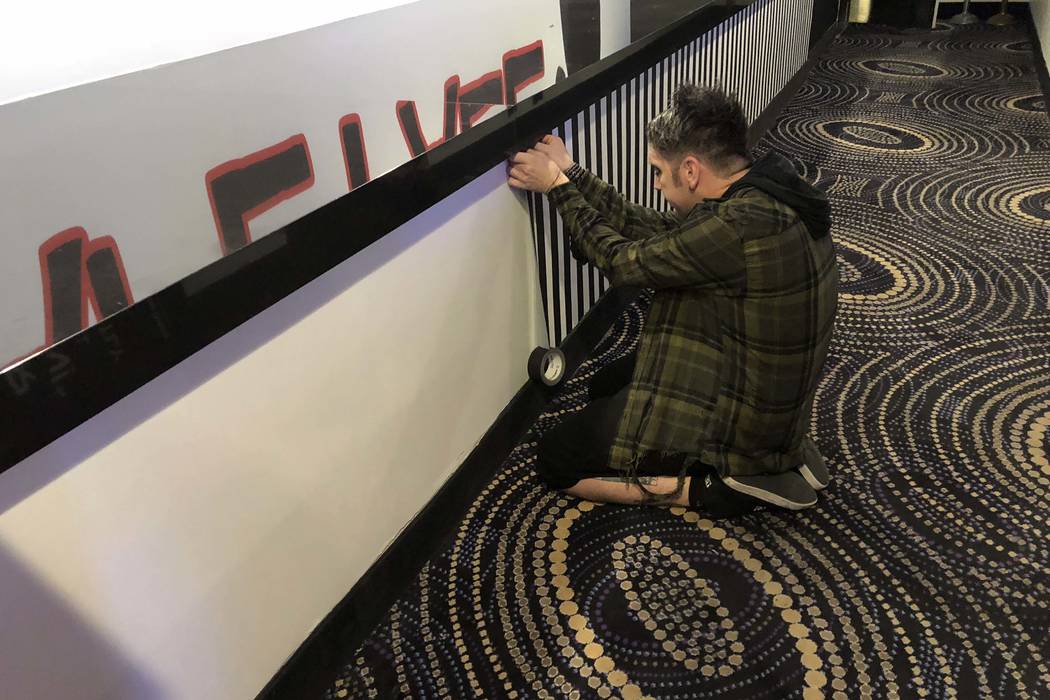 Tape Face is shown performing some taping at the entrance of the House of Tape on Wednesday, March 14, 2018 (John Katsilometes/Las Vegas Review-Journal) @JohnnyKats 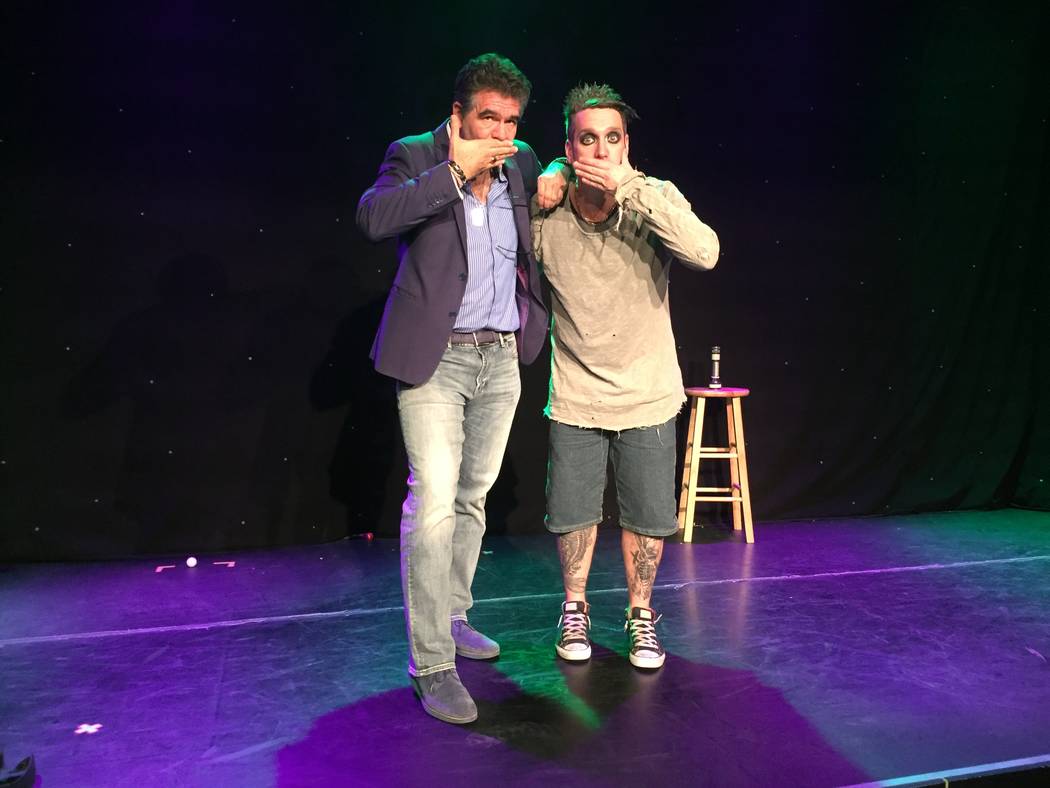 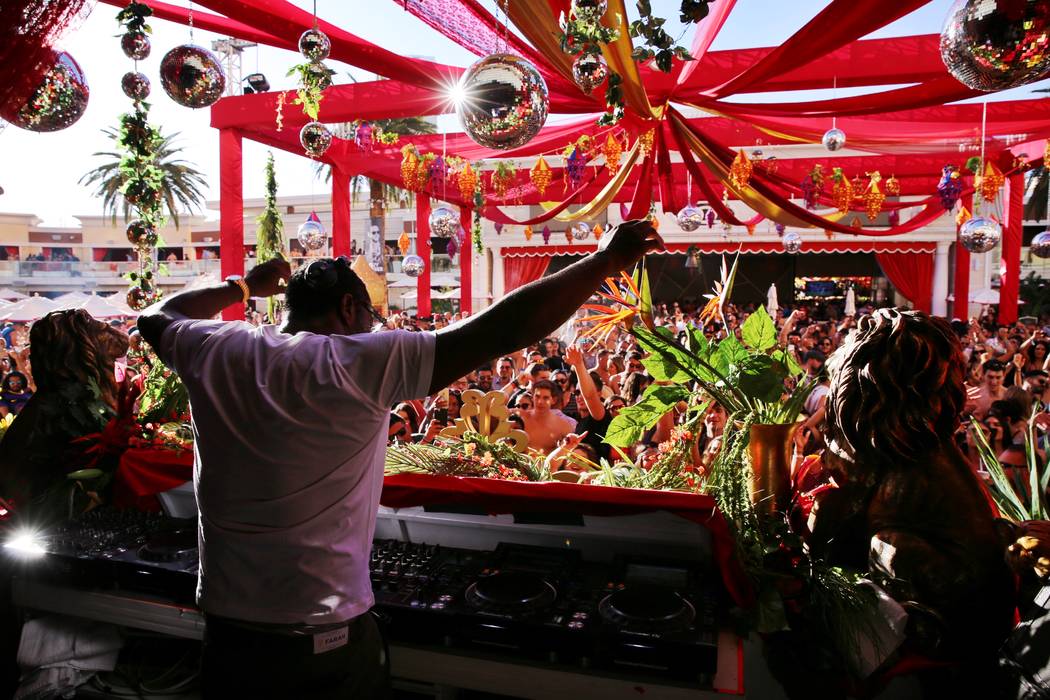 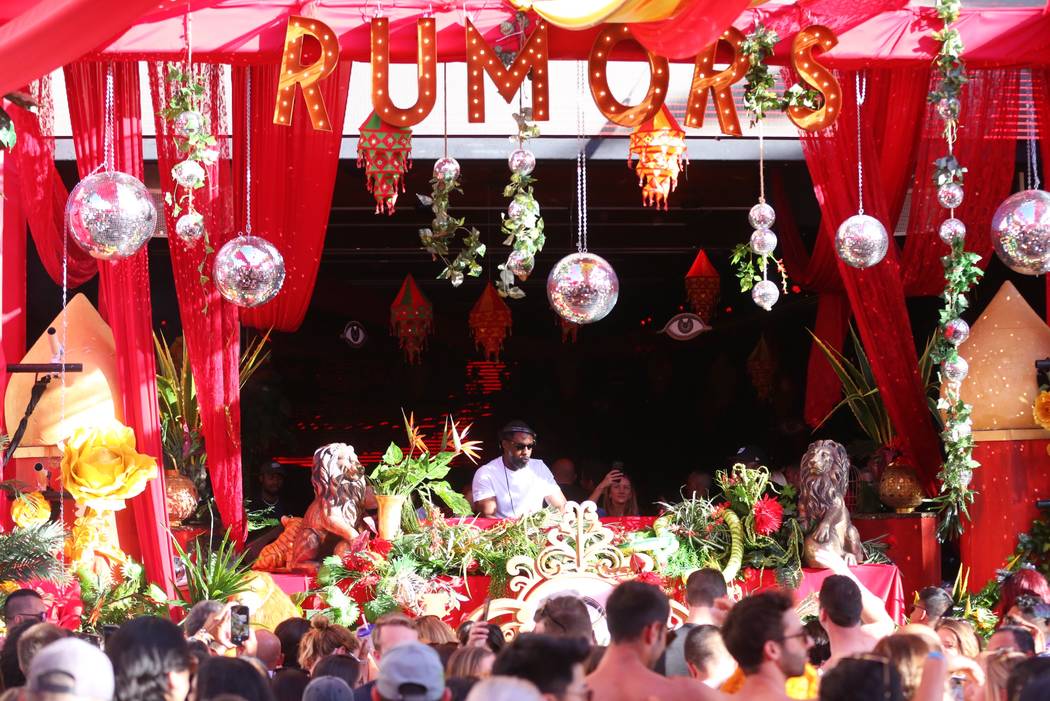 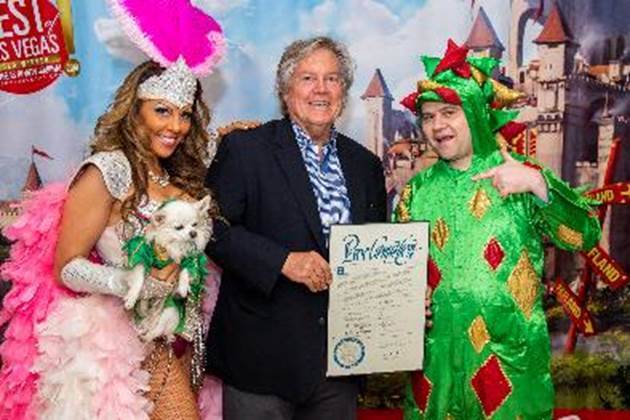 Sam Wills is the performer who made Tape Face a nationally known character.

But onstage, the character extends beyond its creator.

Wills, who began performing the comedy-mime act in 2005, has been recruiting other artists to play the role on the road and at House of Tape. In the coming months we will see more “swing” Tape Face characters, known just by that stage name, to broaden the brand’s reach. In shorthand, they are “T2,” T3” and the like — though only two others are planned.

“We are growing the empire, due to public demand,” Wills says during the latest episode of “PodKats!” “I had always planned to grow the character in the same way as Blue Man Group, who were big inspirations of mine as silent comedy characters.”

But what happens when a ticket-buyer expects to see Wills at House of Tape at Harrah’s and sees another performer and is disappointed? Some visitors to the show, who became fans of Wills — specifically — on “America’s Got Talent” have made that very complaint.

“I have to acknowledge that those people are what we consider ‘super fans,’ and those are the ones who are sometimes borderline obsessed,” Wills says. “They are obsessed with me, which I find creepy and a bit weird, sorry, because I have no interests in anything to do with celebrity culture. I like to have a very normal life.”

One in which he brandishes a staple gun and shoots at a bunch of balloons during an onstage duel, and also performs “Endless Love” with oven mitts.

But Wills adds that his approach is not out of line with the BMG strategy, nor the multiplicity of artists who have played Gazillionaire in “Absinthe” at Caesars Palace, and also on tour, over the years. As he says, “I’ve created what I believe to be a character.”

Tommy Sherlock, a longtime member of Tenors of Rock (currently performing at Planet Hollywood’s Sin City Theater), is in the touring cast of “Jesus Christ Superstar.”

Sherlock plays Pontius Pilate in the touring revival of the rock musical, which debuted 50 years ago. The production runs from Nov. 5-Nov. 10 at the Smith Center.

Sherlock has never performed in any version of the show and, as expected, considers landing the plumb role a career highlight.

“Anyone who knows good music and loves rock knows this is one of the greatest shows to be a part of,” he said Wednesday in a text message “The show is 50 years old and going stronger than ever. That’s all the evidence you need.”

The commendation coincided with Van der Put’s triple gold-medal haul in the annual Best of Vegas contest, being named Best Comedian, Best Magician and Best Headliner. This is tall cotton for an artist who has built a marketing campaign as the “loser’ of “America’s Got Talent,” which is technically true though Piff made the show’s final 10.

Still, better to drop that messaging. This guy is no loser.

The guy behind the DJ booth at “Art of the Wild” at Encore Beach Club over the weekend who looked like Idris Elba, was. The film and TV actor performed a set at the inaugural event, which drew several techno and house artists.

Dani Elizabeth and Doug Leferovich have been swapping understudy assignments. Elizabeth is the emcee of “Crazy Girls,” which just passed the 32-year mark, currently at the aforementioned Sin City Theater. Leferovich is Lefty, the non-verbal janitor character in Murray Sawchuck’s magic show at Laugh Factory at Planet Hollywood.

When Elizabeth has been out, Leferovich — in a speaking role — steps in. And last week, Elizabeth subbed as Lefty in Sawchuck’s show at Laugh Factory. This makes sense if you know that Sawchuck and Leferovich have been friends and worked together for years, and Sawchuck and Elizabeth are a couple. This is some seamless relationship action.