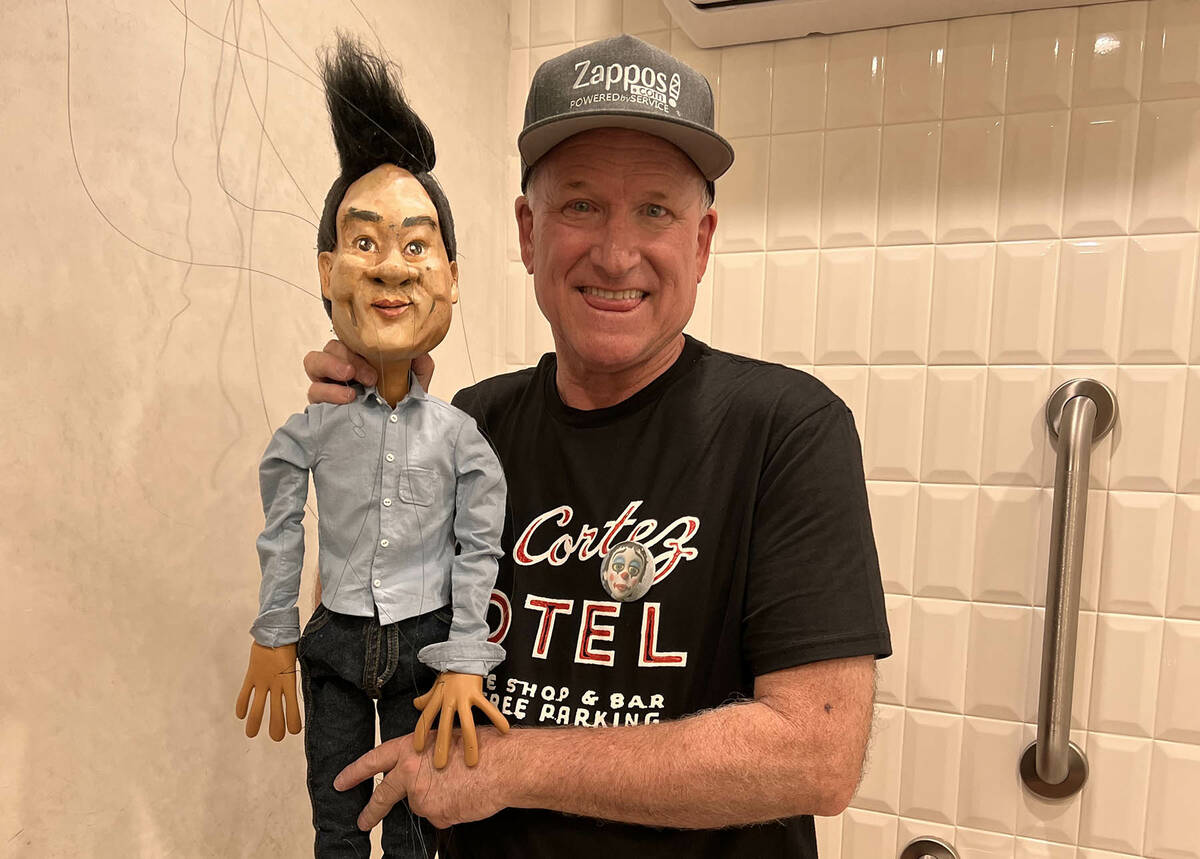 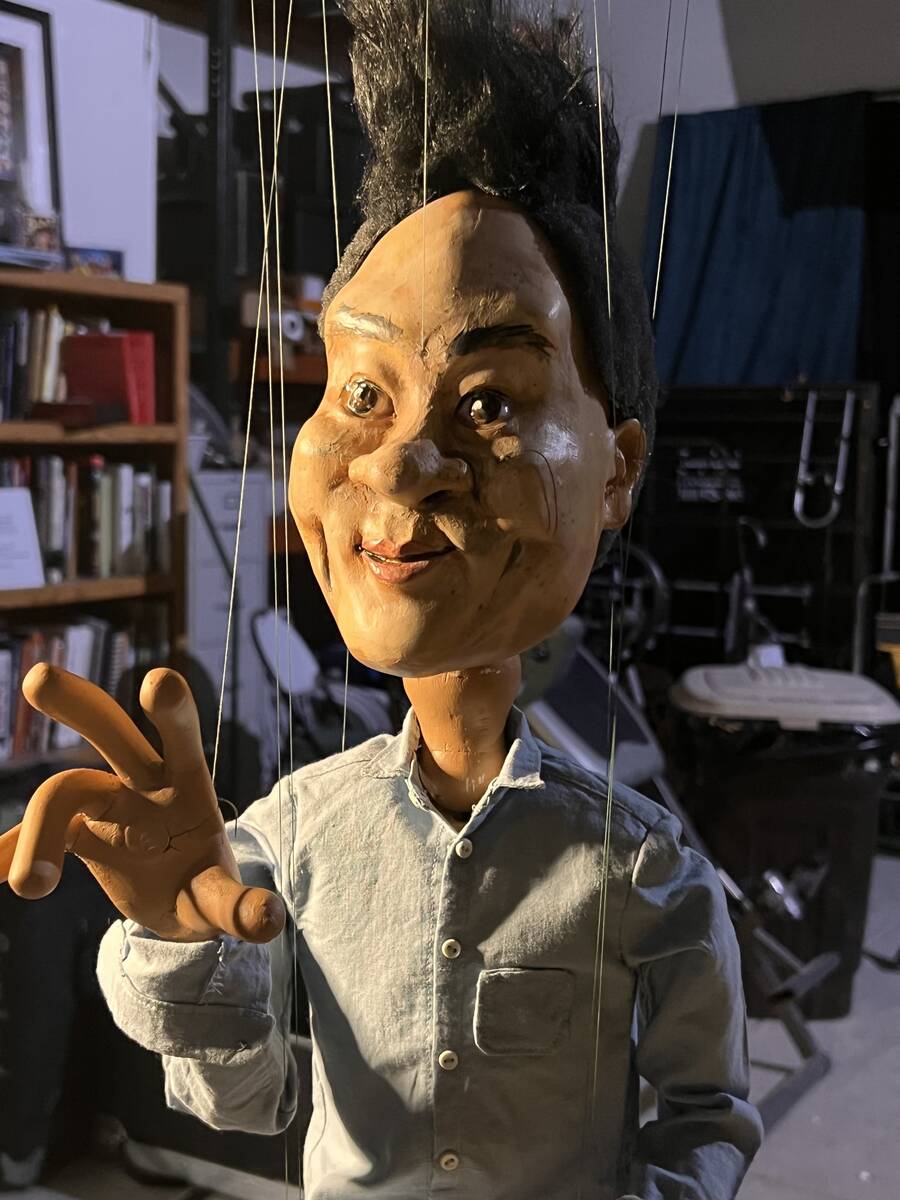 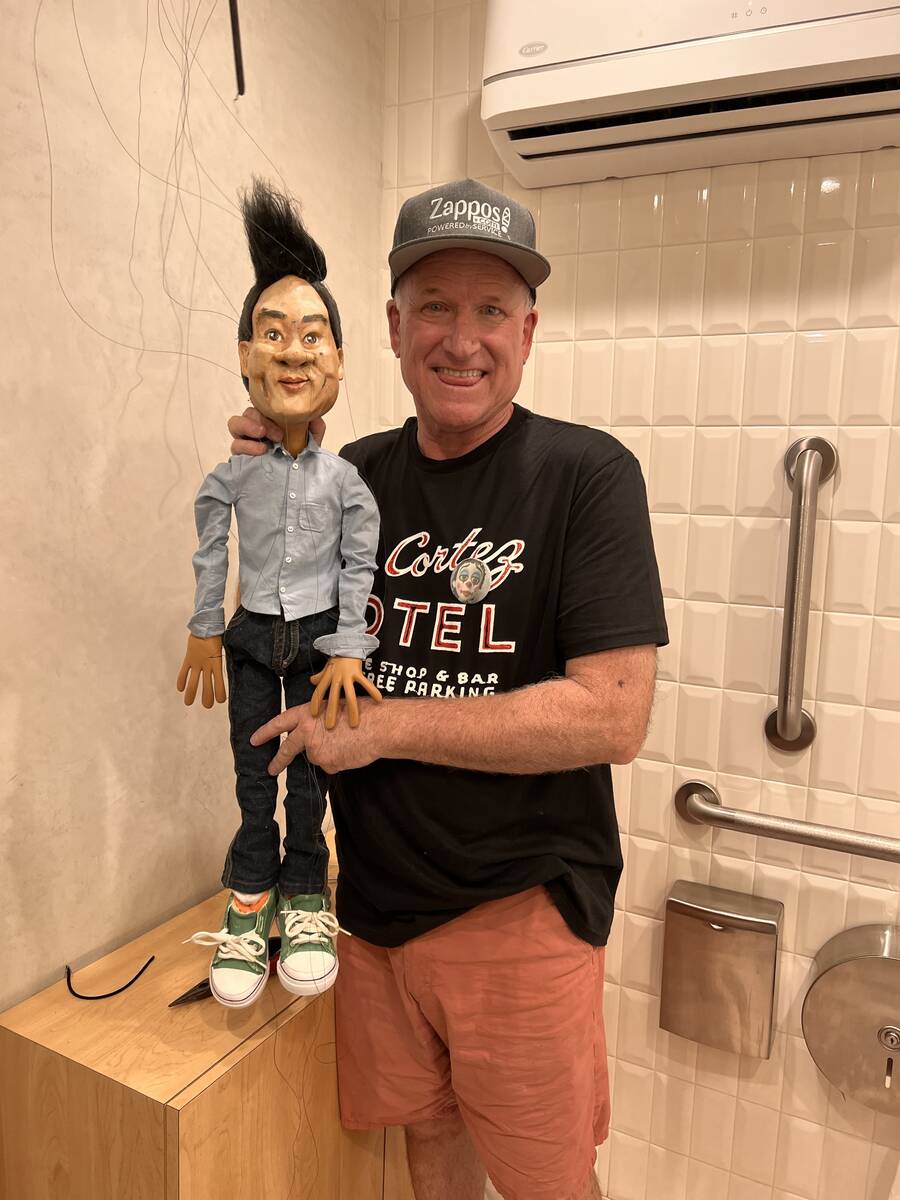 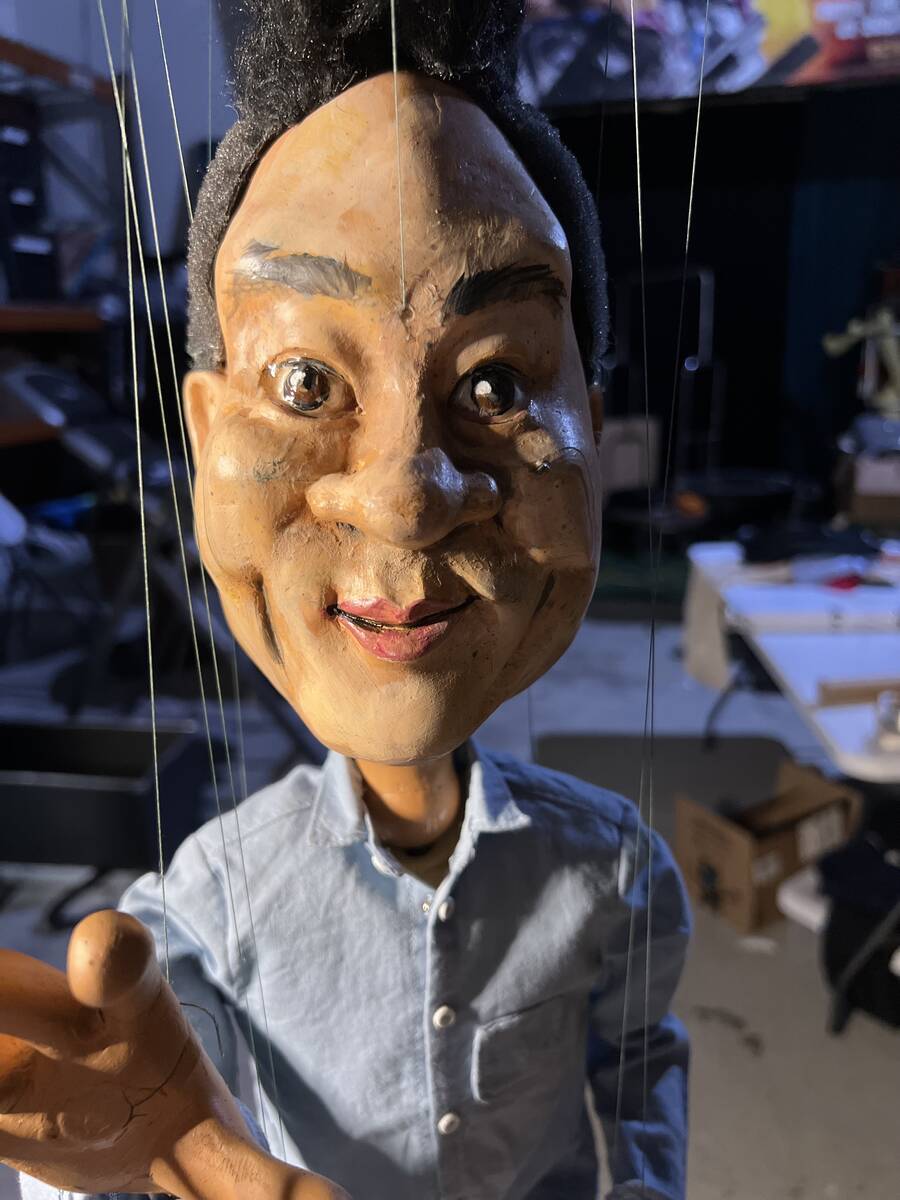 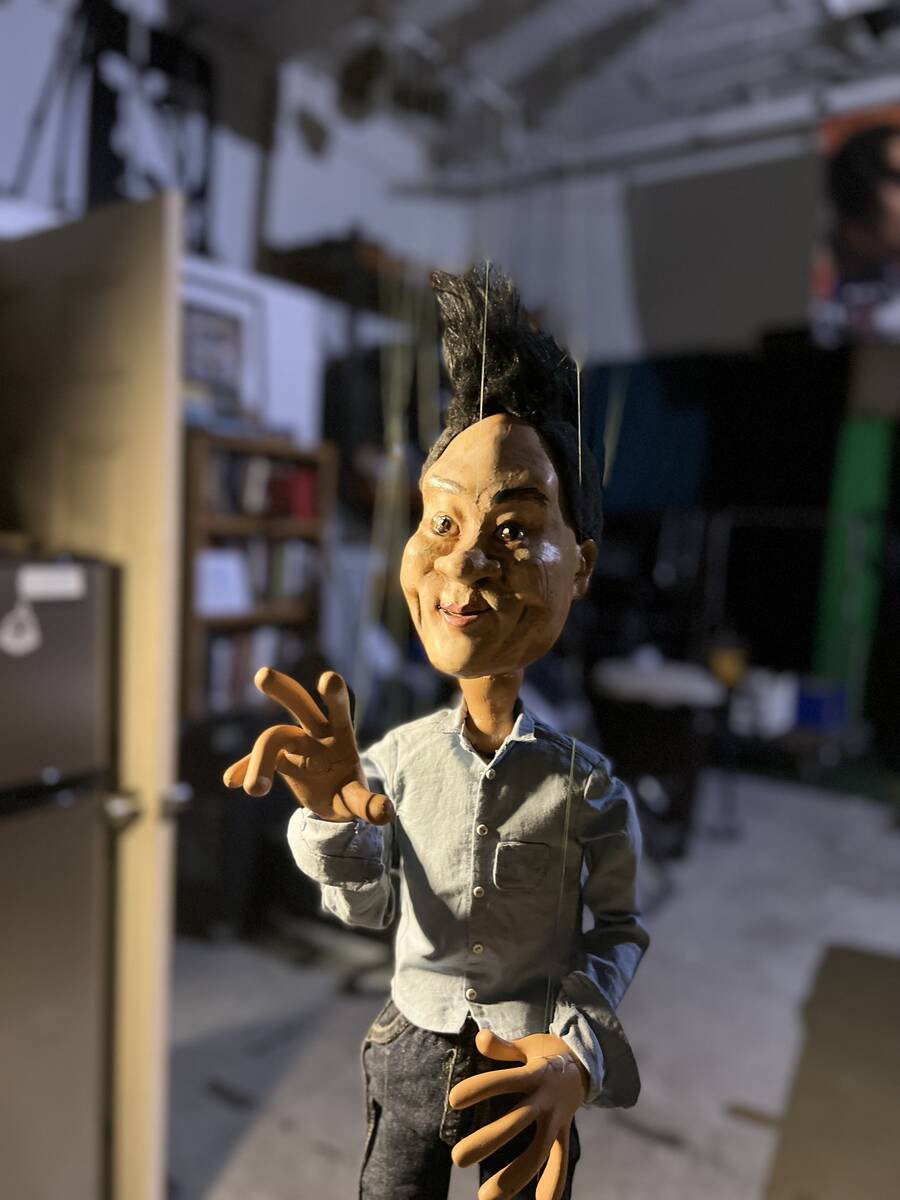 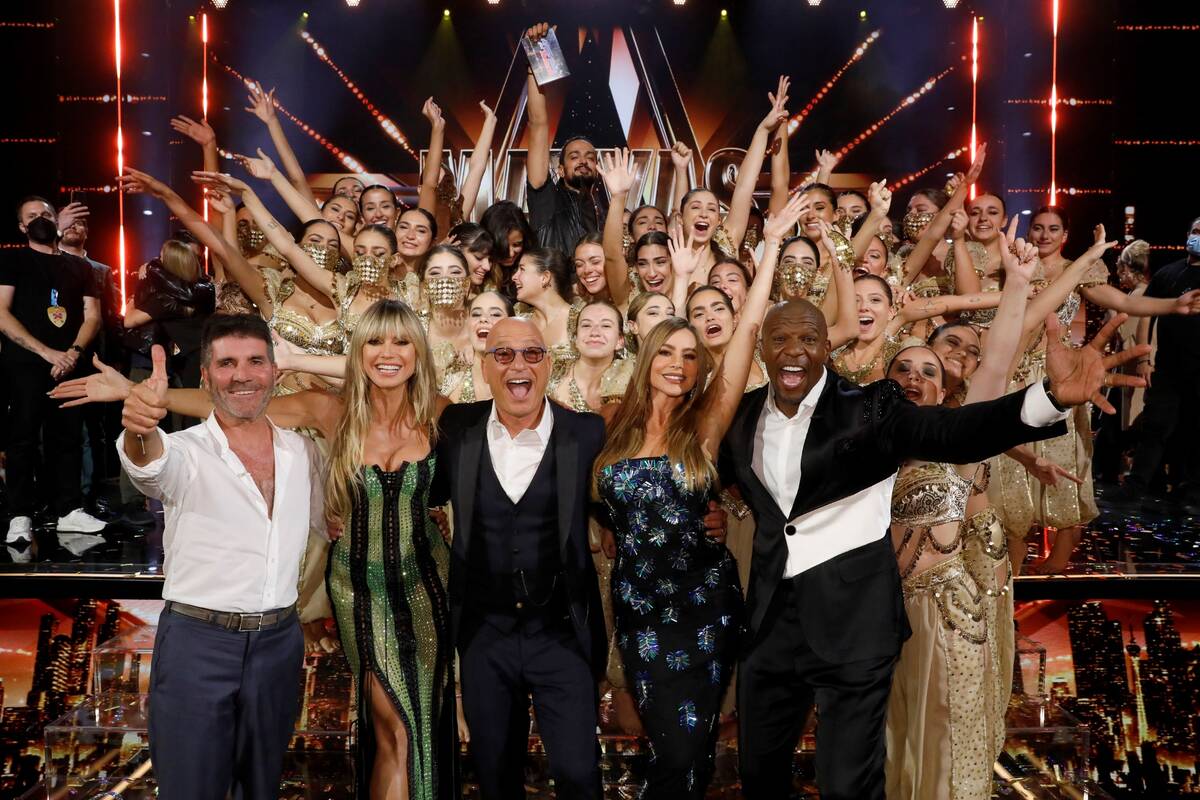 It’s not a statue, exactly. But Tony Hsieh is being honored with a figure in downtown Las Vegas.

Puppet master Scott Land has developed an uncanny marionette of Hsieh to be displayed at Zappos headquarters on Stewart Avenue and Las Vegas Boulevard (the former City Hall building).

Land’s latest creation was premiered Thursday night at Zappos’ Tony Hsieh Theater, with Hsieh’s family and actor David Arquette on hand for the unveiling. It will be put on public display midweek.

“It’s going to be an operating marionette, and then it will become a display piece for Zappos,” Land says. “We think this is a very appropriate, heartfelt way to remember him.”

The puppet will probably sit in the open, along with other figures created by Land at Zappos Central. These include a pair of puppets inspired by Zappos employees.

Land had appeared with Arquette at the theater on Aug. 30, when Arquette portrayed Bozo the Clown (he owns the Bozo brand license) and Land worked as Scott Land the Puppet Man. This was in a private show for Zappos staffers.

Previously, Land has worked in Arquette’s Bootsy Bellows club in Hollywood, which for the past 11 years has presented Land’s marionettes for celebrities on the dance floor.

Land’s work was a surprise to Hsieh’s family members, who had not realized he’d be recognized in such a distinctive manner. The downtown Las Vegas visionary and founder of the Downtown Project died in November 2020 of injuries he suffered in a house fire in Connecticut.

Land is famous among puppeteers as the designer of all the marionettes in Trey Parker and Matt Stone’s 2004 comedy “Team America: World Police.” Land’s work is in every scene of that movie.

Land and his wife, Lisa, operate Team Land Productions in Las Vegas. The Lands are a creative team in many projects. Lisa painted the Hsieh figure, which took two weeks to create. Normally, such a puppet would take three months, but this one was rushed after Arquette and Land appeared together at the theater in August.

If it seems an odd way to pay tribute to an icon, understand that Hsieh was known for his unorthodox tastes and quirky sense of humor. Displaying this little figure is entirely appropriate.“The family was actually moved by it,” Land said. “The puppet made his mother (Judy Hsieh) cry. She was very emotional. I think we all were.”

The Mayyas, the all-female dance team backed by the Lebanese government, are headed to “America’s Got Talent Live” at Luxor after winning Season 17 of the NBC show last week.

The challenge will be to get as many, if not every, member of the cast to perform in Las Vegas. The team won “Arabs Got Talent” in 2019 (which is the first I have known of that show), and blew the minds of the “AGT” judges.

As Simon Cowell said after the team’s semifinal performance, “Every single one of us in this room, I promise you, are going to remember this moment. This is not just going to change your lives, and this is going to sound very dramatic, this is a performance that changes the world. It was as good as it gets … respect.”

Runner-up Kristy Sellars, whose wild, multimedia pole-dancing wowed the judges and TV audience, is also a natural for the Vegas show. Specifics about who joins the Luxor production from Season 17, and when, are to be announced.

Peril and Emmet appeared on behalf of to the Metaphysic artificial intelligence company. The crossover technology made it appear as if Cowell and Heidi Klum were backing singers, live and onstage, for Elvis on “You’re The Devil In Disguise.” (Do an online search for this, it’s pretty fantastic.)

In June, Emmet sang “You’re The Inspiration,” with Cowell’s face appearing on his body by way of Metaphysic trickery

Also in the finale, Fator appeared with fellow ventriloquial stars Darci Lynne and Celia Munoz for “Somewhere Over The Rainbow.”

Remember Johnny Friday, the Santa Fe & The Fat City Horns drummer who returned last month after suffering a heart attack onstage? Friday has checked in with his medical bills for emergency quadruple-bypass surgery: $740,000. That’s for “most” of the bills.

Fortunately, Friday is covered by his wife Mary’s health insurance, through Grainger commercial and industrial equipment supply company. So he’s paid about $4,000 out of pocket. The man is fortunate. Catch the band, as always, at 7:30 p.m. Mondays at The Copa Room at Bootlegger Bistro.

Are you ready for some football? We ask, musically. Illuminarium at Area15 has debuted its Monday Night Football viewing experience. The game will be projected all around the venue, so you will feel as if you are in the middle of the action (just don’t sack anyone, OK). The evening offers noshes and beverages from the adjacent Lumin Café & Kitchen late-night menu. Doors are open 30 minutes prior to kickoff. Afterward, guests can stay for Illuminarium After Dark, the adults-only party in the “Space After Dark” venue. Go to illuminarium.com/lasvegas/sports for the entire game plan.