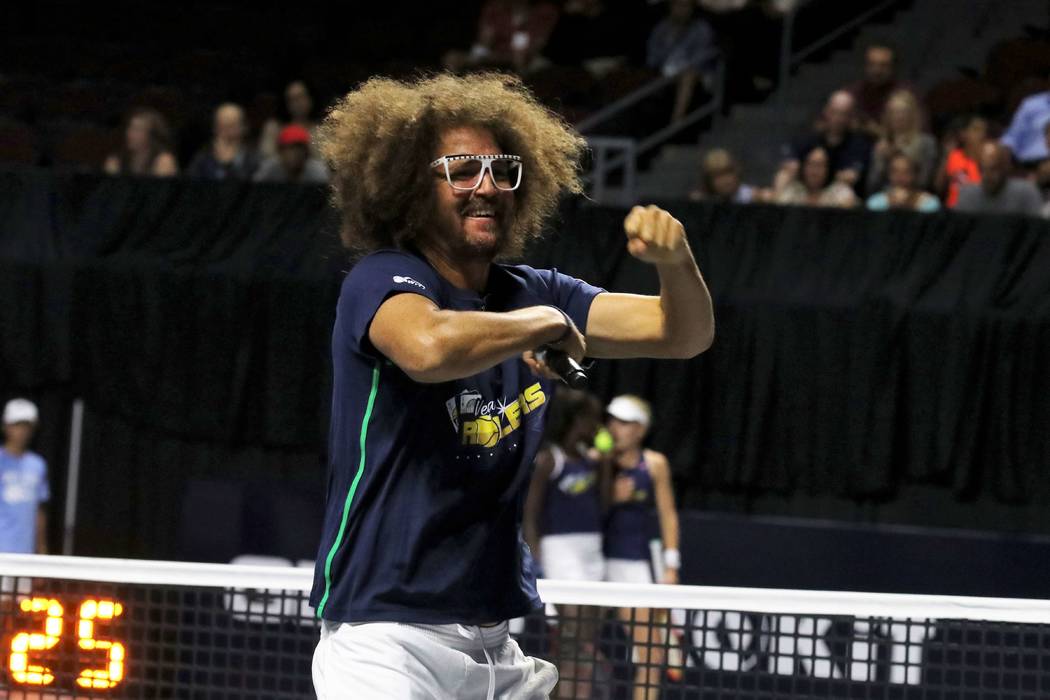 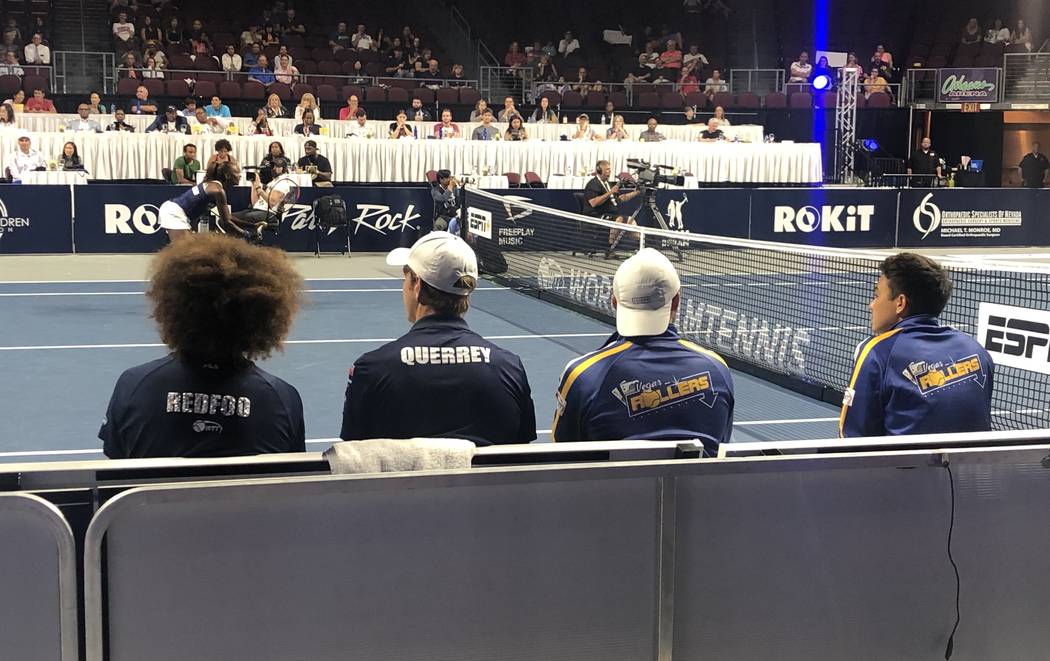 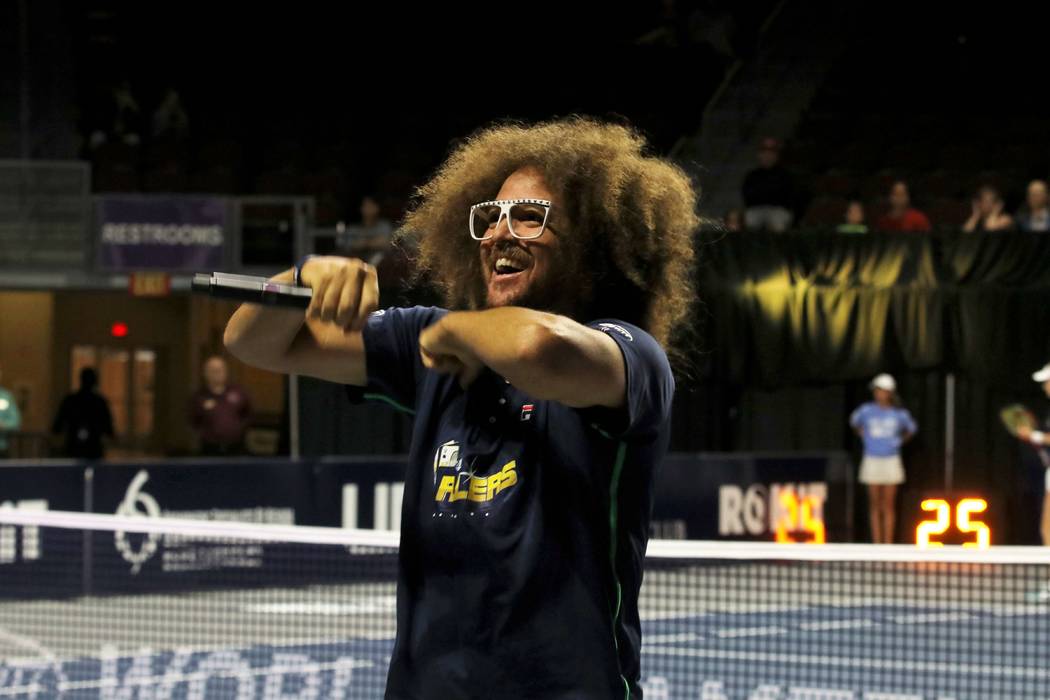 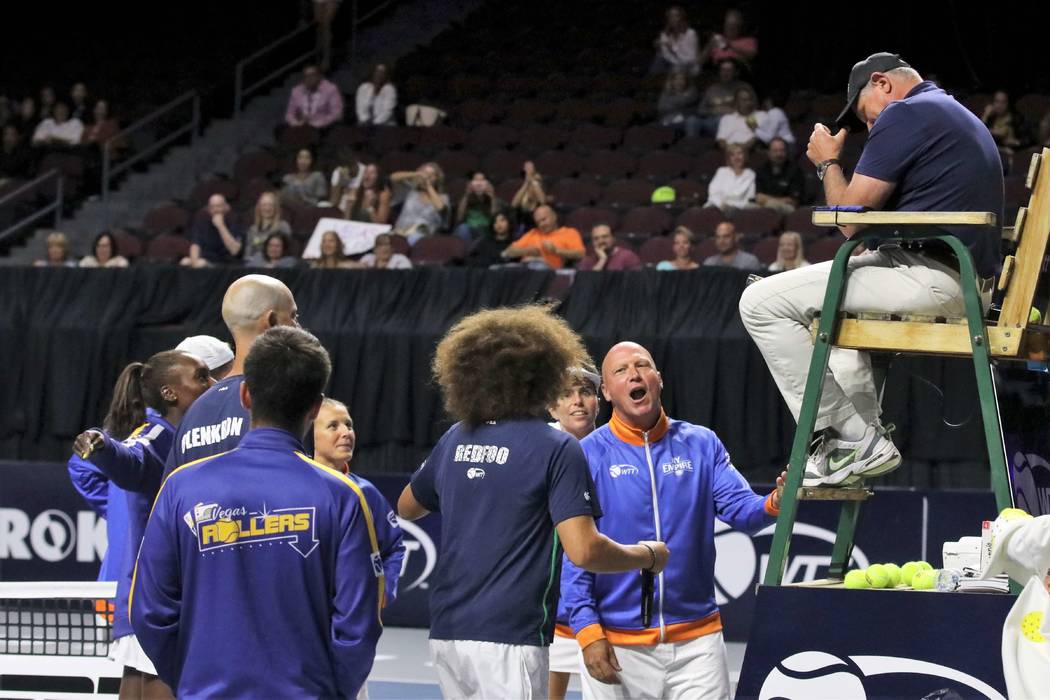 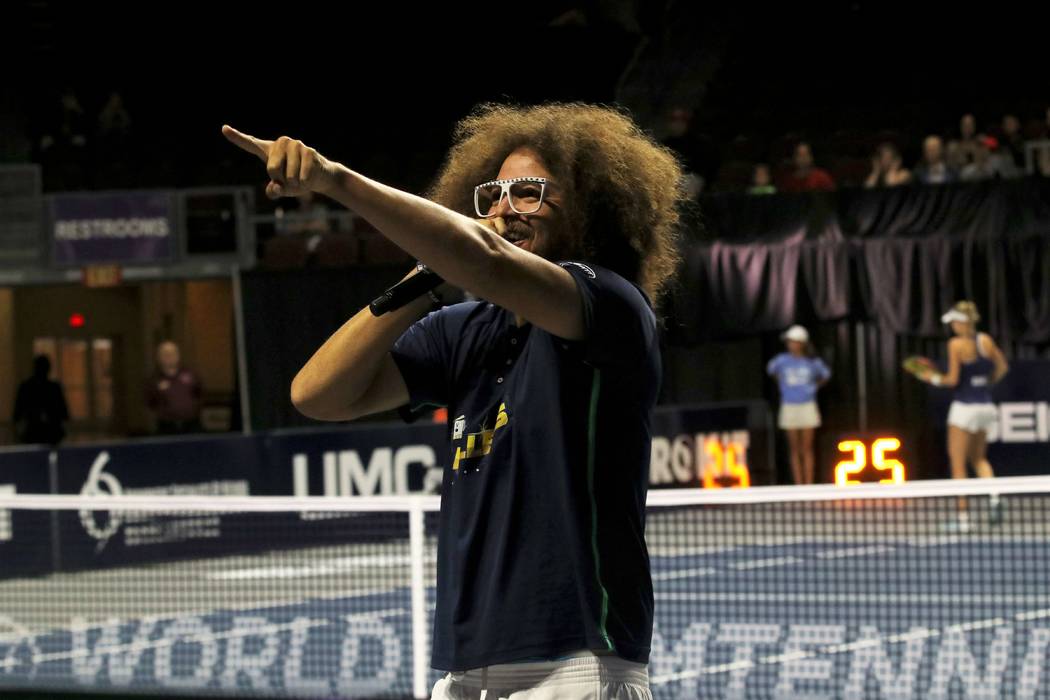 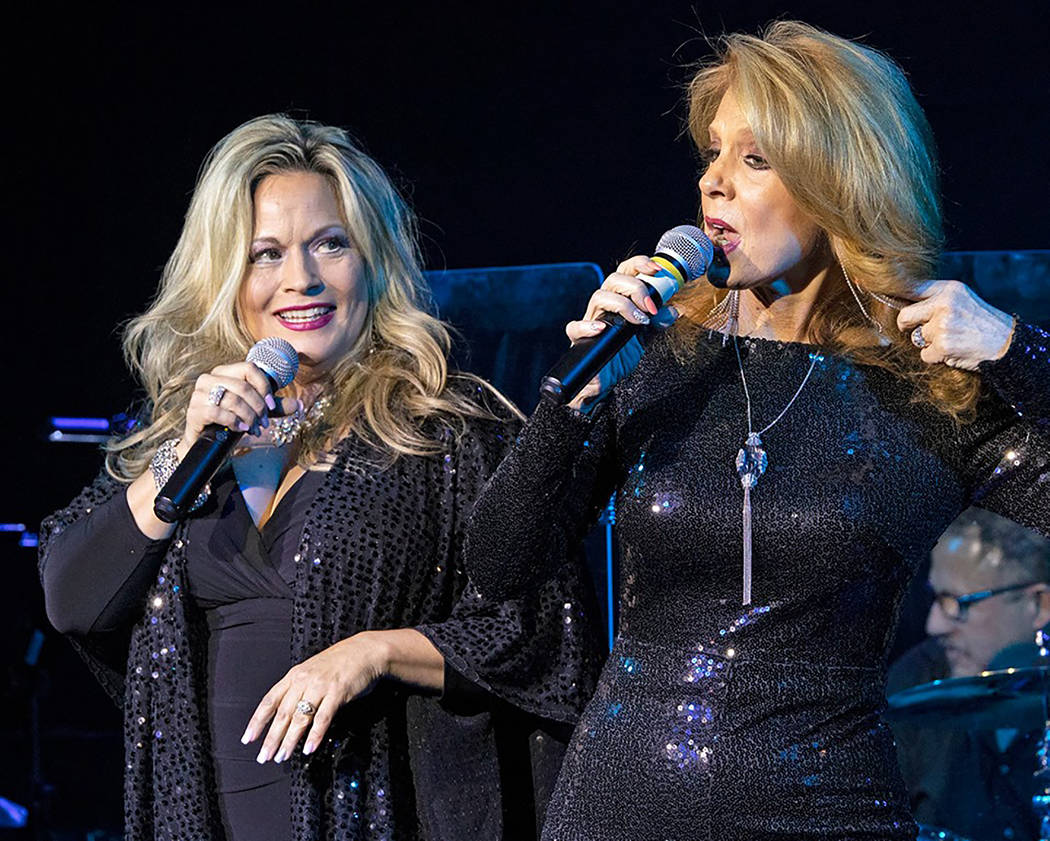 Imagine going to a New England Patriots game and, suddenly, Nick Caley grabs a mic on the sideline and starts shouting, “Time for a Paaaaats attaaaaaack!” while madly gesturing with his arms.

It would never happen. Caley, for the sake of reference, is the Pats’ tight-end coach. He’s a crucial member of the multiple-Super Bowl champion team’s braintrust. A fine football mind.

But he’s no Redfoo.

Redfoo is the titillating tennis tutor and resident hip-hop superstar who generates life into the Rollers’ matches at Orleans Arena. He’s not a mascot. The Rollers have one of those, too, a person wearing a jumpsuit with a gargantuan tennis-ball head, curled lip and a spit-curl in his hair. He is known as King of the Court, played by Clayton Alenik, a thin person to portray a Presley-inspired figure, but he grooves big-time to “Viva Las Vegas.”

There is a in-arena “hype man,” too, at the Orleans, a sax-bearing personality known as Ssssnake, and a dance team that features a dancer in “Vegas! The Show” and “Zombie Burlesque (Rebecca De Carteret), and performer in of “Fantasy” at Luxor (Yesiney Burgess).

This dance team is no joke, tennis fans.

The scene is set by team GM Sally Dewhurst, and husband-wife entertainment directors Nicky and Laetitia Dewhurst, all of Cirque fame. None other than doubles team the Skating Aratas of “V — The Ultimate Variety Show” opened, and aced, Tuesday’s performance.

And Redfoo is the ringleader and such a captivating figure, enticing me to LMFAO — coincidentally the name of the hot-selling EDM act he founded. Foo (his shorthand nickname) has created and mastered the rotating-arms move, a revved-up version of the traveling call in basketball, which has become the Rollers’ signature gesture. Just don’t try it while driving.

The man who commands all of this attention happens to be the son of Motown founder Berry Gordy. At Orleans Arena, Redfoo reigns supreme. He is smokier than Robinson. He is all four of the tops (sorry, we can’t resist the temptations).

There’s more than enough racket, for sure. Even Tuesday’s match, which was not close to a sellout, was impressively loud — except during play.

“There is an unspoken rule not to make noise during a point,” Redfoo said. “But between points, it’s time to be obnoxious.”

Redfoo’s participation is no gimmick, though he is unique in that he coaches and also summons energy from the assembled masses. The artist whose LMFAO song “Rock Party Anthem” has become a club staple (usually played just before the firing of Co2 cannons) was a great youth player. He didn’t seriously consider a career in music until he broke his right wrist while snowboarding in Sweden when he was a teenager.

“I had to focus on my music career,” Redfoo said. “But tennis has always been a passion.”

Redfoo returned to the game a few years ago and even took a shot at qualifying for the U.S. Open in 2015, dropping his opening-round match in straight sets. He sponsored the $50,000 Party Rock Open on the USTA Women’s Pro Circuit, held at Darling Tennis Center.

He takes his role on the sideline alongside head coach Tim Blenkiron seriously.

On Tuesday night, the wild-haired recording star waded into an argument with the head linesman after the Rollers’ Sam Querrey touched the net after hitting a cross-court winner. During that debate, it seemed Empire head coach Luke Jensen couldn’t decide to scowl or smile.

Jensen did settle on a replay of the point, won by the Empire. But the Rollers won the match, 24-20. Cue the cannons. It’s party time.

On the topic of anthems and Rollers and professional entertainers, “Fantasy” vocalist Lorena Peril sang the anthem at Sunday’s match against the visiting Philadelphia Freedoms. That match started at noon and was 15 hours after Peril sang before the Manny Pacquiao-Keith Thurman bout at MGM Grand Garden Arena.

Peril had for days expected to sing for the Rollers, but she was a late add for the Pacquiao-Thurman fight. She was actually driving to the grocery store when MGM Resorts International entertainment exec Stephanie Sanchez — herself a former “Fantasy” singer — asked if Peril was available to sing prior to the title bout. “Yes!” Peril said. “I am interested.” This was at noon, an hour before sound check at the Grand Garden Arena.

Peril made sound check, and sang the anthem in time to make it to her 10:30 p.m. start at “Fantasy.”

“I was joking, ‘Yeah, I’m filling in because Lady Gaga and Celine Dion backed out,” Peril said during a phone chat Wednesday afternoon, as she (again) was heading to Smith’s to shop. “But it was short notice. I did a quick U-turn.”

Peril has sung for the Vegas Golden Knights, L.A. Kings, L.A. Clippers, San Francisco Giants and San Francisco 49ers over the past decade or so. On Saturday, she found herself pushed into Pacquiao’s corner as an octet of singers performed the national anthem of the Philippines.

“I was right next to Pacquiao, nowhere to go, so when it was my turn I put my fist out,” Peril said. “I touched gloves and came out singing.”

“Ilusion Mental” starring Santiago Michel has closed at Anthony Cools Experience at Paris Las Vegas. Michel’s was the only Spanish-language production show on the Strip …

Slash featuring Myles Kennedy and the Conspirators have been touring nonstop since September and feature Las Vegas rocker Frankie Sidoris on guitar. But the band is not playing a Vegas date. Instead, Slash fans can catch Guns N’ Roses at the Colosseum at Caesars Palace on Nov. 1 …

Thursday is a big day for Thunderland, SPI Entertainment founder Adam Steck’s adventurous venue at Excalibur. If the venue meets all code requirements, it opens for ticketed shows Monday night. It’s the new home for Hans Klok, Australian Bee Gees and Thunder from Down Under …

A cool hang-closing alert for “Scott Bradlee’s Postmodern Jukebox Hideaway at 1 Oak Nightclub at the Mirage. The show bows out after Saturday’s performance. Regardless of talent and ingenuity, the show’s throwback format is not an easy sell in a nightclub. The hunt for a new haunt is on.