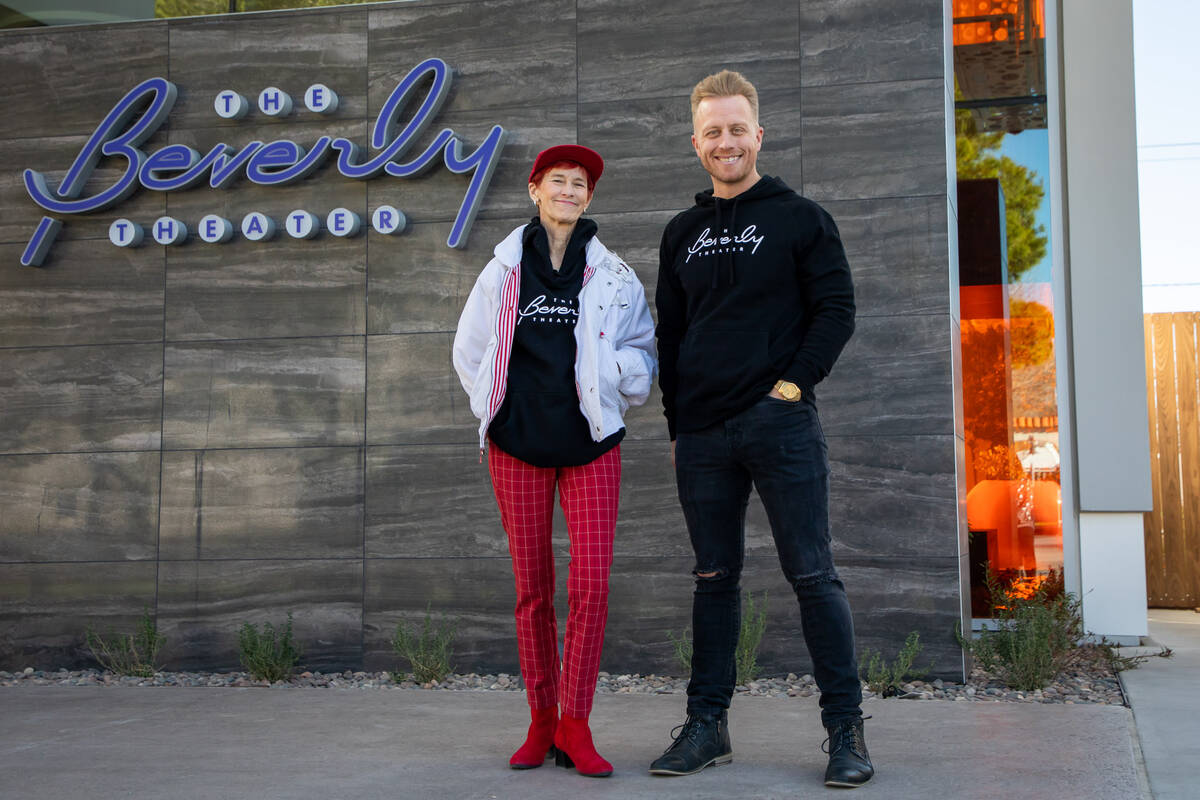 Beverly Rogers, founder of the Rogers Foundation, and Kip Kelly, program manager, pose for portraits in the front of The Beverly Theater on Saturday, Jan. 23, 2023 in Las Vegas. (Amaya Edwards/Las Vegas Review-Journal) @amayaedw5 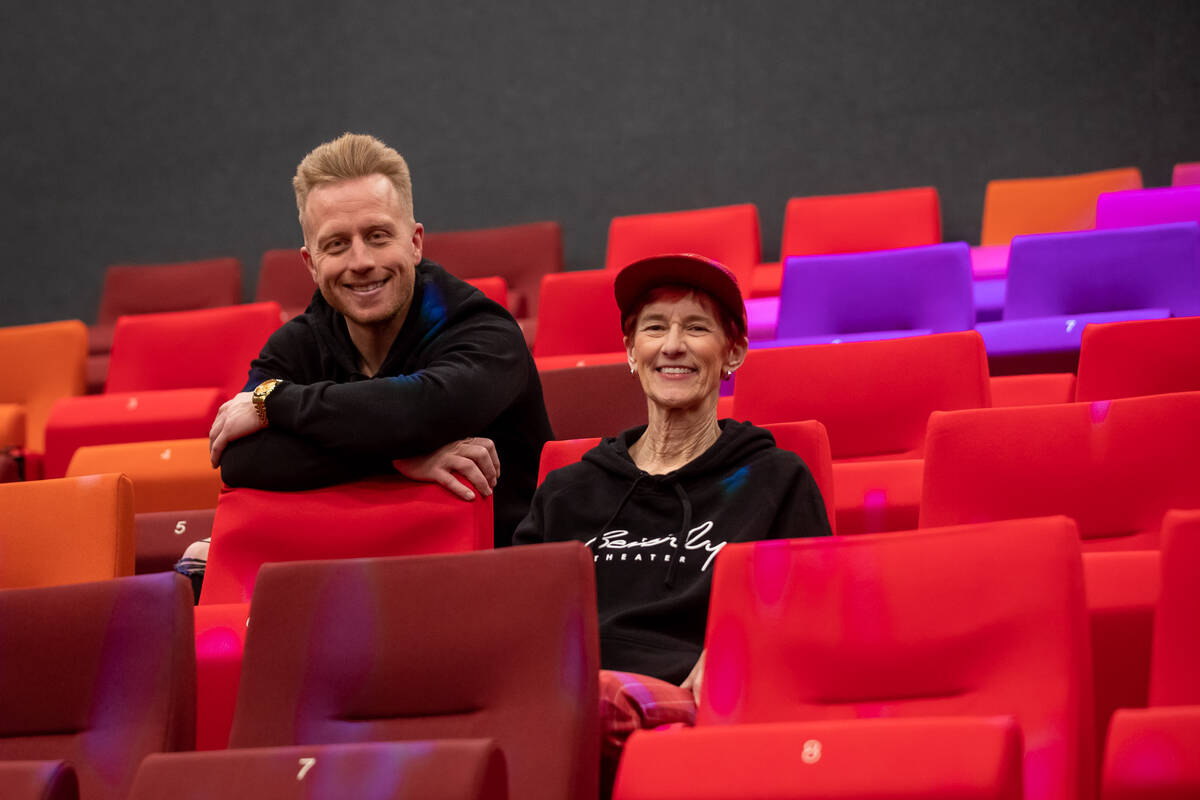 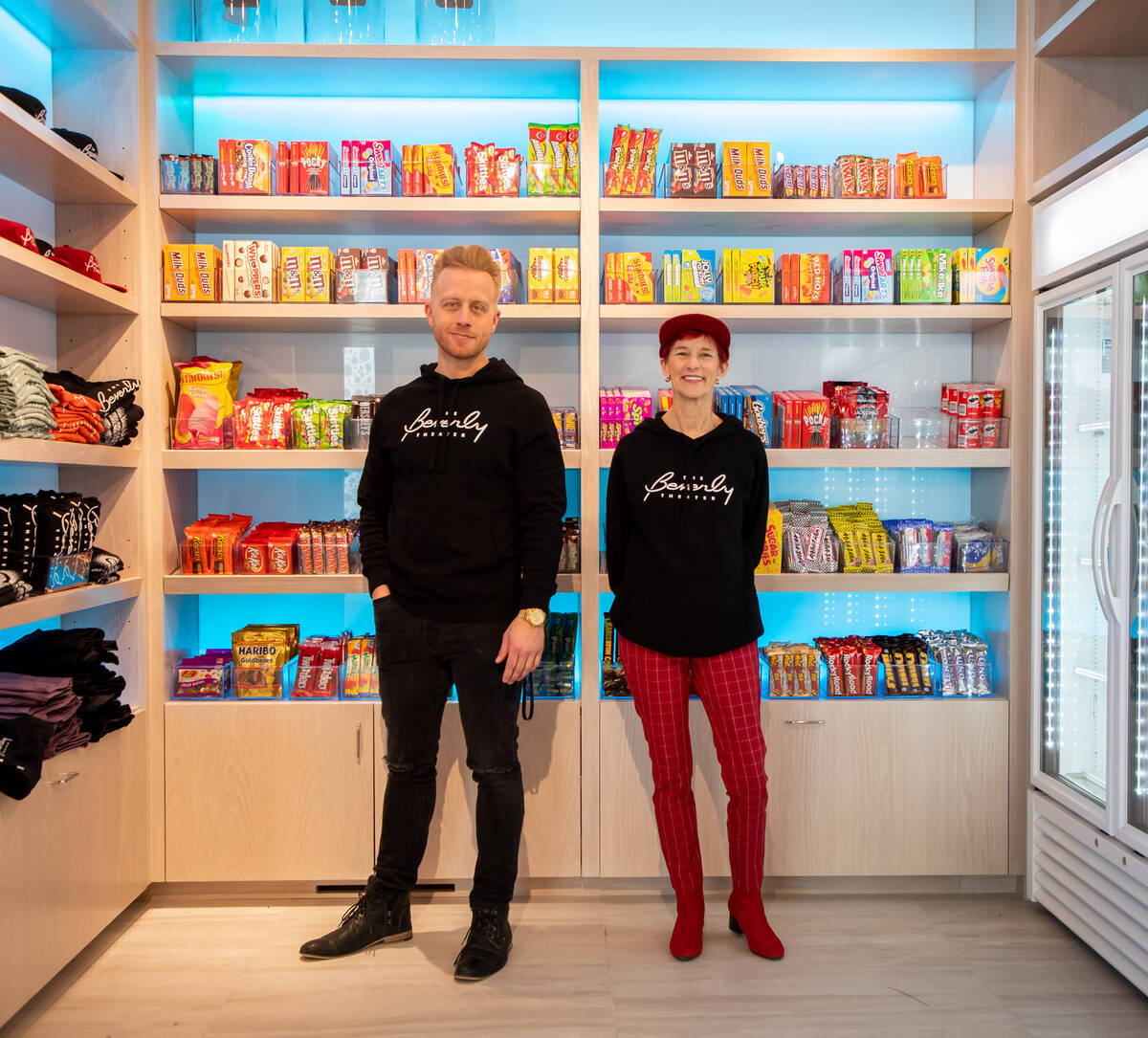 Beverly Rogers has always preferred convertibles, for their style and sense of adventure. She loves going open-air in her Porsche, even on a cool day, turning on the seat warmer and cruising to her new art house.

This, too, is a convertible vehicle bringing panache to downtown.

Rogers is the Beverly of The Beverly Theater. The entertainment and literary venue is rising splendidly on the corner of 6th Street and Bonneville, next to the The Writer’s Block at The Lucy.

The venue opens with a series of events March 3-March 7. As always, ambition is evident in this schedule. We’d expected an opening at least two weeks later. Suffice to say the Beverly team is running open throttle.

Rogers gave her namesake theater a good look Saturday morning, donning her Beverly Theater- branded ballcap and sweatshirt. He look matched the lively color and vibe of the 146-seat main theater, where the decor is reddish, orange-like and purple-esque. Rogers has built a dedicated team, and she’s the driver.

“Our city has never had a true art house, and my hope is that The Beverly Theater provides an opportunity for people to see and experience things they haven’t yet been able to see in Las Vegas,” Rogers says. “As a faithful supporter of the arts, it’s important to me to make sure the community has access to a permanent home for independent film and artistic expression.”

The Rogers Foundation was established to advance the late media magnate and legendary philanthropist Jim Rogers’ passion for community and education. The Foundation is headed up by Beverly as the board chair, and steered by Creative Director and Chief Experience Officer Kip Kelly.

Community events at The Beverly are free and open to the public, but require an RSVP. Follow the progress @beverlytheater. Sign up TheBeverlyTheater.com for updates.

The March 3 event starts with a VIP, invitation-only, red-carpet presentation of “Past Lives.” The romance film has screened at Sundance Film Festival. Nora and Hae Sung, friends from childhood in South Korea, are reunited in New York for one week. The project was created by writer-director Celine Song, starring Greta Lee and Teo Yoo, produced by Killer Films.

The film is to showcase the main theater’s flexible seating design (those 146 seats can retract to create additional staging space) and audio-visual technologies. The screening is followed by a public Q&A session with Academy Award-winning producers Pamela Koffler and Christine Vachon (Killer Films), and moderated by Las Vegas writer, editor and lecturer Amanda Fortini. An open house of all The Beverly’s spaces and amenities follows.

A Flick and it’s Lit

A public movie viewing (officials say the film is to be a “surprise”) is set for March 4. A schedule of events in the Beverly Lit series is March 4-March 5, a collaboration with The Writer’s Block and UNLV’s Black Mountain Institute (BMI). Free and open to the public, the Lit events will take place in the theater, courtyard, and at Segue, which is the rooftop terrace that will stage jazz trios among other A&E offerings.

Premiere week Lit events will include readings, author Q&A’s and discussions. The scheduled presentations will feature novelist Walter Kirn, in conversation with Native American fiction writer Sterling HolyWhiteMountain; BMI presentation of award-winning writer Percival Everett; a BMI Fellows reading; and a screening of dramatic movie “First Reformed,” with a discussion with the film’s writer and director Paul Schrader, Killer Films and others involved with the compelling project.

Kelly has been working extensive hours out of his office in the downtown annex. He reviews everything, from where to display the fancy portrait of Teddy (Rogers’ pet Chow, for whom the green room is named), to which flavors of Pringles to offer at the concession stand.

Kelly is dedicated to this conversion of downtown.

“We are proud to have built a first-of-its-kind film house and performance theater for the people who live in Las Vegas,” the indefatigable creative director says. “The flexibility and capabilities of this venue are unmatched. We promised to bring uncommon content and programming to the city, and we intend on delivering.”

Mondays Dark kicks off its 2023 schedule with music of Katy Perry at 8 p.m. Monday at The Space. Mark Shunock is back as emcee. The band blazes, the roster is filled with top singers, and the theme should invite rampant frivolity (especially if someone dresses as Mr. Poo). Tickets for the benefit for Project Inclusion are available at MondaysDark.com.