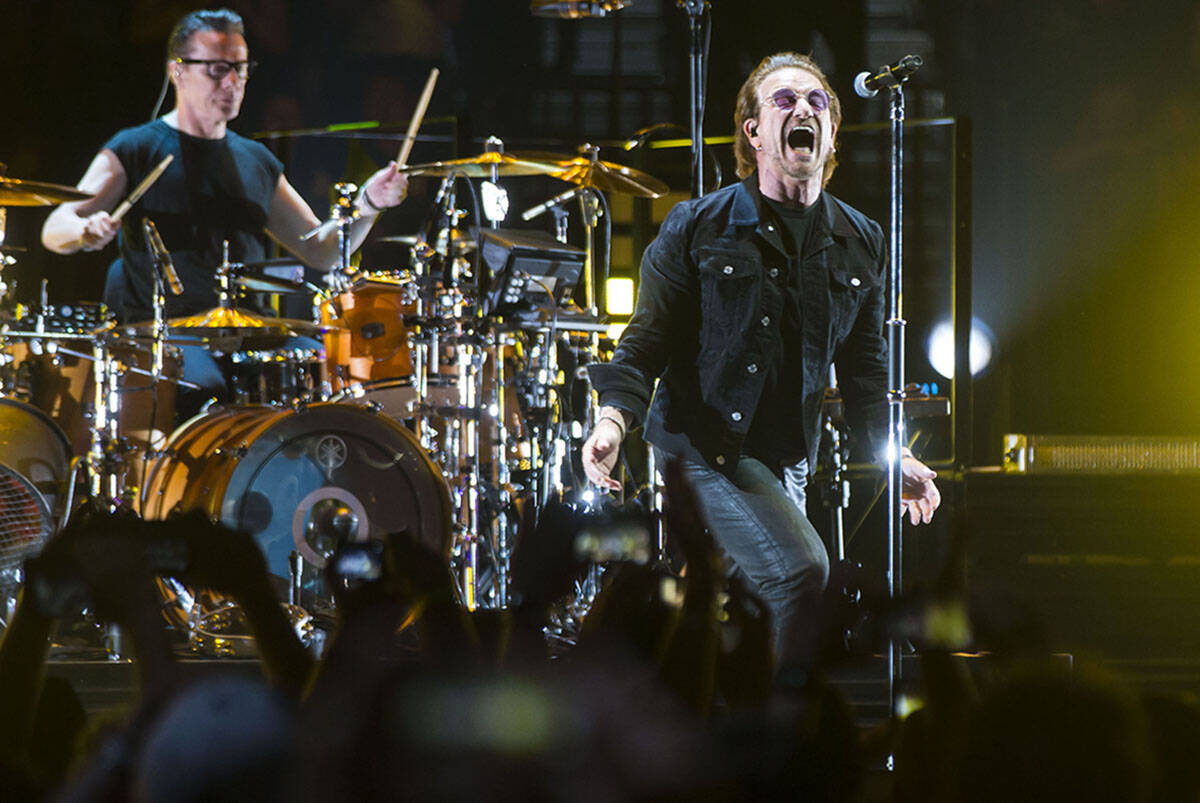 Larry Mullen Jr., left, and Bono of U2 perform at T-Mobile Arena in Las Vegas on Friday, May 11, 2018. (Chase Stevens/Las Vegas Review-Journal) @csstevensphoto 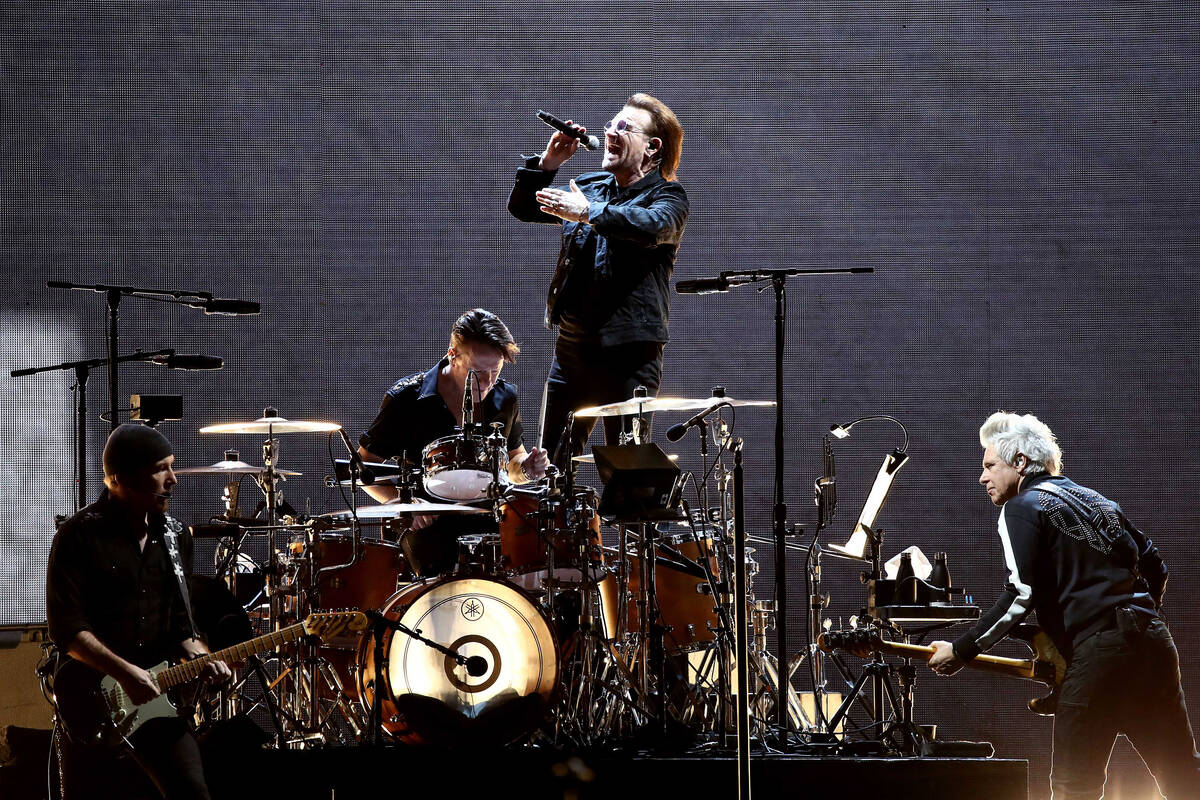 From left, The Edge, Larry Mullen Jr., Bono and Adam Clayton of U2 perform at the Gocheok Sky Dome on Dec. 8, 2019, in Seoul, South Korea. (Chung Sung-Jun/Getty Images/TNS)

It is unlikely U2 will play any live dates next year with drummer Larry Mullen Jr. The original member has disclosed he needs surgery if he is to continue performing.

As you might have guessed, Las Vegas factors into Mullen’s ability to play drums.

Reportedly, and as of today, Mullen’s ongoing health concerns have not altered the band’s plans to open The MSG Sphere next fall.

Mullen told the Washington Post this week, in a rare interview, of his plans for surgery. Mullen is battling ongoing neck and elbow problems and also has a history of knee and back ailments.

The information was paraphrased deep in profile of U2, pegged to the band’s upcoming Kennedy Center honor. The awards show will be telecast at 8 p.m. Dec. 28 on CBS.

From the Post story, referring to Mullen, “He’s blunt — he says if the band plays live in 2023 it will probably be without him, as he needs surgery to continue playing — and admits the dynamics in the band are not the same as they were decades ago.”

Mullen’s absence would significantly shake up the band’s personnel for its reported series at The MSG Sphere next fall. Published reports and sources familiar with the band’s booking have indicated the residency is to run six weekends, 12 performances total, beginning in September. Those plans reportedly remain unchanged.

The piece’s author, Geoff Edgers, added context on his Twitter page. “I interviewed Larry on Zoom earlier this month. He was gracious and thoughtful. When I asked a question, he typically paused to think in silence before responding. I got the sense he appreciated the chance to speak in a story about the band he essentially founded.

“I did not ask about his physical issues. He volunteered them. He said that he had been told, in the past, to rest or get work done and take time off. Instead, he pushed himself to perform. He does not want to now. He wants to fix his issues. Because he wants to drum again.”

Edgers also shared quotes from Mullen, which were not in the original story.

“I really miss the audiences. I miss that interaction even though I’m sitting behind a drum kit … My body is not what it used to be physically. Like next year, I won’t be performing live next year. I don’t know what the band’s plan is. There’s talk of all kinds of things.”

Mullen also offered, “I have lots of bits falling off, elbows, knees, necks, and so during Covid, when we weren’t playing, I got a chance to have a look at some of these things. So, there’s some damage along the way.”

As Edgers noted in his Twitter thread, U2 paused when Edge’s daughter Sian was diagnosed with leukemia in 2010, and also in the aftermath of Bono’s bike accident in 2014 and heart crisis in 2016. With that history, the band could well call off any plans as Mullen recovers. The 61-year-old drummer is an original member dating to the band’s 1976 origins.

There has been no confirmation of The Sphere shows specifically from U2 or venue officials. But Bono referred to the band’s next live venture in an interview this month on “The Brendan O’Connor Show,” hosted by the highly rated Irish media personality.

The U2 front man said, “I can’t announce Vegas, you’d have to shoot me! But if it happens, I can promise you it won’t be like anything you’ve ever seen in Las Vegas or anywhere, ever. There’s no place yet big enough. For us to go, it has to be something that no one’s ever gone before.”

“It will center around ‘Achtung Baby,’ which we feel we need to really honor. But it will also, but we have to have the new songs out don’t we? There’s no place yet, big enough. If we can build one for our audience. But it will be, for us to go, it have to be like no one has ever gone before. That sounds a bit ‘Star Trek.’ Part ‘Star Trek,’ part traveling salesman.”

More than a decade ago, Mullen underwent knee surgery performed by world-renowned Dr. Richard Steadman at The Steadman Clinic in Vail, Colorado. The veteran rocker was quoted extensively a post from the Steadman Philippon Research Institute’s Foundation News publication in fall 2009.

“I’m a street drummer and I’ve physically abused — neglected may be a better word — my body for a long time, through bad posture, questionable technique, throwing myself around a stage, not eating or hydrating as I should have, and sitting too much,” Mullen said. “Almost all the things I do as part of my job are bad for my body. It’s not just the physical act of hitting things. Rock and roll is about freedom and escapism, it’s like running away to the circus … I was not trained as an athlete, but I have to perform like one.”