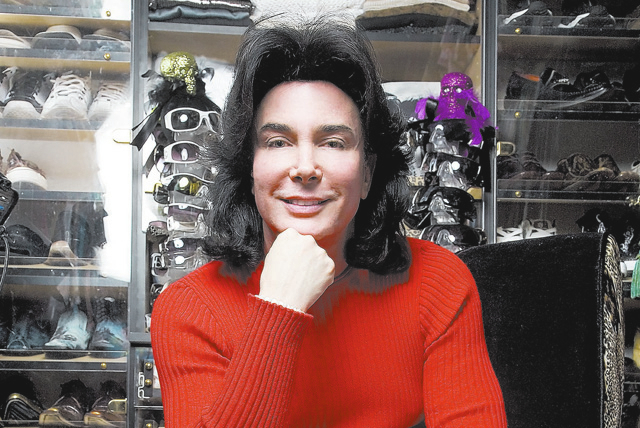 This Friday, Andy Walmsley should be the most popular guy in the Las Vegas entertainment community.

At least he hopes so. These parties are costing him enough.

He’s expecting more than 500 people to witness or participate in the torching of the “Divas Las Vegas” star and co-producer. Previous roasts of Zowie Bowie and Oscar Goodman (which did sell tickets to the public) packed the Stratosphere showroom, despite their 11 p.m. starts.

Walmsley seems to have tapped a collective desire to restore some camaraderie that’s been missing among local show people.

“It’s a bit corny, but I say it’s like our 21st-century Rat Pack. I was always jealous that I wasn’t around in those days,” says the affable Brit, whose chief claim to fame is set design for TV shows including “American Idol” and “America’s Got Talent.”

When he arrived in 2006, Walmsley figured, “All these entertainers must get together and do crazy things.” What he discovered was, “They just don’t, really.”

Walmsley helped cure that, but at a cost. Even with a cash bar for the roasts, “they cost me an absolute fortune.”

“What it really is is an extremely expensive advertisement for me.”

Specifically, “I definitely have had a burning ambition to be a producer for a long time now, probably 10 years,” he says. “I’m gradually trying to put my foot in the door.”

His set designs are seen in Terry Fator and Human Nature’s shows on the Strip, and he lent a hand to two of this year’s musicals at Spring Mountain Ranch State Park.

The roasts offer practical experience as well as networking. “The opening number for the Marino roast has more than 40 people in it, and that’s just the first of five musical numbers,” he says.

But Walmsley adds he probably won’t do as many next year, unless the roasts evolve into a shared burden.

There’s always television. But filming the roasts would probably drain the fun out of them.

“Some of these performers are not used to swearing onstage,” Walmsley says. “The last thing they would want to do is have that go out on TV.” …

On the other hand, booze-avoiding Penn Jillette manages to get a lot more done than those of us who are happy to find a party.

The tall half of Penn &Teller’s latest project is to crowdfund a horror flick, even as he and Teller have a serious documentary on the film festival circuit.

“Help Make Penn a Bad Guy” is the tag line for the fundanything.com campaign to raise money for Jillette’s “Director’s Cut.” Friendly rival David Copperfield joined the fun of doing a video promo for the project.

“Tim’s Vermeer” is the Teller-directed look at art history and technology, specifically about the efforts of inventor Tim Jenison to duplicate a painting by Johannes Vermeer. …

Maybe Donny and Marie Osmond get credit for time served. Or perhaps it just doesn’t cost that much to change a sign. Either way, the singing siblings announced Wednesday that the Flamingo showroom will be named in honor of them, even if they agreed to extend the show only another year. (Not to say they wouldn’t extend again, but they are guaranteed through 2014.)

The two have been Flamingo headliners since 2008. …

They couldn’t have thought of this when Burt Convy was still alive? When Charo was a little younger?

Better late than never, I guess, for Australian producers trying to bring a musical version of “The Love Boat” to the Strip.

Specifically, David Jacobsen and father Kevin are adapting the beloved TV show’s source novel, “The Love Boats,” by Jeraldine Saunders. They hope to land the musical here in about 15 months, “subject to when another show wraps up” at the casino they’ve been talking to, says David, the executive producer of the project.

The Jacobsens feel this is the right title to go straight to Las Vegas (after a workshop production) in a 100-minute version rather than trying to establish “legitimate” credentials on Broadway.

“No one says: ‘We think you’re mad. Why are you going to Las Vegas?’ We can’t all be that crazy. We all feel the same,” David Jacobsen says.

“We see this as a fun, broad, entertainment show with a lot of music. And it’s going to be very edgy, unlike the TV series that had to dumb it down.” …

Cavaretta, 60, is still in action. She was part of the Flying Cavarettas who opened Circus Circus and were featured under the big top there for 23 years. …

Finally, a belated note about the passing of Gia Maione Prima in Florida on Sept. 23.

Keely Smith was the most famous spouse of lounge legend Louis Prima. But Gia, who died at 72, was well-known to Las Vegas locals in the 1960s and 1970s, both as a singer and the mother of Louis Jr. and Lena Prima. Both now carry on their father’s legacy as entertainers.

Prima and Smith divorced in 1961, and Maione became his band’s new singer and stage partner the next year. She married Prima in Northern Nevada in February 1963, and they remained married until his death in 1978.