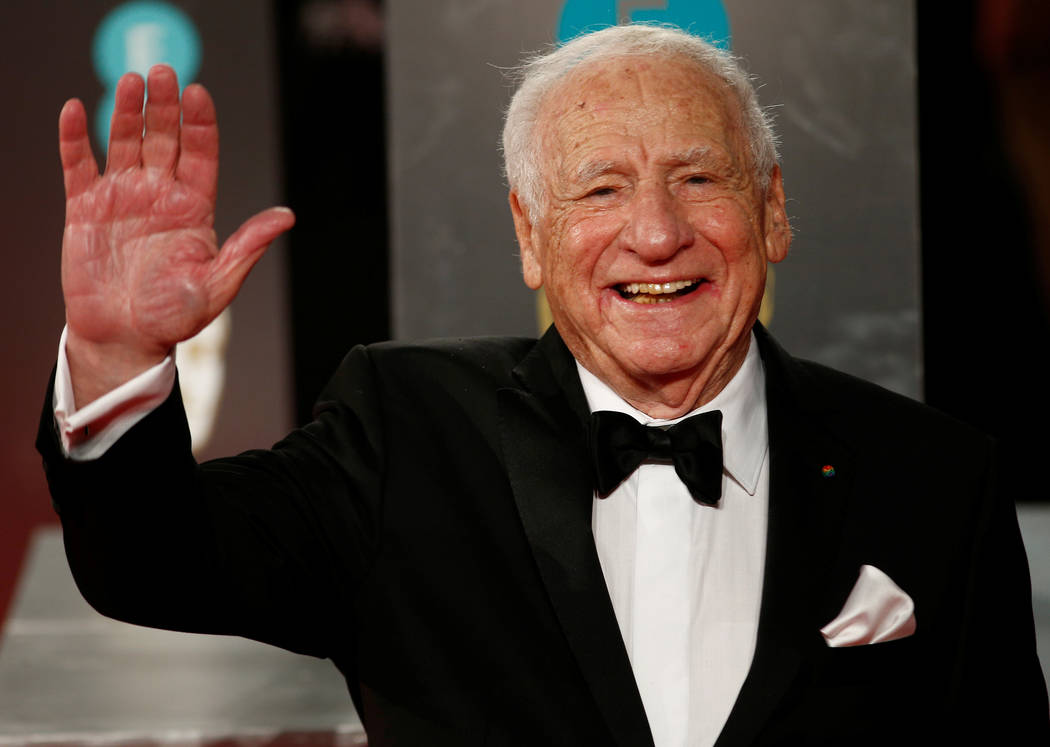 Mel Brooks was a brand before we called people that.

From “Blazing Saddles” on, Brooks’ name was above the title of his movies, and his face was usually somewhere on the poster. He hasn’t lost the knack for self-promotion that’s more endearing than obnoxious.

In a recent phone chat, the comedy legend stressed the price of procrastination, or thinking you can just walk up and buy tickets on the night of his June 30 and July 1 shows at Wynn Las Vegas.

“I just came back from the Chicago Theatre,” where he hosted a screening of “Young Frankenstein” for a capacity crowd. Same with “Blazing Saddles” at Radio City Music Hall last fall. “I’m not bragging,” he says. “There’s going to be a crush for any seats that are open.

“I’m warning you to warn the crowds: This is not casual. If there’s a little old lady in front of you buying a ticket, knock her to the ground. Get that ticket. And then be very nice. Help her up, apologize and say what a fool you were.”

He may have a point. Brooks turns 91 on June 28, but he has never performed in a Las Vegas casino. “I’ve never been on a floor on a Vegas stage. It’s about time,” he says.

The closest he came was when the Broadway musical version of “The Producers” played at Paris Las Vegas from early 2007 to early 2008. Brooks came to town to promote it and monitor previews.

But “The Producers” arrived a little late in its touring career and was seriously damaged by cuts to get the running time down to 90 minutes. To add insult to injury, “Jersey Boys” moved into the same theater and ran for eight years at a two-hour length, with only modest cuts.

“We were experimental,” Brooks says. “And they were really terrified to keep people away from the tables for so long.”

The shows at Wynn will be a hybrid of the film screenings and Brooks’ 2015 “Live at the Geffen” concert filmed for HBO. That one was more of a theatrical performance. In Las Vegas, he will draw upon that live memoir but also show film clips and field questions.

Brooks is on a very short list of comic performers from his era who did not work Las Vegas showrooms. (There’s Bob Hope, and … then you really have to start putting some thought into it.)

“I was making movies, always kind of busy, and Carl was doing this thing called ‘The Dick Van Dyke Show’ (which started the same year, with Reiner as creator and co-producer). He was unconscionably busy. I mean, he just worked day and night. So we never took it anywhere. We’d go locally to the Hollywood Palace and do it there.”

Brooks worked on the screenplay for the 1961 Jerry Lewis comedy “The Ladies Man,” now remembered more for its elaborate dollhouse set than for the content. (Brooks ended up uncredited.)

Lewis was headlining the Sands and brought Brooks to town to collaborate by day. “They let him be a dealer, but only on a $5 table so he couldn’t give away the place,” Brooks recalls.

It was common practice — and good publicity — for Rat Pack-era headliners to step behind a blackjack table and thrill the players by dealing a few hands.

“Jerry, genius that he was, was just as funny being a blackjack dealer for no money, just for fun — splitting cards all over the place, throwing chips — as he was when he was on stage getting paid for it. He was a natural.”

Lewis told Sands boss Jack Entratter to make sure he got anything he wanted, any table limit. “He cost me a few thousand dollars,” Brooks recalls with a laugh. “It was ridiculous.”

But Brooks’ place in Las Vegas was always in the audience. He witnessed rare performances by Marlene Dietrich and Noel Coward that are now the stuff of Vegas legend.

“I love Las Vegas, I really do,” he says. “The vibe, that’s the word. There’s nothing like the Vegas vibe. It’s unique. It has its own vibe. You can walk from one hotel to another and there’s always something different. A different sight, a different smell, a different look. It’s just a great place.”

Brooks volunteers that in “Blazing Saddles,” “I have one moment that’s very Vegas. Count Basie blasting ‘April in Paris’ in the desert with Cleavon Little riding by. It was very Vegas.”

I venture that there was another, telling him my review for Wynn’s “ShowStoppers,” which played in the same room where he will perform, cited the “French Mistake” and blamed Brooks for ruining my ability to take chorus boys in top hats seriously.

“I’m glad I did,” he says, seeming genuinely happy to hear it. But before he goes, one last reminder.

“My warning to you is my warning to them. Don’t get mad. Get (tickets) while they’re getable.”